Is this the end of hockey fights?

The NHL may tighten restrictions on in-game fisticuffs, but it'll face stern resistance from violence-loving fans 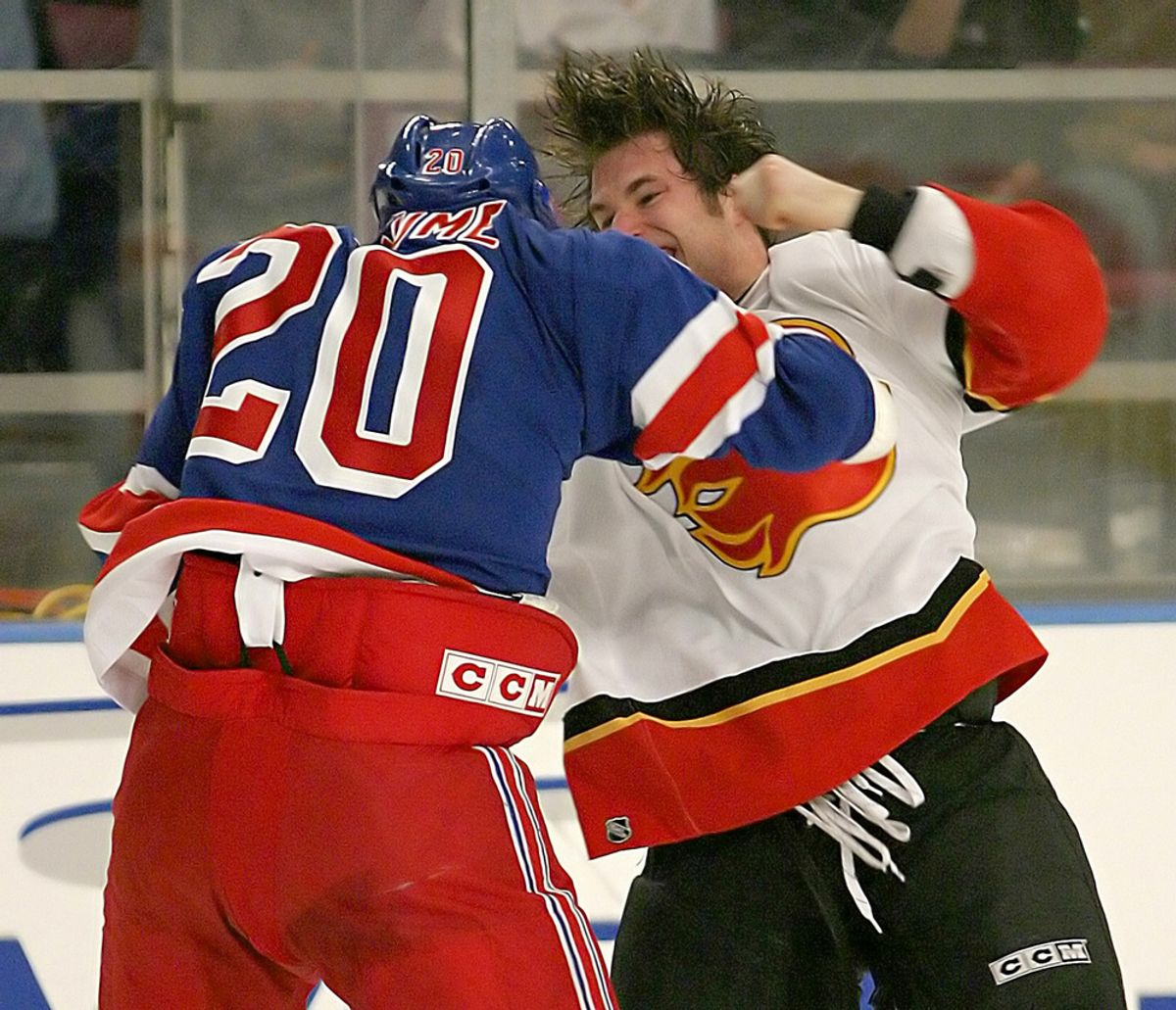 If I had to pick, I’d say earliest memory as a sports fan was watching Bruins enforcer Andrei Nazarov bloody (now deceased) NHL strongman Bob Probert, a Blackhawk at the time. "Probie," as NHL and hockey fight enthusiasts referred to him as, was slogging at the tail end of his career, but he was still one of the most respected pugilists in the game.

As a naïve 11-year-old still exploring how I wanted to craft myself as a sports fan, Nazarov's beatdown on Probert astonished me. When I watched him latch onto opponents in the past, I didn't expect much. But when I saw the boyish-looking Russian uncharacteristically pump his left hand twice into Probert's forehead, forcing blood to gush out of it that settled above Probert's eyes and sprinkled all over Nazarov's jersey, I felt exhilarated, hooked on hockey and its fights. Of course after his initial salvo against Probert, Nazarov proceeded to bury his head into the hardened veteran's chest and tie Probert's arms down for the rest of the fight.

It was a typical Nazarov bout, but with a spectacular beginning that changed the way I would view sports.

As Chicago and Boston squared off in the Stanley Cup Finals, I was reminded of the most discernible difference between playoff and regular season hockey: despite the palpable rise in the physicality of play, no one really fights in the playoffs.

With minutes at a premium, getting sent off for five of 'em is an unsettling proposition that players --especially skilled ones-- seriously mull over before peeling off their mitts. Plus, no one wants to get an instigator penalty or an unsportsmanlike conduct for any of the unsavory things that happen when gargantuan men toss their gloves aside and have at it like a parking lot brawl at a Florida Applebee's.

What ends up happening in the playoffs is a lot of shoving, "face washes," gloved punches and all sorts of verbal jabs that NBC would rather not have us hear, making the skirmishes akin to what the NFL now offers: constant sizzle, but few flames.

But during the regular season, even if the NHL has been toying with the idea of nixing fighting from the league—or at least dreaming of the possibility to protect its hide from future head injury lawsuits—the on-ice donnybrooks do -- and will continue to -- go on.

In my first season watching the Bruins full-time (I was 11), I soon learned that Nazarov had gained a reputation as a horrible fighter, a monster of a Russian (6'5, 230) who would drop his gloves and immediately grab onto his opponent using a bear-hug and throw only short noogies to the back of his opponent's head. This tendency for kindergarten wrestling match made Naz's ferocious showing against Probert all the more surprising.

One of Nazarov's linemates on the Bruins that year was P.J. Stock, who quickly became my favorite hockey player. Stock was a fighter, the opposite of Nazarov; with a tiny frame (about 5'10) and quick fists. There was no defense in Stock's fights. Many of his battles are considered all-time greats by hockey fight fans and mainstream analysts of the sport. Some say his 2002 tilt against the Washington’s Stephen Peat is the best hockey fight of all time. The two players went back and forth throwing with reckless abandon for a little over 30 seconds. In the end, according to a graphic Sportscenter included in the highlight, the two combatants hurled 71 punches at each other. On Youtube, one user calls the punch up the "best fight ever recorded." That particular video has over two million views.

Nazarov and Stock quickly became my heroes, and hockey fights my favorite part of any sport. That year, 2001, I changed my AOL screenname to "naz724" and then to "bigEStock." I even got a "P.J. Stock Crew: Ass Kicker" shirt, which I was not allowed to wear to school, my parents said.

Every night the Bruins played, I sat down in my basement, on an uncomfortable futon I repeatedly told my parents I wanted them to get rid of, eagerly awaiting a hockey fight. Goals from Jason Allison and Sergei Samsonov were great, of course, but I liked it more when Stock, Nazarov or even Joe Thornton (who fought quite a bit as a young Bruin) threw down.

My fascination with hockey fights peaked when I started 7th grade and joined a hockey fight forum online. The website was called Fried Chicken's Hockey Fights. It still exists today and looks very similar to how it did when I was 12—a big list of umbrella threads like "current fighters," "NHL fight recaps," "enforcer hall of fame," "movies," "politics," and many more.

I lied and listed my age as 20 on Fried Chicken's, which members referred to as "FC." The diehard posters seemed to know the basics about the each other, which is what I gave out. If anyone asked, which they rarely did, I told them I was a college student in Boston. Posters were from all over—Buffalo, California, Sweden—and seemed to run the career gamut. Some were lawyers, others construction workers and one well-regarded member claimed to be a member of the Hollywood entertainment industry.

On FC I posted mainly fight recaps from the Bruins games, which I was eager to chime in about. Usually I would rush onto the computer and try to be the first to post a description and declare a winner. A fight between two heavyweight rivals could receive hundreds of comments in what amounted to a rambling argument between guys throwing jabs at each other from behind their keyboards. While the posters generally acted diplomatically towards one another, carrying on what functioned as an old-boys network, fight descriptions often got heated, with the slightest disagreement leading to an all-out, ad-hominem digital brawl.

FC certainly had plenty of keyboard warriors and senseless jabbering, but it was a good place to learn the hockey fight game. These guys knew their stuff. Even if they were sitting somewhere in their parents basement discussing a hockey fight from 1982, they could school any newbie on the game, which I needed. In the three years I spent lurking in the cyber shadows at FC, I built the foundation of my encyclopedic knowledge of hockey fights.

When I was 12, or 15, or even 19, I took the absolutist, Don Cherry-Mike Millbury approach to hockey fights: fights belong in the game, no matter what any softee says. You were a pansy if you thought differently, ignorant of the biggest threat to our love: European guys in visors who didn't score that many goals and took up fourth line space from our favorite enforcers, like Georges Laraque, Wade Belak or Stu Grimson.

Now, I see things differently. While I'm still a devoted hockey fight fan, I'm beginning to understand pugilism's place in hockey is passe at best and untenable in the grand scheme of things.

The rationale for a hockey fight has always existed in a hazy vortex, a belief that pointed use of punctuated violence staves off more extemporaneous and pernicious violence. Take a run at my star player, and you're going to have to deal with my enforcer next shift. It’s an antiquated, almost primordial barter system that never made much sense to begin with. It may promote some on-ice accountability, but there will always be hits on superstars in a game that's built around them handling the puck while the other team tries to pry it away. It should be up to the league to eradicate dirty hits -- which it has made immense strides in doing -- not the players' self-policing. Hockey players may simply need to adapt and handle their differences in an alternative manner.

The first casualties have been enforcers. While in-game fights are still common (this shortened season, hockeyfights.com—not to be confused with hockey-fights.com —estimates that there were 347 bouts, which ticks in at .48 fights per game, up from .44 last year) the big bruising (read: plodding) enforcers with no real skills beyond hard fists and harder heads are slowly trickling out of the league, with only a few like Brian McGrattan, Colton Orr, John Scott, and Patrick Bordeleau remaining. In their place, "middleweights" have taken on their lion share of the fights, players like Jared Boll, Cody McLeod, Tim Jackman and B.J. Crombeen. The latter two are essentially human punching bags that lose most of the fights they're involved in, but they are all smaller and more agile than the hulking enforcers, ready and able to provide valuable checking-line services.

And as the “fighters” are pushed out of the league by evolution, and as the NHL cracks down on dirty hits in attempt to tell civilized society that it's serious about cleaning up its game and protecting NHL players, the idea that league-sanctioned brawling will continue into perpetuity seems unlikely. Deflecting accusations that your league is complicit in causing brain trauma gets much harder when you part of your game involves giving players the opportunity to wail away on one another.

This year referees have been quicker to stop fights before they start (without getting swung on themselves) and break them up long before they become three minute marathons. In the media, many have been extremely vocal about ending "staged" fights—scraps that take place off of faceoffs with seemingly no precursor. An appropriately loud uproar was heard in March when Maple Leafs enforcer Frazer McLaren knocked out non-enforcer David Dziurzynski of the Senators in one such fight. Dziurzynski probably took the fight not to look like a coward, and got a concussion for his troubles. After Dziurzynski went down with a head injury, which has quickly become the most feared ailment in sports, a slew of hockey writers called for the abolition of staged fights.

"…staged fights aren’t a reaction to the actual game. They’re only about show business or energy or intimidation or toughness. That’s it," the always well-reasoned and insightful Nick Cotsonika wrote for Yahoo Sports.

The hockey establishment as a whole has felt the tide rushing in on them when it comes to fighting. In one major junior hockey league, the Ontario Hockey League (OHL), where the some of the world's best hockey talent cuts its teeth, and also where 17-year-olds learn how to fight, league officials have instituted a quota system for fighting this year. Any player with more than 11 fights receives a two-game suspension once he reaches that threshold. For each fight the players participates in after receiving the aforementioned suspension, he gets another two-game ban. If he accrues 16 fighting majors, he'll receive another two-game suspension and his team will be fined $1,000.

NHL senior vice president Colin Campbell, once a feared on-ice pugilist himself, told Scott Burnside that quotas had been mentioned in past NHL general manager meetings. "We’ll be watching closely," Campbell told ESPN. "It will be interesting to see how it works."

Did the quota system work? According to dropyourgloves.com, there were 491 regular season fights this year in the OHL, down from 637 last year and 674 the year before. As it stands, junior players in the OHL are certainly fighting less, but they're still doing so with frequency. Another major NHL feeder, the Western Hockey League, also took steps to curb fighting by implanting a rule this year that banned staged fights after the faceoff. The league had 674 regular season fights this year, down from 799 last year.

While more restrictions and penalties are incrementally pecking at fighting in the junior leagues, the NHL remains hesitant about tinkering with practice adored by fans and owners. As the call to address head injuries in the major sports league grows louder and louder with every concussion and early though, the NHL may have no choice but to seriously consider if it's time to banish the practice of fighting in hockey.