Best of the worst: Right-wing responses to the court

UPDATED: Mike Huckabee, Michele Bachmann and a host of others aren't handling the SCOTUS rulings all too well 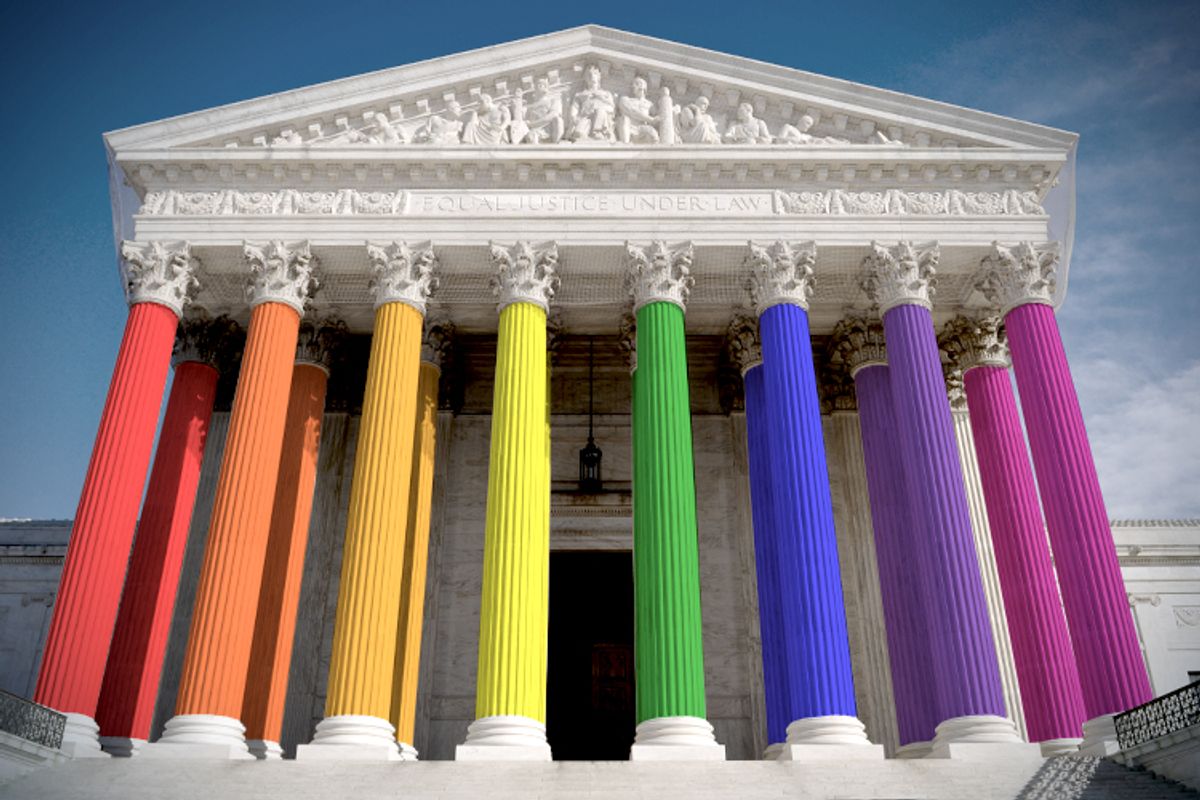 In the immediate wake of the Supreme Court's rulings striking down the Defense of Marriage Act and Proposition 8 in California, the right-wing media remained relatively silent. At around 11 this morning, National Review led with a piece on President Obama's "radical climate agenda." Over at the Weekly Standard Bill Kristol was on the news with "Comprehensive immigration reform? Just say no."

The National Organization for Marriage didn't appear to have updated its site, focusing instead on suing the IRS and a "major victory" for marriage supporters" in Illinois, a comparably minor incident that happened last month. The professional homophobes over at the Family Research Council were similarly mum. [Ed.: They've now responded. See below.]

It's almost as if the right collectively realized that fighting marriage equality is not a winning issue in the 21st century. If so we wouldn't have anything to post. But they didn't completely disappoint.

Before the rulings arrived, the always reliable Bryan Fischer of the American Family Association called on states to ignore pro-family rulings from the Court:

And a post on RedState.com managed to find a thin silver lining to the rulings:

It is vitally important to note that in neither decision, the Court declared that there is a constitutional right to same sex marriage. In the Perry decision authored by Roberts, he was joined by Scalia, Breyer, Kagan, and Ginsburg, which makes for an extremely weird line-up. In short, they ruled pretty much as expected although the alignments are a little askew. One would expect this issue to revisit the Court as challenges against laws in states that have banned same sex marriage or defined marriage in the traditional sense crop up. In short, they put off the bigger questions for another day behind a veil of legalese.

Michele Bachmann was also predictably quick to speak up, as quoted in the Washington Post:

“Marriage was created by the hand of God. No man, not even a Supreme Court, can undo what a holy God has instituted,” said former congresswoman Michele Bachmann (R-Minn.). ”What the Court has done will undermine the best interest of children and the best interests of the United States.”

The only responses that really matter at all came from the high bench. Here are a few passages from Justice Scalia's dissent to the DOMA decision:

The Court is eager—hungry—to tell everyone its view of the legal question at the heart of this case. Standing in the way is an obstacle, a technicality of little interest to anyone but the people of We the People, who created it as a barrier against judges’ intrusion into their lives.

In the majority’s telling, this story is black-and-white: Hate your neighbor or come along with us. The truth is more complicated. It is hard to admit that one’s political opponents are not monsters, especially in a struggle like this one, and the challenge in the end proves more than today’s Court can handle. Too bad. A reminder that disagreement over something so fundamental as marriage can still be politically legitimate would have been a fit task for what in earlier times was called the judicial temperament. We might have covered ourselves with honor today, by promising all sides of this debate that it was theirs to settle and that we would respect their resolution. We might have let the People decide.

But that the majority will not do. Some will rejoice in today’s decision, and some will despair at it; that is the nature of a controversy that matters so much to so many. But the Court has cheated both sides, robbing the winners of an honest victory, and the losers of the peace that comes from a fair defeat. We owed both of them better. I dissent.

What Windsor and the United States seek, therefore, is not the protection of a deeply rooted right but the recognition of a very new right, and they seek this innovation not from a legislative body elected by the people, but from unelected judges. Faced with such a request, judges have cause for both caution and humility.

The family is an ancient and universal human institution. Family structure reflects the characteristics of a civilization, and changes in family structure and in the popular understanding of marriage and the family can have profound effects. Past changes in the understanding of marriage—for example, the gradual ascendance of the idea that romantic love is a prerequisite to marriage— have had far-reaching consequences. But the process by which such consequences come about is complex, involving the interaction of numerous factors, and tends to occur over an extended period of time.

We can expect something similar to take place if samesex marriage becomes widely accepted. The long-termconsequences of this change are not now known and are unlikely to be ascertainable for some time to come.

The other, newer view is what I will call the “consentbased” vision of marriage, a vision that primarily defines marriage as the solemnization of mutual commitment— marked by strong emotional attachment and sexual attraction—between two persons. At least as it applies to heterosexual couples, this view of marriage now plays a very prominent role in the popular understanding of the institution. Indeed, our popular culture is infused with this understanding of marriage. Proponents of same-sex marriage argue that because gender differentiation is not relevant to this vision, the exclusion of same-sex couples from the institution of marriage is rank discrimination.

The Constitution does not codify either of these views of marriage (although I suspect it would have been hard at the time of the adoption of the Constitution or the Fifth Amendment to find Americans who did not take the traditional view for granted). The silence of the Constitution on this question should be enough to end the matter as far as the judiciary is concerned. Yet, Windsor and the United States implicitly ask us to endorse the consent-based view of marriage and to reject the traditional view, thereby arrogating to ourselves the power to decide a question that philosophers, historians, social scientists, and theologians are better qualified to explore.

Watch this space for dissent to the Prop 8 case.

Perhaps the most vocal voice against marriage equality in this country has been Maggie Gallagher. She responded to both rulings this morning:

Kennedy’s decision is not law, it is Justice Kennedy’s moral values written into our Constitution, and interfering with our rights as Americans to pass laws that accord with our values on marriage.” Kennedy’s decision is the Roe v. Wade of this generation, not this generation’s Brown v. the Board of Educations,” said Gallagher, “Like Roe, stepped in to disenfranchise millions of voters’ concerns to tilt unfairly the scale of justice controversial moral issue trending in a liberal direction. But like Roe the deep questions involved in marriage will not simply go away: At the heart of the gay marriage argument is an untruth: unions of two men or women are not the same as unions of husband and wife; The law cannot make it so, it can only require us to paint pretty pictures to cover up deep truths embedded in human nature.

The Supreme Court has just abandoned 7 million voters, giving us no justice and no access to the courts.. The California Supreme Court made it clear that the proponents of Prop 8 are delegated the right to defend the law if state official refuse to do so. But after accepting standing in DOMA because. . .well because it wanted to, the majority of the Supreme Court justices simply punted unable to recognize a clear injustice in kicking out of court people who have devoted thousands of hours to the democratic process –and $3 million to the defense of the law–that the Court today treats as beggars with no interest in the outcome.
The good news is that Judge Walker’s decision has no precedential value. Marriage advocates now must look for a new way to get back in court to overturn his aggressive decision that marriage is rooted in hatred and bigotry, not as we understand it: in the love of husband and wife who can be mother and father to their children.

Responses from the predictable groups are coming in. Here's the National Organization for Marriage:

The National Organization for Marriage (NOM) today expressed dismay and outrage at the US Supreme Court's actions to dismiss Proposition 8 on procedural grounds, and for invalidating a key element of the federal Defense of Marriage Act (DOMA). The group called the decision "illegitimate" and that it will be rejected by tens of millions of Americans, and demanded that Congress continue to protect the right of states to reject same-sex marriages performed in other states or countries.

...The case was heard by a homosexual judge in San Francisco who himself was engaged in a long-term same-sex relationship. To nobody's surprise, the judge invalidated Proposition 8. This decision was upheld by the Ninth Circuit Court of Appeals in an opinion written by liberal judge Stephen Reinhardt, despite the fact that Reinhardt's wife advised the plaintiff lawyers in this very case. Reinhardt refused to recuse himself from the case.

"There is a stench coming from this case that has now stained the Supreme Court. They've allowed corrupt politicians and judges to betray the voters, rewarding them for their betrayal. It's an illegitimate decision. We and millions of other Americans will refuse to accept this rogue decision rewarding corruption. " Brown said.

"While we are disappointed in the Supreme Court's decision to strike down part of the federal Defense of Marriage Act (DOMA), the court today did not impose the sweeping nationwide redefinition of natural marriage that was sought. Time is not on the side of those seeking to create same-sex 'marriage.' As the American people are given time to experience the actual consequences of redefining marriage, the public debate and opposition to the redefinition of natural marriage will undoubtedly intensify.