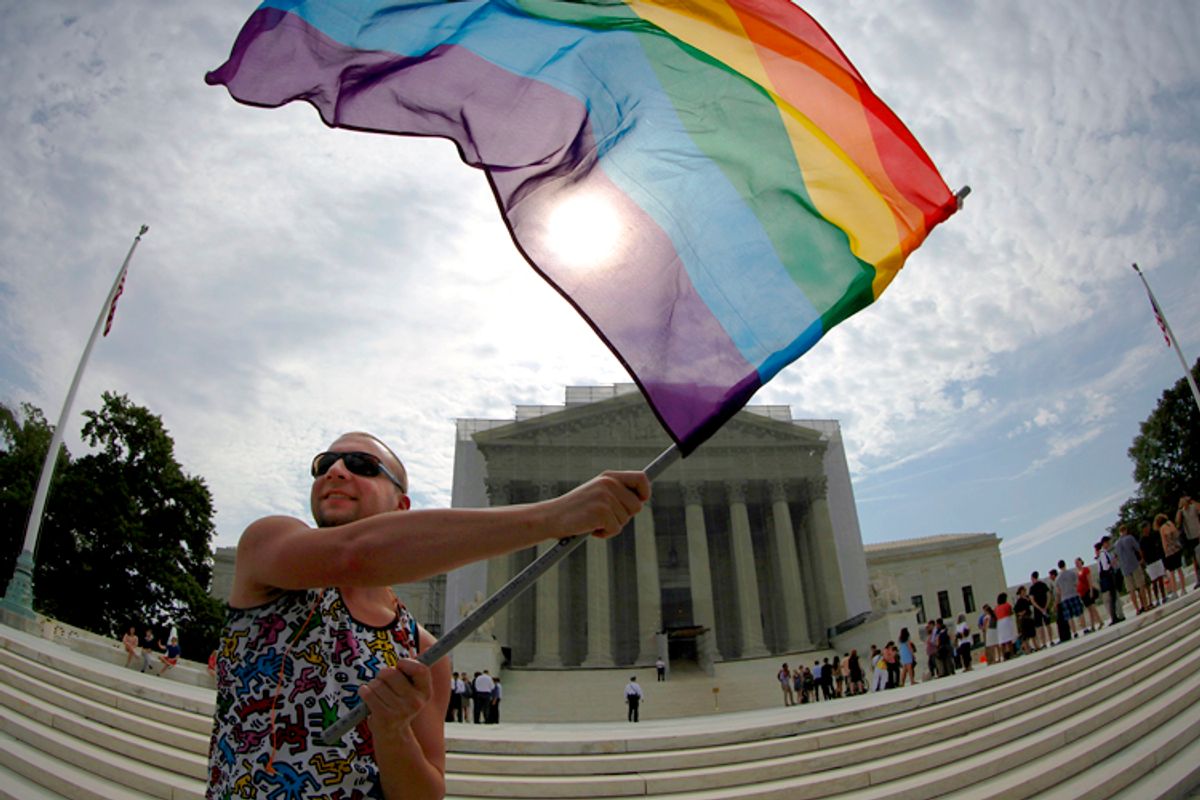 The Supreme Court has ruled on the two highly anticipated same-sex marriage cases before it, holding that DOMA is unconstitutional, but declining to rule on the merits of California's Proposition 8 on the grounds that sponsors of the law had no standing to bring the case.

In a 5-4 decision, the Supreme Court struck down the Defense of Marriage Act, holding that the law is unconstitutional under the equal protection component of the Fifth Amendment.

Justice Anthony Kennedy writes in the majority opinion that the law, which defines marriage as between a man and a woman for the purposes of receiving federal benefits, "is unconstitutional as a deprivation of the equal liberty of persons that is protected by the Fifth Amendment."

"The Constitution’s guarantee of equality 'must at the very least mean that a bare congressional desire to harm a politically unpopular group cannot' justify disparate treatment of that group. In determining whether a law is motived by an improper animus or purpose, '[d]iscriminations of an unusual character' especially require careful consideration. DOMA cannot survive under these principles," Kennedy writes.

"The class to which DOMA directs its restrictions and restraints are those persons who are joined in same-sex marriages made lawful by the State," he continues. "DOMA singles out a class of persons deemed by a State entitled to recognition and protection to enhance their own liberty. It imposes a disability on the class by refusing to acknowledge a status the State finds to be dignified and proper."

Chief Justice John Roberts and Justice Antonin Scalia, in the dissent, argued that the Court had no jurisdiction to rule on this case. Scalia, who called the decision "jaw-dropping," wrote that "It is an assertion of judicial supremacy over the people’s Representatives in Congress and the Executive. It envisions a Supreme Court standing (or rather enthroned) at the apex of government, empowered to decide all constitutional questions, always and everywhere 'primary' in its role."

Clarence Thomas and Samuel Alito were also in the dissent.

For the time being, as Adam Liptak of the New York Times writes, this means that "The decision will immediately extend some federal benefits to same-sex couples, but it will also raise a series of major decisions for the Obama administration about how aggressively to overhaul references to marriage throughout the many volumes that lay out the laws of the United States."

In another 5-4 decision, the Supreme Court ruled that it has no jurisdiction to rule on the merits of California's ban on same-sex marriages known as Proposition 8, thus vacating the Ninth Circuit's ruling that the law violates the Equal Protection clause of the Fourteenth Amendment, and sending the case back to the lower court with instructions for the appeal to be dismissed.

The law was passed by ballot initiative, and challenged as unconstitutional in federal District Court in California. But after the District Court ruled that the law is unconstitutional, officials in California declined to continue defending it. Sponsors of the ballot measure stepped in and appealed, and the California Supreme Court held that under state law they had standing to do so. The Ninth Circuit considered the sponsors' standing under state law to resolve the question of their standing under federal law, and upheld the District Court's decision that the law violates the Equal Protection clause.

On Wedneday, the Supreme Court ruled that the backers of the ballot measure did not have standing to appeal the District Court's decision, and therefore the Ninth Circuit did not have jurisdiction to rule on the case. The Ninth Circuit's decision was vacated, and the case was sent back to it with instructions to dismiss the appeal.

In the majority opinion, Chief Justice John Roberts wrote: "We have never before upheld the standing of a private party to defend the constitutionality of a state statute when state officials have chosen not to. We decline to do so for the first time here."

Shortly after the ruling came down, Gov. Jerry Brown said that he has ordered state officials to begin issuing marriage licenses once the Ninth Circuit gives the go-ahead. “After years of struggle, the U.S. Supreme Court today has made same-sex marriage a reality in California. In light of the decision, I have directed the California Department of Public Health to advise the state’s counties that they must begin issuing marriage licenses to same-sex couples in California as soon as the Ninth Circuit confirms the stay is lifted,” Brown said in a statement.

But, as Marty Lederman of SCOTUSblog explains, there might be a legal hitch since "district court judges generally do not have the power to issue injunctions that protect persons other than the parties before them, absent a class action or a case in which a broader injunction is necessary to ensure that the plaintiffs receive complete relief." As the Los Angeles Times reports, supporters of Proposition 8 have said that they might attempt to fight extending the right to marry to any couples beyond the parties in the case. From the Times:

Gay rights lawyers say they are confident any effort to limit Walker’s decision will fail. They note that district judges have often issued sweeping injunctions affecting millions of people.