It's only a little menstrual blood!

"Menstrala" is a growing art form, but many still express repulsion at the sight of a woman's period on canvas 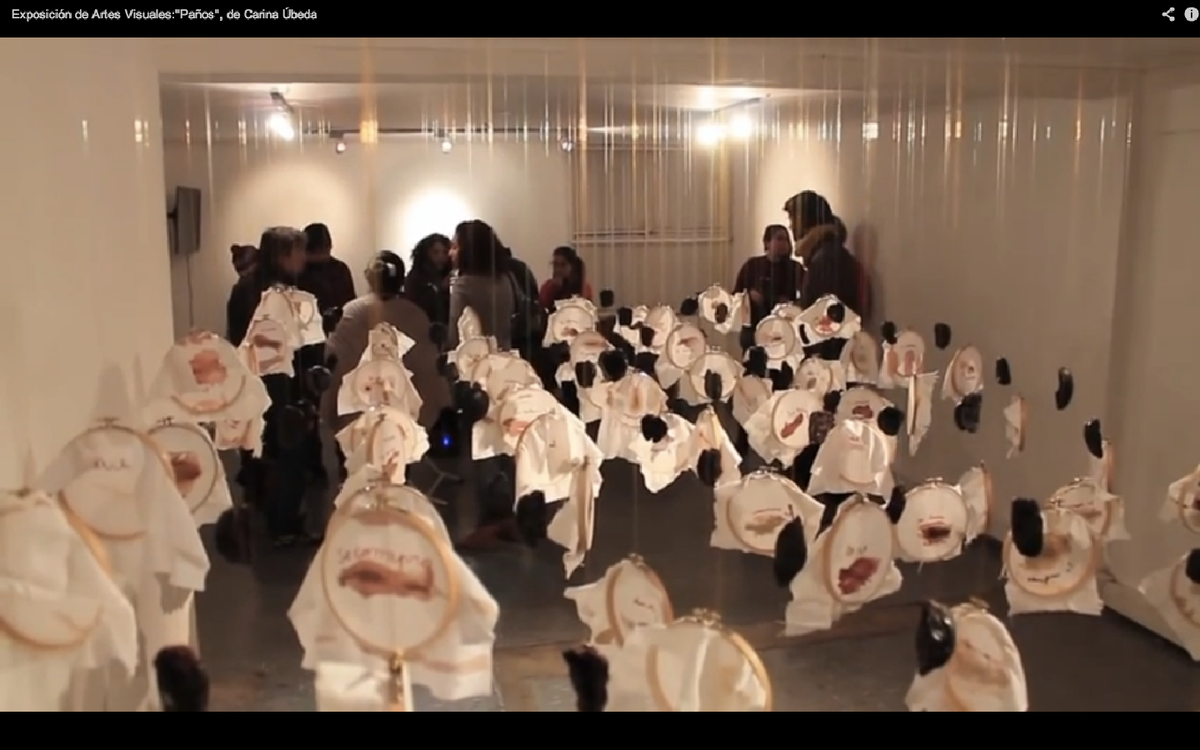 Art school grad Carina Úbeda Chacana unveiled her exhibition, Cloths, at the Center of Culture and Health in Quillota, Chile late last week and it was composed of a display of five years of her own menstrual fluid along with dangling apples meant to represent her ovulation. As part of the hanging display, Chacana stitched the words “Production,” “Discard,” and “Destroyed” below each of the stains.

While art world watchers are probably not surprised by the concept or the execution, the mainstream world still reacts with shock at the thought that anyone would consider menstrual blood or a woman’s menstrual cycle the subject or material for art.

London’s Daily Mail published one of the first stories about the show in the English-speaking world and their commenters seem outraged, with one Floridian commenter with the handle redhigheels55 exclaiming: ”Not art! Just disgusting and scary to think that the public would go for something so nauseating.”

Gawker’s Neetzan Zimmerman went one step further than the Daily Mail article and titled his post, “Woman Puts Five Years of Menstrual Blood on Display at ‘Art Show’,” using scare quotes around the all important term ‘art show’ — it isn’t really art, he seems to suggest in his typical boorish style.

Others were even more repulsed, but on the internet, where people can comment under a perceived veil of anonymity, that’s not very surprising.

What many people may not realize is that there’s a long history of female artists, I have to admit that I don’t know a single male artist in this category, who use menstrual blood in their art. In fact, there’s even a name for it nowadays, Menstrala. The term was coined by artist Vanessa Tiegs and has been adopted by a few bloggers and Livejournal groups, though has yet to cross over into mainstream acceptance.

The topic has even been the subject of reviews, essays, discussions, and art history. Last month, writing in Guernica, EJ Dickson explained the expected responses to Menstrala:

If you look on the Internet at menstrual artists’ websites, the negative responses to their work generally fall into one of two camps: people either find it disgusting and unhygienic, or they think it is hippy-dippy feminist nonsense.

I asked Dickson why she thought many people continue to be repulsed by the notion of Menstrala:

I guess I understand why some people would be squeamish about menstrual art, just as they’d be squeamish about artists using other bodily fluids (urine, semen, etc.) in their work. What I don’t understand is why menstrual art produces such a uniquely visceral response, particularly in men. When I told my male friends I was reporting this piece [on Menstrala for Guernica], they all reacted with abject disgust, even though a lot of these dudes were art history nerds and were familiar with Andres Serrano, Damien Hirst, the Italian dude who canned his own shit whose name I forget, etc. This was in stark contrast to my female friends, who mostly responded with a mixture of curiosity and even awe (like “wow, I wish I was brave enough to do that”).

I think people continue to be repulsed by menstrual art because menstruation is one of the last taboos in our culture. For some reason (I’m betting on sexism), people are totally OK with having every other bodily function out in the open (I’m thinking of the dog semen-eating scene in Van Wilder specifically, but I’m sure I could find more culturally relevant examples, but the concept of women bleeding out of their vaginas assaults our delicate sensibilities. Nobody wants to hear about it, let alone see it. And women who do menstrual art are thrusting it in people’s faces and forcing them to see it. Which is not to say that I think all menstrual art is good, or even important. But you have to admit, it’s pretty ballsy.

So, here we are again, confronted with sexism that allows us to watch a 2002 film of a frat brother eat dog semen as comedy gold but menstrual fluid continues to gross people out. When Piero Manzoni packaged his feces into cans in the 1960s or when Warhol urinated on paintings in the 1970s or 80s, the shock eventually dissipated, but women using menstrual fluid continues to raise eyebrows even though it has been going on for decades.

In 1972, Judy Chicago’s “Menstruation Bathroom” installation featured a bin overflowing with bloodied menstrual products, it was part of a generation of works that probed feminist ideals of women’s art, women’s lives, and the blurring of the boundaries between private and public. Fastforward 40 years and simply being a woman and revealing the natural processes of the female body continues to be a revolutionary act in some circles. The fight for women to assert their bodies on their own terms as a central subject continues.

The evolution of art that uses menstruation fluid has not been a smooth road, Dickson explains the perception quite succinctly in her Guernica essay:

When Chicago’s piece was first exhibited, menstrual-themed art was considered subversive, an innovative way of bringing a social taboo to the forefront of cultural conversation. Yet it has since acquired a reputation as a pretentious gimmick, intended solely for shock value. The satirical Wikipedia website Encyclopedia Dramatica, for instance, has an entry on menstrual painting, calling it “the practice where women paint shitty, terrible pictures … and get asspats for being liberated.” Menstrual art’s reputation as an amateurish gimmick was cemented with the 2001 cult film Ghost World, in which a dippy art teacher (Ileana Douglas) praises a dimwitted student’s final piece, a tampon in a teacup. “It’s a response to a woman’s right to choose, which is something I feel super-strongly about,” the student cheerily says.

People’s discomfort with menstrual blood is well documented, and it may have even been the cause of Victorian art critic John Ruskin’s divorce to his wife Effie Gray, and Pliny the Elder’s reference to it in his Natural History: A Selection makes you wonder if he ever even saw any:

“Contact with [menstrual blood] turns new wine sour, crops touched by it become barren, grafts die, seed in gardens are dried up, the fruit of trees fall off, the edge of steel and the gleam of ivory are dulled, hives of bees die, even bronze and iron are at once seized by rust, and a horrible smell fills the air; to taste it drives dogs mad and infects their bites with an incurable poison.”

In Lauren Rosewarne’s book Periods in Pop Culture: Menstruation in Film and Televisionshe outlines that there’s a “general cultural imperative to keep menstruation hidden, there is an even more specific demand to keep it hidden from men” (italics hers). She also explains, early in her book, that psychologists acknowledge that the experience is shrouded in secrecy for women but some are quick to point out that the concealment is a reinforcement of the stigmatization of menstruation. Hence, many pop cultural references — and even art works like Chicago’s, I might add — that deal with the topic of menstruation relegate the bodily function to the bathroom, which is a space that is often gendered and segregated. More recent work, at least in the art world, often removes the connotation of a bathroom into a more neutral space like the gallery’s white box — is this part of the coming out of Menstrala into a more public space?

While in pop culture menstruation is often mentioned, usually in a negative light, it is noticeable that menstrual blood is seldom present. The presence of blood can even be perceived as dangerous, as this Russian Tampax commercial suggests:

In contrast to its absence in pop culture, in the art world, menstrual blood tends to be front and center in discussions of menstruation. Perhaps it is our culture’s fascination with making the hidden processes of the world transparent or our need to examine what others choose to ignore. As artist Vanessa Teigs explained in an interview, “Menstrala simply reminds us that menstrual blood is not invisible, not to women. Menstrual blood is the only blood that is non-violent.” She goes on in another interview to explain that some research suggests our reactions to menstruation are more deep seeded than we might realize and that the words ritual and taboo both derive from the bodily function (“ritual come from r’tu, meaning menstruation in Sanskrit and the word taboo comes from tapua, meaning sacred in Polynesian.”).

Maybe these Menstrala artists know that there is power in revealing something that is considered mysterious, and only when the shock is gone will people simply get over it.