Which public officials have shown guts -- or expediency -- in the fight for equality. Now includes Justice Kennedy! 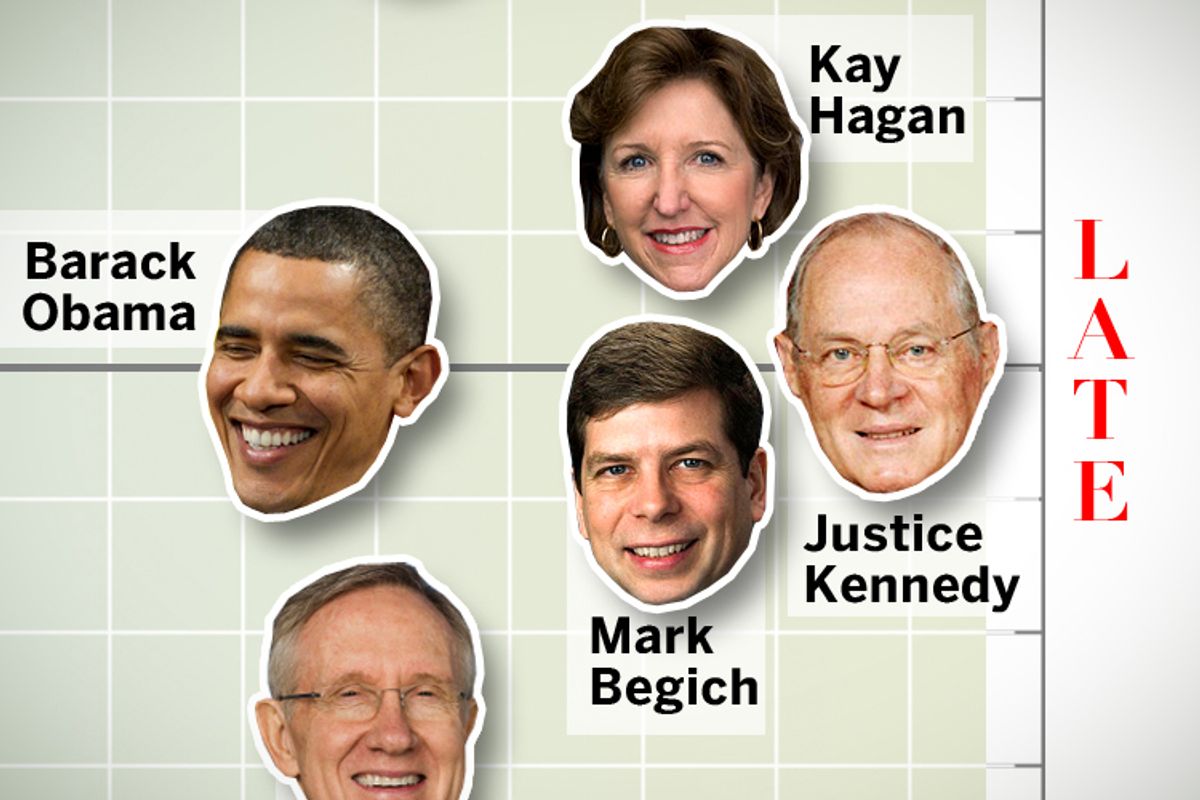 When Supreme Court arguments were heard in March on Proposition 8 and the Defense of Marriage Act (DOMA), political leaders exhibiting varying degrees of courage lined up to announce their support of marriage equality. Some just came off of reelection, meaning they wouldn't face voters for six years. One was a Republican prompted to change his position by his gay son. And still another was a former secretary of state abstaining from the political fray until recently, and suddenly finding herself following the party she once sought to lead.

In response -- with a tip of the hat to New York magazine's "approval matrix" -- we presented our gay marriage "courage-meter." On the x-axis is timing -- who was ahead of the curve, and who came to the party late. The y-axis represents who showed guts and risked political capital for their support.

With Justice Anthony Kennedy casting the decisive vote to strike down DOMA today, we updated the courage-meter and added him to the chart. Below the meter is a short legend with background on the selections. Suggestions? Disagreements? Take to the comments section (and click on the courage-meter to enlarge it)! Former Sen. Bob Kerrey (D-Neb.) - A red-state senator to vote against DOMA, he also supported gay marriage in his losing 2012 race for Senate (1996)

Sen. Barbara Boxer (D-Calif.) and Sen. Dianne Feinstein (D-Calif.) - Voted against DOMA, from a blue state but one that would later support Proposition 8 (1996); Boxer was closer to facing reelection.

Sen. Bernie Sanders (I-Vt.) - The socialist then-congressman was fairly entrenched in his at-large House seat when he voted against DOMA (1996)

Former Gov. Eliot Spitzer (D-N.Y.) - Running for attorney general in 1998, announced his support for marriage equality before other statewide officials in his state (1998)

Vice President Dick Cheney - Expressed support for his gay daughter's right to marry before many others; did not publicly push ticket or party to endorse position (2004)

Gov. Jerry Brown (D-Calif.) - As attorney general, asked court to invalidate Proposition 8 after it was voted through by his state, said he wouldn't defend it in court (2008)

Former President Bill Clinton – Endorsement of marriage law in New York came before other national figures evolved, but well after he served in office (and signed DOMA) (2011)

President Barack Obama – The first president to endorse marriage equality, and did so during election year; however, followed his vice president, and an early-career reversal on the issue (2012)

Hillary Clinton (former secretary of state) - An open question as to when she might have supported it had she not been secretary of state (and abstained from certain political discussions); announcement in 2013 bore no risk (2013)

Sen. Rob Portman (R-Ohio) – Was first GOP senator to come out for gay marriage, after his son Will came out to him (2013)

Supreme Court Justice Anthony Kennedy -- The swing vote on the Court casts the decisive vote to strike down DOMA -- at a time when most Americans support marriage equality.