On Wendy Davis' filibuster (and, in a way, on DOMA), social media showed mainstream news what it couldn't ignore 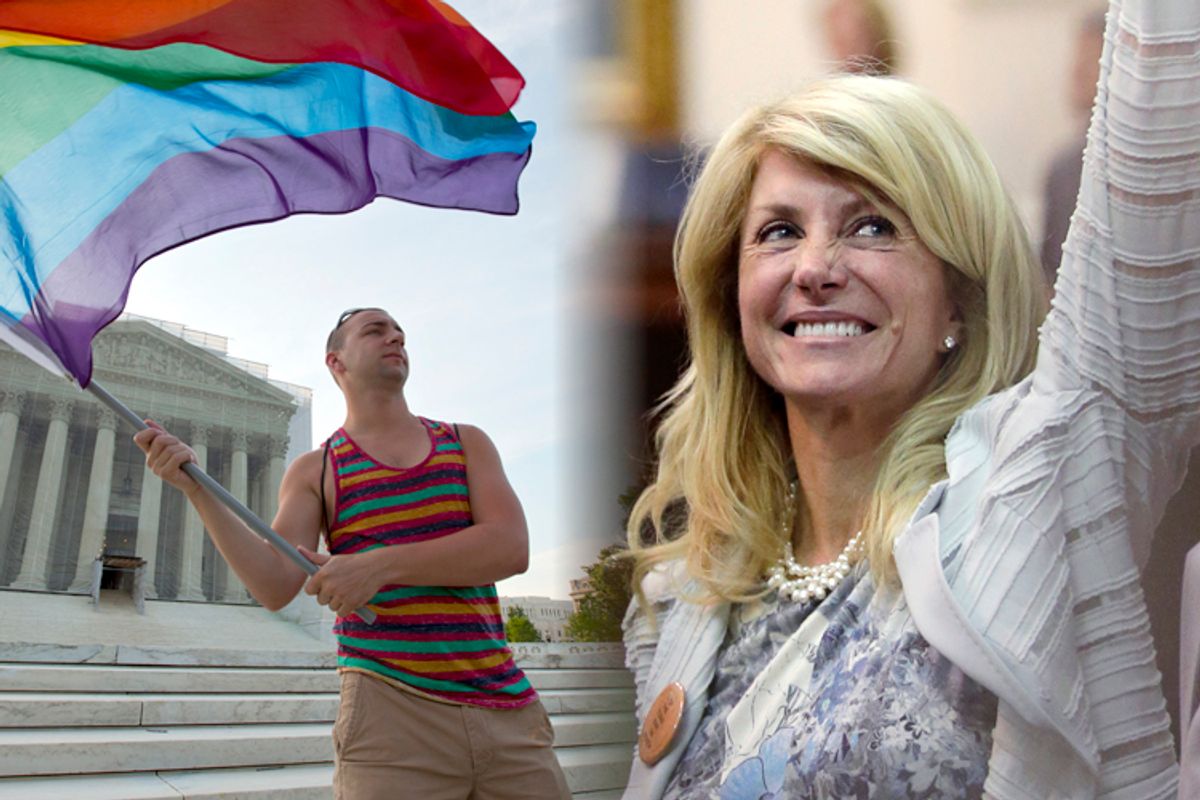 On Tuesday, June 25, Sen. Wendy Davis of Texas stood for nearly 13 hours without food or drink, without rest, without leaning, without the ability to use the restroom, to filibuster Senate Bill 5 (SB 5), a legislative measure that would have closed 37 of the 42 abortion clinics in Texas, the largest state in the contiguous United States. Interested people from around the country, nay, the world, were able to watch this filibuster and the political maneuverings of those who tried to stop it, via a livestream on YouTube — one watched, at times by more than 180,000 people.

The filibuster was a gripping spectacle that kept me rapt for hours. On Twitter, people were able to offer support, however symbolic, for Sen. Davis’ efforts. There was a sense of community. For some levity, I couldn’t help remarking on Sen. Davis’ flawless hair, several hours into her ferocious stand.

Near midnight, after some intense and partisan efforts to derail Sen. Davis’ efforts, the impassioned crowd in the gallery began shouting and cheering, letting the senator know she did not stand alone. It was a sound of women fighting for their reproductive freedom in the only way they could: with their voices. I will never forget that sound. It awoke something in me I hadn’t realized had gone dormant.

And why were so many of us watching this amazing set of events happen on a YouTube stream? Because none of the major news networks, not one, carried or covered the last hours of the filibuster. The gap between old and new media yawned ever wider.

That, however, is not where this story begins.

The reason I knew anything about what was going on in Texas was thanks to the efforts and boundless energy of Jessica W. Luther (@ScATX), a Texas activist who has been sharing information about SB 5 for weeks. I don’t know her personally but we became connected online some time ago. I’ll be honest — at first, I was completely clueless about what was happening in Texas. At times, I thought, “I do not have the energy to care about this.”

Luther was so committed, though, and so full of passion and good information, that I started to care. I started to pay attention. I read the articles and commentaries she shared and began to understand what was at stake not just for women in Texas but for all American women. I was reminded that change sometimes does begin with one person who raises her voice.

And there I was, last night, watching a YouTube livefeed of a state Senate filibuster, something I never thought I would do.

Social media is a curious thing. On the one hand, it offers an endless parade of ephemera from the daily lives of friends, family and strangers — discussions of a fondness for yogurt, a picture of a barista’s decoration in latté foam, descriptions of excellent meals, pictures of pets and small children or maybe an abandoned easy chair on a crowded street corner. There’s all manner of self-promotion and relentless affirmation. There are knee-jerk, ill-informed reactions to, well, everything. The abundance of triviality is as hypnotic as it is repulsive.

But there are times when social media is anything but trivial. During Hurricane Sandy, social media allowed public officials along the Eastern corridor to disseminate information about available resources, evacuation routes, and provide updates on the storm. Social media allowed community members to offer information and assistance and human connection through small, grass-roots networks. Certainly, there were flies in the ointment as people of questionable moral stability spread rumors and began, with astonishing speed, to develop fraudulent schemes, but for the most part, social media was used to accomplish some good.

I cannot think of a significant event from the past three years I did not first learn about via Twitter: the midnight shootings in Aurora, Colo., the massacre at Sandy Hook elementary, the uprisings across the Middle East during Arab Spring, the activities of the Occupy movement, the 2012 presidential election, the shooting of Trayvon Martin and ensuing debacle, the fertilizer plant explosion in West, Texas, the bombings at the Boston Marathon, and on and on the news goes.

When these major news stories are breaking, there's always a significant difference between what's being shared via social media and what major news outlets are covering. That difference becomes more pronounced and more pathetic with each passing day.

Good journalism takes time that social media, which advances at a breathtaking pace, rarely affords. Good journalists need to verify information before they can report it. They need this time because, in the best of all worlds, we’re supposed to trust that they are offering us accurate, unbiased information. But even after they’ve applied the necessary rigor to their profession, journalists from major news outlets still seem like they can't keep up -- or, perhaps, it's that they won’t keep up.

On Tuesday, June 25, Sen. Wendy Davis stood and fought for reproductive freedom in her state and the networks were largely silent. MSNBC offered some coverage earlier in the evening, but during the last few hours, the news networks, the 24-hour news networks created for this very purpose, were silent. They reported inaccurate information when they bothered to report at all. The next morning, CNN anchor Chris Cuomo referred to the efforts of Davis and Texas men and women who held vigil with her as “odd politics at work,” and before that suggested, “Why not spend the time trying to compromise and figure out the bill in the first place?” as if reproductive freedom is simply a matter of compromise. He was dismissive and negligent, a frustrating combination of incompetence.

When journalism is working effectively, and it often is, I appreciate having journalists explain what I might not understand or know enough about.  An Internet connection does not make me, or anyone, an expert on culturally significant events. Smart journalistic perspective would have been useful to many people as Sen. Davis spoke. Instead of being able to turn to news, though, people were on Twitter and elsewhere across the Internet, researching parliamentary procedures of the Texas Legislature, sharing the most significant moments of the night, and holding the Texas Senate accountable when they tried to break their own rules even though they were in plain sight. Average people with Internet connections did the work we used to trust major journalism outlets to do.

Smart journalistic perspective was useful earlier on June 25, when the Supreme Court, in an appalling 5-4 decision, struck down Section 4 of the Voting Rights Act, essentially disenfranchising too many voters of color, rural voters, elderly voters and impoverished voters. It was useful to see what people were thinking about that decision across social networks, but it was even more useful to read and watch well-considered reporting about a topic I don’t know much about. It was more useful to be informed than to assume the responsibility of having to inform.

Today, that same Supreme Court overturned the Defense of Marriage Act and dismissed California’s Proposition 8 appeal, offering one step forward after innumerable steps back. Again, social networks were active, mostly with jubilation (or not, depending on whom you consort with). The Twitter discussions about DOMA provided a useful reminder that the institution of marriage can and should be critiqued as we move forward with marriage equality. There were discussions about the implications for gay and lesbian couples in binational marriages and the financial benefits the wedding industry will reap from this decision. Social networking broadened the conversation.

The news networks have covered these decisions on marriage equality fairly robustly. They’re also covering the George Zimmerman trial and the ongoing intrigue involving Edward Snowden and Paula Deen’s damage control. There is no shortage of news, and there never has been. We live in a big, messy world.

Social networks are more than just infinite repositories of the trivial, snap judgments or convenient outlets for mindless joy and outrage. They are more than the common ground and the solace we may find during culturally significant moments. Social networks also provide us with something of a flawed but necessary conscience, a constant reminder that commitment, compassion and advocacy neither can nor ever should be finite.