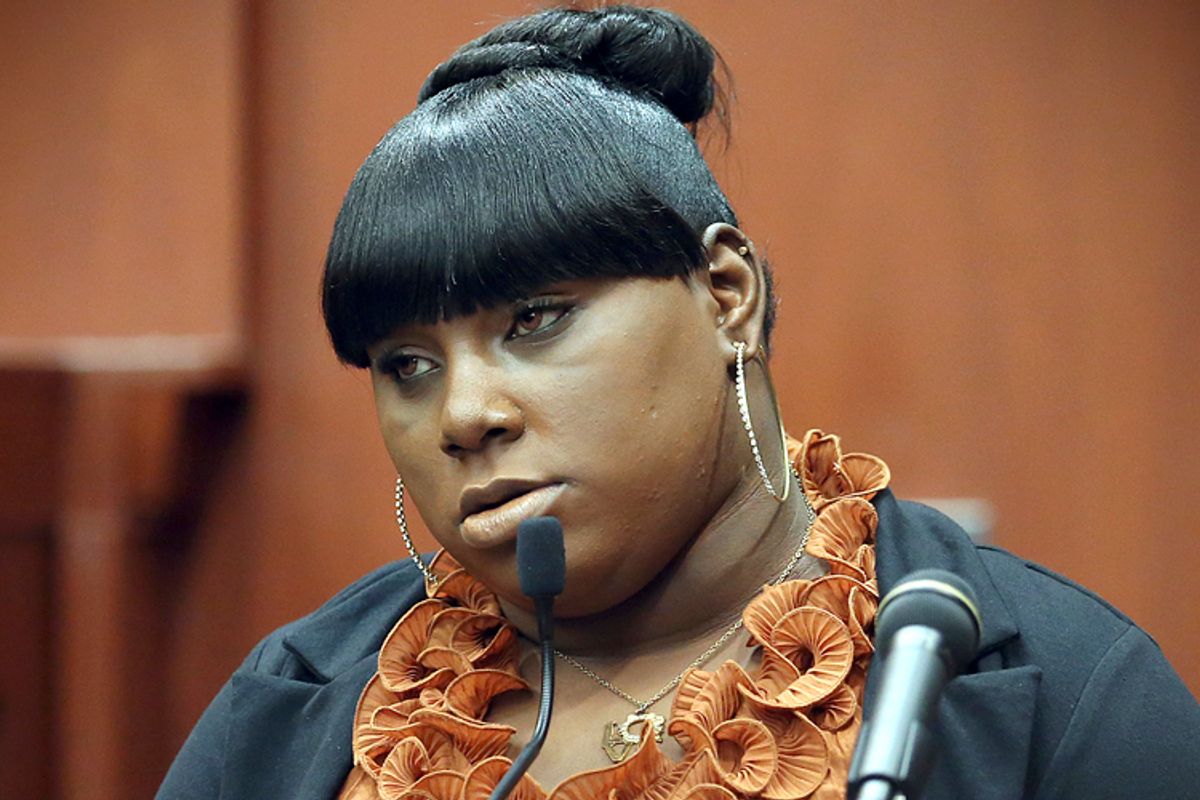 Finally people on the right have begun to see that there may be an aspect of racism at the heart of the Trayvon Martin case – and predictably, it’s against accused killer George Zimmerman.

On Wednesday prosecution witness Rachel Jeantel, who was on her cellphone with Martin while he was being pursued by Zimmerman, actually testified that Martin told her he was being followed by “a creepy ass cracker." But it wasn’t until Thursday that it blew up the right wing of the Internet – when Jeantel offered the badgering defense attorney Don West her opinion that the term isn’t racist.

From Glenn Beck’s the Blaze to the Breitbots to smaller right-wing shriekers to Twitter trolls everywhere, white grievance-mongers seemed less bothered by the fact that Martin allegedly used the term, than by Jeantel saying it wasn’t a slur.

For the record: I have been known to say “Jesus Christ on a cracker,” and I want to make clear I am not praying for the Son of God to jump a white person.

My God, don’t these people get tired of themselves? So much of the trumped-up racial upset on the right, generally, is about language: If black people can use the N-word, why can’t we? (Even Paula Deen tried to use that as self-defense at first.) Now we’re moving on to: If the N-word is racist and forbidden, words like “cracker” should be, too.

But “cracker” has never had the same power to demean, or to exile, or to sting. No social order has ever been devised whereby African-Americans oppress people they deride as “crackers.”

We don’t even really know where the term comes from. I’ve seen it suggested that enslaved black people invented it because of the “crack” of the slavemaster’s whip, but it was used by planter class elites to describe the hardscrabble Scots-Irish dating back to the late 18thcentury. (Both meanings could be true.) If it’s demeaning at all -- and some white Southerners have embraced it -- it derives from white-on-white snobbery. But like most discussions of white class distinctions in this country, this one will be preempted ... because black racism!

Still, I’m not sure why Zimmerman defense attorney Don West zeroed in on Martin’s use of the term, or even less relevant, what Jeantel thought it meant. (For the record, she seemed to focus on the “crazy ass” part and said she thought Martin was trying to describe a “pervert” pursuing him, which is why she said she told him to run away.) Those shocked by the fact that she didn't see a racial slur in Martin calling Zimmerman “cracker” might note that she also said her friend told her “the nigga is behind me,” right before Zimmerman caught up to Martin. Maybe that proves Martin is the real racist!

On the week that the Supreme Court gutted the Voting Rights Act because we’ve supposedly come so far in eradicating racism, there’s a perverse kind of political poetry in the outcry on the right over the use of the word “cracker” here. Let’s remember: a white and Latino man is on trial for killing a young black man, in a clash that began because the white/Latino man thought the black man was hanging around someplace where he didn’t belong, looking “like he’s up to no good.” But let’s freak out over the victim reportedly describing the accused as a “cracker.” Crackers, please ...