From Stonewall to the death of DOMA: A look back at gay rights in the U.S. 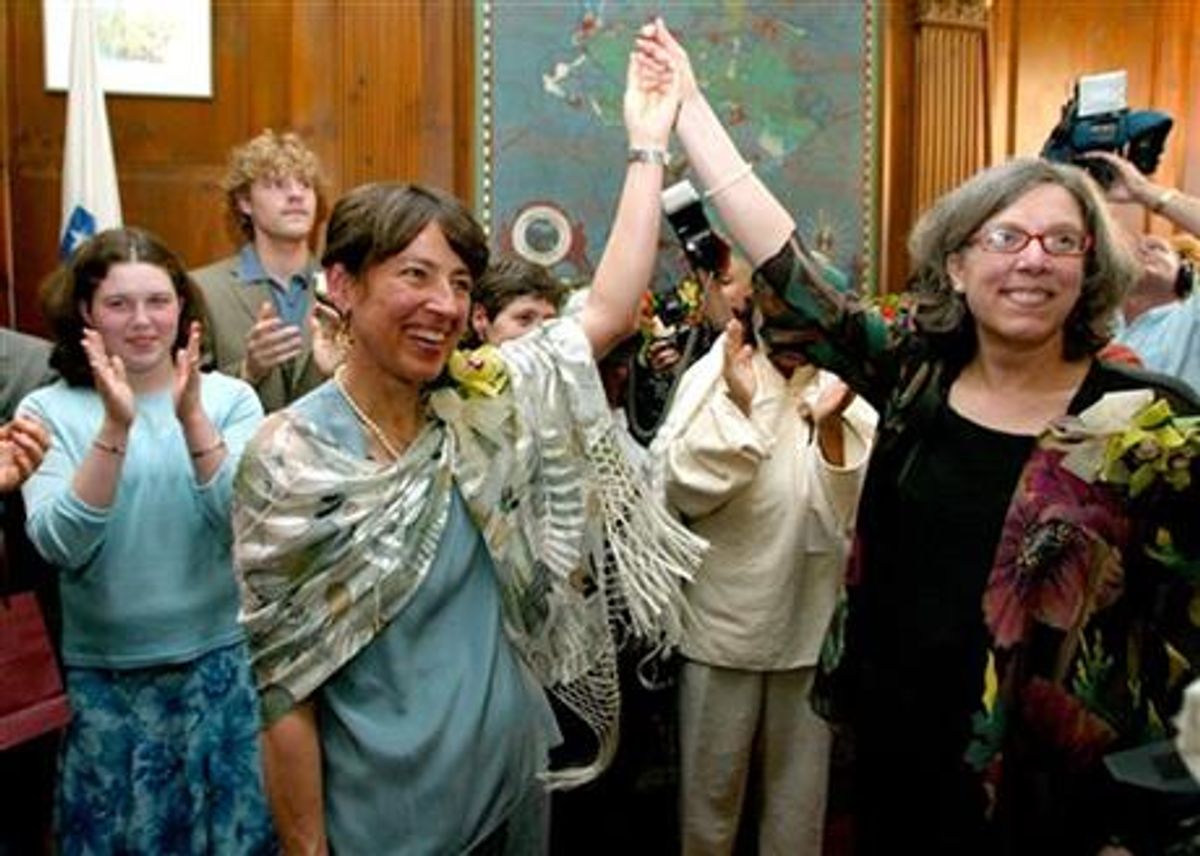 WASHINGTON (AP) — From Stonewall in New York in 1969 to the marble walls of the Supreme Court, the push to advance gay rights has moved forward, often glacially but recently at a quickening pace. A look at episodes in the modern history of that movement and how attitudes have changed along the way in the larger culture:

Fifty years ago, gay sex was a crime in almost every state, homosexuality was designated a mental disorder, federal workers could easily lose their jobs for being gay and only the outliers were out of the closet, a risky if not dangerous place to be.

Gay marriage is legal in a dozen states and the District of Columbia, and could soon be again in California after the court's ruling Wednesday.

Gays can serve openly in the armed forces and do so in high office, including Congress. Eight people who have served as a U.S. ambassador or been nominated for that post are openly gay. Openly gay entertainers are commonplace, athletes less so.

It can still be dangerous to be out of the closet, which is why Congress expanded federal hate-crimes legislation in 2009 to cover crimes motivated by bias against gays, lesbians and transgender people. The law is named after Matthew Shepard, a gay college student tied to a fence, beaten and left to die in a 1998 case that sparked hate-crimes laws around the country.

The Supreme Court turned a stone cold face to Frank Kameny in 1961, declining to hear his appeal after he was fired as a government astronomer for being gay. It did so again in 1970, dismissing an appeal by two men in Minnesota who fought for the right to marry. And in 1986, the court upheld a Georgia law criminalizing sodomy, part of a patchwork of laws around the nation that once made gay sex a crime coast to coast.

The tide began to shift in the 1990s. In 1996, a ruling by the high court opened an avenue for states to protect gays as a class against discrimination. It struck down a Colorado measure that sought to bar homosexuals from gaining protections that are extended to other groups based on their race or religion.

In 2003, 10 years to the day before Wednesday's rulings, the Supreme Court stripped away the taboo at the heart of gay relationships, ruling that consensual sex between adults was not a crime so state sodomy laws could not stand. The court reversed its ruling of 17 years earlier on the Georgia law, and Justice Antonin Scalia, in a pointed and seemingly prophetic dissent, predicted it would clear the way for same-sex marriage.

Two years before his death in 2011, Kameny received an apology from the government for firing him. The apology came from John Berry, then director of the Office of Personnel Management, now nominated as ambassador to Australia, himself openly gay.

The rulings Wednesday extend federal recognition to gay marriages in the states where they are legal and seem bound to add California back into that category. But they leave same-sex marriage prohibitions standing in 35 states — 29 under state constitutions, six under state laws — and the overarching question of marriage equality as a national right unresolved. Two states, New Mexico and New Jersey, neither approve nor ban gay marriage.

IN THE COURT OF PUBLIC OPINION

In 1996, when the Defense of Marriage Act became law, the University of Chicago's General Social Survey reported that 60 percent of respondents considered homosexual sex "always wrong." With political opinion closely tracking public sentiments in that election year, the ground was hardly fertile for something as far-reaching as gay marriage.

In September of that year, the Senate backed DOMA and its prohibition of federal recognition of same-sex gay marriage by a lopsided 85-14 vote, and later that month President Bill Clinton signed it. Although he said he didn't like the law, he made clear — as did almost everyone else in both parties — that he considered marriage to be a union between a man and a woman.

That was the prevailing bottom line in Washington right up until last year, when President Barack Obama endorsed gay marriage in a flip-flop that he called an evolution.

Separately in 1996, a bill to establish anti-discrimination measures in the workplace for gays failed, though the vote was much closer.

Grim as the picture appeared then for gay rights activists, there were signs of a slow thaw in public attitudes. A few years earlier, fully 75 percent frowned on gay sex in the Social Survey. In 1996, more people thought extramarital sex was wrong than opposed gay sex.

Social scientists found that Americans were more open to a situation or a behavior when it was distant from their daily lives. So support for employment equality was stronger for the gay airline pilot than for the grade school teacher, stronger for gays in the armed forces than for gays adopting children, stronger for domestic partnership benefits in the workplace than for the right of a gay couple to get an apartment in your building.

Public attitudes have changed dramatically — and in part for reasons that turn out to be close to home.

An Associated Press-National Constitution Center poll in the fall found 53 percent favored legal recognition of same-sex marriage and 63 percent favored granting gay couples the same legal benefits straight couples had. Other polls, too, pointed to a switch to majority support for gay marriage. In March, the Pew Research Center, which pegged support for marriage equality at 49 percent, found that support had grown in large measure because more people knew someone who was gay — a family member, friend or acquaintance. Familiarity had bred acceptance.

What became known as the gay liberation movement traces its roots to the 1969 police crackdown of patrons at the Stonewall Inn gay bar in New York City and three days of riots that followed. Also in 1969, a U.S. Court of Appeals ruling barred the firing of civil servants solely because they were gay.

In 1973, the American Psychiatric Association declassified homosexuality as a mental disorder.

The decade saw the first openly gay people elected to public office as well as the election of other officials committed to the cause. In the 1980s, the spread of AIDS and its devastating toll among gay men galvanized calls for action, not just to control the epidemic but to redress the absence of legal protections for gays who could not visit their partners in hospital rooms, attend their funerals or keep shared possessions after death.

The election of a Democratic president in 1992 held out the promise of a change in course for gay activists frustrated by the years of Ronald Reagan and George H.W. Bush. But Clinton was not about to upend the social order.

As a leader promoting a "third way" somewhere between the usual politics of the left and the right, Clinton took measured steps on gay rights, perhaps most notably his compromise on gays in the military. The "don't ask, don't tell" policy that allowed gays to serve as long as they weren't open seemed to please no one on either side — though for such an unpopular step, it survived a long time.

The pace of federally financed AIDS research picked up; Clinton established an AIDS policy office in the White House.

More politicians began supporting the recognition of same-sex civil unions while drawing a line against marriage equality. But a court case through the early 1990s in Hawaii, in which three same-sex couples fought for the right to marry, prompted a rush to the ramparts by opponents of gay marriage and set the stage for enactment of the law barring federal recognition of such unions.

That law and the swirling circumstances around it were a catalyst for action for supporters and opponents alike.

In 1998, Hawaii voters overwhelmingly approved a constitutional amendment giving lawmakers the power to deny same-sex marriage, making the court case irrelevant. Thirty other states would pass amendments against gay marriage in years to come. Among them: California, where the ability for gays to marry is expected to be restored because of the Supreme Court ruling.

In 2010, a court struck down Florida's three-decade-old ban on adoptions by gays.

In 2011, Obama ended the Clinton-era compromise in military policy by opening the forces to people who are openly gay.

In 2012, voters approved same-sex marriage in Maine, Maryland and Washington state. This year, Rhode Island, Delaware and Minnesota are coming on board.

Because of the Supreme Court's action Wednesday, 30 percent of Americans will live in states recognizing same-sex marriage once California legalizes it.

That's a long journey in time, and attitudes, from Stonewall 44 years ago. But these are far from the final steps for either side.