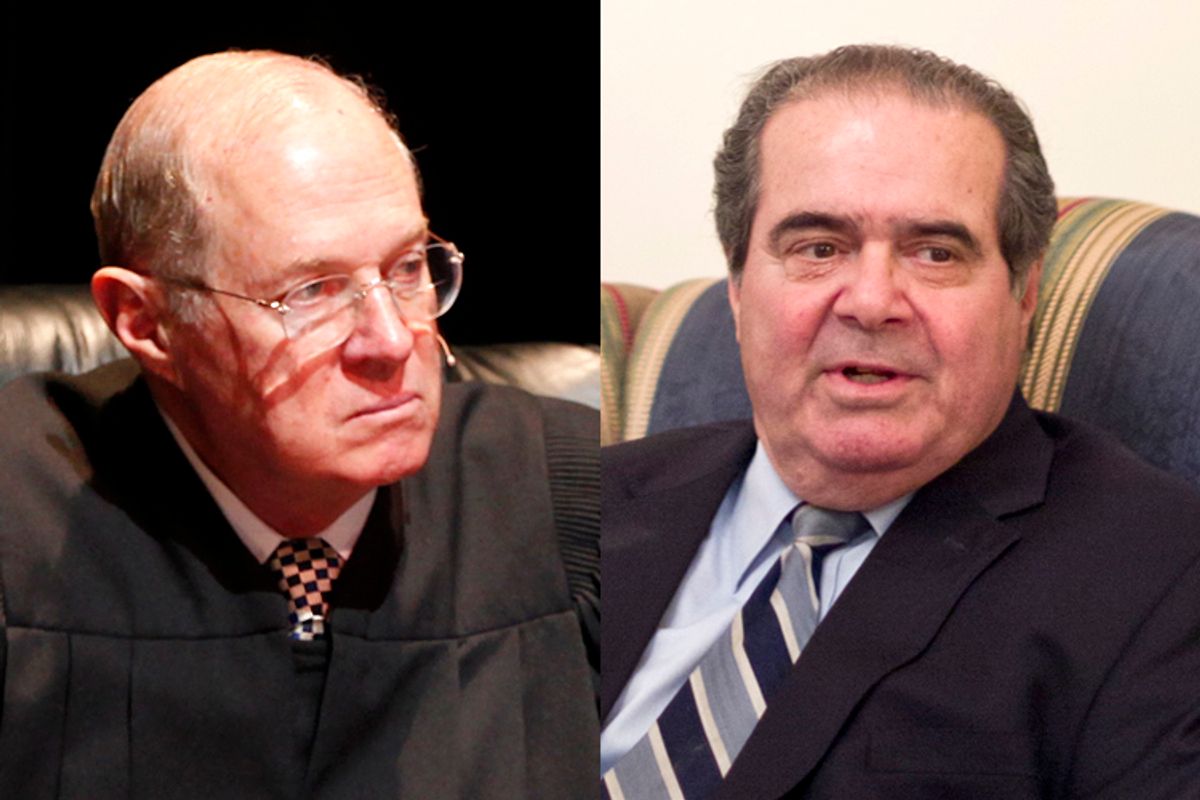 Reading the Supreme Court’s opinions in the same-sex marriage cases felt like watching a couple of crazy old uncles bicker. I’m a law professor, and I’ve been reading Supreme Court opinions for years. Justice Anthony Kennedy, who wrote the majority opinion striking down the Defense of Marriage Act, was his typical self: bloviating, self-important, irritating even when he’s right about everything just because he’s so damn pleased with himself. Antonin Scalia, who dissented, also did not disappoint: a snarling, grumpy old man, full of viciously funny one-liners.

Don’t misunderstand me: This was a great day. Same-sex marriage came to California, and DOMA, a stupid, nasty law, is history. The Court acted well. But the judges’ opinions leaven the heroic tale with some comic relief.

DOMA declares, in pertinent part, that the word "marriage," wherever it appears in the U.S. Code, "means only a legal union between one man and one woman as husband and wife." The rule applies indiscriminately across all federal laws, producing some weird results. Federal ethics rules bar officials from participating in matters in which their spouses have a financial interest — but not if they're same-sex spouses. It is a federal crime to assault, kidnap or kill a member of the immediate family of a federal official in order to influence or retaliate against that official — but not if you do that to a same-sex spouse. Ditto Social Security, federal pensions, taxation of inheritances (which was the issue in today's case), and over a thousand other provisions.

Justice Kennedy had no trouble recognizing this for what it is: a "bare desire to harm a politically unpopular group." The statute lashes out at same-sex couples with no attention at all to the purposes of any of the underlying laws it affects. The Constitution's guarantee of equal protection was enacted with precisely that kind of law in mind.

DOMA was enacted by huge majorities in 1996. But that was a time when gay people were still the objects of pervasive and, more important, unquestioned prejudice: A few years before, when newly elected President Bill Clinton tried to end their exclusion from the military, the public reaction was so negative that he had to settle for the lousy, and now abandoned, “don’t ask, don’t tell” compromise. After the Hawaii Supreme Court made it seem likely that that state was about to adopt same-sex marriage, DOMA was enacted – not to address any existing problem, but to put political pressure on Clinton.

Republicans knew that the law would put Clinton in a difficult spot: either veto the law, and be branded as favoring same-sex marriage (which only a third of Americans then supported), or sign it and alienate his gay supporters, in either case hurting his chances of reelection. He chose the second option, and got reelected anyway. And so we were stuck with this ridiculous law. Congress wasn't thinking about solving a policy problem at all, and it certainly wasn’t thinking about the actual human beings whom this law was going to injure. It lashed out at gay people in this crazy way for the sake of pure political posturing.

So Kennedy could just have disposed of the case by invoking the rule that a bare desire to harm isn’t sufficient basis for a law. But he’s got another hobbyhorse: federalism. For decades, Kennedy has been in love with the idea of states’ rights, and he has repeatedly voted on that basis to hobble important federal laws, most recently the Voting Rights Act, on that basis.

One argument against DOMA was that it somehow invaded states’ rights, because marriage was traditionally a state matter. But could it really be true that, whenever a federal law uses the word "marriage" to define the scope of some federal program, it is obligated to follow state law? There’s an obvious counterexample: immigration. In most states, the government doesn't involve itself in the reasons a couple marries, even if there's no love involved and the marriage is primarily a business transaction or a matter of convenience. But when people marry for immigration purposes, the federal government has no trouble deeming the marriage "fraudulent" – a marriage that remains valid under state law. The Immigration and Customs Enforcement agency doesn't interfere with traditional state functions because it leaves the state free to recognize, for its own purposes, any marriage it likes. But it won't grant legal residency to immigrants it believes married only to secure the benefit.

Yet Kennedy insists that it’s necessary to discuss “the extent of the state power and authority over marriage as a matter of history and tradition.” He writes that “the Federal Government, through our history, has deferred to state law policy decisions with respect to domestic relations.”  We get pages of details documenting these facts. No doubt they are true. But why are they relevant? Kennedy doesn’t give us a clue.

Scalia pounces. Kennedy’s opinion, Scalia observes, “starts with seven full pages about the traditional power of States to define domestic relations—initially fooling many readers, I am sure, into thinking that this is a federalism opinion.” Then Kennedy says that it’s unnecessary to talk about federalism, but keeps harping on the states’ rights issue even after that.

I will bet that the liberals who made up Kennedy’s majority could see what a mess his opinion is, but were afraid to point that out to him for fear of offending him and losing his vote. Scalia is right about the opinion’s “disappearing trail of its legalistic argle-bargle.” It is such a fog that lower courts will easily be able to distinguish it when the potent question of whether same-sex couples have a right to marry – the question the Court ducked in its decision in Perry v. Brown, the California marriage case – comes up. “Lord, an opinion with such scatter-shot rationales as this one (federalism noises among them) can be distinguished in many ways. And deserves to be. State and lower federal courts should take the Court at its word and distinguish away.”

Scalia is fun to read, isn’t he? But he’s less fun when he tries to justify the law itself. Here’s his best shot: "DOMA avoids difficult choice-of-law issues that will now arise absent a uniform federal definition of marriage." What happens, he asks, to the marriage of a couple who wed in New York and move to Alabama? He thinks DOMA is a sensible response to this problem. But there are federal laws and regulations that already deal with those questions, which will still arise with underage marriages, cousin marriages, common-law marriages, and the like. Scalia doesn't explain why same sex marriage is any different.

Each justice whacks the other very effectively. Each of them is right about the other’s cluelessness. It’s like watching the Two Stooges. But, once again, all this is comic relief. The real story, which it’s easy to lose track of amid all the bad legal arguments, is that of the thousands of gay couples who have been casually hurt by this malignant, silly law. If you’re a married same-sex couple, just reconciling your state tax return (which recognizes your marriage) with the federal one (which doesn’t) has been a nightmare. Getting health insurance for your family has been a big, scary burden.

Now all that is suddenly over. The Court got to the right place clumsily. But it got there. Law professors like me can grouse about the reasoning. But it’s more important that the law will now facilitate the daily lives of ordinary people. That’s what law is for, isn’t it?

Andrew M. Koppelman is John Paul Stevens Professor of Law and Professor of Political Science at Northwestern University. His latest book is The Tough Luck Constitution and the Assault on Health Care Reform.