It's a Wendy Davis nation, now 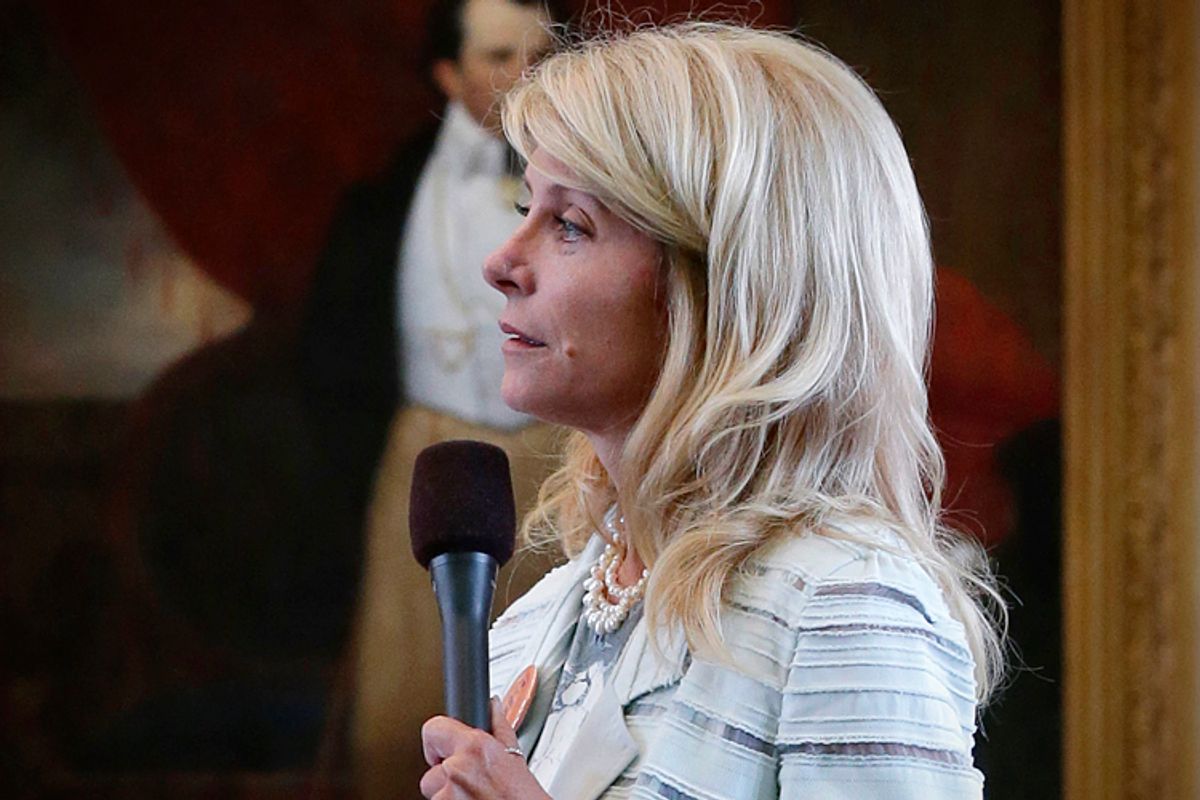 The shouting came, like water bursting from a broken levee, just before midnight. The hundreds, maybe thousands, of orange-shirted activists camped out in the Texas Capitol had done everything they could to stall a vote on an abortion-restricting bill -- from staging a citizen's filibuster late last week, to cheering on the 13-hour one by Sen. Wendy Davis that Tuesday night.

"At what point must a female senator raise her hand or voice to be recognized over the male colleagues in the room?" demanded an exasperated Sen. Leticia van de Putte, who had come from her father's funeral and was trying to prevent the filibuster from being dismantled on procedural grounds. Her words were what did it. Minutes to the deadline for the end of the special session, Senate Republicans seemed to be calling a vote, and shouting was all that was left.

For years, observers have said the enthusiasm and mobilization is on the antiabortion side, but not that night. It was still a game of defense, but pro-choice politicians and activists were pushing back harder than ever seen before.

Cecile Richards -- president of Planned Parenthood and daughter of legendary Texas Gov. Ann Richards -- was there, shouting too.  "My mother would have said, I hear America singing," Richards told Salon after leaving the Capitol. "It was literally an explosion of participatory democracy that I haven't seen the likes of in Texas in my memory."

The official Twitter account for Barack Obama agreed, tweeting a link to the livestream with, "Something special is happening in Austin tonight."

When the shouting began, pro-choice activist and writer Jessica Luther, who had been prodigiously tweeting, saw her followers outside Texas, who were watching the livestream, say to keep it going, that it was working. In the end, "The yelling was how it was defeated," said Luther. "They couldn’t get the votes done because they couldn't talk to each other."

The Texas fight is by no means over: On Wednesday evening, Perry announced he would call another special session, one too long to filibuster, and the probable vote count remains in his favor. But this time, no one will be surprised when opponents -- likely hundreds more -- put up a massive fight.

This is not how this was supposed to happen. Rick Perry, a faithful soldier of the antiabortion cause, had seen some resistance to his push to require transvaginal ultrasounds and viewings before abortion and to defund Planned Parenthood in his state, but nothing like this. And the provisions in question -- from a ban on abortions after 20 weeks to requiring admitting privileges at hospitals and other trumped-up regulations on abortion providers -- have passed easily in several other conservative states. In fact, the 20-week abortion ban, predicated on the principle of highly scientifically questionable and wholly constitutionally irrelevant "fetal pain," was designed to be a trap akin to the bruising "partial birth abortion" fights of the '90s and early 2000s. Democrats who opposed the ban, the thinking had gone, would be forced to defend less-popular, if rare, later abortions; others, fearing the political consequences of the past, would turn and run, chipping away at the abortion right. And then ideally it would go to the Supreme Court, like the "partial birth abortion" ban did twice, and hopefully undermine Roe v. Wade.

The U.S. House of Representatives passed such a ban earlier this month, but it has no hope of passage in the Senate or a signature from the president, which leaves the states. And Texas has long been at the frontier of the abortion rights battle, starting with its 1973 defense of its statute criminalizing abortion -- which led to Roe v. Wade. Like many other red states, the Republican landslide of 2010, purportedly about economic discontent, ramped up what had been a decades-long campaign to limit reproductive rights. But in Texas, it all tended to play out on a typically massive scale. It was Texas that was the first state to have in effect a law forcing women to look at ultrasounds before abortion, that tried to shut down Planned Parenthood in its state by dismantling women's health funding. The Susan G. Komen Foundation, which is headquartered in Dallas, was the first to learn that it had underestimated broad support for Planned Parenthood, presaging the presidential election.

But as much as that election's "war on women" rhetoric included a broad range of attacks on reproductive rights, the headlines were dominated by attacks on birth control and the rights of rape survivors, not abortion, on which polls show Americans have complicated and divided feelings. David Axelrod said as much in a March 31 appearance on "Meet the Press." Guest host Chuck Todd said, "The issue of reproductive rights was something you exploited in your campaign," and Axelrod agreed.

For years -- particularly the ones Democrats spent in the wilderness, losing national elections -- the party's pro-choice stance was blamed for losing so-called values voters. Axelrod pointed out how that had changed: "These were motivational issues for people on our side ... What's interesting to me is that these were once wedge issues for Republicans. Now some of them are working as wedge issues against Republicans. And it shows a shift of attitudes."

Gay rights, of course, have long since lost any traction as a wedge issue in Republicans' favor in all but the narrowest districts. It remains to be seen how the immigration reform debate will play out politically, but the 2012 election and its "self-deportation" rhetoric is widely seen to have driven away Latinos and Asians. And of course there was defunding Planned Parenthood and Todd Akin. But, Axelrod added, abortion wasn't part of that. Or, as he put it, "Abortion's a separate discussion."

If this week was any indication -- along with recent protests in Wisconsin and Ohio, and possibly more to come -- that may not prove true.

At the Texas Capitol Wednesday, Republicans seemed caught off guard. They didn't seem to have expected to need reinforcements: Eyewitnesses saw few antiabortion protesters, who wore blue shirts, among the orange throngs. And if they were aware of the nearly 200,000 people watching on the livestream, it didn't prevent them from trying to shut down the process, whether with spurious points of order or by changing the time stamps to make it seem the vote had taken place before midnight, which ultimately sank the bill for the time being. That livestream mattered not just for the outside world, but for the protesters who couldn't fit into the gallery and snaked around every stairway and crevice in the building.

"I know the GOP wants to take us back to the policies of the '60s, but they also seem to think we still have the technology they had in the '60s," said Andrea Grimes, who was covering the events for RH Reality Check.

At the same time, Democrats in the Senate were emboldened. "You could see the senators growing in stature as they came out to speak to the rotunda. They were so energized by having the kind of support that they did," said Richards. "There have been senators there who have not voted in support of abortion rights but who really saw that this was an attempt to shut down women’s healthcare and that it went far beyond abortion rights." She said there were protesters "ages 8 to 80," and that the 8-year-old had started a Twitter account she herself was following.

Afterward, in the rotunda, Richards announced to massive applause that she had gotten a text message saying the bill was dead. The Texas Tribune livestream had ended, and someone was livestreaming from his iPhone with impromptu commentary. A chant of "we're not waiting for 2014" went up.

They can't afford to: Davis nearly lost her seat to redistricting that the Department of Justice agreed was in violation of the Voting Rights Act -- the same one profoundly undermined by the Supreme Court this week. Democratic activists have set their sights on turning Texas blue in the long term, with an eye toward Latino citizens and mobilized young people. This week's showdown in the Capitol could be a harbinger -- but only if people can actually vote and be represented.

Referring to Lt. Gov. Dewhurst's calling the protesters an "unruly mob," Richards said, "It must have been a rude shock for him that people were paying attention ... He hasn’t seen participatory democracy in a really long time."

For now, as the fight goes forward, abortion rights are no longer consigned to the back of the Democratic coalition, turned into another way to make Republicans seem like the party of the past. Davis is a star, and thousands of Texans are not only furious, they've got the attention of the world.

"I feel like we saw the future," said Luther. "We saw what Texas can be."