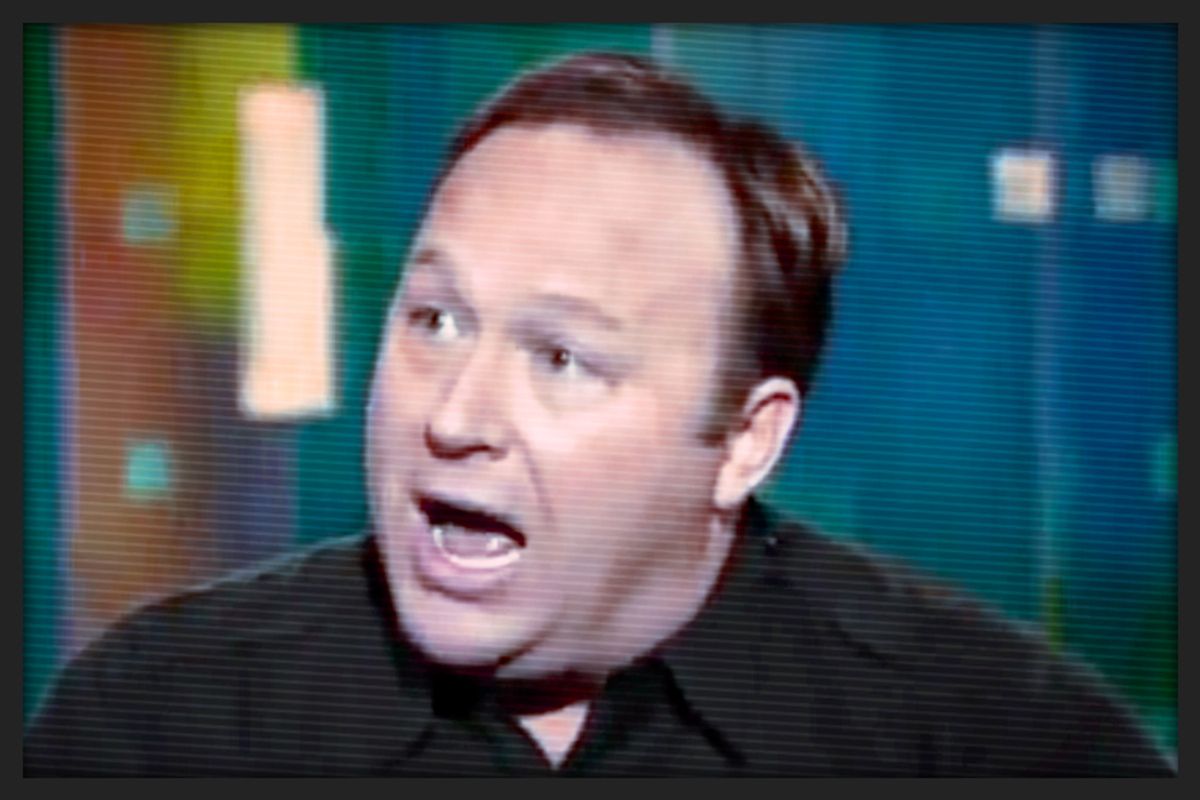 Long before the Supreme Court overturned the Defense of Marriage Act, conspiracy broadcaster Alex Jones was warning his viewers that the government was turning people gay by putting chemicals in their juice boxes, water bottles and potato chip bags that feminized men.

"The reason there are so many gay people now is because it's a chemical warfare operation," Jones said in a June 2010 clip that has gained renewed attention since the DOMA ruling. "I have the government documents where they said they're going to encourage homosexuality with chemicals so people don't have children."

Cutting open a juice box to reveal the nefarious plastic lining laced with "estrogen mimickers," Jones continued, "After you're done drinking your little juices, you're ready to go out and have a baby. You're ready to put makeup on, you're ready to wear a short skirt." While there is some research that suggests plastics leach hormone-like chemicals, there's no evidence that they're harmful to one's health or that the government is involved in a secret plot to turn the country gay.

It's typical Jones conspiracy fare: globalists secretly working to depopulate the planet so they can seize control. But it's also typical of a vicious homophobic vein in Jones' worldview, which is often overlooked and seems to run in direct contradiction to his proclaimed support for individual liberty. It's not a central theme of Jones' broadcasts, but a potent undercurrent.

For instance, while hosting Minnesota-based radical anti-gay pastor Bradlee Dean in 2011, Jones said that "all over the country, it is a fact" that gay people are "recruiting 7-year-olds." "They teach children sexual acts that can kill you," he added. Later, Jones defended Chick-fil-A's donations to anti-gay groups, and gave Dean a platform on InfoWars.com to attack the "homosexual agenda."

In October of 2011, Jones warned that "nellies," a derogatory term for gay people, are snatching children away from straight couples. "It's not that -- I don't even dislike gay people or hate them. It's that I've been to these events and a lot of times it's the specialized homosexuals who are collecting everybody's kids that run them, so then it's like they're persecuting us and I'm tired of it," he said.

Jones added that he's seen "female judges with butch haircuts who usually have a whole string of kids they've taken from people themselves." Responding to a caller from Wisconsin, Jones said, "You're up in Wisconsin, a very wicked nelly command base," and asked if the "nelly creature" in question was female or male. "I'm going to be honest about this because the kids come first. If the homosexual lobby attacks me, I don't care," he added, also saying that many gay people he's seen at pride events are pedophiles.

Then there was his row with Rachel Maddow, who mocked his theory that the government used a weather weapon to unleash tornados in the Midwest. Jones responded in the classiest way possible: "Mr. Maddow, I mean Janet Reno -- Janet Napolitano! I get them all confused. Pat from Saturday Night Live? No, no ... Ron Maddow?”

“I’m gonna be honest with everybody,” he said, pausing for dramatic effect, “I’m attracted to Mr. Maddow ... I always thought of myself as a heterosexual, but ... I wonder if Mr. Maddow is gonna join the Boy Scouts as a troop leader,” Jones said, cracking himself up.

The anti-gay sentiment is surprising, perhaps, coming from a libertarian defender of individualism, but vicious homophobia has a long history in the anti-communist John Birch Society, where Jones rips off most of his best work.