Why do we love fugitives so much?

From Snowden and Whitey Bulger, to Jesse James and Dorner, here's why we treat outlaws on the run as heroes 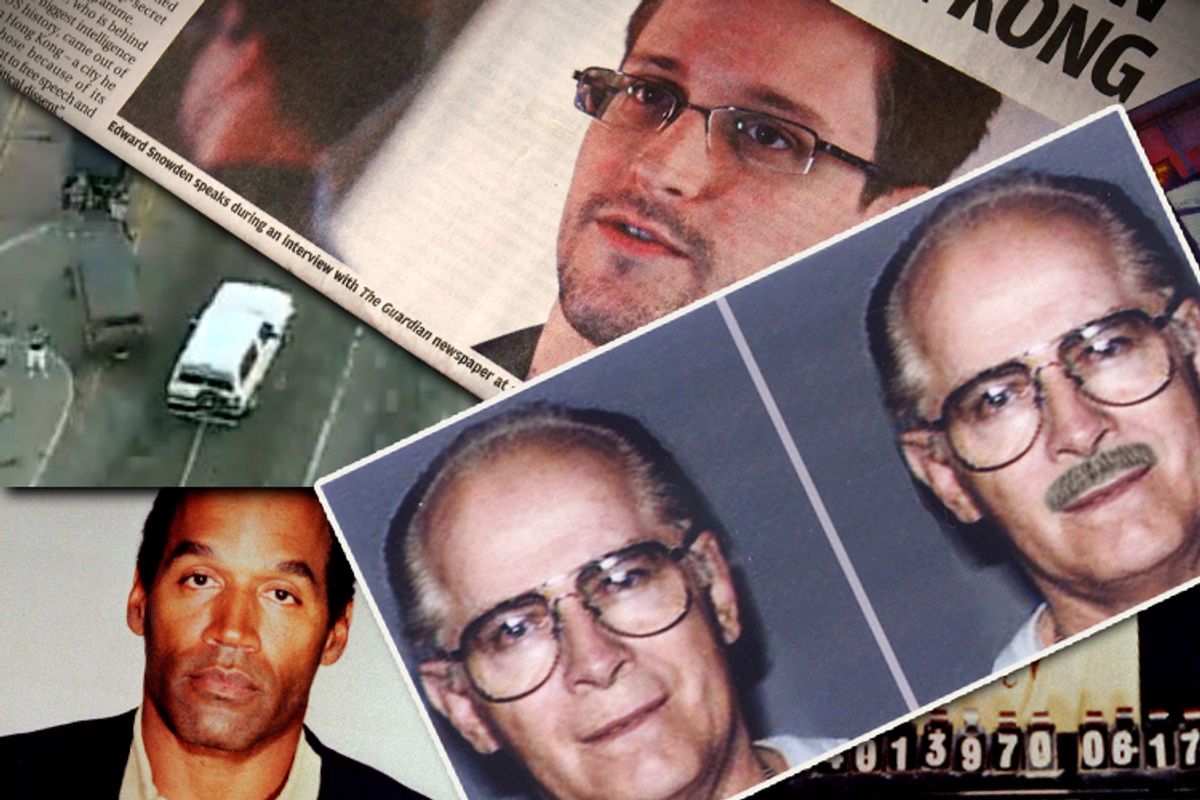 No matter what you think of Edward Snowden, it's undeniable that the former CIA computer whiz has a committed fan base across the globe, as he continues to evade authorities in a high-tech, high-stakes global manhunt. Offering all the political intrigue and personal drama of the "Bourne Identity" series with the benefit of being real, he’s already become a folk hero -- not just to online activists who worry about an increasingly omniscient surveillance state, but to many ordinary Americans.

In this way, Snowden is a quintessential American outlaw hero, albeit updated for the modern era. With many Americans cheering him on as he evades the law -- moving from Hong Kong to Moscow and possibly some other nation, seemingly outwitting the U.S. government all the while --  it echoes the reception many other fugitives like Whitey Bulger, O.J. Simpson (during the famous Bronco chase), and Bucky Phillips all received.

All of which raises a key question: Why do Americans so often root for outlaws on the run?

To be sure, outlaw mythology is by no means unique to American culture. Everyone in Australia knows the legend of Ned Kelly, a 19th-century gunman who has been portrayed in film by both Heath Ledger and Mick Jagger. In Mexico, there’s a whole musical subgenre of narcocorridos, ballads that glorify the country’s drug smugglers and kingpins, though they’ve fallen in popularity as the drug war has gotten bloodier. The Scots have Rob Roy and, of course, the English have Robin Hood, the archetypal romantic outlaw.

But scholars say there’s something unique about the American outlaw archetype, from Jesse James to John Dillinger and Bonnie and Clyde -- and it's striking how well Snowden fits the mold. “The Snowden case fits right in with the American penchant for bandit stories and the recurrent tendency for Americans to celebrate outlaw figures as heroes of a sort,” Casey Schmitt, a lecturer at the University of Wisconsin who studies the folklore of the American West, told Salon.

What makes American outlaws different from their European counterparts, which often tap into class dynamics, is that the American legends are often about individuals standing apart and out of the reach from the all-powerful system. “It’s the notion of a common man, a law-abiding citizen, who is driven to a life of crime because of an oppressive official system that is impinging on individual liberty,” Keagan LeJeune, an English professor and folklorist at McNeese State University in Louisiana, told Salon.

It’s hard to think of a more apt characterization of Snowden, if you’re inclined to be fan of his. He gave up a seemingly idyllic, normal life in order to expose a system that he felt impinged on American individualism. In this sense, the fact that he has a relatively modest educational background only furthers the myth and thrill of someone now defying history’s most powerful military.

We’re attracted to their stories, Schmitt said, because “the idea that a single individual of humble means can, through actions that break the status quo and challenge established forms, change the course of economy, of society, of history” is hugely empowering. “It allows us to co-identify as not just a mass of peoples, but as a nation of individuals sharing value for the individual's worth,” he added.

For this reason, many outlaws come from the frontier, where rugged individualism is necessary for survival and the established system’s grip on society is tenuous. Here, from the bootleggers in Appalachia, to swamp dwellers in Louisiana, to Western cattle towns, people lived by their own code, beyond the reach of the law and modern society. It’s when Prohibition came in, or the railroads, or logging conglomerates arrived to the swamps, or federal troops arrived and set up their own foreign code of law that outlaws arose.

In Snowden’s case, it’s a digital frontier where an underground hacker culture developed long before most Americans even got on AOL. Now, Internet aficionados fear the encroachment of  big corporations, intellectual property regimes and government snooping.

“People have written quite often about hackers as sort of contemporary outlaws, because they do operate in a frontier that is fluid and with their own code,” LeJeune said. “You have these cultural heroes who are breaking laws, but people are defending them because they are doing what they feel is right. And Snowden plays directly into this. Even if he broke the law, he’s abiding by a higher law.” At least to him and his legions of fans and even hero worshippers online, who can be found on Reddit and social media, and among libertarian-left-leaning, intellectually savvy elites.

He even fits the biographic archetype of the Robin Hood type identified by Australian folklorist Graham Seal in his 2011 book "Outlaw Heroes in Myth and History." Like other hero outlaws, Snowden is a young man with no wife or kids to tie him down, who comes from a place of little social or economic power but, under extreme circumstances, does what he must to right perceived wrongs and evade authorities with incredible skill and/or ingenuity. Along the way, he takes from the rich and gives to the poor.

“In our current American era, information has become a commodity,” Schdmitt points out, and Snowden democratized information by literally stealing it from a tiny elite and disseminating it to the masses. “Snowden is certainly being cast as this character in some retellings of his tale. Not everyone feels this way about him, but for those who make the association and connect a fugitive's actions with their own perceived plight, anyone can become a Robin Hood.”

And the longer he evades justice, the better for his mythos. “Part of the characteristics of the outlaw is not only that he should be driven to a life of crime, but he needs to be able to escape justice, at least for a time. He needs to be able to confound the system, despite all its power, and the fact that he can do so shows the individual’s power in the face of the system,” LeJeune said.

For instance, Schmitt last year wrote a paper about an almost tailor-made modern outlaw hero, Colton Harris-Moore, the 22-year-old "Barefoot Bandit” who evaded police for almost two years as he led them on a wild goose chase across the country and eventually to the Bahamas. Along the way, he stole two small airplanes, a speedboat and several cars, and he committed more than 100 home burglaries (many of which he reportedly performed barefoot). Before he was arrested in 2010, Harris-Moore made small acts of generosity and became a national celebrity.  20th Century Fox purchased the film rights even before Harris-Moore had been arrested.

And Harris-Moore and Snowen are tame compared to the outlaw folk heroes of old. They need not actually be honorable men -- often they were brutal killers -- Schmitt said, but what matters for the lore is that they were a “lone rebel against a supremely powerful authority” and still managed to evade its grasp, often as if by magic.

This helps explain why otherwise despicable figures like Whitey Bulger, Dzhokhar Tsarnaev, and LAPD officer-turned cop-killer Chris Dorner found followings online. There’s a reason films like “The Fugitive” and “Bourne Identity” are so successful -- they’re modern takes on the centuries-old outlaw tale. The first “Rambo” offers a particularly good example. Sylvester Stallone's eponymous character is no saint, killing three dogs and wounding police officers, but he’s the hero, alone against the arrogant and abusive sheriff and all his men, helicopters and guns.

Some of it too may simply be the thrill of the chase. The Dorner manhunt led to record-breaking ratings surges for local Los Angeles TV stations, and even national cable news networks raked in millions of views as the country was gripped by the search. And there’s nothing like a car chase to get people glued to a TV.

Glenn Greenwald calls the manhunt a global “White Bronco moment,” and -- while Snowden's alleged crimes are different from murder -- the comparison is apt. The public was split on O.J. Simpson’s guilt, just as it is about Snowden’s, but what mattered was the chase. In 1994, over 20 helicopters followed the low-speed chase, garnering over 95 million viewers nationwide. Spectators even stood on freeway overpasses to wait for the procession to pass under and cheer O.J. on.

The helicopter’s view of the lone vehicle pursued by a swarm of police cars is a perfect distillation of the appeal of the outlaw. What the man or woman (but usually man) driving the car did or who they are is largely irrelevant, what matters is that there they are with all the odds stacked against them, and part of us roots for them, if only to extend the thrill of the chase a bit longer and to watch the underdog succeed.

Uzma Kolsky condemned the violent spectacles in the Atlantic after the Boston manhunt a few months ago. “Our persisting fascination with the pursuit and capture of alleged criminals is increasingly unsettling as it has evolved from chase to hunt,” she wrote. “Absorbed by the gory mayhem that ensued in Boston, we have glorified violence and death when it is inflicted on a suspected terrorist.”

Maybe, but our fascination has little to do with 24-hour cable news or the Internet, and is really nothing new at all. It's about that intangible quality that makes us hard-wired to instinctively admire the fugitive.