Curtis Sittenfeld: "It's not my primary goal to make my characters likable" 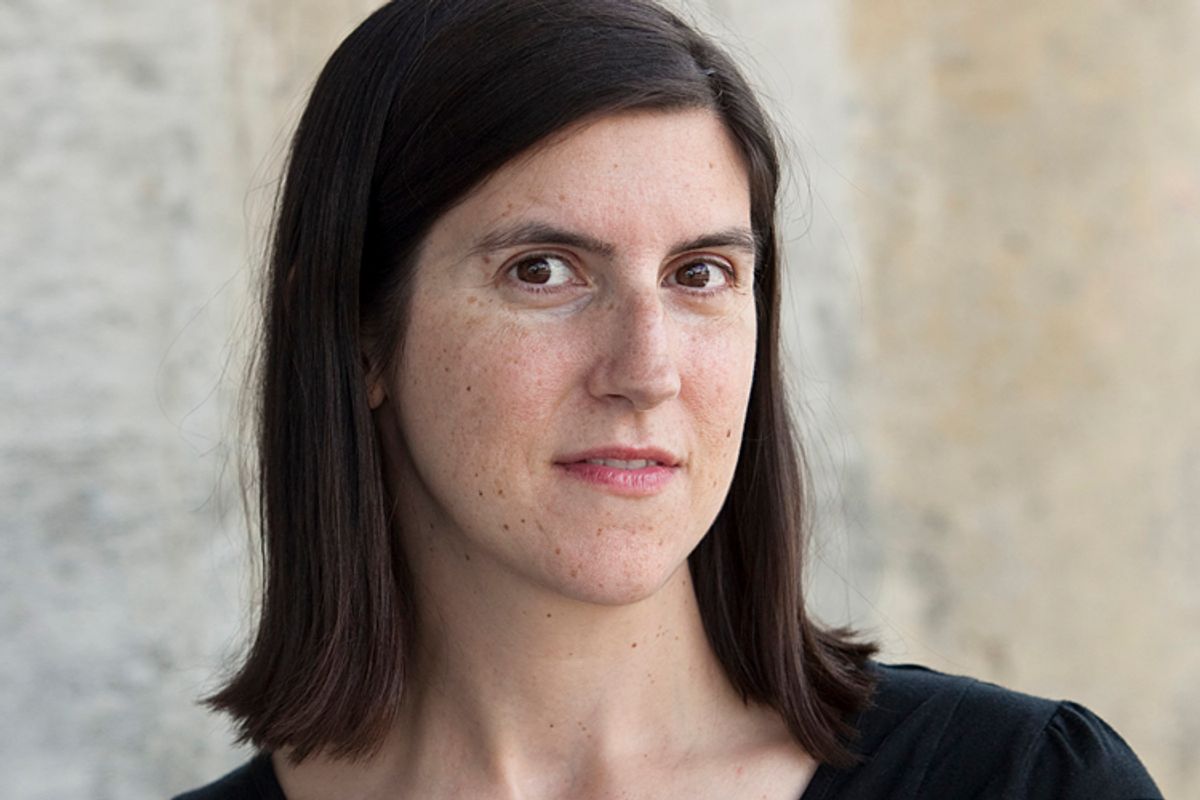 Read an excerpt from "Sisterland" here.

The novelist Curtis Sittenfeld's career has felt so far like one departure after the next.

Her first novel, "Prep," broke out in a huge way upon its 2005 release, ending up on the New York Times' Ten Best Books of the Year list; the very next year, Sittenfeld moved from high school to adult life with "The Man of My Dreams," tracking a far more depressed protagonist's lifelong quest for love. And at the very end of the Bush presidency, Sittenfeld dropped "American Wife," a novel lightly fictionalizing the life of Laura Bush as dutiful spouse to a wayward but upwardly mobile scion. The only common threads these books share are a certain sensitivity to the way in which relationships -- with friends, relatives, lovers -- change over time, and well-drawn female protagonists who are unafraid to confess their less admirable actions and impulses.

Sittenfeld has done it again, marrying her sensibility to an entirely new subject matter in "Sisterland" (out now). The sisters of the title are the twins Violet and Kate -- née Daisy -- who are born with psychic abilities. As they grow older, Violet leans into her sixth sense, building a somewhat rudimentary career out of performing readings and séances. Daisy, on the other hand, changes her name and her life, becoming the attentive mother her family never had and finding a way to abandon her extrasensory abilities.

Both characters act at times reprehensibly -- Violet is a narcissist of the first order, dependent on her family for money, car rides and perpetual validation, and Kate's highly constructed life hides the occasional cruel impulse. And yet their relationship is drawn with a keen attention to detail, making "Sisterland" a novel that straddles the line in this year's debate over the assumptions readers bring to bear upon books, that "literary novels" ought to feature "unlikable characters" and what is commonly called "genre fiction" must feature the opposite. Salon spoke to Sittenfeld about her book, how covers and titles get hashed out with her publisher, and the expectations her readers have.

"Sisterland" feels so sui generis in a way -- touching upon both the supernatural and the fairly realistic. What sort of things do you like to read -- and what informed your latest book?

I would say I have very wide-ranging taste -- I have an ongoing weakness for a really intelligently written contemporary novel about a neurotic woman. I keep coming back to that. But I'll read anything if it's smart and doesn't have too much creepiness or violence. I'm kind of on a nonfiction jag. I'm not sure if I'd point to any other fiction and say it influenced the book. I'm reading two books of nonfiction simultaneously right now. One I'm totally obsessed with is called "Drama High." It's by Michael Sokolove --  he grew up in Levittown, Penn., goes back to the high school he went to where a drama and English teacher he loved is still teaching. It's so well done. And if someone had asked me, Would you like to read nonfiction about someone going back to their high school?, I might have been doubtful.

It's kind of similar to how a lot of people probably react to your book, which uses psychic abilities as a trope but isn't a thriller or mystery at all. I didn't expect the book to be straightforwardly about life in the Missouri suburbs.

I feel like it'd be really hard for me to write a thriller or truly paranormal book. Some of the reviews say "Curtis dips her toe into the paranormal," and I'm like, Really? The book sounds kind of kooky; it doesn't read as kooky at all. There are maybe two kooky paragraphs over 400 pages. The funny thing is, I don't think I realized quite how weird this book would sound to some people. I see these twin sisters' psychic abilities as one element of their personalities, but they're leading realistic lives.

So I take it that you read your reviews.

No! What are you talking about? [laughs] I feel like my rule to myself is, of course I'll read any positive review, I'll read an intelligent negative review, but I won't read a dumb negative review. If someone has thoughtful criticisms I might learn from, I will read. I wouldn't say I pore over them.

It's interesting, talking about how your work is perceived, because I feel as though you've been marketed a certain way from the beginning, a way that may not jibe with the content of your books. "Sisterland" has a pretty cover, with a stock image of two young girls, that belies how adult the situations get. "Prep," with the grosgrain belt on the cover, was originally titled "Cipher," which may give a more accurate impression of what it's about.

I was totally onboard with changing the title. I gave a reading the other night and someone asked about covers. I sincerely feel if I were left to my own devices, I'd probably pick the wrong cover. I have strong opinions about the writing and structure but I'm fairly open-minded about title and cover. My publisher is trying to make my books seem as appealing as possible to as wide an audience as possible and that's exactly what a publisher should do. Do my books look commercial in a way that's off-putting to some readers who might be pleasantly surprised if they read them? Probably, but you can't please everyone.

Talk a little about the debate over "likable characters" that's been going on this season. I didn't necessarily find every action the sisters undertook to be admirable.

Um, well, I have mixed feelings. It's not my primary goal to make my characters likable. I think the one thing that can happen that's gendered is sometimes readers are likelier to assume if a female character created by a woman is, quote-unquote, unlikable, it's a mistake on the writer's part rather than a conscious decision to make that character complex. That's sort of one theory I have.

Another thing I'm aware of -- I think there's only so much unlikability a reader will put up with. If I find a character loathsome, ultimately I might find a book loathsome too. But "likable" and "unlikable" are very subjective words. The thing that I find makes a character endearing might put another reader off. There are readers who want fictional characters to be moral role models. I am not one of those readers.

I was interested in what you were saying about returning to your hometown earlier, because you recently wrote for the New York Times about moving back to the Midwest -- to St. Louis, after growing up in Ohio -- and your novel's set in St. Louis, too. Do you feel like being away from New York and from the academy helps or hurts you as a novelist?

Both. You know, I occasionally go to New York and it feels very exciting. I went to the People magazine party at BEA [Book Expo America] and it was incredibly titillating to me because I never go to parties like that. Ooh, Jonathan Lethem! Elizabeth Gilbert! The actress from "The Help," Octavia Butler! I mean, Spencer! I'm almost proud of myself for making that mistake. I know an embarrassing amount about celebrities.

I'm sure I would not have written this book if I didn't live in St. Louis. And I think that there's a very gossipy aspect to my personality, which is not nourished in St. Louis. And it's very healthy that it's not. I have very close writer friends in other cities. I rarely socialize with other writers. I have a very average life.

Do your friends in St. Louis find it interesting that you're a novelist, or is it just another job, like lawyer or bank teller?

I think they think it's slightly interesting.

After four finely wrought novels with female protagonists, does the thought of writing a novel from a man's point of view hold any appeal?

There's a particular idea I have that's a semi-historical novel. It'd be a novel about something that happened in the 1950s and '60s. And I'd use a male protagonist. But my default is female.

When it comes to reader response -- the reaction beyond critics -- are you worried that someone who picks up your book because of its marketing or the elevator pitch, which is pretty sensational, won't like the subtle story you tell?

Well, I mean, I wouldn't want a reader to feel like they'd been duped into buying my book. Of course I'd rather have the opposite -- a person is skeptical and is pleasantly surprised by it. There's so much I can't control about what happens after I write the book. Reader reactions are one of those things. On the whole, I feel like, I think the most common reaction I've gotten is this: The premise seems really weird, but then in spite of myself I really enjoyed it! I'm willing to take that slightly backhanded compliment. But you can't please everyone. That's like my motto. It's true. And I think that -- I can understand why there are readers who think this book seems really weird; on the flip side, at my most recent reading there was a woman who was a psychic and she said she found it really convincing.