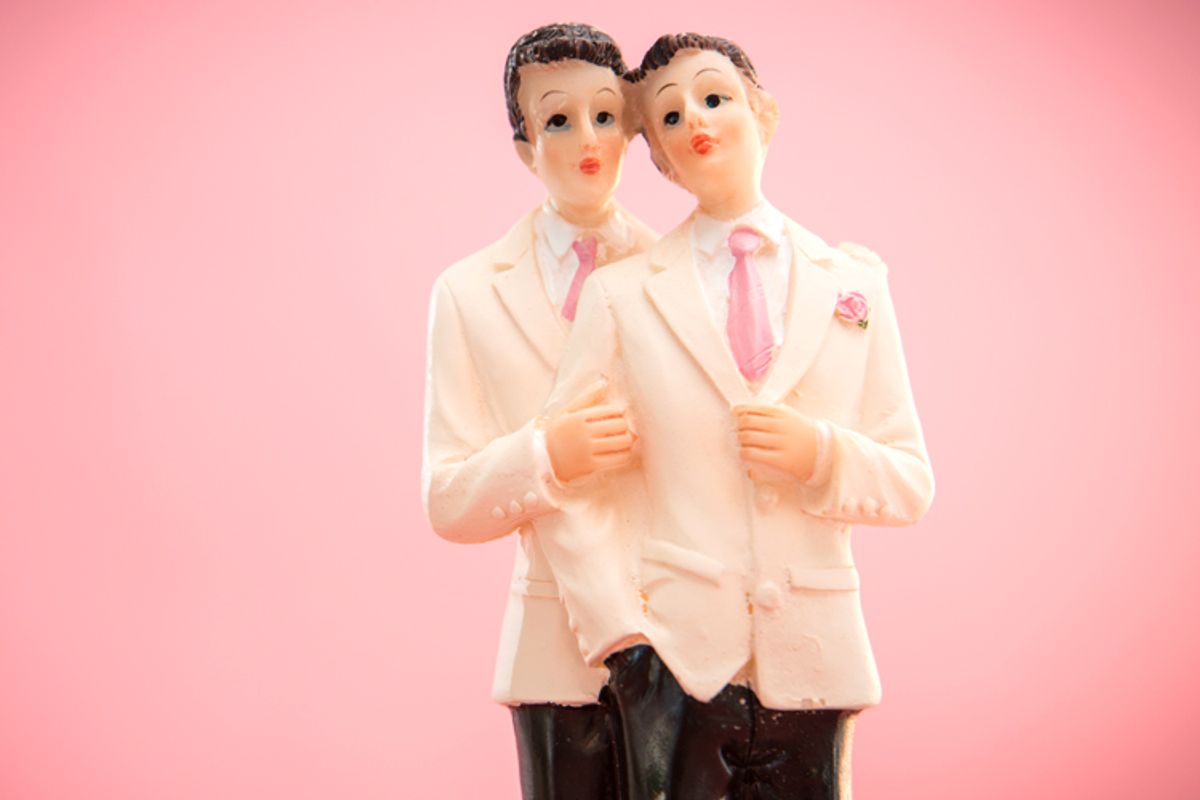 The very same day that the Supreme Court handed down rulings in favor of marriage equality, popular wedding site The Knot premiered its digital magazine for LGBT brides- and grooms-to-be. It was a powerful reminder: There's a lot of money to be made on gay marriage. Same-sex weddings will bring California businesses $492 million in the next three years, according to one recent estimate. In 2004, Forbes predicted that if legalized in all states, same-sex weddings could generate $16.8 billion from LGBT couples who decided to get hitched. It’s already an estimated $55 to $70 billion industry. Major brands have begun to take note.

This year, Nordstrom launched a commercial for its "wedding suite" starring both straight and gay couples. Last year saw a spate of LGBT-friendly ads. Target began selling same-sex wedding cards and promoting a gender-neutral registry with a print ad featuring two men holding hands. (The company's record on LGBT rights is hardly pristine, though: Target courted controversy in 2010 by donating $150,000 to a conservative, anti-gay marriage gubernatorial candidate.) Macy's ran a subtle print ad featuring a multi-layer cake with a barely noticeable groom-and-groom cake-topper. (The subtlety didn't stop the American Family Association from freaking the hell out -- which makes total sense, the American Family Association protesting the promotion of ... families.) Tiffany & Co., which more than a decade ago made its registry gender-neutral, launched the website What Makes Love True, which features stories about real people; its homepage currently features one gay couple, out of two-dozen couples (to that, I offer a one-handed clap.) J.Crew featured its first photo shoot of a gay wedding.

Hotels, including the Marriott and W chains, have made the greatest effort to court same-sex couples, with everything from special wedding and honeymoon packages to “marriage equality” discounts. “They see the dollars and cents,” says Bernadette Coveney Smith, founder of 14 Stories, the first same-sex wedding planning company in the U.S. “Hotels control the food and beverage, and food and beverage is the biggest wedding line item. So it's just business.”

Bridal magazines have slowly incorporated same-sex couples as well. In 2010, Martha Stewart Weddings featured its first same-sex ceremony (one of the grooms is Martha’s nephew). Condé Nast's Brides ran a piece on same-sex weddings back in 2003 and has gradually begun to include gay weddings in its coverage of real -- as opposed to staged -- weddings. Executive Editor Lauren Iannotti wrote me in an email, “We're so happy to see that the Court is in line with the rest of the country and has struck down these discriminatory measures.” She says that “if this ruling changes anything for us,” she hopes it’s that they will get more submissions from LGBT couples.

Same-sex weddings have been much more quickly and thoroughly embraced online -- by wedding blogs, wedding planners and photographers selling their services on branded personal websites and, of course, Etsy sellers. (Want a gift bag with not one but two hipster mustaches? Of course. Jonesing for some gay-friendly chevrons? They've got you covered. A same-sex gnome cake-topper for $100? No problem.)

The mainstream wedding industry still has plenty of holdouts, though. Take the lace-and-tulle behemoth David’s Bridal. The "Dress Your Wedding" feature on the company's website, which allows you to outfit virtual paper dolls representing all of the members of your wedding party, offers only a bride and groom option. I came across a post on a wedding site by a woman who had inquired about the company's position on same-sex marriage after stumbling across the hetero-centric language on their site. She claims to have received an email in response telling her that the issue would be added to the marketing team's to-do list.

That was two years ago. Must be a long to-do list!

When I contacted David's Bridal to ask about its stance on same-sex marriage, a spokesperson responded in an email, "We are in the business of helping all [sic] bride's find the perfect gown." I suppose it's no great surprise that a wedding gown company would be willing to help couples interested in buying twice as many weddings gowns. The question is whether the company is interested in publicly courting that demographic. I followed up to ask whether David’s Bridal had any plans to directly target same-sex couples or adopt gender-neutral language on the company website, but didn’t receive a response.

The chain's 300-plus stores span 45 states; we're not talking about a San Francisco wedding boutique here. From a strictly financial sense, you have to wonder if there is a cautious calculation at play: Is the benefit of taking a slice of that $16.8 billion greater than the potential penalty of losing bigoted customers?

Coveney Smith says it may take longer for national wedding brands like David’s Bridal to adopt gay-friendly marketing, but that they inevitably will have to. “They're just gonna look archaic and outdated to their straight clients if they don't,” she said. “Seventy percent of millennials support same-sex marriage -- so what if their parents don't! The millennials do and they're the ones getting married, and more and more of them are actually paying for the weddings themselves, so they're not necessarily caring what their parents think about the vendors they hire.”

At the moment, the brands that are beginning to target LGBT couples are doing so with caution, simply throwing in a same-sex couple here and there. This might seem a wee bit cowardly, but the ultimate effect is good, says Coveney Smith. It "normalizes" things, she says, and delivers the message, "We're just like everybody else."