Machiavelli doesn't belong to the 1 percent

"The Prince" is oft-quoted on Wall Street, but its author was a hero of the working class who despised elites 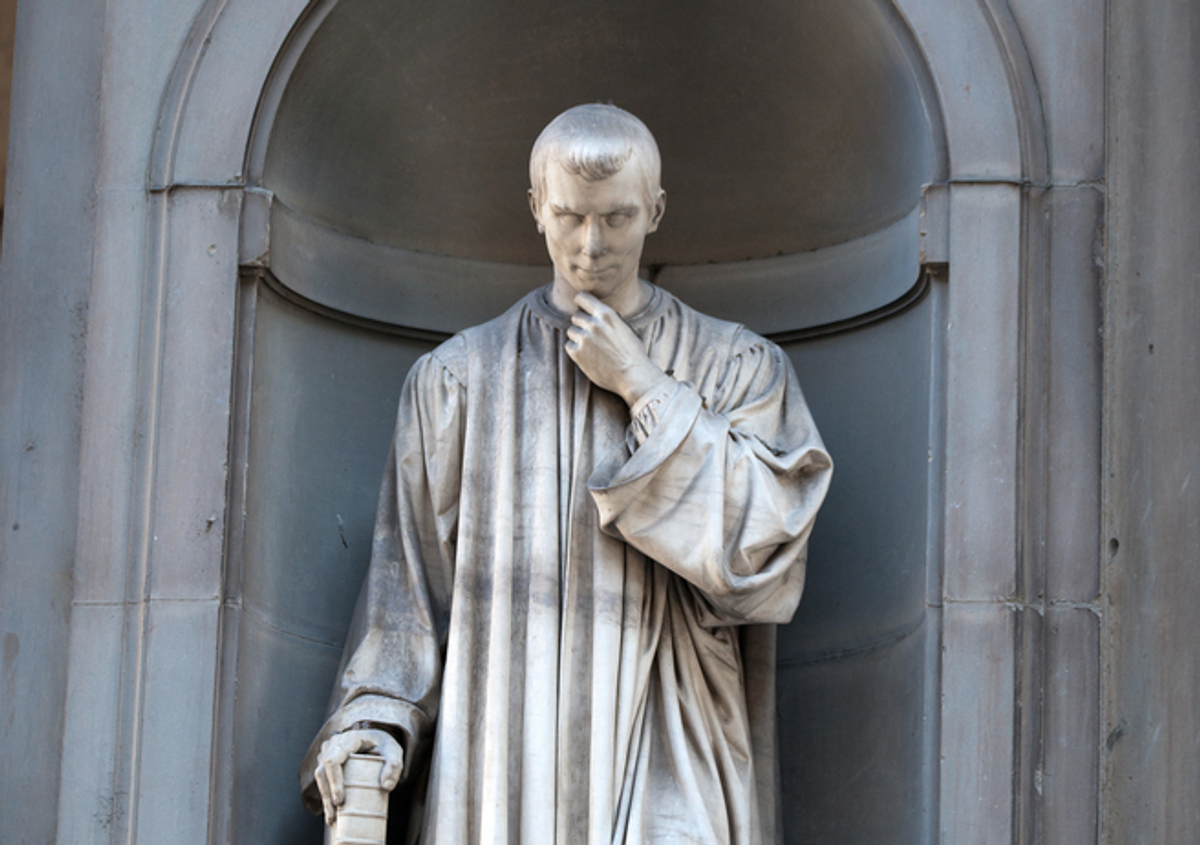 I keep a portrait of Machiavelli over my desk at work — an interior design choice that, I have learned, dismays some of my coworkers. Amid a recent mid-afternoon zone out, I received an email from one of them with the title “Who Wants to Serve a Billionaire?” The message contained a link to an article in the Guardian about a growing group of international multi-billionaires, their so-called “superyachts,” and the desperate lower-class Britons and Eastern Europeans who serve them as deckhands.

The report is an indelible document of our time, something like the “Newsreel” scenes from John Dos Passos’ USA trilogy. It’s a testament to the rapidly diverging fortunes of the 1% and the rest of us the world over. “These are people who are used to getting what they want,” the reporter reminds us, “and, as employers, they tend to be extremely exacting.” A training session for these maritime helots (“who need to be equipped with discretion, servility and good ironing skills”) serves to frame the piece. The trainer, a no-nonsense retired deckhand named Terry Gilmore, doesn’t hesitate to warn his pupils that their life on the high seas will be anything but glamorous. “Staff need to understand they will simply be ‘glorified cleaners’, he tells them.” His training program is preparation for a life of moderately compensated debasement:

Trainees must memorise correct forms of address from a training manual, which informs them that it is unacceptable to ask “Why?” (it should be substituted with “May I know the reason?”). The inquiry “Are you done?” should be replaced with “May I ask if you have finished?”

Trainees are told that some guests may request that they stand silently on board deck, motionless in the sunshine, waiting for instructions. “It’s stupid, because they could use a buzzer,” Gilmore says, but much of the staffing on yacht businesses is about ostentation and if a motionless steward, standing by on deck is what the owner requests, then staff are not to argue.

He tells trainees they must never wear sunglasses while addressing guests on board a yacht, because guests want to see be able to see their eyes.

Other duties include polishing remote controls, keeping bottles of sunscreen at least half full, properly displaying the insignia on monogrammed towels, and, of course, silently putting up with the occasional pinch on the bottom or torrent of verbal abuse. Because of the non-territorial nature of the enterprise, yacht owners have little to no compulsion to abide by any kind of employment law or workplace regulation, and the farrago of nationalities among yacht owners, ship registries, and crew members makes it extremely difficult to ensure the proper social security payments. Of course, staff can be hired and fired at will, often for the most superficial and offensive reasons. “This is probably the most politically incorrect industry in the world,” says a spokesperson for an organization that supports yacht staff. “You can get fired because you are not blonde or pretty. It is all about the look and the image.” It’s a billionaire’s utopia, capitalism in its most distilled and nightmarish form.

As I finished reading the piece I leaned back in my chair and let a cleansing wave of class rage wash over me, secure in the knowledge that my hate remains pure. I contemplated the portrait of the Florentine over my desk and asked myself a question that seems to be arising with ever greater frequency for me these days: What would Machiavelli do?

Like Karl Marx and Adam Smith, Machiavelli is one of those canonical thinkers who are much more widely quoted than read. Far from being the evil courtier of popular imagination, in The Discourses in particular Machiavelli emerges a theorist of class struggle and an advocate of democratic control of the elites by the people in a republican polity. As the political theorist John McCormick describes him:

Machiavelli excoriates previous writers for denigrating popular judgment and participation, and for extolling the supposedly superior governing capacities of princes and patricians. Departing from the opinion of these writers, Machiavelli argues that well-ordered republics structure themselves such that common people contain, contest and control the behavior of political and economic elites, and they place ultimate judgment over legislation and political punishment in the hands of the many and not the few. More specifically, like Rome, they establish magistracies for which wealthy and prominent citizens are ineligible, like the tribunes of the plebs, and they empower the people to veto public policies and indict individuals that threaten the common good — a common good unabashedly determined from the perspective of the people and not the elite.

The main lessons from The Discourses are that “the few always act in favor of the few,” and that the ambitions of the rich are so destructive that they must be vigorously suppressed in order to maintain the egalitarian foundations of republican liberty. His is a political vision with no place for superyachts, carried interest, tax breaks for luxury condo developments, or the legalized bribery of private campaign financing.

If you want to get an idea of just how much Machiavelli despised the 1% of his day look to Chapter 55 of The Discourses, in which he dispenses some of his most ruthless advice on how to maintain a well-ordered polity. As was his wont, Machiavelli points to the Germanic city-states as paragons of republican liberty. How did they maintain that enviable status? For starters, their hatred of the rich was pure. When a wealthy guy started flaunting it, they just killed him.

That Republic, whose political existence is maintained uncorrupted, does not permit that any of its Citizens to be or live in the manner of a Gentleman, instead maintain among themselves a perfect equality, and are the greatest enemies of those Lords and Gentlemen who are in that province: and if, by chance, any should come into their hands, they kill them as being Princes of corruption and the cause of every trouble.

The article that provoked this spasm of class rage ends with a telling quote from the founder of a high-end domestic staff recruiting agency: “When I first came over from Sweden, I worried that people had so much money. I don’t think about it any more. What matters to me is whether or not people are nice.” That’s all very sweet, but when our time comes it’s off to the tribunes of the plebs with the lot of you.

Class Jacobin Machiavelli The Discourses The One Percent Theory