Racism was so ingrained in my Southern family, they never even realized they were racist. Now we no longer speak 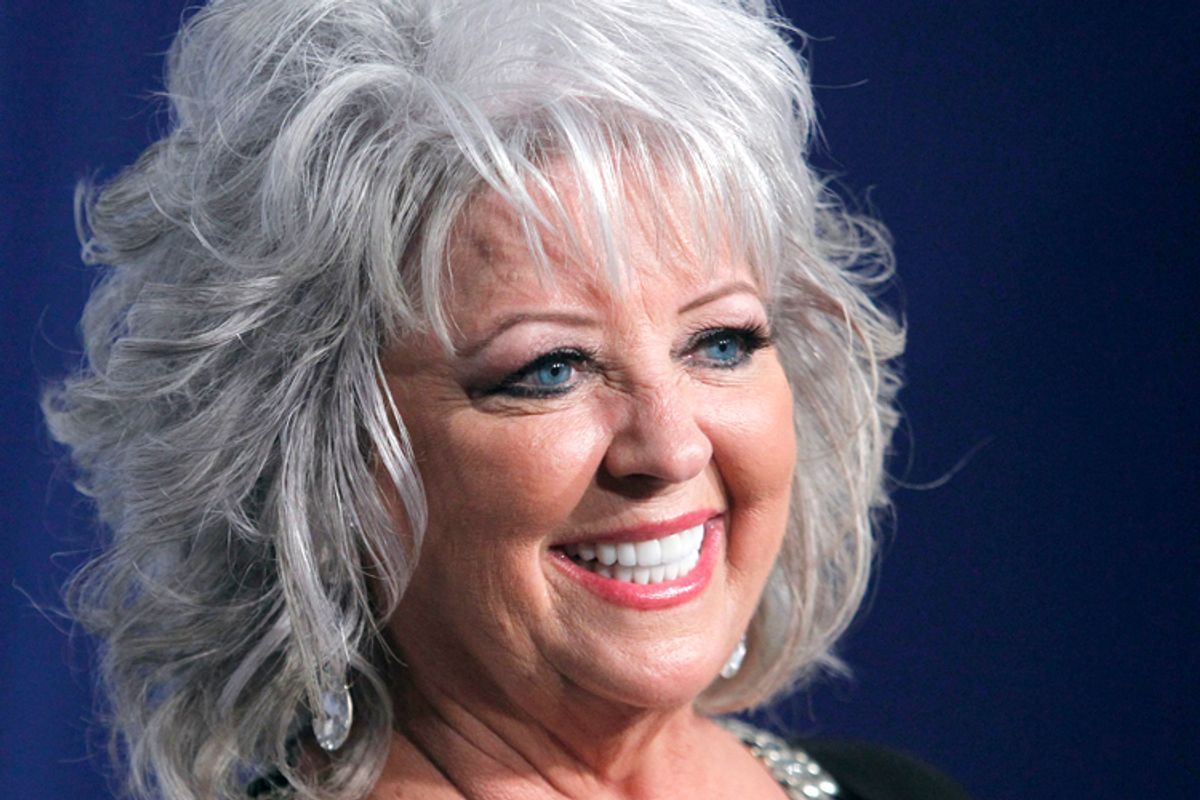 Paula Deen is a racist, and like a lot of racists in the South, she honestly doesn’t believe she is a racist. In a Today show interview this morning with Matt Lauer, Paula Deen insists that she believes “all of God’s creatures should be treated equally” and that she “wasn’t raised” a racist. I believe she believes that, though it is obvious that she’s lying when she says that the only time she’s ever used the N-word was when a black man held her up at gunpoint.

“It’s just not a part of who we are,” Paula Deen asserts, which is also a clear lie, and rather than apologize for who she is and make an effort to change, Deen insists that she has never “in her 66 years” used that word but once, and that she’s offended by others’ use of it. Anyone who grew up in the South knows this to be a lie, and while many of the people who know she is lying are winking right along with her tear-streaked face, the rest of us know.

Unless you were raised by well educated people, or carpetbaggers, or the rare Southern hippie, racism was something of a default mode in the South, so casual and ingrained that most of us didn’t even realize that what we were saying was racist. I don’t know what kids North of the Mason Dixon line called each other on the playground in the 80s and 90s, but in the small-town South, kids called each other “ni**er” and “fa**ot” as easy and as casually as kids might call each other “jerks” or “dum-dum heads.” You didn’t have cooties where I grew up, you had “ni**er” cooties,” and the only names we took any real offense to were variations of “ni**er lover,” the lowest of all insults, reserved for kids who insisted they were safe when clearly the ball reached first base before they did.

The notion that my kids could say those words — words my six year old has never even heard, and hopefully will not hear until he’s studying the the Civil War and the Civil Rights era in high school — seems appalling and repulsive to me, but that was not so in the schools I attended in the South. I don’t remember ever hearing a teacher ask a student not to use those words, and there’s no way they could’ve not heard them. But then, what were teachers going to do? Raise the issue with the parents, who taught the kids those words, who would dismiss it? We knew the “N-word” in the South; it was the “R-word” that we’d never heard before: Racism.

I lived in Little Rock for two years during the 1980s, during the desegregation of schools. I attended an elementary school close by (I was one of two white kids in my class), while my brother was bussed 45 minutes away to help even out the numbers in another district. My mother, as I recall, burst into the principal’s office and began raising hell with the principal, insisting that she didn’t want her 6 year old riding the bus with a “bunch of “n******s.” Likewise, my father — a gay man in the South, for God’s sake — was as racist as anyone, often joking that Lincoln was America’s worst president because he had freed the slaves.

These were the people that raised me, that raised people like Paula Deen. What hope did we have?

There’s a popular Chris Rock stand-up bit where Rock makes the distinction between black people and “ni**ers,” a revelatory and controversial bit at the time. I can assure you, however, that white people in the small-town South had been making that distinction for years, and in the rare instance in which a white person was called on their racism for saying the N-word, they’d often fall back on that argument: “I’m not a racist. A n****er is not necessarily a black person. It’s a lazy attitude that can apply to anyone.” I grew up on a street where at least 60 percent of the residents were drug addicts and/or on welfare, and yet I never heard anyone call any of the other white people on that street the N-word. It’s why I always hated that Chris Rock bit; it reinforced that argument. People in the South all over will now cite the bit as evidence that they’re not racist. “See? A black man agrees with us!”

It took me a lot of years to understand that the N-word was charged, that there was subtext and history to that word, and it’s no wonder. Where were we going to learn otherwise? Teachers, who ignored its usage? Parents, who had passed the word and the culture of racism onto their children? Our peers and classmates, who made no distinction between that word and “lazy asshole.” Black people in the community, who literally lived on the other side of the tracks?

I was lucky. I was saved by television. I spent more hours in front of my television than with my parents, or the kids on my street, and after a while, the messages from shows like “The Cosby Show,” or from those “The More You Know” campaigns on NBC, began to seep through (people probably don’t realize how effective those campaigns can be to a 9 or 10 year old whose biggest source of parental guidance comes from after-school specials). The messages began to take hold. I finally began to understand that the things that my parents felt, that the kids in my classes were saying, wasn’t OK. That they were more than wrong; they were vile.

By the time I’d reached high school, I actually began to voice my complaints, although doing so had one of two effects. 1) I was either alienated by others, or 2) my friends would intentionally use the N-word because they knew it’d made me cringe. I remember how much they loved getting a rise out of me. The father of my high-school sweetheart used to utter the word frequently around me, and when I’d turn beet red with anger, he’d laugh in the same way you’d laugh at someone who’d react if you used cringeworthy words like “moist” or “panties.”

“It’s just a word,” he’d say, before referring me once again to the imaginary black friend he insisted he had, though he’d certainly never been inside his house.

At a certain point, there’s nothing you can do to convince people like Paula Deen, others of her generation, or even some of those of my own generation, that they are not racist. They don’t believe they are. They honestly think that having a casual acquaintance who is black absolves them. I hope to hell it’s not this way anymore in the South, but I’m guessing that it is still more like that than not in the small town I grew up in.

Some people fight it. Some people escape. I voiced my objections as long as I could, and then I left, which is either an act of sanity or of cowardice. I maintained a loose relationship with my family for a few years until I had a kid of my own. I haven’t spoken now to anyone in my family for six years, and they honestly don’t understand why. They think it’s because “the college boy thinks he’s too good for us” or because I finally got fed up with the proselytizing, which I’d never taken issue with. I feel guilty about it; I feel terrible that I’m depriving my mother of her grandchildren. But I don’t know how to explain to them that I don’t want my kids exposed to that culture of racism (and homophobia and religious intolerance). That no matter how deep your faith, no matter how generous, kind, well-mannered and decent hearted you are, you can’t really be a good person if you are defending your use of the N-word, of if you believe that gays belong in hell. I can separate the good from the bad, but I won’t ask that of my children. And it does no good for me to try to convince my family of this. How do you argue with a racist about their racism when they honestly don’t believe they are racist? It’s a futile argument, the very one that the public is having with Paula Deen.

Paula Deen will continue to make the argument of denial, and she may continue to insist that she believes everyone should be treated the same, claiming it’s the way she was raised. She will believe it so deeply that both she — and the hundreds of thousands of her supporters — will feel crucified by those who pull their support. Paula Deen is a racist, but because of the way she was raised, she may never realize it. So how can you deliver an honest apology when you don’t even understand when you’ve done something wrong?