The movement collapsed on itself, but its legacy lives on with the "secure the border" fantasists 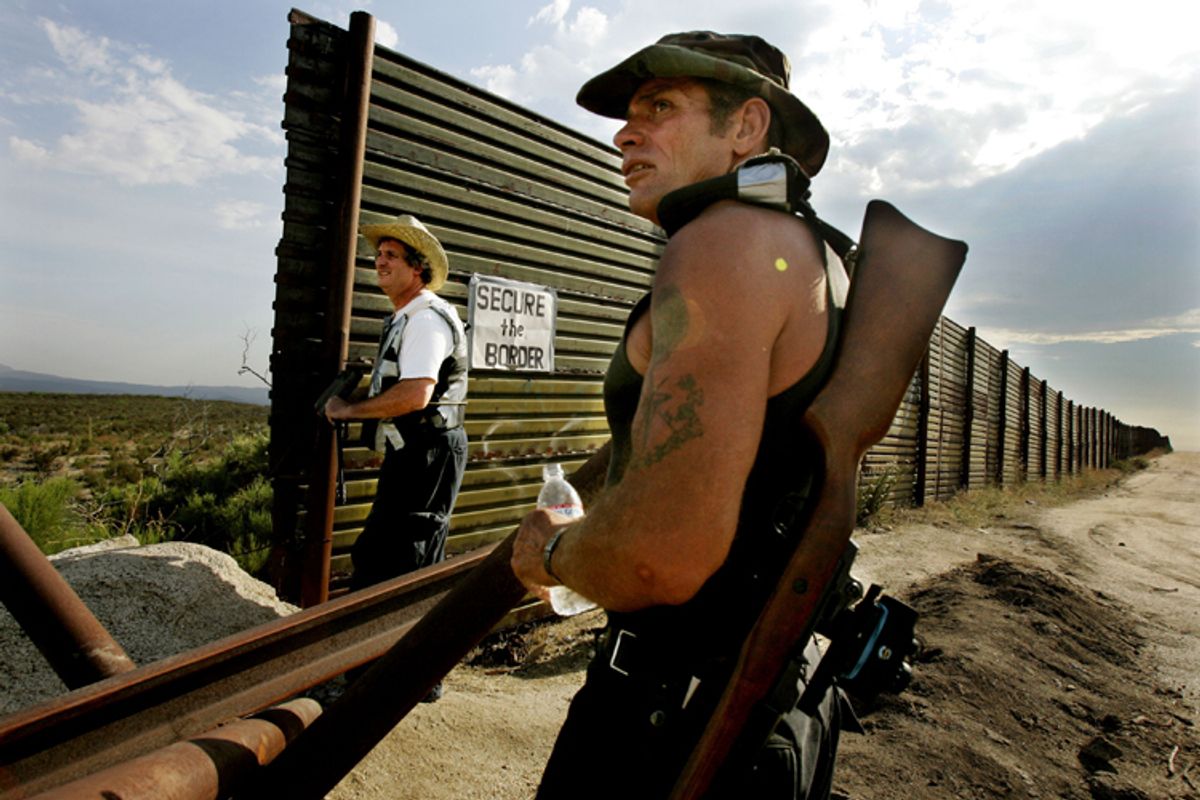 California Minutemen volunteers look over the Border wall for immigrants trying to cross into the United States in Campo, California. (AP/Sandy Huffaker)
--

When people hear House Republicans ranting ad nauseam about “border security” – as will everyone for the next several weeks as a comprehensive immigration-reform measure works its way through Congress – they should remember the Minutemen.

You remember the Minutemen, right? Those noble citizen border watchers, out there braving the desert heat to try to stop brown people from crossing the desert illegally, who were the media darlings of 2005 but who seemed to drop off the radar afterward. The Minutemen changed the national conversation about immigration away from a debate about the state of immigration laws and trade policies and into a laser focus on those lawbreakers coming over our borders in large numbers.

They made “border security” the top priority for every politician in the country (including, it should be noted, President Obama, who has deported more immigrants found to be here illegally than any president in history). When you hear them debate immigration, inevitably you will hear some version of the following: “We need to secure the border first before we can pass comprehensive immigration reform.”

That’s the Minutemen’s legacy speaking. This mindset played a large role in shaping the immigration-reform bill that just passed the U.S. Senate, and it may prove decisive in attempts to pass it through the House. A key provision of the Senate bill, for instance, requires certain border-security benchmarks be met before the government may begin permitting undocumented immigrants to become citizens.

Republicans proposed a number of draconian border-security measures as amendments to the Senate bill, but these were mostly rejected, leading to grousing by House members that the bill coming out of the Senate will have a difficult time passing the House.

“Let them secure the border and we will have an agreement within a month that will be in law, but he [President Obama] has to do the job of making sure that we’re secure in our persons and in our homes,” announced Rep. Louis Gohmert of Texas. “He’s going to need to make sure that people that come in, come in legally. Until he starts actually doing his job, there should be no discussion about doing anything with people who are here illegally.”

This is, however, a classic instance of putting the cart before the horse. Because we will never be able to secure our borders until we fix the broken system that made them insecure in the first place.

“Securing the border” will always remain illusory as long as Americans insist on operating an antiquated immigration system that remains mired in its xenophobic origins, instead of replacing it with an efficient, modern 21st-century system designed to keep the United States competitive in a global economy by providing its economy with the workers it needs in a rational and lawful program, and which eliminates the endless red tape that typifies the current immigrant experience.

We should recall how we got here in the first place: After the North American Free Trade Agreement was ratified in 1994 by the United States, Mexico, and Canada, the Clinton administration began a series of crackdown operations at key ports of entry along the Mexico border. The treaty, which in creating a trilateral trade bloc opened up the ability of investment capital to cross borders freely, was sold to the American public as, among other things, an essential component in controlling immigration.

The Clinton border operations were apparently intended to ensure that, even if capital could now cross the borders freely, labor could not. The first of these was called "Operation Hold the Line", begun in late 1993, and its focus was to clamp down on the steady flow of illegal immigrants who came to the United States through the border cities of Ciudad Juarez in Mexico and El Paso, Texas. By adding manpower and enhancing patrols in weakly secure areas where people traditionally walked across the border, the Border Patrol was able to effectively close off one of the major ports through which people usually crossed on their way north to work. This was followed shortly, in October 1994, by "Operation Gatekeeper" at the San Diego/Tijuana crossing corridor in California.

At first, the Border Patrol boasted of the marvelous success of these operations: Apprehensions dropped precipitously in the months after they were initiated, indicating, according to analysts, "better deterrence": that is, it was believed the programs effectively discouraged people from trying to cross the border. "We can control the border, in fact," boasted Mark Krikorian of the nativist Center for Immigration Studies, which eagerly supported the operations. "But there is more to be done."

In reality, these operations not only eventually proved the futility of an enforcement-heavy approach to securing the border, but they became a human disaster – precisely because immigrants were no longer crossing at El Paso or San Diego. Instead, they were now fanning out into the countryside, attempting life-threatening border crossings in the middle of the desert. Like a river when a boulder falls into its path, the immigrants simply flowed out into the outlying areas.

The numbers kept growing because the tide of immigrants had swollen to a tsunami – in large part because of NAFTA and its effects on the Mexican and American economies. When Mexico approved NAFTA in 1992, President Salinas abolished a provision in the Mexican constitution that protected the traditional small Mexican farmers from competition with corporate agribusiness, particularly American corporations. Cheap American corn put over a million Mexican farmers out of business, and that was just the beginning. With the economy collapsing around them, scores of manufacturers who specialized in clothing, toys, footwear and leather goods all went out of business. The only upside to NAFTA for Mexico – the arrival of new manufacturing jobs, including auto-building plants, as they departed the United States for cheaper shores, and of a fresh wave of maquiladora, the plants where various manufacturers would outsource their labor to Mexico – proved illusory: by 2000, many of those jobs had been taken to even cheaper labor sources in Asia, and the bleeding only grew worse from there.

In the meantime, the American economy – riding along first on a technology bubble, and then on a housing bubble – was bustling, creating in the process in excess of 500,000 unskilled-labor jobs every year, the vast majority of which American workers either would not or could not perform. Yet the antiquated American immigration system only issued 5,000 green cards annually to cover them.

The result was a massive demand for immigrant labor in the United States, and an eager supply in Mexico seeking work – but at the border where a rational transaction should have been taking place, there was instead a xenophobic crackdown aimed at keeping Mexican labor in Mexico, with predictably limited success.

All that really happened as a result of the various border crackdowns was that increasingly desperate people were being forced into longer and more death-defying treks across the desert, and there were more and more of them coming.

So when the wave of immigrants began filtering out into the desert, soon enough, people began dying in large numbers. The chief causes of death, unsurprisingly, were dehydration, sunstroke, hyperthermia and exposure (coming in fifth was drowning: people often died crossing the Rio Grande in Texas). Mind you, immigrant border crossers had been dying on the U.S.-Mexico border for years; the previous peak year was 1988, when 355 people perished while attempting desert crossings or the currents of the Rio Grande. It had declined to as few as 180 in 1994 when, suddenly, it began to rise again beginning in 1995, breaking the old record in 2000 when 370 people died. In 2004, some 460 migrants died, and by 2005, more than 500 people were perishing in the desert.

Those numbers have receded dramatically since 2008 because the Great Recession knocked the legs out from under the U.S. economy, ending a substantial portion of the demand for unskilled labor; at the same time, the economy in Mexico has made a significant recovery, so both the “push” and “pull” components of our most recent immigration wave have all but subsided. In certain sectors of the economy – particularly in agriculture – the demand for unskilled labor remains largely unabated, nonetheless.

On the other hand, a national fetish about “border security” – which seems to entail building a massive fence that has “gigantic construction boondoggle” written over it, and a functional militarization of the border with one of our closest trading partners – will do nothing to address the real issues driving the immigration debate, and in fact will only put that secondary cart before the horse. The people who want “border security” will find it an endless mirage until they fix their messed-up immigration system.

They’re still living out the nativist legacy of the Minutemen. And so it ought to be worthwhile for Americans to remember, or at least be made aware of, just what exactly became of those noble citizen vigilantes.

The Minuteman movement, in fact, crumpled into a heap after 2009, when a leading Minuteman figure named Shawna Forde committed a horrifying home-invasion robbery at the residence of a small-time pot smuggler in Arivaca, Ariz., and shot and killed the man and his 9-year-old daughter and wounded the man’s wife. Forde and her Minuteman cohort are now on Death Row in Arizona, and her former close associates in the movement all denied any association with her – a line largely swallowed by media reporting on the case.

But as I lay bare in my book "And Hell Followed With Her: Crossing the Dark Side of the American Border," not only was Forde closely associated with leading Minuteman figures right up to the day of her arrest, she was amply reflective of the kind of people the movement attracted and who rose to leadership positions within it. (This was borne out again by co-founder Chris Simcox’s arrest last week for three counts of molesting children under 10.) Yes, she was psychopathic, but then, this was a movement whose appeals were virtually tailored to attract dysfunctional and disturbed personalities (which it did in large numbers): profoundly unempathetic, predicated around scapegoating an easily identifiable Other, and inclined to anger and paranoia and ultimately violence.

That is the path down which the Minutemen wanted to lead the country, the well-worn path of nativism, which has a long legacy of misery, suffering and death in this country. When we make a fetish out of “border security” at the expense of rationally fixing our immigration mess, that’s the road down which we’re headed. At some point, we need to get off.