You made Wendy Davis possible 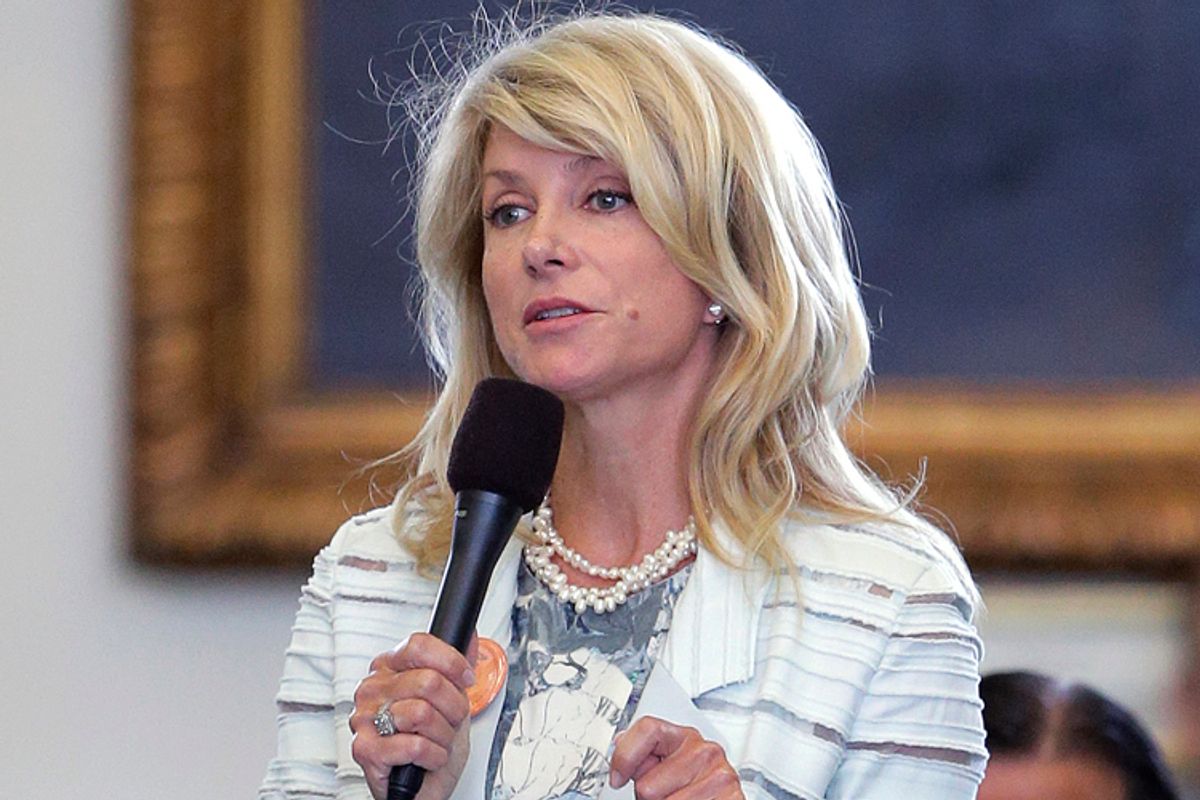 While most of us, most of the time, can be little more than passive observers to the policy-making portion of politics, landmark achievements this week showed that we can be a lot more than that, by turning the results of elections. Even if it doesn’t feel that way sometimes.

The Wendy Davis filibuster in Texas? The Supreme Court decision on DOMA? The immigration bill passing in the Senate? All of them were achievements by ordinary citizens who got involved and affected elections. These things didn’t just happen. They were the real outcomes of citizens voting, in contests that could have gone the other way just as easily.

The United States is an enormous nation, with an enormously complex political system – one that puts no one in charge, but instead relies on separated institutions sharing powers, federalism, and all sorts of other complications. As a result, it’s very difficult, most of the time, to see obvious links between a specific election and a specific outcome. Yes, every once in a while there’s an obvious consequence: no 2008 Democratic landslide, no Affordable Care Act. But frustration is far more common in the Madisonian system.

Moreover, when action does happen – and this week, wow, did we see action! – it’s not always obvious exactly what any of it had to do with past elections. That’s an illusion, however. I’m going to look at the results that left liberals happy, but the same analysis would be true for the Voting Rights Act case and other results that conservatives celebrated.

To begin with: When it comes to the Supreme Court, the first place to look is presidential elections. If there’s one thing that shows elections matter these days, it’s Supreme Court results; each of the nine Justices, and certainly all of them other than Anthony Kennedy, are usually reliable votes for Republican and Democratic positions. That wasn’t always the case, but the last real “mistake” selection was David Souter, 23 years ago, and it’s not likely there will be another one any time soon. Simply put, John McCain would not have nominated anyone who voted the way that Sonia Sotomayor and Elana Kagan voted on United States v. Windsor. We can’t be sure that Souter and John Paul Stevens would have retired if McCain had won in 2008, but all it would have taken was one of them – and it’s also possible that Kennedy would have retired, replaced by a more reliable conservative.

Which gets us to some other elections. Kennedy is there because Robert Bork was defeated by a lopsided 42-58 vote (that’s 42 yes votes; back then, filibusters were rare and a simple majority is all Bork would have needed). Okay, few of you reading this were involved in the 1986 elections – but some of you might have been. You might have helped Kent Conrad win a close race in North Dakota, or Wyche Fowler win a close one in Georgia, or Terry Sanford in North Carolina, or Tom Daschle in South Dakota, or Brock Adams in Washington, or Tim Wirth in Colorado, or Alan Cranston in California – or Harry Reid in Nevada. All of those were close, the kinds of elections where a handful of activists could feel that what they did really mattered. If those eight all went the other way? Robert Bork would probably have been confirmed. No Lawrence. And probably no Windsor.

Yes, that was long ago. Much more recent are the elections that gave comprehensive immigration reform a chance by getting it through the Senate. Again, a handful of close elections over the last few cycles meant that Democrats remained in the majority – think Al Franken’s tiny margin in 2008, or Michael Bennet in 2010, or Heidi Heitkamp in 2012. There are currently 54 Democrats; it really wouldn’t have taken much to give Republicans a slim majority. And, yes, some Republicans supported the immigration bill, but realistically in a climate in which the Republican-led House may well refuse to allow a vote even though there are enough supporters to pass a bill, immigration reform would have died a quick death if Republicans controlled the agenda in both chambers.

But there’s more to it than that. Just as the complexity of the system means that presidents can’t do very much by themselves, it also means that even a lone legislator can sometimes make a big difference. That’s what happened in Texas this week. Any number of generic Democrats elected to the state legislature there might have voted for choice on abortion. But Wendy Davis, as everyone now knows, was no generic Democrat.

Here’s the thing. Wendy Davis won both her State Senate elections by about 7,000 votes each. That’s nothing! But keep looking: Davis got started by winning a city council seat in Fort Worth by all of 350 votes. 350. That’s a few people working just a little harder – knocking on a few more doors, making a few more phone calls, putting up a few more yard signs. That doesn’t happen, and some guy name David Minor gets the political career that she wound up with. Maybe she rallies back anyway, but maybe not. 350 votes.

Now, no one in that city council election thought that abortion rights in Texas were on the line, but I suspect that her supporters then knew her position – and I suspect that most of them were very happy with what happened in Austin this week. Similarly, I’m sure there are people out there who celebrated Windsor this week who fought for Harry Reid in 1986 and never realized that they were really fighting for marriage equality – and people who fought for Al Franken in 2008 without realizing he would have a key vote for immigration a few years into his term.

And so, yes, a lot of people who worked on that Franken campaign and also supported Barack Obama that year have been frustrated by the ways Obama’s administration has fallen short of what they wanted. Fair enough – this is no argument for just accepting whatever elected officials do, party or not. But just remember that a lot of the frustration with Obama, or any president, is a pure function of the political system – and that the flip side of that complexity is that the resources you devoted to Franken (or Reid, or Bennet, or Heitkamp, or that city council candidate that no one has ever heard of, but may make a difference some day) are actually extremely meaningful.