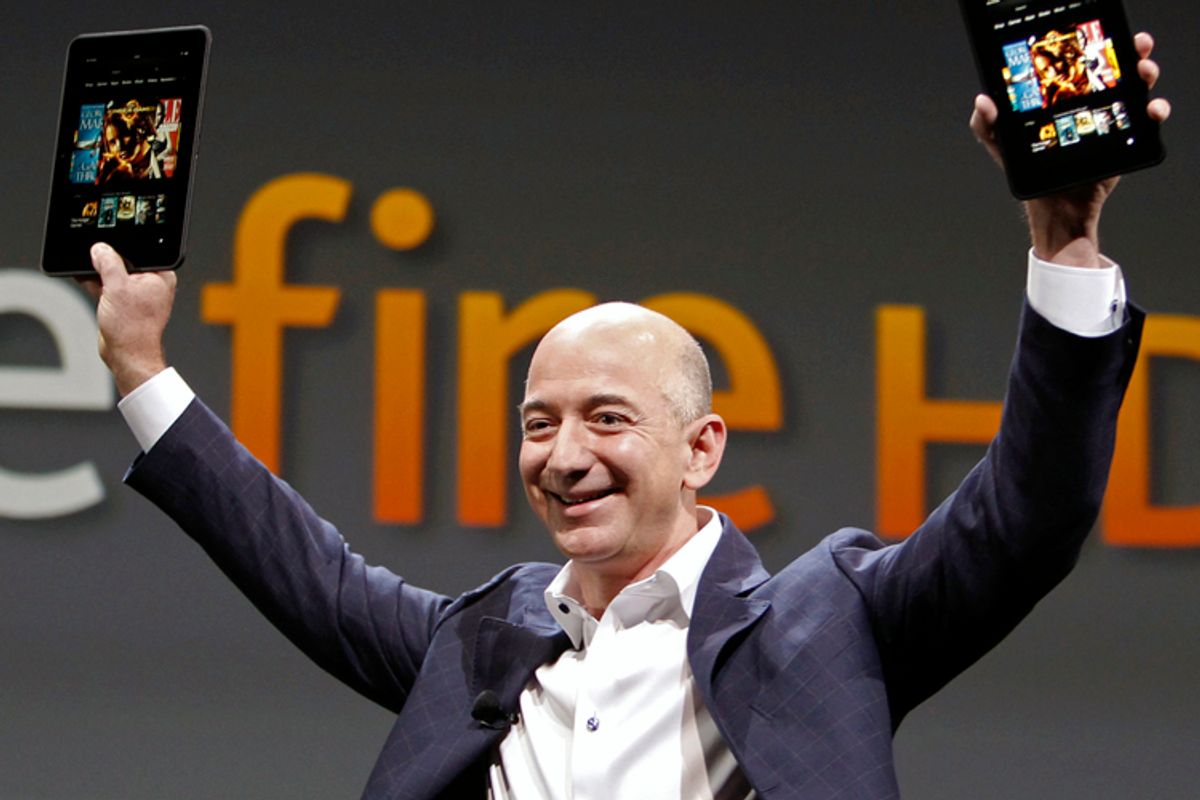 Closing arguments for the Department of Justice's antitrust suit against Apple concluded last week, although U.S. District Judge Denise Cote is not expected to reach a decision for another couple of months. If you've found the case difficult to follow, you're not alone. Still it's worth getting a handle on the basics because the suit -- or, more precisely, the business deals behind it -- have changed book publishing in significant ways. Furthermore, Judge Cote's decision could have impact well beyond the book industry.

Apple was charged with colluding with publishers to fix e-book prices. At the root of the dispute lie two different ways that publishers can sell books to retailers.

First, there's the wholesale model, the way that book publishers have sold printed books to bookstores and other outlets for years. The publisher sets a cover price for a book, sells it to a retailer at a discount (typically 50 percent) and then the retailer can sell the book to consumers for whatever price it chooses.

The other method of selling books is via the agency model, which means, essentially, on commission. The retailer offers the book to consumers at a price the publisher sets and gets a percentage of whatever sales are made. It's rare for print books to be sold in this way, but it's the method Apple uses to sell content like music and apps in its iTunes store.

Until 2010 -- as Andrew Albanese explains in his admirably lucid "The Battle of $9.99: How Apple, Amazon and the 'Big Six' Publishers Changed the E-Book Business Overnight," a new "e-single" published by Publishers Weekly -- book publishers had been selling e-books to Amazon using the wholesale model. They'd simply adapted the system they were already using to sell print books to the online retailer. This, they would soon realize, was a big mistake.

The wholesale model is widely seen as an odd way to sell e-books, since what the purchaser buys is "licensed access" to a digital file, rather than a physical object like a book. But what would torment publishers most about this arrangement was the freedom the wholesale model gave to Amazon to set the prices of e-books.

With the launch of the Kindle, Amazon promoted a low baseline price of $9.99 for most e-books. That meant that Amazon was selling virtually all newly published e-books at a loss. For example: A new book with a hardcover list price of $29.95 would be given an e-book price of $23.95 -- 20 percent less to account for the publisher's savings in printing, binding and distribution. The publisher would sell that e-book to Amazon for $12, and Amazon would retail it for $9.99, taking a $2 loss.

Why would Amazon do this? Observers have proposed several motives. Perhaps Amazon aimed to entice heavy readers to the newfangled Kindle; the customer could tell herself she'd make up the cost of the device in savings on the books themselves. Others have suggested that cheap e-books were loss leaders that drew customers back to Amazon over and over again, presumably so they'd go on to purchase high-margin items like TVs.

The most popular theory by far holds that Amazon intended from the start to totally dominate the e-book marketplace. By using its wealth to subsidize the sale of e-books at a loss, it could drive any competitors out of the market. Bricks-and-mortar chains like Barnes and Noble and online start-ups like Kobo (both of which would introduce their own e-reader devices) or device-neutral rivals like Google would simply not be willing or able to bleed cash as long as Amazon could. And because the Kindle is a "closed platform" -- Kindle e-books can only be read on Kindle devices or apps -- the more Kindle e-books a customer owned, the more reluctant she'd be to switch to a different device.

Obviously, however deep its pockets, Amazon would not be able to go on selling e-books at a loss indefinitely. But once Amazon was cemented in place as the uncontested sovereign of e-book retail, it could do whatever it wanted: force publishers to reduce their own prices, and/or raise prices on consumers.

If this was the retailer's strategy, it was initially an effective one. By the end of 2009, Amazon owned 90 percent of the robustly growing e-book market. Even though e-books still made up a small percentage of overall book sales, publishers finally saw the writing on the wall. Amazon had a near-monopoly and was furthermore devaluing books in the eyes of consumers -- they began to think of books as worth $9.99, not $23.95. Book publishing is a low-margin business to begin with, and the mammoth retailer seemed poised to scrape even those minimal profits away.

At that point, Apple entered the scene with a hotly anticipated new device, the iPad, and plans to open its own e-book store. Needless to say, the nation's largest book publishers looked upon this rich new Amazon competitor with keen interest. The trial at the U.S. District Court for the Southern District of New York this month has provided a record of what happened next.

As narrated by Albanese and other observers of the trial, Apple approached book publishers about making their titles available in the iBookstore. Apple felt that it needed at least four of the "Big Six" publishers to launch the store, and it entered into discussions with all six. Initially, Apple's primary negotiator, Eddy Cue, assumed they'd purchase e-books via the wholesale model. A couple of the publishers he spoke with proposed the agency model for e-books, an idea that had been kicking around the book world for a few months.

Apple liked the idea. So did the publishers -- they would make less money per e-book this way than they did by selling wholesale to Amazon, but they could live with that. What Amazon was doing wasn't sustainable anyway. Under agency terms, publishers could control the pricing of their books and assert that $12.99 to $14.99 was a fair market value for most new titles. Although authors would also receive less in royalties from agency sales, the Authors' Guild endorsed the move as the only alternative to watching "Amazon destroy the physical distribution chain" -- that is, brick-and-mortar bookstores -- in the words of Guild president Scott Turow. (If you want to know why bookstores are especially important to authors, read this.)

However, Apple needed a critical mass of publishers to participate. Otherwise their store would have too few desirable titles. And none of the publishers wanted to be the first to go out on a limb and risk being the only one selling their titles for three to five bucks more than everyone else. Last but not least, Apple knew it couldn't make the iBookstore a success if it sold the most in-demand titles for dollars more than Amazon did.

By early April 2010, when the iPad and the iBookstore officially launched, five of the Big Six publishers had entered into agency deals with Apple. Each of those publishers had also informed Amazon that if the retailer wanted to continue selling their e-books, it would have to buy them on agency terms as well. As the publishers saw it, they'd stood up to a "bully."

Amazon was so infuriated by this development that it punished the first publisher to demand agency terms, Macmillan, by removing buy buttons from all Macmillan books, digital and print, for a week. "We will have to capitulate and accept Macmillan's terms because Macmillan has a monopoly over their own titles," Amazon announced in a message to its customers after it finally restored the buttons -- a curious statement a little like complaining that George R.R. Martin has a "monopoly" on the writing of George R.R. Martin novels.

But Amazon had more than petulant retorts up its sleeve. Days after Macmillan delivered its new terms to their Seattle offices, the retailer sent a white paper to the U.S. Department of Justice, accusing the publishers of violating antitrust regulations. By the next spring, Attorney General Eric Holder announced that the DOJ had filed a civil antitrust lawsuit against Apple and the five publishers who had agreed to sell books with the agency model through the iBookstore.

At issue was whether the publishers "colluded" together to set uniform prices or simply seized the opportunity presented by a new competitor to negotiate better terms with Amazon. DOJ argues that Apple is culpable because it deliberately served as a hub or conduit by which the publishers could reach an agreement among themselves. All five of the publishers, pleading financial constraints, have since settled with the government while admitting no wrongdoing. Apple is the only remaining defendant.

Initially, prospects looked dim for the tech giant. Before the trial started, Judge Cote said at a hearing, "I believe that the government will be able to show at trial direct evidence that Apple knowingly participated in and facilitated a conspiracy to raise prices of e-books, and that the circumstantial evidence in this case, including the terms of the agreements, will confirm that."

However, many close watchers of the trial feel that Apple has made a strong case that if there was any colluding among the publishers, they did not enable it. By setting up agency-model terms with the publishers, Apple was merely making it possible to enter into the e-book retailing market as a competitor with Amazon. The day before closing arguments, Judge Cote remarked that her views on the case "have somewhat shifted." But we probably won't find out how just how much of a shift it's been until the fall.

For Apple, the stakes remain high. If it is found to have violated antitrust law with the iBookstore, it will not be asked to pay damages. Instead, the DOJ will likely demand that Apple clean up its act and insist on overseeing its operations, perhaps as it did in settling the antitrust case against Microsoft in 2001. E-books make up a small sliver of iTunes sales, but the rest of the content offered there -- music, apps, video -- is obtained on very similar terms. Having the DOJ hovering over and meddling in future agreements would decidedly cramp Apple's style. There are also pending and potential civil suits filed by states' attorneys general and consumer groups seeking damages that would get a boost from a decision against Apple.

But for the Big Six publishers, this "defeat" has a surprising upside. They appear to have achieved much of what they wanted in the first place, which was not money but a more competitive e-book market and more control over the prices (and perceived value) of their books. Amazon has ceded 30 percent of the e-book market to competitors, and now buys most of the Big Six's books on agency terms. The prices of popular Kindle titles, especially New York Times Best Sellers are either identical to those in the iBookstore, or at most a dollar cheaper. And as Albanese pointed out recently in Publishers Weekly, even the payouts to consumers mandated by the settlements have a silver lining: The "monies -- nearly $175 million in total ... will be issued almost entirely as credits to e-book consumers’ accounts, meaning those funds will flow back to the publishers, almost like a court-ordered promotion." Sometimes you can't lose for winning.