Here's what all the silly weeping over Google Reader and AltaVista really means: We miss being young and in love 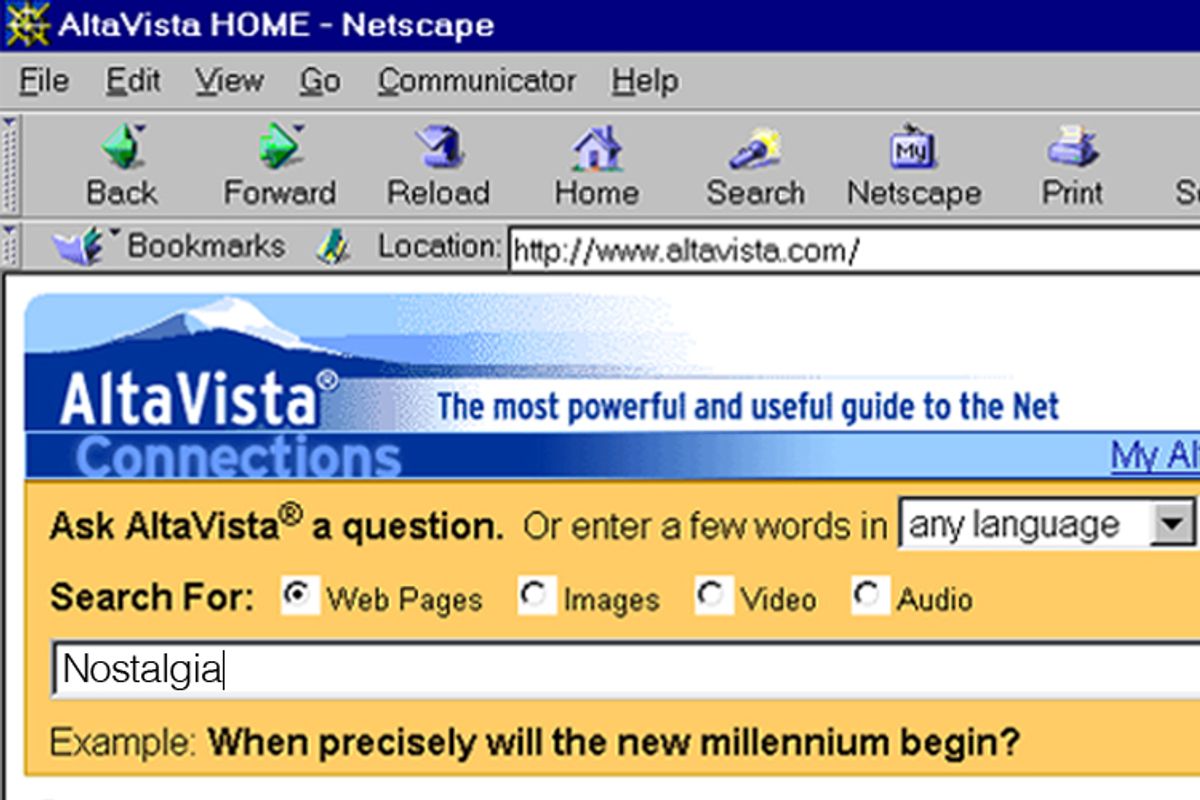 July 1 is here, and Google Reader is still alive. I feel cheated. After all the grief and foreboding that have accompanied the last days of what so many people seem to believe was the greatest blog aggregator that shall ever stride the earth, the fact that the service still exists, at least for today, is hugely anticlimactic. I was expecting a pile of smoking ashes, or at least a 404 message. But it's all there, along with a note reminding us that "Reader will not be available after July 1." So July 2 is actually the drop-dead deadline? That's silly.

So much drama! So much scrambling for alternatives at the last minute! So much nostalgia for those days when everyone had a blog and every post was brilliant and the future seemed so bright ... Wait, did that actually happen? Maybe I'm getting carried away.

It's very easy to get swept away by bogus tech nostalgia. A service hardly has to exist before we mourn its passing. Or it might have been extinct for a decade and we still find ourselves reaching for the hankie. On Friday, Yahoo announced that it was shutting down the search engine AltaVista, which dates back to the Jurassic period of Internet history, once and for all. As if taking Google Reader away wasn't enough of an indignity to suffer this weekend!

I understand why people are agitated about Google Reader. Hundreds of thousands of people were still using it when Google announced its execution. Even though it seems new alternatives to Reader are appearing on an hourly basis, change always sucks when it is forced on you.

But at first glance, I did not understand AltaVista nostalgia. First, I am confident that 90 percent of the people who are shedding a tear at the demise of the first really great search engine had no idea that it still existed, in any form. Second, the vast majority of those of us who are ancient enough to remember using AltaVista left it voluntarily for a very good reason. We found something better. Its name was Google.

Danny Sullivan's memorial for AltaVista includes a chart that shows Google usage passing AltaVista usage in February 2001. The fact that it took that long astounds me. My colleague Scott Rosenberg wrote a column about Google in Salon in December 1998, three months after the company was formed, with the headline "Yes, there is a better search engine." Heartless Darwinist that I am, I switched instantly, even though I had been a prodigious user of AltaVista from practically the day it debuted.

That's how we rolled back in the day, and believe me, there were no bogus tears for the Web crawlers that we abandoned when we saw how snappily AltaVista delivered results. We didn't have time for nostalgia in the mid-'90s! The future was too bright! (Yes, it really was. I'm not making it up this time.)

So why the heck are we mourning what we slew? If I wanted to, I could wrap myself in AltaVista nostalgia as well as anyone. I laid my hands on AltaVista's iron! In 1996, I trekked down south to visit AltaVista at DEC's Palo Alto offices in 1996, and stared in bemused wonder at the DEC Alpha computers processing millions of queries before my eyes. There was a strange romance to the physical embodiment of all those seekers after information. This is what the Internet was all about. People finding stuff. It was so, so cool.

But again, I didn't hesitate when Google came knocking. And I don't care about AltaVista now. I don't think anyone really cares. Some of the people memorializing AltaVista are just putting down markers that stamp them as groovy old-timers. Listen up, you kids, and let me tell you a story when search engines were built from blood and guts and we had to tramp 10 miles through the snow before we found the right set of keywords to get us what we wanted! But we did it without complaining, because we knew we were pioneers on a glorious new frontier!

I think there's something else going on here that stretches beyond posturing, and that connects our Google Reader grumpiness to the search engine wars of yore. I don't think we are remembering the joys of AltaVista so much as we are recalling an era when the Internet seemed a lot more fun than it does now.

There is no question, insufferable as it must be to hear this from a grizzled veteran, that the mid-to-late-'90s were an amazing time to be a geek. We knew we were living through a major historical moment and it was all happening so goddamn fast. You'd wake up in the morning knowing that there was a good likelihood that a better search engine would be invented before the sun went down. A new release of the Netscape browser was greeted with the same enthusiasm that new Harry Potter novels got a few years later. Early adopters ruled the earth.

Yeah, well, 2013 is a different story. Sure, smartphones are neat, but one reason why we are grumbling about Google Reader is because we have learned that things can be taken away as easily as they are offered, and that new is not necessarily better. Facebook constantly drives us crazy with its interface changes because we suspect that the new tweaks are designed more to manipulate us than to serve us. And we understand, right now, more than ever before, that there are nasty quid pro quos inherent in all the "free" cool things we can do online. We know that the Internet is a tool that other people -- governments, advertisers, spies -- will use to find out stuff about us, even as we use it to find stuff for ourselves.

So we're older, wiser and covered with scars. Suspicion and cynicism have replaced that sense of wonder. We see the news about Google Reader and think, man, that permanent upgrade arc is so, so broken! Things can get worse! We see the news about AltaVista and we think, ah, remember what it was like to be young and in love?