Outside his legal team, few have done more to help Trayvon Martin's shooter than Sean Hannity. Here's why 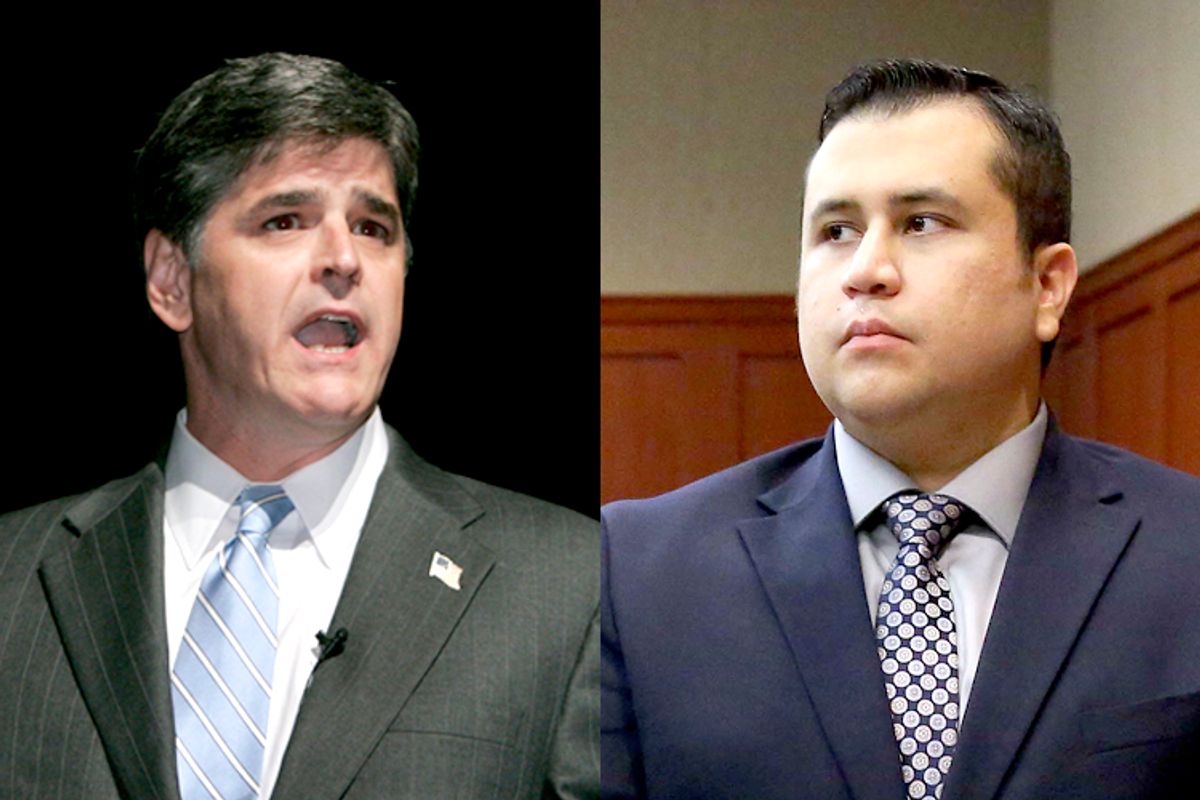 Few outside Zimmerman's defense team have done more to help him than Sean Hannity, who on Friday declared that Zimmerman had already won the trial. "As far as I'm concerned, this case is over," the Fox host said after playing testimony from a witness who said he saw Trayvon Martin beating Zimmerman "MMA style." The day before that, Hannity said on his radio show that the judge should dismiss manslaughter, let alone the second-degree murder charges.

"So the question is why are we here? And the answer to that question is purely political. Politics influenced the decision, the media influenced the decision," Hannity said, succinctly revealing why the conservative media has found itself vocally defending someone who admitted to killing teenager Trayvon Martin. It goes like this: Liberals and the media made hay out of the fact that Zimmerman was initially not charged in the killing of Martin. Liberals and the media are bad. Therefore, Zimmerman must be good.

Hannity and others have sought to portray Zimmerman as the real victim here, of a left-wing media "lynch mob," a term used by Ann Coulter, Tea Party Nation founder Judson Phillips, David Horowitz, and conservative watchdog Accuracy in the Media, among others. When NBC aired an edited 911 call that made Zimmerman look racist, that was all the proof conservatives needed.

And if reflexive hatred for the media wasn't enough, add to the volatile mix gun rights and perceived racism against whites. "Mr. Zimmerman -- who, again, the New York Times refers to as a 'white Hispanic' and the rest of the media has now picked that up, 'cause that fits the template. You need white-on-black here to gin this up," Rush Limbaugh said last year on his radio show. Hannity couldn't help but bring up the New Black Panthers in an interview with Zimmerman, which focused on how unfortunate it was that the defendant's name had been dragged through the mud.

Zimmerman's father wrote an e-book calling the NACCP, the Congressional Black Caucus and other African-Americans the "true racists." The CBC, for instance, is “a pathetic, self-serving group of racists ... advancing their purely racist agenda.”

Indeed, Zimmerman and his family have often egged on the right-wing media's support, adopting their language about the dreaded MSM. "The media is very good at putting their own spin on what they want the narrative to be," Zimmerman's brother Robert said in court earlier this month. "I'm not employed by NBC, CBS, ABC or anybody else. So I don't have bosses, I just try to me as honest as I can." In fact, Zimmerman got himself in trouble for being too close to the conservative media when his legal team quit last year, citing a phone call to Hannity that they had not authorized.

At times, things have gotten ridiculous. Fox News even recently speculated that Martin could probably kill someone with the Skittles bag and Arizona Iced Tea bottle he was carrying.

Meanwhile, conservative blogs set to work painting Martin as a dangerous thug. The Daily Caller obtained Martin's Twitter feed, selecting tweets that made him look most intimidating. For George Zimmerman, his lawyers are not his only defense team.