Tweets about Sunday TV have taken on their own form of humor -- fun if you're watching, obnoxious if you're not 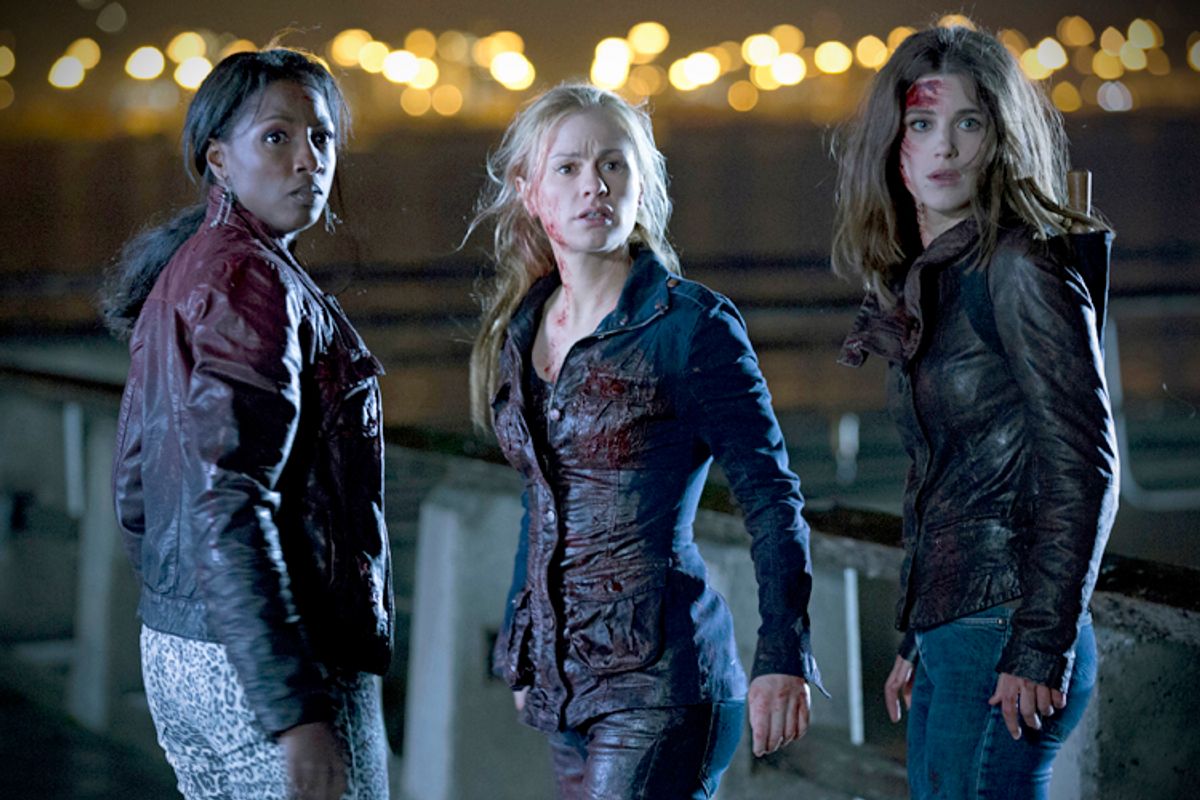 Blocking someone on Twitter, ensuring you’ll never see their tweets, is the nuclear option -- better reserved for trollish, harassing enemies online who won’t stop making fun of your avatar than for amiable-seeming supporting players on a TV sitcom. And yet recently I found myself blocking Retta, who exhorts her co-workers to “Treat yo’self!” on “Parks and Recreation” and whose observations on TV as it happens (or, sometimes, as she's catching up later) garner retweets from many people I follow.

It wasn’t her -- it was me. I’d grown tired of a new manner of speaking on Twitter of which Retta was merely a popular example. Particularly when talking about an episode of Sunday television, it seemed, everyone I followed on Twitter spoke in a language that I just couldn’t get into; a patois of oblique references (so as to prevent spoilers) and gleeful, headlong description of whatever was happening in front of them. If you weren’t watching live, as I generally was not, you were missing all the fun, not merely because you didn’t get the reference, but because the reference was the entire substance of a sort of half-joke.

I don’t plan to start watching “True Blood,” although I guess these tweets would be funny if I did? Sorry, Retta.

Not that she's alone. I searched Twitter at 9:09 p.m. Eastern time for "True Blood" and immediately was deluged with oblique tweets that said next to nothing -- unless you were watching the show already, in which case they said it all.

“I try to avoid Twitter on Sunday nights because of precisely what you describe,” Jacob Silverman, a journalist working on a book about social media, told me. “It gets a little suffocating. What you see a lot is people forming their own tribes or communities, and as the same people start talking to each other, there's a lot of mirroring of speech, with the same jokes and tics.”

The most common, at least in my own Twitter stream, are either absurdist and fantastical comedy, which puts a twist on characters with whom I’m not familiar, or flat tweets asking Walter White what he just did, which have the effect both of conveying a shared experience and making it impossible for those who aren’t watching the show at that exact moment to find a point of entry (anecdotally, “True Blood” fans seem to be the least apt to make jokes). As Tricia Lockwood, a Twitter user who no longer uses Twitter on Sunday nights, said: “I do have memories of my timeline being completely taken over on Sunday nights by shouts of ‘METH, CAN YOU BELIEVE IT’ and ‘DON DRAPER IS DRINKING ALCOHOL’ and ‘ELVES ARE BEING MURDERED IN A SEXUAL BLOODBATH,’ etc. Or whatever is happening on 'Game of Thrones,' which I've never seen a single second of.”

Of course, one doesn’t tweet for the delectation of everyone in the world, but at least (unlike Retta, who is very polite about this) the tweeters could include hashtags, so they could be “muted” on many Twitter clients. Without them, Twitter goes from a mix of information and jokes to incomprehensible updates on the goings-on of Sookie Stackhouse et al.

As Tess Lynch, a writer for Grantland who covers entertainment, put it: “It's really interesting how Twitter's normal shorthand becomes even more concentrated because everyone's watching the same thing. It's always brief and because you choose your feed it's usually the same points of reference. Then when everyone is watching the same thing -- it's not quite like ‘Mystery Science Theater.’”

But when you’re not watching the same thing, it can be maddening. Though Lynch noted that seeing others’ enthusiasm for a show you don’t watch “works as a good hook” -- how many new “Game of Thrones” fans will be minted starting next season, after 1 million tweets went out referencing the Red Wedding? -- it can also be alienating running up against the expectations that you'll react to the show in the way you've seen others do already. “I had the anticipation of feeling how fans feel about 'The Walking Dead,'” said Lynch. “And I wasn’t really able to connect with it.”

"Ten years ago, watching 'Arrested Development' and getting the DVDs of the British 'Office,'" Lynch continued, describing shows that caught on in popularity over time as people caught up, "you had this objective silence. You had the show as a fresh thing for you and you could have a deep and personal connection. But now you have a connection ready-made for you and you have to confront your feelings up against other people's feelings. It's daunting."

Tweets about a show have become yet another metric of success -- with “Scandal,” on ABC, sold on the strength of its Twitter following. And yet is it becoming impossible to use the social network during the weekly broadcasts, or to watch any show after it airs because it'll be spoiled not by revealed plot details but by a pre-masticated declaration of How You Should Feel? Is Twitter making every night Oscar night or the Super Bowl -- and would anyone want to watch the Super Bowl a day or a year later?

Maybe I’m being too pessimistic. “It's so fun to watch someone reacting to something every 10 seconds. It feels nice where you have a stream where everyone's sharing the same emotion at once that's expressed in stream of consciousness bursts,” said Nick Douglas, who wrote the book “Twitter Wit.” There is, to live-tweeters' credit, something lively and jazzy about Twitter during TV broadcasts, something that feels more akin to how TV is watched than the dense, literary, allusive recap culture that’s sprung up in the past five years.

It’s a sign of health for the television industry that it has such power over Twitter, that every big TV show is on par with the State of the Union. And yet it may be killing the user experience. “Twitter is generally terrible whenever everyone's talking about the same thing, which happens whenever ‘big news’ is going on,” said Dan Nosowitz, a friend who writes for Popular Science. “Anything from the Oscars to a school shooting is going to make Twitter pretty much unbearable until the last gasps of topicality have stopped. I usually don't even bother reading it during that stuff; it's like watching the moderately polluted East River turn into a mutant, monstrous Gowanus Canal that threatens to drown us all in sewage and hashtags.”

As time has gone by, though, Twitter has gotten not just more annoying when I’m not watching TV on a Sunday night but more vital when I am. I came to feel bored while watching “Game of Thrones” even 15 minutes time-shifted, so I couldn’t engage with people online, who had begun to affect the manner in which I watched it, who I rooted for, and what about it I found satisfying -- less the big moments than the nuances my Twitter pals called my attention to. As Lockwood said: “A timeline is an environment, an ecosystem: You operate within it, and small and large changes within that environment eventually change you. Which frightens some people, but not the people who like to live there.” Maybe I’m a little bit Retta, too. But when my shows aren’t on on Sundays, I’ll stick to reading a magazine.