Forget what cynical pundits say. Democrats need to win states like Texas and Kentucky, and fed-up women are the key 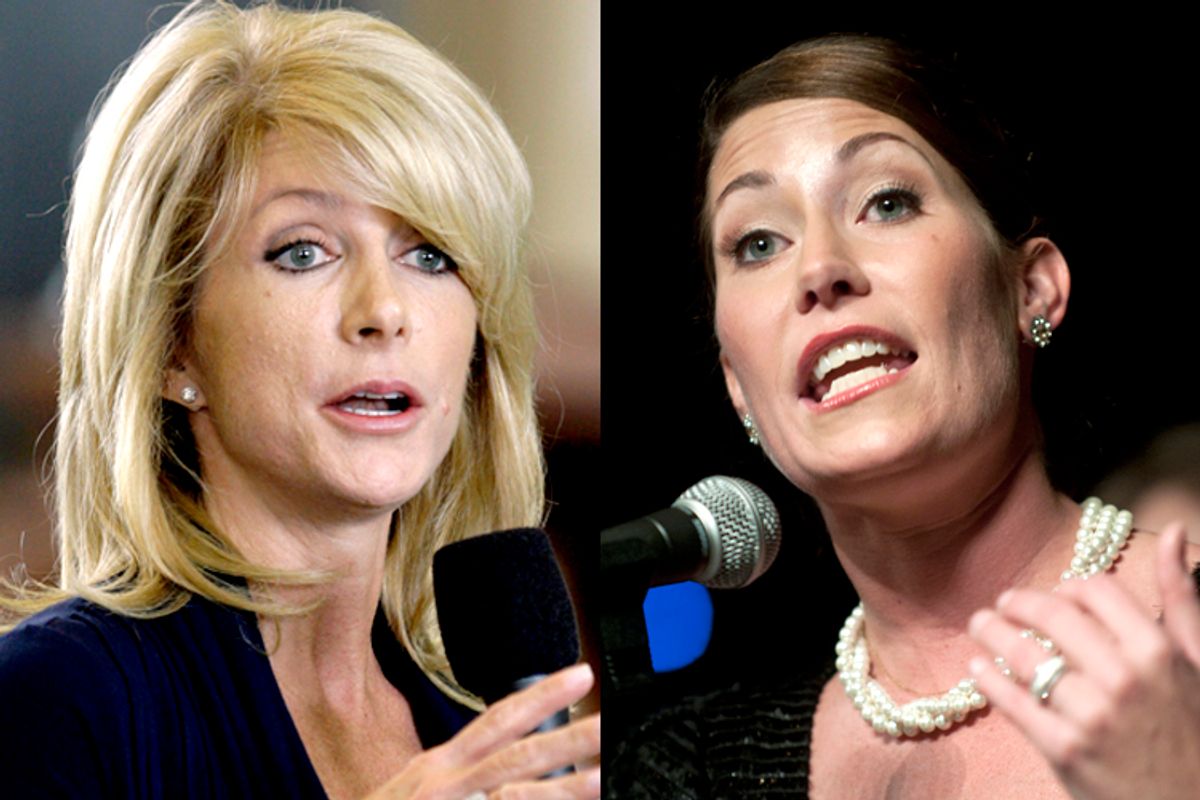 Public Policy Polling is out with a new survey showing that Texas Gov. Rick Perry has actually increased his lead over state Sen. Wendy Davis in the wake of her nationally heralded filibuster against SB 5, the draconian antiabortion legislation Perry’s trying to pass in a second special section. It should be noted that Davis isn’t even a candidate for governor at this point, so this is a theoretical matchup absent any kind of campaign.

Still, the poll numbers are likely to bolster the already strong cynicism of Texas political observers about the chance that Davis could beat Perry if she fulfilled the dream of many liberal women nationwide and ran against him next year. Similarly, most journalists dismiss the chance that Kentucky Secretary of State Alison Lunderman Grimes can knock off Sen. Mitch McConnell. But the rise of these red-state women is good news for Democrats, even if pundits say they can’t beat right-wing veterans (and national villains among liberals) like McConnell and Perry next year (and I’m not conceding that here). In most red states, the best hope for Democrats is a rising coalition of Latinos, black people, Asians, young voters and white women. Davis and Grimes could accelerate the future.

I’ve been struck by even liberal Texas reporters minimizing Davis’ chances, and suggesting that the national groundswell of support will hurt her in her home state. Writing in the New York Times, Texas Tribune reporter Jay Root reports that it “puzzles” Matthew Dowd, a former George W. Bush strategist, that Davis and her backers “are allying themselves with Hollywood actresses and handing Mr. Perry the ideological battle he so desperately needs to revive his standing — at least with the right,” Root writes.

“The best thing to do with Rick Perry is to make people laugh at him,” Dowd told Root. “If you get into a sort of ideological thing, and into a back and forth, that’s how Rick Perry survives.”

Another Texas Tribune writer, Ross Ramsey, wrote a piece headlined “For Davis, Opportunity Knocks at Inopportune Time,” arguing that the Fort Worth Democrat is little known outside her district and the state party is poorly organized to give her a statewide lift. “It’s her bad luck that she’s the fastest runner on a team that can’t seem to find its way to the track,” he writes. But then he concludes his piece by seeming to contradict it, claiming that if Davis doesn’t run now, “she’ll never have a better shot.” That’s puzzling – to follow his logic, she’d have a better shot if Democrats were better organized in a few years. So I’m not convinced anyone knows for sure that Davis can’t beat Perry.

The truth is, I’m a lifelong blue-state resident, and I don’t presume to suggest I know Texas politics better than these men. I was convinced Rick Perry humiliated and hurt himself with his laughable 2012 presidential run, where he famously forgot the agencies he wanted to cut and made sweet love to a bottle of maple syrup. Instead today he’s stronger than ever with his Texas GOP base. But I do know this: Red-state Democratic women are the ones fighting the toughest battles on behalf of women’s rights – and they seem pretty happy about the attention.

On Tuesday alone, new abortion restrictions took effect in five red states -- Alabama, Indiana, Kansas, Mississippi and South Dakota – all passed by Republican legislatures and signed by Republican governors. Kansas’ new law requires abortion doctors to tell their patients right-wing lies: that an abortion puts them at high risk for breast cancer (totally unfounded by science) and that after 20 weeks, a fetus feels pain and “abortion will terminate the life of a whole, separate, unique, living human being.” Again, medical experts say neither is true. In South Dakota, women must wait 72 hours before obtaining an abortion – and weekends don’t count, which means some women will wait six days. Indiana women must undergo ultrasounds. In Mississippi and Alabama, women can no longer obtain a prescription for an early abortion drug via teleconference; they must now go to a doctor’s office. The hypocrites who claim to oppose late-term abortion are ensuring that all abortions will at least be later-term in these states.

Even as women’s votes were credited with reelecting President Obama on the national level, statehouse Republicans are restricting their rights. So national feminists and Democrats have got to turn their attention to these red states, along with purple states like Wisconsin and Ohio where Scott Walker and John Kasich are acting like they govern Mississippi when it comes to women’s rights. Ohio state Sen. Nina Turner's decision to run for secretary of state is welcome news, in a state known for its attempts to limit voting rights (as well as its failure to elect any black Democrats statewide, ever).

We know that eventually, Texas will be a blue state. That day will arrive sooner if Latino voter turnout rises. Texas women’s groups are paying a lot of attention to the Latina vote, since Latinas are less likely than other groups to go to the polls. Young Latinas are also more likely to be pro-choice, so this is an opportunity to use this battle to make more of them voters.

At any rate, I find it encouraging to see national Democrats paying attention to Texas, with projects like Battleground Texas driven by Obama campaign veterans, most notably Jeremy Bird. Nobody expected Obama to pour money into Texas or Kentucky in 2012; the goal was to win, and there were plenty of states where he had a better chance, as well as some purple states, like Ohio, that he couldn’t afford to lose. But it’s unconscionable for national Democrats to ignore opportunities – and need – in the state that gave us Ann Richards and Barbara Jordan.

Likewise, I’d like to see national Democrats more engaged in the Grimes race. She’s gotten criticism for a lackluster announcement on Monday and her Web presence is minimal. McConnell is unpopular in Kentucky and knocking him off in 2014, while unlikely, would be a sign that Democrats will leave no state behind. McConnell’s campaign gave Grimes a favor Tuesday by releasing a bizarre autotuned ad that made fun of her name but actually served to get me to be able to type it from memory. (Oh, and they misspelled McConnell’s name in the ad.) So his team may not be the second coming of Obama 2012.

Meanwhile, the Texas battle over abortion rages on, with the Legislature expected to vote next week in the second special session called by Perry. I got into a little Twitter discussion with Matthew Dowd, after I Tweeted that he’d “trashed” the involvement of Hollywood actresses in the Times piece. “Wasn't trashing celebrities, was just saying [Davis] only helps Perry by involving national media and celebs.” Point taken; trashing was useful shorthand in 140 characters; "dismissing" or "disdaining" would have been more accurate.

But Dowd knows Texas past and present, not necessarily its future. I’m not ready to concede that Planned Parenthood’s wrangling television stars like “Law and Order: SVU’s" Stephanie March (a Texas native), Lisa Edelstein of "House" or Connie Britton, who played Tami Taylor in the legendary Texas football series “Friday Night Lights,” are just “Hollywood” liberals who are going to drive more Texans into the arms of Rick Perry.

That PPP poll that found Davis trailing Perry also found that she’d doubled her in-state name recognition, from 34 percent to 68 percent, since January. More significant, she is now the best-liked Texas political figure among those PPP tested statewide -- and the third-best-known after Rick Perry and Ted Cruz.  That’s not bad for a Fort Worth lady in tennis shoes. National Democrats are going to keep paying attention to Texas; the women of Texas deserve no less.