...Or Leslie Knope, or Tami Taylor. The filibustering Texas state senator deserves to be discussed on her own terms 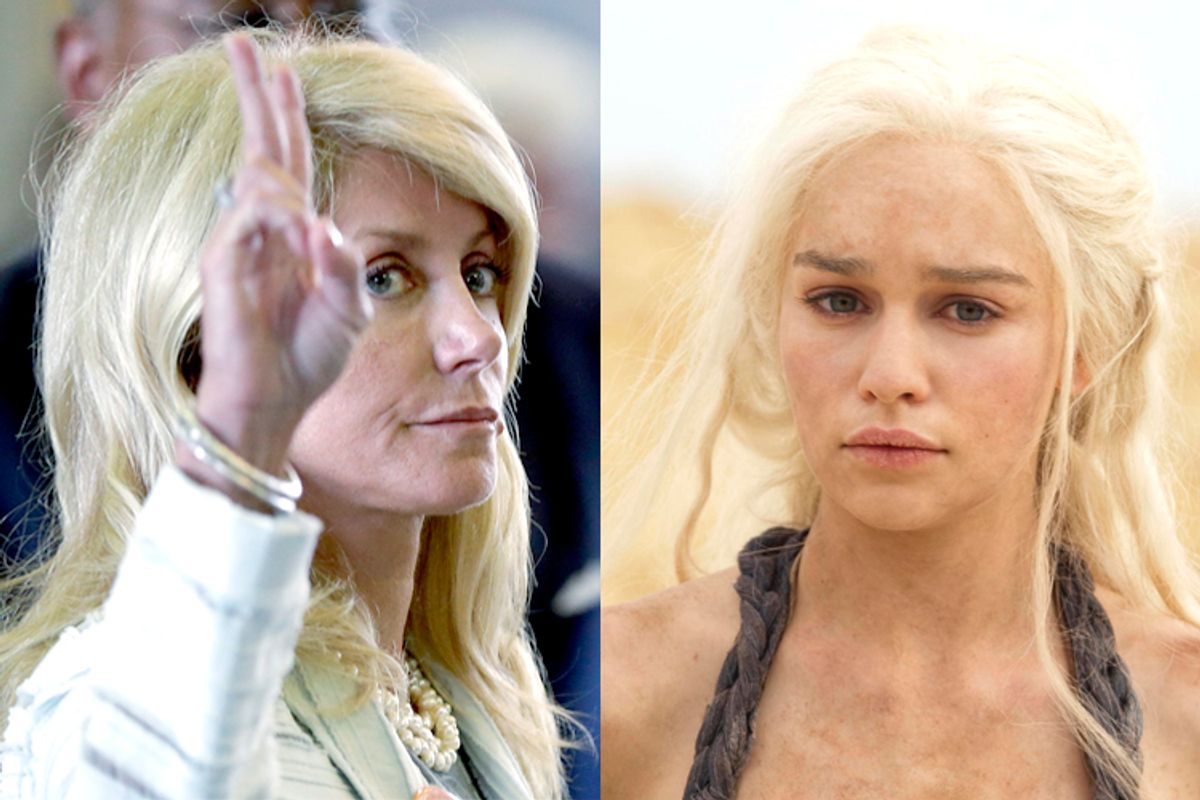 Sen. Wendy Davis, D-Fort Worth, left, votes against a motion to call for a rules violation during her filibusters of an abortion bill, Tuesday, June 25, 2013, in Austin, Texas. Davis was given a second warning for breaking filibuster rules by receiving help from Sen. Rodney Ellis, D-Houston, with a back brace. (AP Photo/Eric Gay) (Eric Gay)
--

Wendy Davis' filibuster against a restrictive abortion bill on the floor of the Texas Legislature last week immediately became the stuff of legend -- and though Democrats' battle in Texas continues, Davis' admirers have taken her crusade from the realm of the political into the stuff of pop culture.

Comparisons between Davis and just about every popular female television character of the last few years have sprung up across the Internet -- most commonly, to Emilia Clarke's Daenerys Targaryen from "Game of Thrones," Amy Poehler's Leslie Knope from "Parks and Recreation," and Connie Britton's Tami Taylor from "Friday Night Lights."

The last one makes sense, sort of -- Davis and Taylor both are Texan women with teased heads of blond hair. It was little wonder that fans of "Friday Night Lights" started comparing the two even as the filibuster was going on.

But while Taylor is a virtuous character through and through -- so much so that Planned Parenthood can feel good about selling "What Would Tami Taylor Do?" shirts with the actress Britton's cooperation -- other comparisons are a bit more troubling. In the past season of "Game of Thrones," Targaryen (whose dragon alit on Davis' shoulder in a much-shared image) found herself enacting brutal, violent vengeance when she wasn't condescendingly coming to the aid of brown people in a tone-deaf season finale; more crucially, she was tangent to the main action of the show, wandering in the wilderness and fighting wars of pique. It's hardly the model a politician discussing one of the most crucial issues of the day would hope to emulate. And Knope, whose name appeared in a headline about Davis' feat instead of Davis' own, is (in this viewer's understanding of the show) a fundamentally ineffective politician who gets hung up on small details, makes gaffes constantly, and invariably has to backtrack in order to preserve small victories. She succeeds in spite of her benighted constituents; Davis succeeded on behalf of hers. Sure, her idealism is heroic -- but so is Wendy Davis', and Davis' is real.

"I was thinking they'd compare it to 'Mr. Smith Goes to Washington,'" said Mary Beth Haralovich, a professor at the University of Arizona and the author of "Television, History, and American Culture: Feminist Critical Essays." Not so -- though Frank Capra's film depicts a filibuster, it's somehow less apropos to Davis' feat than a woman whose hair has its own Tumblr. It's almost as though the easy iconography of TV stars makes it easy to contextualize Davis' work as the satisfying season finale of a show we just found out about, rather than an act with its own rather dispiriting context. "There's so much pleasure in strong female characters in television," said Haralovich. "When you see one in real life, it's a great compliment to the TV characters -- look, there's someone in real life who has those qualities." But if it's a compliment to the character, it would tend to reduce the real woman.

The TV comparisons also pointed out the relative dearth of high-level female politicians in real life, much as comparisons of Barack Obama to fictional black presidents in "24" or "Deep Impact" -- or a (literally) alien creature from "Star Trek" -- pointed out how novel his candidacy was. "My first reaction was that the comparison of a woman standing up and doing her job being compared with fictional characters suggested we have such a dearth of nonfiction political characters that there's nothing beyond these fictional renderings," said Amanda Lotz, associate professor of communication studies at the University of Michigan and author of "The Television Will Be Revolutionized." "As a culture, we aren't really sure how to understand women in power." She noted that the recent past has been a boom period for portrayals of complex and powerful women on television, including the short-lived Geena Davis series "Commander in Chief," a show that tends to come up whenever a woman seems to have ambitions toward the Oval Office.

Geena Davis played an independent, and Knope, Targaryen and Taylor are all removed from the rough-and-tumble of national politics. Citing three of the most visible Democratic women in America, "The Feminist Spectator as Critic" author and Princeton professor Jill S. Dolan said: "Instead of comparing Wendy Davis to Hillary Clinton, it's easier to compare her to Tami Taylor. Tami Taylor is not real. She doesn't have the chance to make the mistakes Hillary Clinton, Michelle Obama or Nancy Pelosi make. And we have them all in common. People like Tami Taylor and the Amy Poehler character are just easy references to make to clarify the point."

The up-and-down career of Clinton in particular is exemplary; unlike Taylor, who creamily held the viewers' attention for five critically beloved seasons, Clinton has seen her popularity ebb and flow. By comparing Davis to Taylor, filibuster-watchers are sending the message (if inadvertently) that Davis lives in a universe constructed for their momentary entertainment and joy, not for the long term. If and when a restrictive abortion bill does go through in Texas or Davis falls short in an uphill battle for statewide office, the channel is easily changed.

But perhaps -- given that Davis' characterization speaks to a larger problem of the absence of women at the highest levels of politics -- comparisons from the TV Guide set are a problem for another day. "I don't have a big problem with Wendy Davis being compared to strong and compassionate figures in popular culture," said Jennifer Pozner, the founder and executive director of Women in Media and News. "The Washington Post spending so much time talking about her pink sneakers -- I'm sorry, 'rouge red' -- that's more trivializing than referring to her with metaphorical allusions."