Barack Obama talks like a constitutional lawyer, but acts like Dick Cheney. Snowden shows it's the same old America 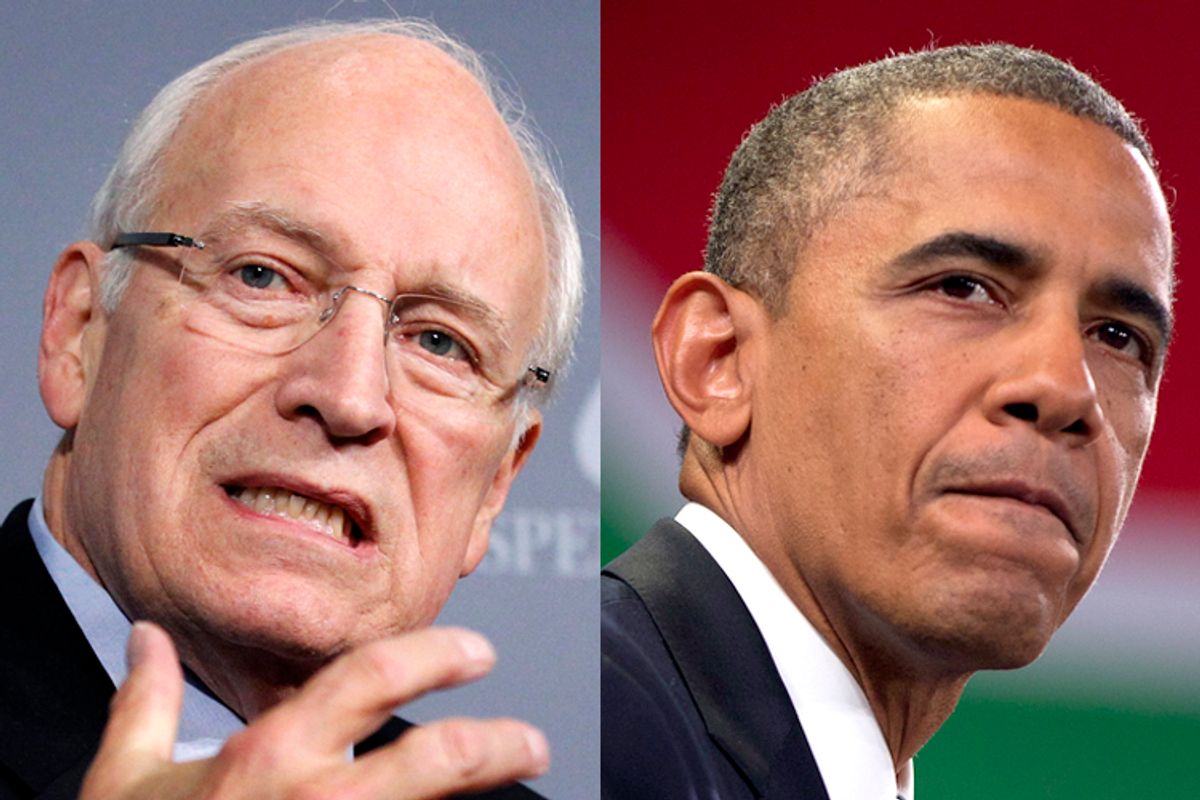 Edward Snowden has been on the lam for nearly three weeks now. The 30-year-old computer whiz has gone from Hawaii to Hong Kong to Moscow since revealing official eavesdropping and hacking practices that Americans, along with everyone else, have an urgent right to know about. The denouement may come any time now. I wish Snowden luck in finding a new, humane home.

In the meantime, let us not miss something else that has come harshly to light in the course of Snowden’s flight from U.S. authorities. Without even meaning to, America’s latest whistle-blower has made an important point about the nation’s place in the 21st century world. And no, it is not a good place.

Have you noted the extent to which Washington has failed to influence the governments that have harbored the National Security Agency’s former contractor? Have you heard or read the hostile outbursts greeting news that the NSA has been bugging computer networks and telephone circuits all over Asia and Europe? Most recently, have you detected the Obama administration’s disgraceful arm-twisting as it tries to dissuade potential providers of asylum?

These responses put another question on the table, and do not think for a moment that the White House is not asking it. There is the validity or otherwise of what Snowden did — as a matter of law, civil disobedience, conscience, human rights, ethics and so on. Now there is the question of how the U.S. will respond to the reality of its waning global influence and whether Obama has repaired any of the widespread alienation accrued during the eight years his predecessor spent in the White House.

“America is alone in the world,” an Italian journalist named Luigi Barzini observed just after World War II. Barzini wrote out of admiration — praise for the victor. But now we stand on the darker side of the moon. Americans are alone less because of their power than because they are out of step in a world — the post–Cold War world — that they fail to understand.

Things sometimes come across by the oddest means, but this is part of what Edward Snowden’s so-far-successful escape from injustice (as I see it) unwittingly demonstrates. So far in this unlikely tale the U.S. has turned out to be the clumsiest player on the stage.

At this writing, Snowden remains sequestered in the transit lounge of Moscow’s international airport. One by one, the 21 nations to which he has applied for asylum are turning him down. The biggest surprise is Ecuador, whose social democratic president, Rafael Correa, began by speaking highly of Snowden’s commitment to universal rights. When a U.S. congressman suggested that Ecuador’s trade privileges may be denied if it gave Snowden safe harbor, Correa repudiated those arrangements without hesitation.

But Vice President Joe Biden seems to be working the phones. After speaking with him earlier this week, Correa cannot get far enough away from the Snowden question. That is American power, one has to say (even if Correa never will). But it is a kind of power — a 20th century exercise of power — that is outdated and will win the U.S. only the most reluctant of “friends.”

Snowden’s best chances of asylum now are said to be Venezuela, whose president, Nicolás Maduro, happens to be in Moscow to meet President Vladimir Putin, and Bolivia. Think about this for a moment. Both of these nations are social democracies. And to one extent or another, Washington has made an enemy out of each one.

It is to such places that the Obama administration seems to chase people who cross the NSA. But we ought not miss the extent to which Obama has provoked a raging backlash across Europe and elsewhere — not so much among conservatives, but among those who used to look to him for a less obnoxious America than the one George W. Bush sponsored.

I stand with the disappointed many. For a time it seemed that Obama’s surprisingly aggressive policies abroad reflected the hidden power of the defense and security establishments. As in, “Look, this is how we do it and here is where we draw your line. Cross it not.” It has also seemed possible that Obama may be acting out a Democratic Party dodge that goes back to the Cold War: If you don’t want to be called “soft on security,” better to look tougher than the hawks.

Neither of these explanations holds up any longer. There is no sign that the president is less than fully committed to an imperial presidency and to surveillance and espionage practices that exceed the Constitution and international law. A Turkish professor put it this way in a conversation with the Financial Times the other day: “He talks like the head of the American Civil Liberties Union, but he acts like Dick Cheney.”

Could one put it better? It is going to prove a costly mistake, this inability to do things differently in a different world. The Bush II years were one great big missed opportunity. And the Snowden affair suggests Washington has learned no lessons. Imperial decline, anyone?

Certain American leaders — O.K., a very few — seem to grasp how power and influence are to be exercised in the 21st century. Secretary of State John Kerry is laboring to convene a Syria conference and to reconvene Mideast talks, and he has been silent on the NSA’s goose chase. Kerry may be one of these leaders. Obama does not seem to be — or maybe that is it precisely: His job is to seem to be.

Patrick Smith was the International Herald Tribune’s bureau chief in Hong Kong and then Tokyo from 1985 to 1992. During this time he also wrote “Letter from Tokyo” for the New Yorker. He is the author of four previous books and has contributed frequently to the New York Times, the Nation, the Washington Quarterly, and other publications.