The actor's turn as a Comanche character is another chapter in an ugly racial history, experts say 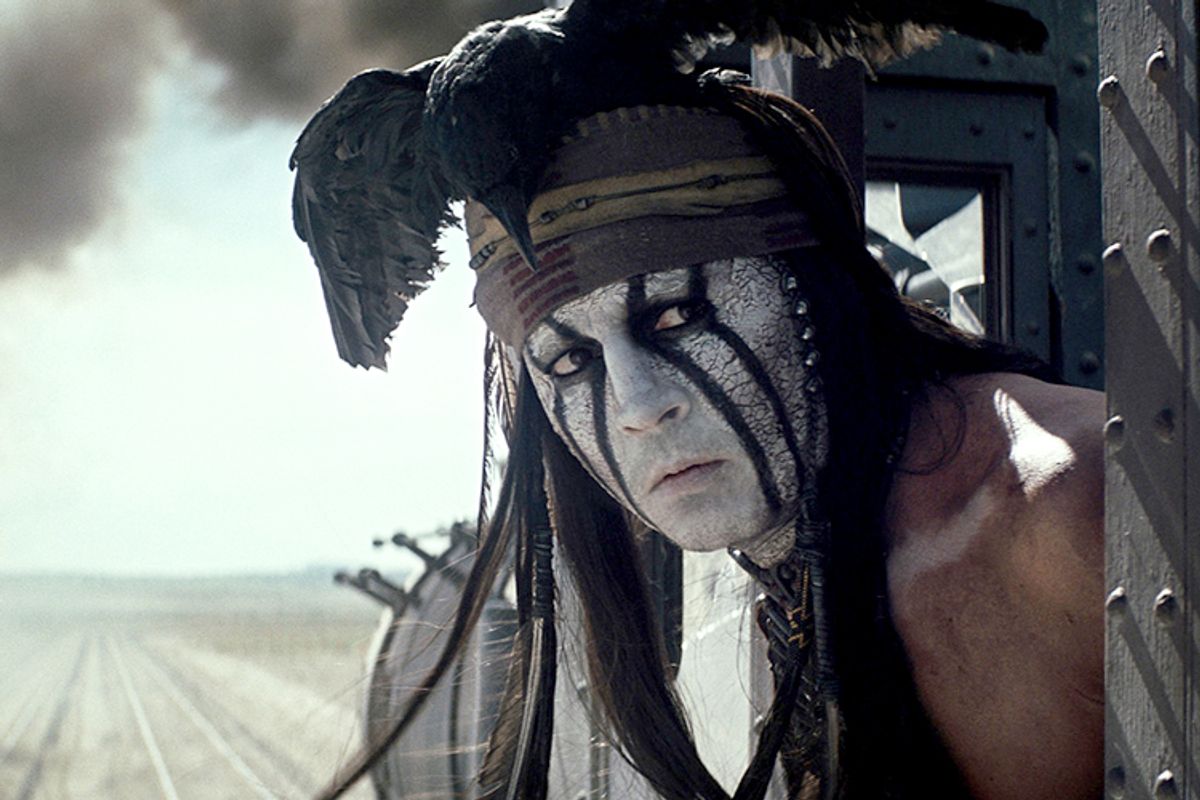 Johnny Depp has tossed on a lot of outlandish costumes in his long career. In the "Pirates of the Caribbean" franchise, he plays a buccaneer; in "Dark Shadows," a vampire; in "Charlie and the Chocolate Factory," an androgynous confectioner.

And with today's new release "The Lone Ranger," he's adding "American Indian" to the pile of personas he's tried on -- and scholars of American Indian history are not pleased.

Depp, who has claimed in the past to have Indian heritage (a claim that Indian Country Today, a media network for the American Indian community, has contested), is playing Tonto, one of the longest-running Indian characters in American media. It's also an intensely problematic one. Depp, who was adopted into the Comanche Nation after signing on to "The Lone Ranger," claims that his role is a "salute" to American Indians, and "Smoke Signals" director Chris Eyre, an American Indian, has said, "I completely respect Johnny Depp for making this movie happen and for him to try and rewrite Tonto for a new generation." Some critics, including Salon's Andrew O'Hehir, have found bright spots in the film even while acknowledging the problems inherent in its casting. Depp has screened the film for the Comanche nation -- with many leaders of various tribes in attendance -- and Disney donated proceeds from the Los Angeles premiere to the American Indian College Fund.

But for all the trappings of enlightened cooperation, the new Tonto may read as more of the same -- and less a salute than an insult.

Tonto, the loyal sidekick of the Lone Ranger (played in the 2013 film by Armie Hammer), has evolved a great deal even prior to the current incarnation. "He may be the most pervasive American Indian character of the 20th century," said Chadwick Allen, the coordinator for the American Indian studies program at Ohio State University and the author of a forthcoming book about Tonto. "And he's purely fictional, unlike Pocahontas, Sacajawea, Crazy Horse, Sitting Bull or Geronimo. It's not surprising he keeps getting recycled. He's perfectly malleable for whatever the dominant fantasies are for native culture."

Those fantasies have included, said Allen, an "older, diminutive in stature, explicitly half-breed" version of Tonto, one who perpetually needed saving and didn't have his own horse, in the early "Lone Ranger" radio serials (on which Tonto was played by a white man). He was portrayed as bloodthirsty rather than concerned with justice, dovetailing with what Allen called "the savage stereotypes of the Indian."

But in 1936, as the Lone Ranger empire continued to blossom, "Tonto becomes full-blooded, taller, more robust, and around the same age as the Lone Ranger" -- coinciding with the implementation of the Indian Reorganization Act, a law that allowed some self-government to American Indians along strictly proscribed lines that resembled American government. When Americans needed Tonto to be a bumbling incompetent or a bloodthirsty savage, he could do that; after the Reorganization Act, effectively intended to help "Americanize" the tribes, he became slightly less than equal in the quest for justice. Harvey Markowitz, the co-author of "Seeing Red: Hollywood's Pixeled Skins" and an assistant professor of sociology at Washington and Lee University, described the Tonto character as "justification for treating [American Indians] as children, putting them on reservations, and training them to be white people as you take away their land."

The best-known iteration of Tonto remains the one played by Jay Silverheels in "The Lone Ranger" TV series, which ran from 1949 to 1957, a time during which "Indian termination policy" saw Indians forcibly "integrated" into society and reservations' special status revoked. Allen described the TV Tonto as "skilled and robust and detached from any native loyalty." It was Silverheels who popularized a certain halting pidgin-speak and the term "Kemosabe," as well as a renewed loyalty to the Lone Ranger that felt like a white ruling class reassuring itself.

But it was his halting speech that made Tonto such a memorable character -- a halting speech pattern that would seem to be only slightly dialed down in the trailer, in which Depp says, "A vision told me, great warrior would help me on my quest" and "You find treasure, you find the man who killed your brother." In both clauses, a definite article has been sucked into the vacuum produced by an ethnic stereotype. Silverheels' Tonto "didn't have power to articulate his point of view in a way that had any eloquence with the viewing public," said Joanna Hearne, a professor of English at the University of Missouri and the author of "Native Recognition: Indigenous Cinema and the Western." "It didn't reflect the eloquence of indigenous people  and it certainly didn't reflect the knowledge embedded in the language systems of indigenous people."

As for Silverheels himself, said Hearne: "He was typecast, but he did use his power to work behind the scenes for Indian actors in Hollywood. [...] He helped them with their professional careers, he helped them get on-screen. He helped politicize that work in a productive way." Depp, for all that he has been adopted by the Comanche tribe (after saying that Indians "have to think, somewhere along the line, I’m the product of some horrific rape. You just have that little sliver in your chemical makeup”), is in fact undoing Silverheels' advocacy by taking a role away from an Indian actor by playing Tonto.

"In some ways, [the so-called practice of 'redface'] has become less common," said Hearne, "but Native actors aren't always hired for lead roles. Think about the werewolves in 'Twilight.' Most of the actors playing the wolf pack have Native ancestry. But the lead actor doesn't."

And stereotypical portrayals of American Indians are still very much with us: "Look at the products on the shelf at the grocery store," said LeAnne Howe, a professor of American Indian studies at the University of Illinois and Markowitz's co-author. "Or the Jeep Cherokee. The Pontiac. Land O'Lakes butter. The Native American cigarettes [American Spirits]." The white idea of that which is Indian -- leaving aside the vast number of differences between tribes, American Indians are generally seen as exotic, stoic, "connected with the land" -- is among the most easily monetized tropes for anyone seeking the patina of American-ness. The Disney corporation is surely hoping Americans will spend their Independence Day holidays indulging the exoticism of Tonto.

"Other stereotypes, whether Asian, African-American, Mexican-American -- have become muted," said Howe. I don't think that's the case with American Indians because we are fewer in numbers. People excuse it as saying they're honoring us by having representations of Native Americans on butter."

For some, perceptions of Tonto have changed with time. Howe initially found Tonto sympathetic: "I grew up in the '50s. I grew up watching Tonto on television. Jay Silverheels for me was heroic. He was the only American Indian I would ever see on television, ever. I look at that today with different eyes."

"It demeans and makes invisible modern American Indians today," continued Howe. "No one can take us seriously unless we have some crazy headdress on."

Every generation gets the Tonto it deserves, perhaps, and only the weekend box-office returns will tell if this one, as played by Depp, catches the imagination of the American public. But for an entertainment culture that evidently seems more concerned with rehashing old stories of itself than in telling a new story in which an American Indian has some agency beyond helping the white man's quest, Johnny Depp's the perfect actor; "American Indian" is just another costume he can throw on.