Tea Party darling hurt himself by showing decency on immigration, now will remake himself as anti-abortion warrior 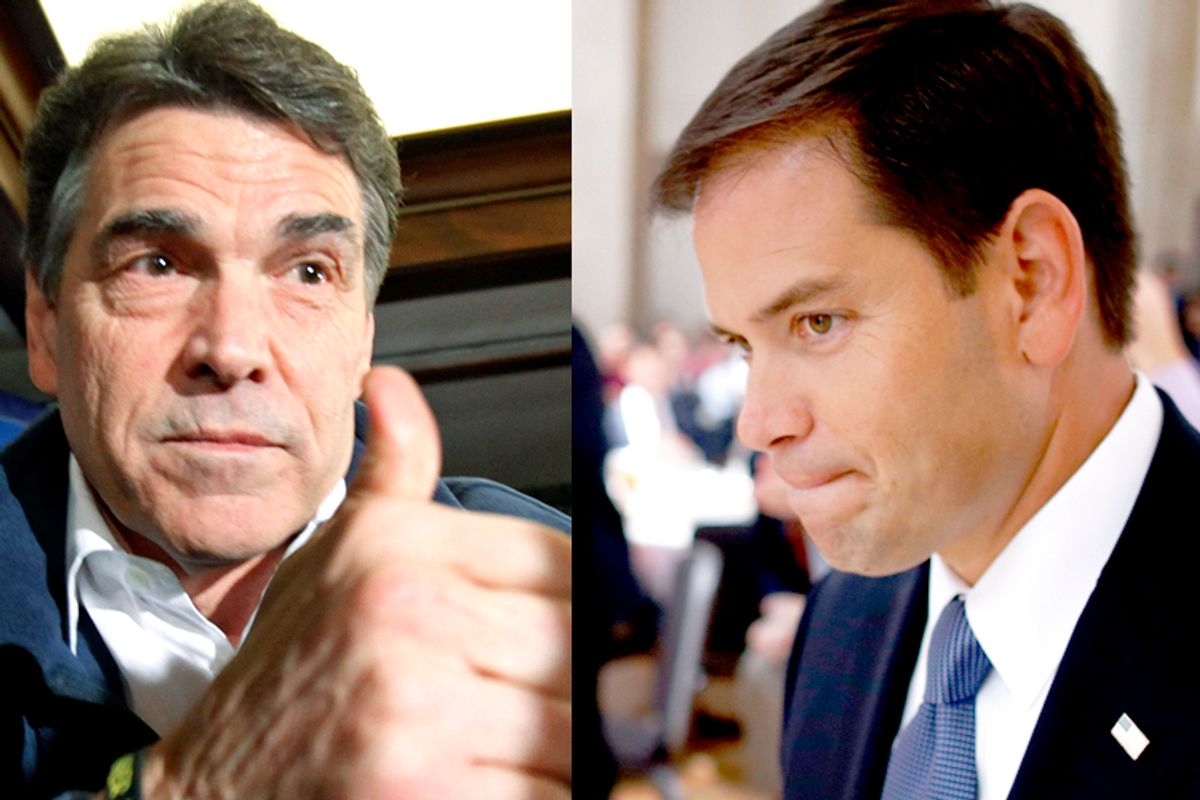 Poor Marco Rubio. His role in developing a Senate immigration reform bill has hurt him with the Tea Party – but it doesn’t seem to be doing much to help him with Latinos. A poll by Latino Decisions released Tuesday found that in a 2016 presidential run, Rubio would lose badly among Latinos to both Hillary Clinton (66 to 28 percent) and Vice President Joe Biden (60 to 28 percent). The two Democrats are also viewed far more favorably than is Rubio by Latino voters, though Rubio is their top choice among the likely 2016 GOP contenders.

I should note that Rubio’s membership in the "Gang of Eight" will likely help him with one powerful GOP constituency: big business. But the toll it has taken on the right, without providing gains among Latinos, could be deadly to his national ambitions. Ann Coulter has called Rubio “the Dr. Kevorkian of the Republican Party,” while Glenn Beck says he’s “a piece of garbage,” and at a Tea Party anti-immigration rally last month, people carried signs calling him “Obama’s idiot.”

So now Rubio is making a bold move to win back some of his far-right base: He’s going to be the primary sponsor of a Senate bill imposing a 20-week abortion ban, to match the one pushed through by his Tea Party buddy Trent Franks in the House. No matter that it can’t pass the Democratic controlled Senate, and President Obama says he would veto it if it should ever reach his desk; no matter that it’s also unconstitutional. Rubio can see how being an antiabortion crusader revived the political standing of once-shamed Texas Gov. Rick Perry, and he’s going to try it himself.

Of course, Perry’s national problems were a little bit different, mainly due to having shamed himself on the big stage during the 2012 GOP primary. Rubio had his own time in the spotlight of shame – that Big Gulp moment during his rebuttal to Obama’s State of the Union speech in January – but it probably can’t compare to Perry’s “oops, my bad” after completely forgetting one of the three federal agencies he was going to abolish, during a debate in November 2011. But the two men have something else in common: Perry, like Rubio, hurt himself with the GOP base by being comparatively decent on immigration reform, defending a Texas version of the DREAM act, as Mitt Romney and his other rivals demagogued the issue and backed “self-deportation.”

Yet Perry has seen his standing climb with Texas conservatives, at least, since he began not merely to champion but to aggressively push through some of the toughest restrictions on abortion in the country – even calling two unusual special sessions to get it done, after the package didn’t get through the Legislature by normal means. In January of this year, a PPP poll found that only 31 percent of Texas voters wanted Perry to run for reelection in 2014 – and that included only 41 percent of GOP primary voters, versus 47 percent who wanted to see another GOP candidate run.

Six months later, Perry is still unpopular overall in Texas, but the latest PPP poll found that he had upped his standing with GOP voters -- in January 68 percent of GOP voters approved of the job Perry was doing, but that's up to 81 percent now. And that’s how he increased his lead over state Sen. Wendy Davis in the latest poll, even though her name recognition and popularity in the state has increased dramatically since she became Davis’ primary foil on the abortion issue.

So Rubio is hoping that becoming the champion of the 20-week abortion ban will have a similar effect on his standing with the national GOP base. In breaking the news about Rubio’s decision to sponsor the bill, the Weekly Standard’s Fred Barnes explained:

He is viewed as a likely candidate for the Republican presidential nomination in 2016. But he's recently prompted serious criticism by Republicans over his support for the immigration reform bill that passed the Senate last week. His front-and-center role on a key anti-abortion measure is likely to ease concerns about him among GOP voters.

Clearly Rubio believes he’s got to run away from the pro-reform Gang of Eight and toward the antiabortion Gang of Crazy. It will be interesting to see if both Perry and Rubio wind up running for the 2016 GOP nomination. What hurt Perry most in 2012 wasn’t his bumbling on the campaign trail, but his apostasy on immigration. You’d have two guys who’d wounded themselves trying not to be insane when it comes to immigration, vying to make it up to the base by being the most aggressive antiabortion candidate (although I’m sure they’ll have competition on that score). It would make for some great debates. It's likely the primary campaign will have at least a couple of contenders who are thinking about winning back Latino voters, but none so far that are doing the same with women.