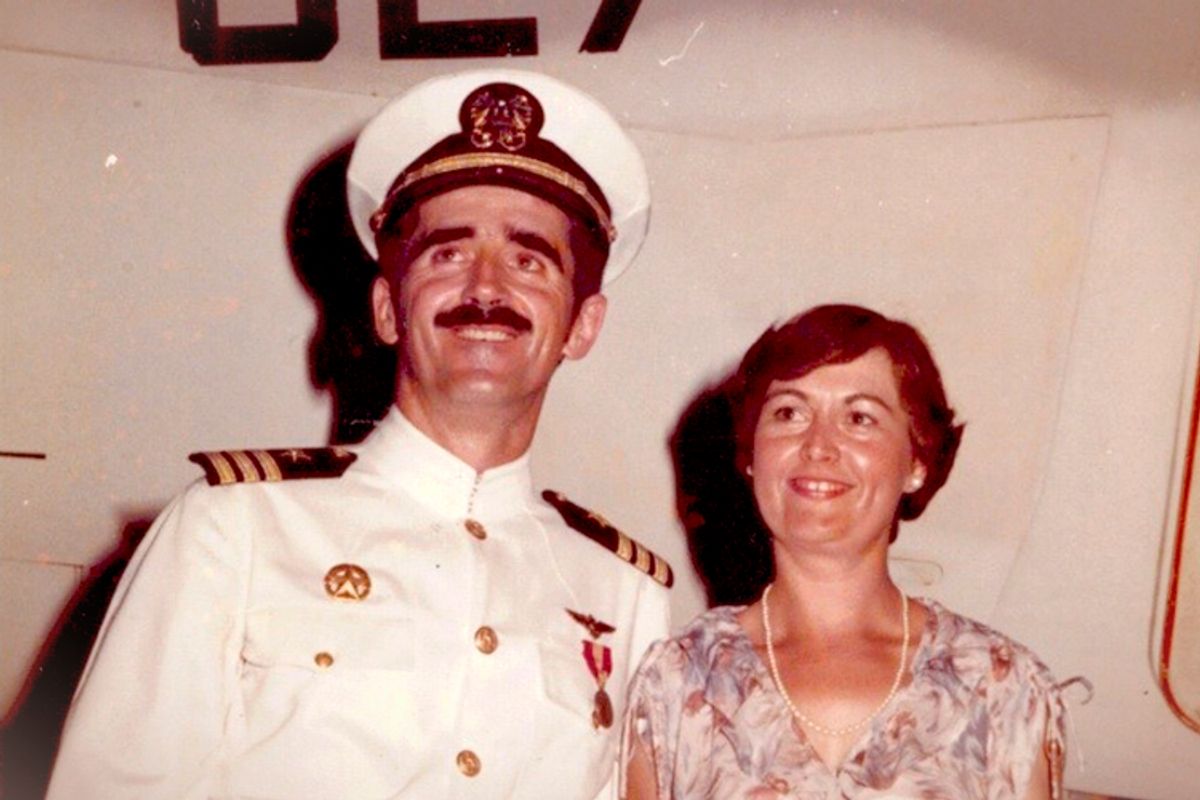 On the Fourth of July 1979, my father, Cmdr. Peter Rodrick, assumed command of his own squadron, VAQ-135, the Black Ravens. At 36, he was one of the youngest skippers in the Navy and on the fast track, maybe all the way to admiral. He had one of the Navy’s glamour jobs: flying EA-6B Prowlers, a radar-jamming jet, off carriers and landing them on a floating speck of America off the coasts of Singapore, Sicily and other Shangri-Las.

The change-of-command ceremony took place at Cubi Point in the Philippines, and my mom flew out for the ceremony. There are pictures of the two of them together, young and beautiful and beaming at the ceremony. Mom's in a sundress, Dad in his dress whites.

A few days later, Dad asked Mom if she could stay a few extra days, but she had my two sisters and me back in the States. “I don’t see how I can do it,” she told him. Dad understood; he had been gone 1,100 days of the past six years; he knew how to say goodbye. So he kissed her and headed back to the USS Kitty Hawk. My mother was hysterical. Years later, she told me why.

"I watched him walk away through a window and I just knew that I wouldn’t see him again.”

Mom was right. Dad’s cruise was almost over when the hostages were taken in Iran in November 1979. As a show of force, President Carter sent the Kitty Hawk toward the Persian Gulf. While in transit, my father was killed in a plane crash off the Kitty Hawk, near Diego Garcia in the Indian Ocean on Nov. 28, 1979.

Since then, my family has had a somewhat tortured relationship with Independence Day. Partially, it represents the anniversary of my dad's greatest accomplishment, and the holiday stands for everything he believed was right and true about America. But on the darkest side, July 4 stands in as the holiday we most identify with his death and the shockwaves it caused as he -- and we -- paid the ultimate price for American freedom.

To help me understand my dad’s life better, I spent two years following his old squadron, VAQ-135. I started with the change-of-command ceremony of Cmdr. James "Tupper" Ware on July 2, 2009, at NAS Whidbey Island where we were stationed when my father was killed. Tupper was the American man as hero: He rode a Harley, flew combat missions over Iraq and Afghanistan, but on this day – the supposed pinnacle of his career -- taking command was breaking his heart. He said so in his speech.

“We have sacrificed much in the nation’s defense, and we will sacrifice much more in the years ahead. Some of us will lose loved ones, some will lose relationships, and some will miss the birth of our children.”

He looked down at his wife holding hands with his girls, Brenna and Caitlin.

“Others, such as myself, will return home to children very different than the ones we left. We accept these trials with open hearts and also with the determination that these sacrifices not be made in vain.”

He was right. Ware returned the following March with a Bronze Star and an impressive squadron sortie completion rate, but he’d missed something precious: His girls were now young women. He was also sick as a dog, the victim of a virus that swept through the USS Nimitz as it approached U.S. waters. The day after he returned home, he sped over to hear Caitlin’s piano recital, falling asleep as she played “Edelweiss.”

That night, he and Beth had just gone to sleep when Caitlin barfed in her bed. Tupper had been home a little more than a day and he’d already given his youngest the flu.  That night, they took turns in the bathroom. He’d throw up and then she’d throw up. Tupper told her he was so sorry that he had made her sick. But Caitlin didn’t mind. She brushed a stray hair off her face, gave him a weak smile, and held his hand.

“That’s OK, Daddy. I’d rather be sick with you here than be better without you.”

The next summer, I spent the Fourth of July with the Wares up in Anacortes, not far from where I learned about my father’s crash. It was typical chilly Northwest weather; all of us huddled under blankets as we watched from a field as the bombs burst into air, the rockets' red glare. I watched Tupper snuggle with Beth and his girls, a giant smile on his face. And I thought of my mother and father beaming in a picture on another island decades and thousands of miles away.

For better or worse, I never felt more American.

Stephen Rodrick is the author of "The Magical Stranger: A Son's Journey Into His Father's Life." He is a contributing writer for The New York Times Magazine and a contributing editor for Men's Journal. He has also written for New York, Rolling Stone, GQ, and The New Republic.