An Independence Day-themed right-wing fever dream: The president wants to deprive our troops of fireworks 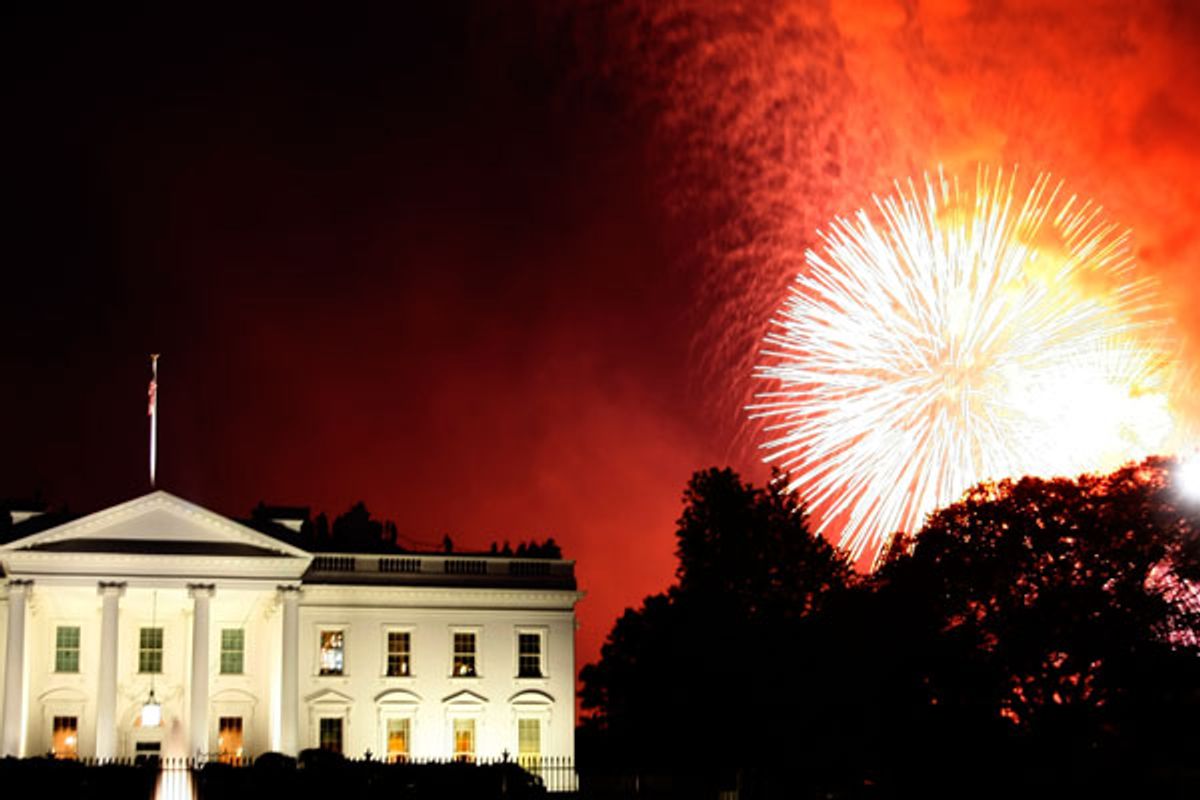 It's been almost ten years since Barack Obama first exploded onto the national stage in a keynote speech at the Democratic National Convention in 2004, but after three elections, two years in the Senate and five years in the White House, some people are still not convinced that the president of the United States is "pro-America" enough. At least that's what the latest mini-controversy lighting up conservative blogs and Fox News suggests.

"Obama Spends $100M on African Trip But Cancels Marines' July 4th Fireworks," the headline on FoxNation read. "Shocking! While Obama Funds Syrian Rebels, Military Bases Must Cut Fireworks Celebrations," another read. "Those funds would have covered every federal Fourth of July event nationwide with plenty left over for a president’s vacation [in Africa]," wrote Brent Bozell, whom allies call “a beloved and critically important player in American history." Fox gave the controversy airtime twice this week, also contrasting it with the spending on the presidential trip to Africa.

The implication is clear: Obama doesn't really love America, or else he wouldn't be insulting our troops by depriving them of fireworks on the Fourth of July, of all days, and taking the money go to spend it in Africa or the Middle East. It hits all the right buttons for an Obamaphone-esque right-wing mini-scandal, and just in time for the holiday weekend.

What's really going on here? Sequestration. Remember the package of budget cuts that the White House warned would lead to the sky falling while Republicans shrugged? The AP reports that because of cuts to the military's budget in sequestration, a handful of military base commanders are deciding to forgo their annual Independence Day festivities, which can cost up to $100,000, in order to devote their diminished resources to other arguably more important things like keeping people employed. It's unfortunate and unjust for American service members affected, but Brig. Gen. Thomas Gorry, the commander of the Marine's Camp LeJune in North Carolina, told the AP that it was necessary to "ensure that we can mitigate the fiscal challenges we are currently facing." And it was Obama who repeatedly pressed to undo the sequester.

And the notion that Obama, while on a trip to Africa, reached down into the budget of individual military bases to cut single line items is absurd. If he were to do that, you'd think he'd cut the fireworks budget across the board or in places controlled by his political enemies, not in his home state of Hawaii.

As for the $100 billion spent on Africa. First, the number is $60-$100 million, and even then unconfirmed. Second, anyone can play this game. Why do hedge fund managers and oil companies get tax breaks that let them deprive the government of money that could go to fireworks? Or why are taxpayers footing the bill for George W. Bush's presidential library instead of giving our troops a good fireworks show? Or spending $5 million a year on abstinence-only sex education, which we know does not work, instead of on fireworks?

And if they really cared, instead of worry about, maybe do something nice to the troops on July Fourth.