I love July 4. But what is “independence,” if full freedom still doesn't exist for everyone in this country? 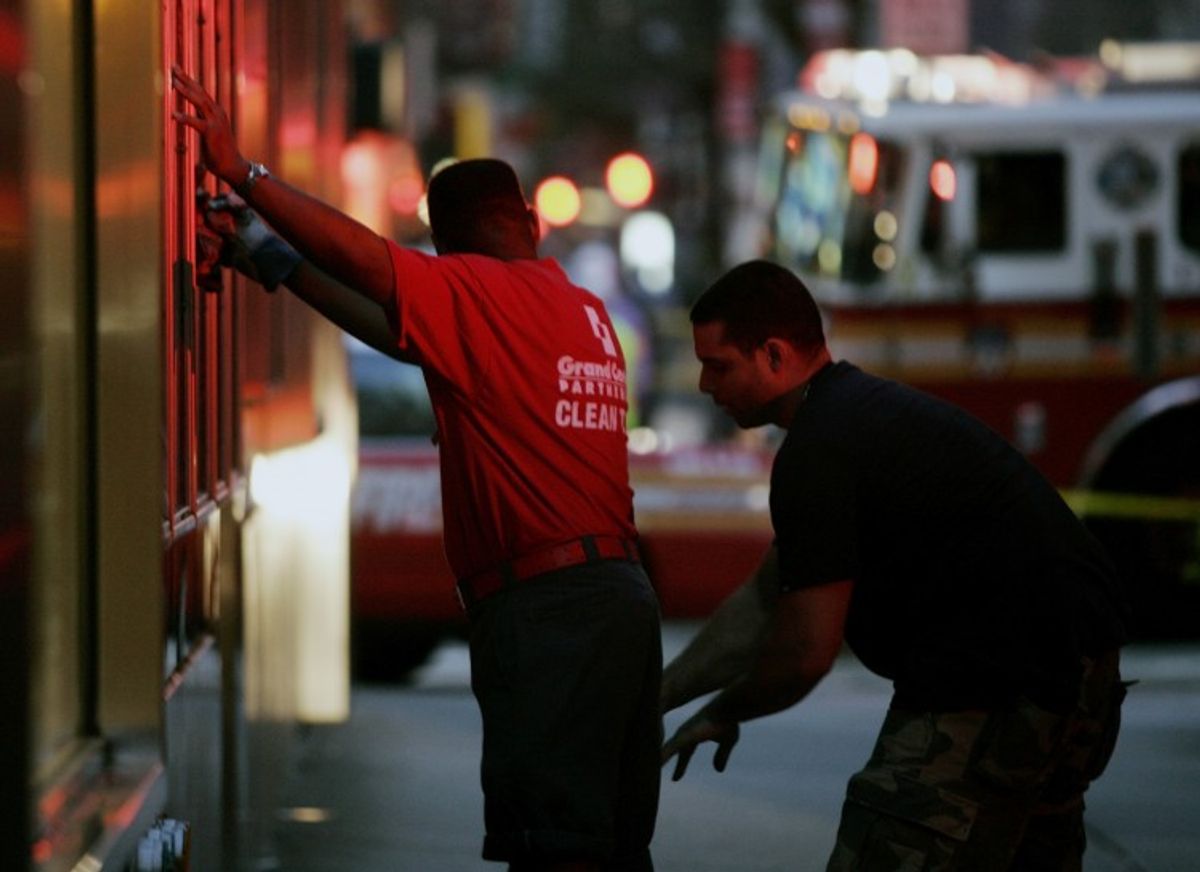 An unidentified man is stopped by undercover police officers on Third Avenue between 41st and 42nd Street in New York. (Reuters)
--

Comedian Chris Rock sparked a debate a year ago today, when he tweeted: "Happy white people's independence day! The slaves weren't free but I'm sure they enjoyed fireworks." The sentiment expressed in Rock's comments reflect the profundity of racial inequalities by challenging Americans to remember the stark realities of the past.

Recently, liberals and conservatives alike were outraged by the revelation that the National Security Agency, under the auspices of the Patriot Act, were collecting phone records and data on millions of citizens. The thought of the government recording their intimate calls outraged their sensibilities and sparked a national debate. Likewise, following an outcry from angry travelers, changes have been introduced to curb post-9/11 Transportation Security Administration practices that allow airport security to aggressively search, screen and frisk flight passengers.

This is what one may call "white people problems."

For, you see, young black boys and black men in the Bronx and Brooklyn are stopped and frisked by police while walking to McDonald's. They are criminalized and stigmatized -- seen as suspicious and treated without respect. This culture is so deeply embedded that both police and citizens alike regard Skittles as a deadly weapon when held in a black boy's hand.

Last week, Mayor Michael Bloomberg displayed an egregious case of cognitive dissonance when he claimed that the problem with the NYPD's controversial "stop-and-frisk" policy (SQF) wasn't that it racially profiled African-Americans and Latinos, but rather that far too many whites were subject to stops.

"I think we disproportionately stop whites too much and minorities too little," he said.

You read that correctly: The white, male, billionaire Mike Bloomberg thinks that "whites" are being harassed by police at alarming rates.

The mayor's comments come just after the City Council passed two laws limiting the NYPD practice. A federal case, Floyd v. City of New York, is currently pending and may abolish the program altogether. The case was brought on behalf of black and Latino residents and their children -- some as young as 12 and 13 -- who were harassed and, at times, unlawfully arrested. Bloomberg's staunch defense of the misguided practice raises the question posed by Salon's Joan Walsh: "What's the matter with white people?"

The former Republican, self-proclaimed independent parades as an open-minded liberal. He champions gun control and has used his wealth and political capital to support gay marriage and healthy eating for American youth. But Mike Bloomberg has one unbelievably blaring blind spot: racism.

Let me be clear, Bloomberg is not a Ku Klux Klan member. He may not harbor ill will or intentional dislike for racial minorities, and blacks in particular. But he's a racist nonetheless. His actions, attitude and statements reflect the essence of what sociologist Eduardo Bonilla-Silva termed "colorblind racism." In his book "Racism Without Racists: Colorblind Racism and the Persistence of Racial Inequality in the United States," Bonilla-Silva explains that the "post-racial" form of racism is one that disavows individual racism, yet serves to perpetuate a hierarchy of white privilege in our society.

In the Age of Obama, each has become more prevalent in America's sociopolitical debates.

"Abstract liberalism" reflects the libertarian philosophy that social policy should not be engineered to achieve equal outcomes. "Naturalization" follows by allowing whites to justify inequitable outcomes as being the result of natural occurrences. "Cultural racism" uses loosely based facts and social phenomena to dismiss racial disparities. (e.g., "Mexicans do not put much emphasis on education" or "Blacks have too many babies"). "Minimization of racism" suggests discrimination is no longer a major problem by emphasizing the progress made. (The minimization theory can most recently be seen in the Supreme Court's 5-4 decision invalidating Section 4 of the Voting Rights Act, in which Chief Justice Roberts admitted that though racism still exists in the South, the very safeguards that achieved progress were no longer necessary.)

Mike Bloomberg is an equal opportunity offender, displaying characteristics of each frame. His attempt to justify stop-and-frisks of racial minorities is largely based on statistics showing higher arrest rates among the very minority communities that he and Police Commissioner Ray Kelly have deliberately targeted through "over-policing." Essentially, he stops, frisks and polices blacks and Latinos and then says that only blacks and Latinos commit crime.

Statistics show that 87 percent of all NYPD stop-and frisks are of minorities -- despite blacks and Hispanics making up only 23 percent and 29 percent of the city's population, respectively. The recorded number of black males stopped in 2011 exceeded the number of black males who actually live in the city. Over 90 percent of minorities stopped were innocent of crime and had no weapon. Yet the mayor incessantly defends racial profiling. And of the few whites who were stopped, white males were twice as likely to be carrying a gun -- the very reason Bloomberg claims he supports the program. So based on Bloomberg's own analysis, he should be targeting whites.

But the mayor isn't alone in his myopic views. It seems America's sociopolitical consciousness is plagued by a three-fifths compromise that only applies to black and brown people -- as if civil liberties are color-coded.

What, therefore, is "independence" if freedom only exists for white males like those who first signed the Declaration of Independence? While we purport to be celebrating liberty today, Bloomberg's colorblind racism is only a symptom of an endemic national disease.