A middle ground between hospital and home birth could save Americans lots of money. And yes, it's safe 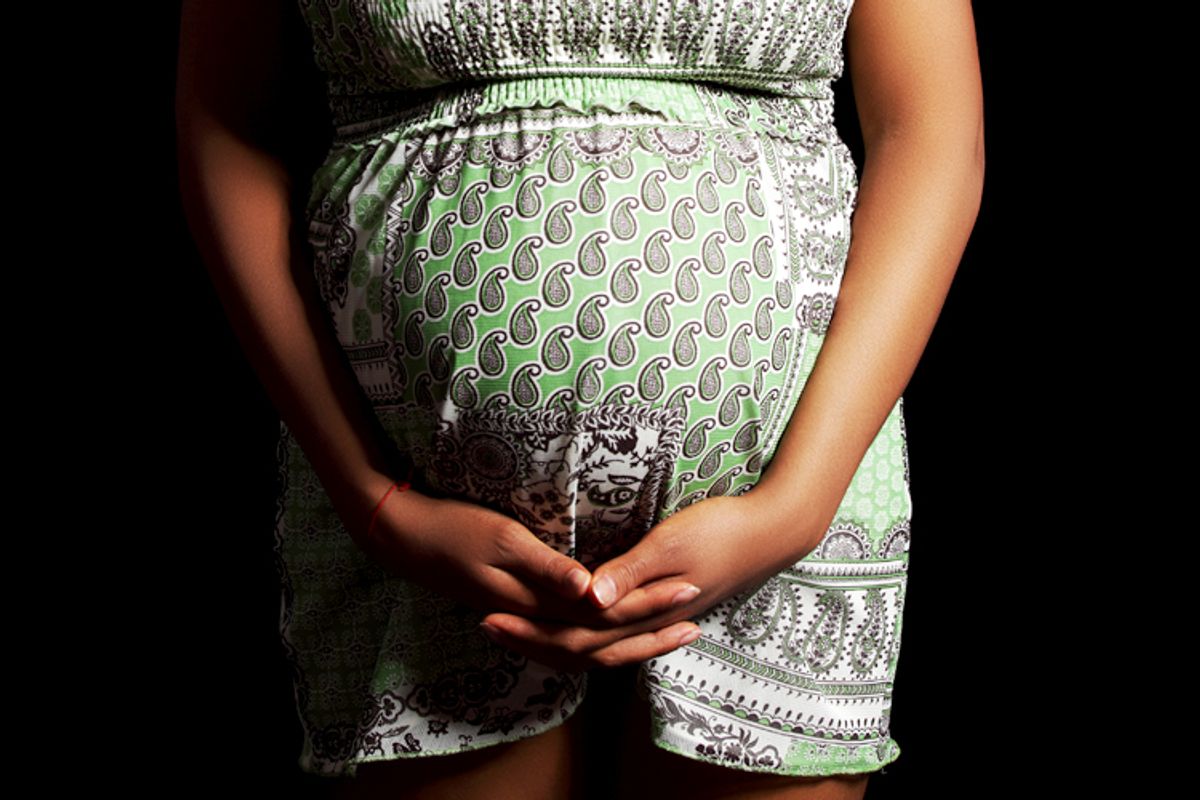 Almost two years ago, pregnant with my daughter, I paid my first visit to the Cambridge Birth Center. Located inside an old Victorian house, the facility is hard to distinguish from a modestly appointed home, with blond wood floors and three spacious bedrooms, each attached to a bathroom with a large tub. If the interior is comforting, so is the view: the Cambridge Hospital, part of the same campus, is visible through most windows. Should you need to get there in a hurry, the trip would take about ten seconds.

Like most of my fellow patients, I chose the birth center because I wanted to avoid the high-tech approach typical of hospitals, but I didn’t feel entirely at ease with the idea of a home birth. The birth center hit the sweet spot. I loved the cozy environment designed expressly with birth in mind. I adored my unflappable midwife, Heidi, a genius at deflating anxieties. And when in labor, I benefited from the warmth and expertise of the midwife on call, Connie, who calmly coached me through delivery.

But I didn’t realize until later that there were other reasons to love birth centers—namely, hard economics. In light of this week’s big Times article on the staggering costs of maternity care in the United States, it’s time that birth centers receive the recognition they deserve as a viable alternative. A recent major study confirmed that for low-risk pregnancies, birth centers provide equally safe care for much lower costs than hospitals. Even the Affordable Care Act acknowledges their value; a little-noticed provision of the law mandates that Medicaid cover birth center services. Yet, thanks to a combination of unfriendly laws in some states, insurer resistance, and lack of public awareness, far too few American women have access to this form of excellent, cost-effective maternity care.

First, to clarify the terminology: a free-standing birth center is a homelike, midwife-led facility that offers prenatal care and delivery services and has emergency arrangements with a hospital. It can be located inside a hospital, but it must be separate from the acute obstetric care unit. (Some hospitals use the term “birth center” to describe conventional units, which has caused confusion.) Distance from the hospital varies. I must admit I would have felt much less comfortable with a more remote hospital. But in some rural areas, women live hours away from the nearest one, and it may be preferable to have a facility closer to their homes than to the hospital. All birth centers monitor patients throughout pregnancy to ensure that they are low-risk; if not, they are referred to hospitals.

According to the American Association of Birth Centers, the facilities operate according to the “wellness model” of pregnancy and birth, as opposed to the medical model that sometimes seems to treat these events like illnesses. As AABC executive director Kate Bauer told me, “In a hospital, all women are treated as if they are high-risk. In a birth center, every woman is seen as low-risk, unless her risk level is elevated…It’s appropriate use of resources.” You can't get an epidural at a birth center. They rely on low-tech pain-management techniques such as warm baths and changing position, though some do offer conservative doses of Demerol and nitrous oxide.

That birth centers offer safe, economical care is not news. A landmark 1989 New England Journal of Medicine study reviewed records of 11,814 women at 84 birth centers and found that there were no maternal deaths, while the neonatal mortality rate was similar to that of low-risk hospital births. The rate of cesarean sections (which involved transfers to hospitals) was 4.4 percent. The article concluded, “Few innovations in health service promise lower cost, greater availability, and a high degree of satisfaction with a comparable degree of safety. The results of this study suggest that modern birth centers can identify women who are at low risk of obstetrical complications and can care for them in a way that provides these benefits.” (The authors emphasized that all of the birth centers in the study were accredited; the safety of unaccredited centers is uncertain.)

A new study published in January in the Journal of Midwifery & Women’s Health ratified those results. Because safety is such a concern, allow me to dwell again on the numbers. This study reviewed the records of 15,574 women at 79 birth centers from 2007 to 2010. Again there were no maternal deaths, and again the neonatal mortality was comparable to low-risk births in hospitals. Just 6 percent of the women ended up having cesareans at affiliated hospitals, compared with about 25 percent of low-risk women who started out at hospitals. (The total nationwide rate of cesareans in 2010 was 32.8 percent.) The study estimated that given the lower cost of the facilities, and the much less frequent interventions, these birth-center deliveries saved approximately $30 million.

Despite these positive outcomes, only a tiny minority of women (.3 percent in 2010, according to the CDC) give birth in such centers. The AABC estimates that if just 10 percent of the 4 million women who give birth annually did so in birth centers, the savings would come to at least $2.6 billion. The provision in the Affordable Care Act—stipulating that Medicaid programs reimburse birth centers—was included because it was projected to save money.

By some indications, trends are favoring birth centers. According to the AABC, their numbers have grown from 170 in 2004 to 251 today. Forty-one states license birth centers, the American Public Health Association has issued guidelines for licensure, an entity called the Commission for the Accreditation of Birth Centers does what its name suggests, and the AABC also has standards for members. All of this constitutes what the recent journal article calls an “infrastructure of standards, accreditation, and licensure” that contributes to the safety and reliability of accredited centers.

Historically, tensions have simmered between the midwife community and ob-gyns, but even the American College of Obstetricians and Gynecologists has endorsed birth centers—albeit in a somewhat roundabout manner. In a 2008 statement reiterating their strong opposition to home births, ACOG asserted that delivery “in a hospital or accredited birthing center is essential” (emphasis mine).

Birth center advocates were also thrilled by the Medicaid provision in the health care reform law, sponsored by Senator Barbara Boxer: not only should it mean expanded birth center coverage for low-income women, but private insurance often takes its cues from the federal programs, so a ripple effect is conceivable. Now, despite the potential savings, private insurance often resists covering birth centers. (I was fortunate on this front: my total out-of-pocket expenditure was a $15 co-payment for my first prenatal appointment.)

But amid this progress, serious gaps remain. Nine states do not license birth centers, and the Medicaid provision applies only to those who do. The AABC claims, too, that some states have not properly implemented this part of the law. State laws vary widely, with some much more hospitable to birth centers than others. These differences don’t always break down according to familiar patterns: In Texas, for instance, birth centers flourish, while Maine does not license them.

As a result, many women who would prefer birth centers don’t have the option—and many of these end up having c-sections and other interventions in hospitals. I blame not greed or evil but the so-called law of the instrument: the tendency to rely on the tools you have. The debate about childbirth is particularly polarized—with some convinced that pregnancy should not be treated as a medical condition—but not unique. Take mental health. If you suffer from anxiety and you go to a psychiatrist, you will likely leave with a prescription in hand. Some people know they want Zoloft, but others would like to try a less medical approach first.

A final obstacle for birth centers in reaching their full potential is cultural. The majority of women seem to think that birth centers are a risky option for a hippie fringe, one step removed from giving birth in a field under a full moon, orgasmically. Granted, birth centers will never be right for everyone. I know women who don’t see the point of trying to give birth without an epidural. (As writer Anne Lamott memorably put it: “I have girlfriends who had their babies through natural childbirth—no drugs, no spinal, no nothing—and they secretly think they had a more honest birth experience, but I think the epidural is right up there with the most important breakthroughs in the West, like the Salk polio vaccine and salad bars in supermarkets.”) Then there are women who wouldn’t consider leaving the privacy and comfort of their own home to have a baby. But there’s a good-sized contingent that wants to try for a low-tech birth in a relaxed setting that’s been proven safe. Birth centers are more likely to provide this experience than hospitals are. They should be seen not as sites for New-Age-y, hazardous adventures, but as places that offer mainstream, high-quality maternity care.

One last advantage of birth centers: the parties. The Cambridge Birth Center has thrown two afternoon shindigs for families since my daughter was born last July. She got to meet the midwife who listened to her heartbeat in utero, and the one who delivered her, as well as other kids who were born there. And I got to return again to the place I’d visited so frequently, this time eating chips and salsa.