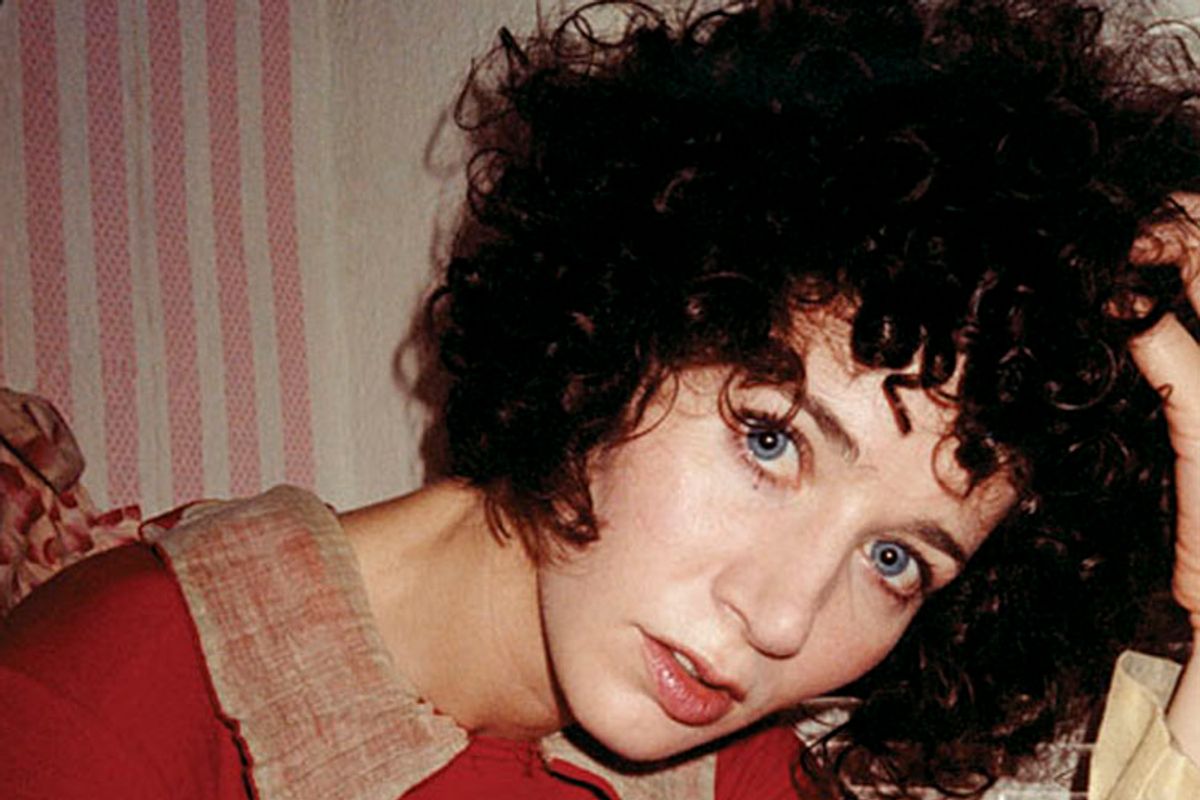 Miranda July has already made waves beyond the art-film crowd with her new project, "We Think Alone" -- and it's only just begun.

The filmmaker behind "Me and You and Everyone We Know" and "The Future" recruited a circle of collaborators, many of them celebrities, to forward her their personal emails around 20 themes. The first one, provocatively, was "Money" -- and "Girls" star Lena Dunham's email deciding against a $24,000 custom sofa made waves (including on this site). Other emails were more prosaic -- actress Kirsten Dunst telling someone that she'd be selling her car to a friend, NBA great Kareem Abdul-Jabbar talking about a children's novel he wrote -- and still others are deeply raw. Sheila Heti, the author of "How Should a Person Be?," confesses that she only has $1,000 to her name and ponders self-publishing her work.

This is only the latest provocation by July, whose work tends to attract passionate defenders and detractors both. The director and artist has made a pattern of probing into the corners of life -- recently publishing "It Chooses You," a book of interviews conducted with individuals she met through PennySaver classified ads. And yet she confesses that she thought little about the repercussions of the work for stars like Dunst and Dunham, whose outsize public profiles necessarily color our understanding of their emails; Dunst's blithe unawareness of a good price for her car rhymes with her lackadaisical on-screen persona in Sofia Coppola films, while Dunham's flirting with dropping five figures on a piece of furniture only gives ammunition to those who malign her as a child of extreme privilege.

For July, the chance to use celebrities was merely an opportunity to get her project discussed (and, yes, covered by the media). She spoke to Salon about the way her art has been changed by collaborating for the first time with stars, what sort of emails most interest her, and whether anything ought to be off-limits.

How did you select the themes for each round?

First it was just a brainstorm -- most of them are the first things I thought of in one minute. And then I kind of looked at it and tried to make a balance of things that would elicit more emotional response, as well as things that would elicit things that are clerical or mundane. It is this medium where we go to the heights of drama and also write one-word emails. I tried to encompass all that. I don't want to give [future themes] away but I was excited by the fact that email is a multimedia medium. It's frustrating when you do a book -- it's like, what do you do with the videos? Do you print them somehow? With this, everything's in its native form.

Do your participants find ways to frame themselves in a flattering manner with the emails they choose?

A lot of them do. With some people, they always manage to find a way to make it completely mundane! Or private, that is. A lot of them are literally about numbers or transactions and then Sheila Heti's is like, How do you make a living as a writer?

How did you select participants? I was struck at the degree to which many participants are not just known in their fields but really famous.

I mean, I'm this person who's been encouraged to work with celebrities many times in my life -- making two feature films -- and somehow it never seemed quite right. But that was an important aspect of this project. I did, at first, think it'd be regular people, like I usually do. But the project is less meaningful without the mass audience looking at it. That's what led me to celebrity, and celebrity's so weird that I wanted to have these different kinds of celebrity. What a celeb is in the literary world versus who the tabloids are picking up on.

There's two people in this project [Dunham and Dunst] who have this one kind of celebrity! They may not be the people that most of the audience is focused on, though. There's a literary audience drawn to the project. I enjoyed thinking about celebrity and trying to edit the textures of it. Kareem Abdul-Jabbar -- I'm not the kind of person who made him a celebrity. I had to get clear on who he was; I had to read his Wikipedia. I don't know anything about sports. Obviously, I know his name and saw him in movies -- but it turns out he's huge.

Has any one of your participants expressed regret over revealing their email?

Well ... no, actually. Although understand: You're talking to me at week one of this long project. I think we're all processing how it's playing out. I assume that Lena and Kirsten thought about this? I didn't, really. Not in a big sense, because [fame is] not part of my reality.

Is there any evidence you have that they did or did not think it through?

For one thing, they went about it very differently and have different privacy comfort levels. They are taking care of themselves. After Lena forwarded a bunch of emails, I said, "Really? Are you sure?"

We were talking about what names she should delete. She didn't care about names. A lot of them were OK to share. She said there are no real secrets here. That reassured me. She's not sharing any real secrets.

There's one thing Sheila Heti said: the tricky thing about it is you don't know what you're revealing about yourself until it's revealed. I hope it doesn't become an endurance test for the participants! So far everyone's been really pretty pleasant! No one's reacting with horror.

Do you worry that your participants are gaming the system -- that letting them choose what emails they publish make it an opportunity for them to frame themselves sympathetically and burnish their fame?

I didn't think about it too much -- I would read all of [a single participant's emails] in a row. No one will read all of Catherine Opie's emails like I did. When you do that, you get a really strong sense of the self-portrait and the choices made. It's subtle, there's a few little things that play out that I've noticed. That I don't want to point at. People have their tendencies. Obviously, they reveal things they're proud of. People are proud of such different things. When this is the medium you have to work with, though, you can't show off in the ways you're used to.

There are obvious constraints.

People would send emails and say, "I really want to use this one, but there's one part I can't share." But that was a constraint.

Did you have to encourage anyone to choose more exciting stuff?

I'm a director -- I'm used to getting exactly what I want. Sometimes I would get something that, at first blush, kind of disappointed me. I would have the temptation to go back and push them. Then a weird thing would happen. I'd start thinking about it more and more and trust them and trust whatever I was expecting wasn't as important as what they came up with. I think this is what good directors do. I'm never that good at it. It always was more than I thought it was at the beginning. That's the good thing about collaborating.

To return to something you mentioned earlier -- the media attention on these people necessarily adds an extra dimension. Would the project be as interesting if it were done with people off the street?

I personally think it'd still be interesting. That's more my territory of where I work. My last book was interviewing people that I met through PennySaver classifieds.

I really like systems, systems that work with a really large scope when possible. My project "Learning to Love You More" [a series of "assignments" online that could be completed by anyone] was ultimately a collaboration with 10,000 people. That's also the thing about the Web and the Internet. If it can happen on a global level and also be shared and has power of being shared, it's like, it's almost a different medium.

I guess I think it's -- it's not better, but you get to work with all these different elements if you can come up with something that, for one reason or another, is shared.

I likely wouldn't be talking to you right now without the participation of celebrities, sad to say.

Even beyond the press, just one person telling another. That was integral to me for this project.

What do you make of celebrity culture?

I don't know, I don't read things like that ... my friend sent me a link from Perez Hilton and it was the first time I'd ever gone there. I was like, Do you finally think I'm cool now? I've never been a real celebrity person. How would you answer that?

I guess I'd say something like, "I am interested in it but it's not all-consuming for me," or, "I view it with mild disdain."

Oh, you just want an answer. You don't want me to take it apart. Well, I get what people I'm supposed to be more interested in than others. But if it's not put right in front of me, I won't go hunting.

Why not include your own emails in the project?

It seems less elegant. The question is raised, Did I just pick categories I wanted to show off in? I feel like that's what makes choices of categories subtler. You have to really look for the hand behind.

Are there things that are empirically too private to share?

Yeah. For me, that's most of my life. I have all kinds of rules within my fairly limited level of celebrity. Me and my husband ["Beginners" director Mike Mills] have never done an interview together -- one of those lifestyle things, "We are a creative couple, here's how we live." There are some things that, I feel, suffer when you do that.

For me it goes back to close friends. I actually am most interested in people I know. I'm most interested in people close to me. I'm pretty scrupulous about not reading my husband's email, but I always delight in getting a CC: with a long payoff and seeing how he engaged with someone else. Not because I'm such a devoted wife but particularly because there's a disconnect. You're seeing them in an unfamiliar way.

Have you ever run into your partner or your friend out in the world? It's so thrilling! If you live together -- it seems remarkable to say, I just saw you and you were walking down the street like a normal person! I would have loved to have translated that feeling and celebrity's the best way to do it. Email makes it almost inverted, though. Inverted, and as if you bumped into them not on the street but in their own house.