Wait, was that 200-year-old rockfish dead by the time it was caught?

Environmentalists can exhale. Experts say it likely didn't survive its trip to the water's surface 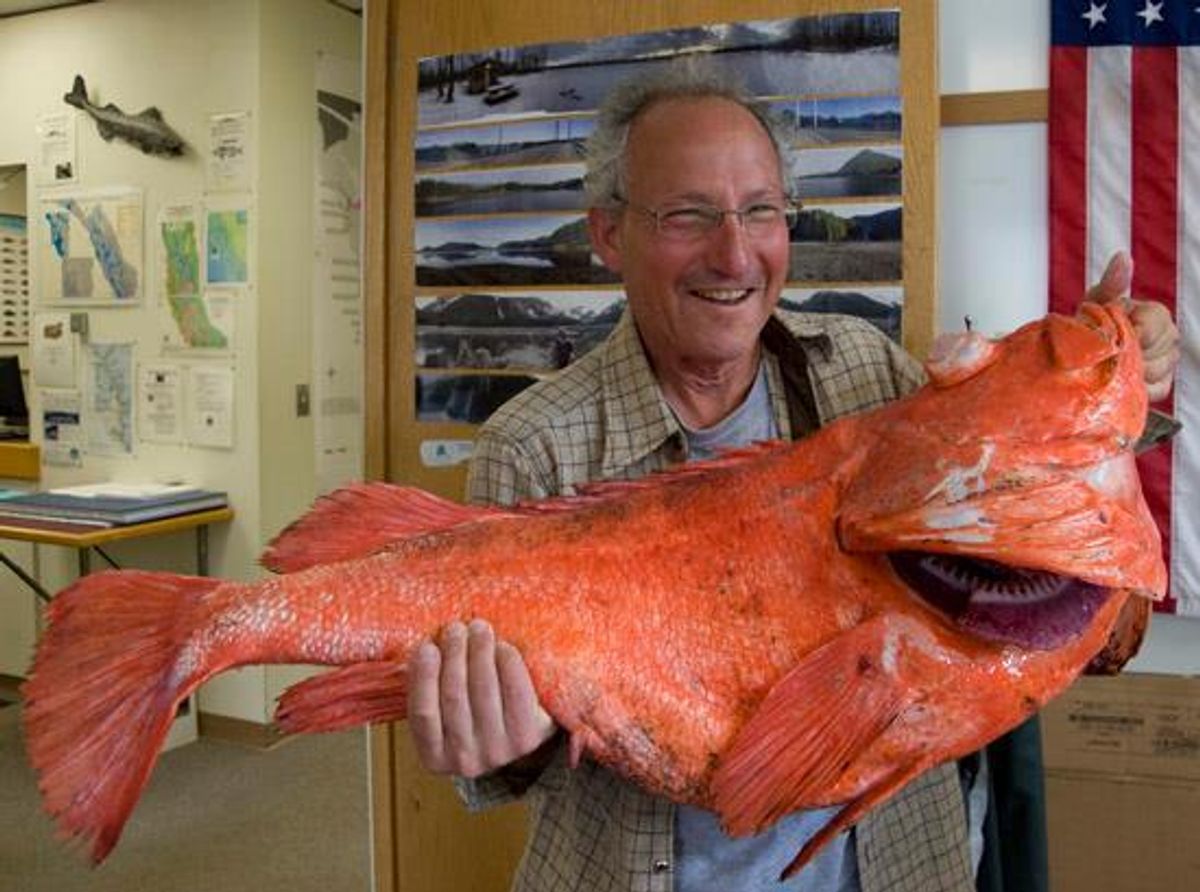 A Rockfish believed to be one of the biggest and oldest ever, which was caught off the coast of Alaska last week by an insurance adjuster and recreational fisherman, has inspired controversy from environmentalists upset that the catch wasn’t released back into the water. But experts say it was likely dead when it reached the surface.

Henry Liebman of Seattle said he knew he’d made an impressive catch as soon as he reeled the large neon orange fish in, but had no idea that experts would estimate the fish’s age at more than 200 years old. According to the Daily Sitka Sentinel, the record-breaking shortraker rockfish was caught at a depth of 900 feet, weighed in at 39.08 pounds and measured nearly 41 inches.

Liebman made the catch on June 21 during one of his regular fishing trips to the town. Rockfish typically live at a depth of 84 feet to 4,000 feet and eat crabs, shrimp and, sometimes, small squid, the L.A. Times reported. “I knew it was abnormally big [but I] didn’t know it was a record until on the way back we looked in the Alaska guide book that was on the boat,” he said.

Troy Tydingco, Sitka area manager for the Alaska Department of Fish and Game, said that officials are still analyzing the fish at a Juneau lab to determine its age. Scientists will age the Rockfish by making incisions in its head and removing earbones called otoliths, which become ringed with time, much like trees.

Tydingco said that it was entirely plausible that the shortraker had been alive for two centuries, although their longevity record is 175 years. “The rougheye is the oldest-aged fish at 205,” Tydingco said. But he added that Liebman’s catch was significantly larger, increasing the odds that it was older.

Tydingco said that the record rougheye “was quite a bit smaller than the one Henry caught.” He added, “That fish was 32 and a half inches long, where Henry’s was almost 41 inches, so his could be substantially older.”

But Liebman’s catch caused a stir on social media, when he told reporters that he planned to bring the fish back with him to Washington and mount it on a wall in his home. His comments provoked outrage especially on Twitter, where users bemoaned the fact that it had been killed, and questioned why Liebman had chosen not to photograph it and release it back into the water.

However, experts say that the fish was likely dead by the time it was caught, and would not have been saved by catch-and-release. Julie Speegle, a spokeswoman for the National Oceanic and Atmospheric Administration, said that due to the Rockfish’s unique organ structure, it cannot withstand pressure above the water’s surface. "When a rockfish caught in 900 feet of water is brought to the surface it usually dies,” Speegle told the Los Angeles Times.

Speegle said that’s because of a gas-filled organ inside the Rockfish, known as a “swim bladder.” The swim bladder gradually inflates as the fish ascends closer to the surface, and helps it guide its buoyancy. But, if the Rockfish gets high enough, its bladder can expand so much that it can cause the fish to die of barotrauma, pressure shock. Several angling organizations have provided guides for how to help Rockfish descend to avoid overinflating their bladders, including using an inverted milk crate, or a weighted release tool. Liebman has not said whether he used any of those methods.