From Robin Thicke's latest songs to abortion restrictions around the country, America's all about men's desires 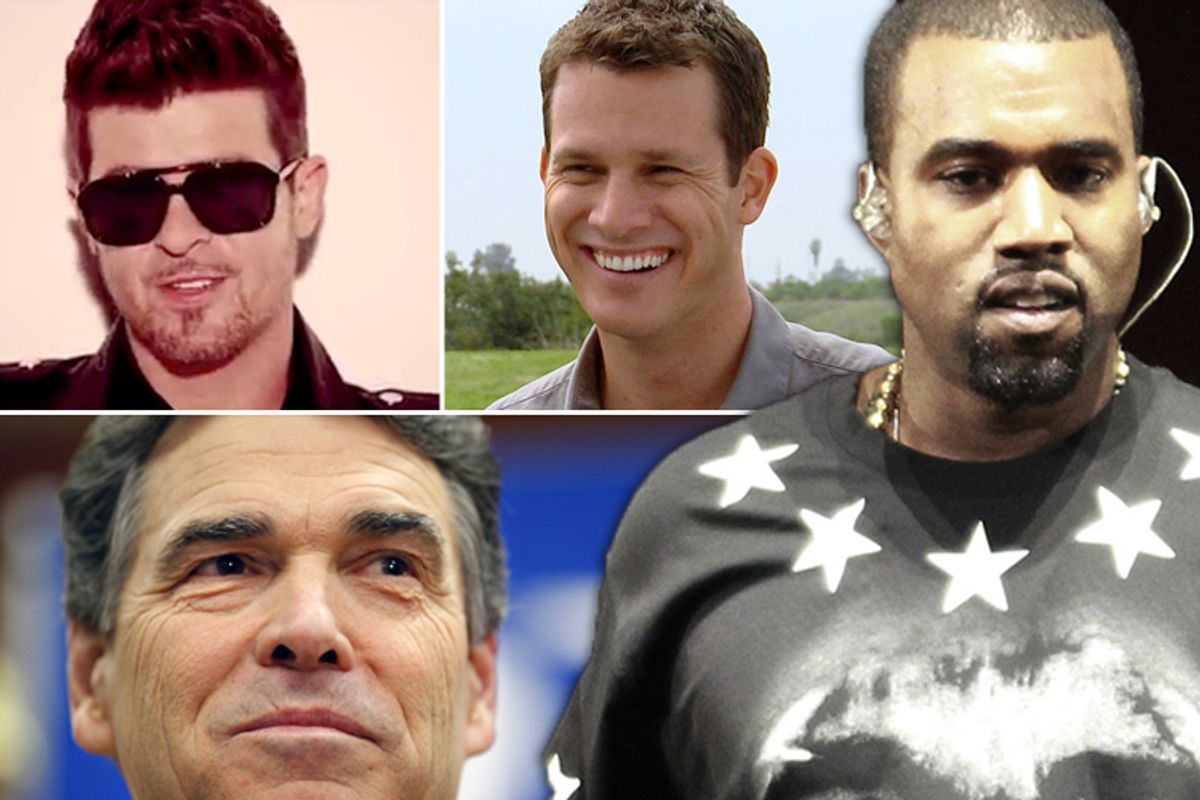 In his single “Blurred Lines,” Robin Thicke sings soulfully about giving a good girl what she really wants—buckwild sex—even if she can’t come out and admit it. It’s a catchy enough song. Some might even call it this summer’s anthem. But “Blurred Lines” is also a song that revisits the age-old belief that sometimes when a woman says no she really means yes.

Critics have been vocal about the sexual violence undertones in the song and they’re not wrong. Robin just knows you want it, girl. He just does, so shut up and let him give it to you. Scores of men and women are, apparently, on board. “Blurred Lines” is Thicke’s most popular song to date. In his latest single, “Give it 2 U,” Thicke doubles down on his bad boy phase with the lyrics “I got this for you / a little Thicke for you / A big kiss for you / I got a hit for you / Big dick for you / Let me give it to you.” In the wake of the criticism, Thicke is fairly unapologetic, saying, “Women and their bodies are beautiful. Men are always gonna want to follow them around.”

I guess that’s that. Men want what they want.

In truth, I like these songs. They make me want to dance. I want to sing along. They are delightful pop confections. But. I enjoy the songs the way I have to enjoy most music—I have to forget I am a sentient being. I have to lighten up.

Take Kanye West's recently released "Yeezus." It's very compelling and ambitious, with sounds that are aggressive if not hostile. I’ve been listening to the album on repeat. I want to love Yeezus but I can’t because I hear lyrics like, “You see it’s leaders and it’s followers / But I’d rather be a dick than a swallower.” Kanye's disdain for women overwhelms nearly every track -- but then there's a song like “Blood on the Leaves,” which is so outstanding you can’t possibly dismiss the album.

This is just music, right? These artists are merely expressing themselves.

The debate over rape jokes continues. My overall stance is pretty well documented, but as a writer, I recognize the necessity of creative freedom. I have finally heard funny rape jokes — Ever Mainard’s joke about the fear instilled in women and the assumption of the inevitability of rape and Wanda Sykes’s joke about wanting a detachable vagina. I still hate rape jokes but I hate censorship more. I hate that I have to choose.

Ken Hoinsky has also been in the news recently. He ran a successful Kickstarter for his book “Above the Game,” where he doles out his wisdom as a pick-up artist to help men who might be shy or awkward around the ladies. When a critical mass of people became aware of Hoinsky’s Kickstarter project, and there was outcry because some of Hoinsky’s advice -- well, it’s questionable. It blurs lines. Though they didn’t cancel the project, Kickstarter apologized. They won’t allow seduction guides to use their platform in the future. They made a significant financial contribution to RAINN. Hoinsky will publish his book and join a small legion of pick-up artists who treat women as conquests rather than human beings, who believe that when a woman says no, she’s really saying maybe.

Men want what they want.

So much of our culture caters to giving men what they want. A high school student invites model Kate Upton to attend his prom, and he's congratulated for his audacity. A male fan at a Beyoncé concert reaches up to the stage to slap her ass because her ass is there, her ass is magnificent, and he wants to feel it. The science fiction fandom community is once again having a heated discussion, across the Internet, about the ongoing problem of sexual harassment at conventions — countless women are telling all manner of stories about how, without their consent, they are groped, ogled, lured into hotel rooms under false pretenses, physically lifted off the ground, and more.

But men want what they want. We should all lighten up.

It’s hard not to feel humorless as a woman and a feminist, to recognize misogyny in so many forms, some great and some small, and know you’re not imagining things. It’s hard to be told to lighten up because if you lighten up any more, you’re going to float the fuck away. The problem is not that one of these things is happening, it’s that they are all happening, concurrently and constantly.

These are just songs. They are just jokes. They are just movies. It’s just a hug. They’re just breasts. Smile, you’re beautiful. Can’t a man pay you a compliment? In truth, this is all a symptom of a much more virulent cultural sickness — one where women exist to satisfy the whims of men, one where a woman’s worth is consistently diminished or entirely ignored.

Or I could put it this way. Let’s say this is simply the world we live in. If there is a spectrum of misogyny with pop culture on one end and the disrespect for women’s boundaries in the middle, on the other end, we have our nation’s lawmakers who implicitly encourage this entire spectrum to thrive.

State legislators in Texas, Ohio and North Carolina (and that’s just this week) are trampling all over reproductive freedom — trying, among other things, to limit when a woman can have an abortion and where abortions can be provided as well as redefining what a fetus is.

On June 30th, in their Room for Debate section, The New York Times asked, “Would support for abortion rights grow if more women discussed their abortions?” When I first saw this question, I bristled. Women shouldn’t have to sacrifice their personal histories to enlighten those who are probably uninterested in enlightenment. At some point, the greater good isn’t enough of a justification for this sacrifice.

Here’s a woman’s story. Who she is doesn’t matter. She could be any woman — a friend, a sister, a mother, an aunt. Say she becomes pregnant. Say the pregnancy is unplanned but she’s financially and emotionally stable enough that she and her boyfriend decide, let’s do this. Say she’s pro-choice but from the moment she realizes she’s pregnant, it feels like she’s carrying a baby. Still, she is staunchly pro-choice, always will be. Say if she didn’t think she and her boyfriend could give the baby a good life, she would have an abortion. Say she’s in the kitchen during her 27th week when she falls to her knees because there is a terrible cramping in her abdomen. Say she starts bleeding and it won’t stop. Say she and her boyfriend rush to the hospital. Say she loses consciousness. Say when she wakes up, the baby is gone because it came down to her life or the baby’s. Say she spends years feeling like the wrong choice was made. This is a story about reproductive freedom. This is a story about a woman’s life and the value of her life. Choices were made. Choices were taken away. Say this woman lived in a state where certain choices were sacrificed in favor of the sanctity of life. Say she died, and so much for sanctity. Who would tell her story then?

And what if she doesn’t want to tell her story? What if it’s too personal, too painful? What do these confessions really do? Some people will be moved, but those are rarely the same people who support legislation to erode reproductive freedom. Immovable people will not be moved by testimony. Her story becomes an emotional spectacle, something for people to consider, briefly, before moving on to the next sad story. There is no shortage of sad stories when it comes to women and their reproductive lives.

The United States is supposedly predicated on the notion of inalienable rights but we have ample evidence that the rights of women are and always have been alienable. Robin Thicke sings about what he knows a woman wants. Fine. Daniel Tosh encourages his fans to touch women lightly on the stomach and film themselves doing so. Fine. Ken Hoinsky believes persistence is a virtue. Fine. Texas governor Rick Perry says, of Senator Wendy Davis, “She was the daughter of a single woman. She was a teenage mother herself. She managed to eventually graduate from Harvard Law School and serve in the Texas Senate. It’s just unfortunate that she hasn’t learned from her own example that every life must be given a chance to realize its full potential and that every life matters.” Fine. In Ohio, any woman seeking an abortion must get an ultrasound. If she has complications from an abortion, she must go to a private rather than public hospital. In North Carolina, pending legislation would require a physician to be in attendance for both medical and surgical abortions. In Texas, if what is now HB2 passes, all but five of the state’s abortion clinics will close. The legislators pushing these initiatives are just looking out for women. Men want to protect women -- unless of course, they want to grab those women's asses.

Lighten up. Men want what they want. Blurred lines, indeed.