With two wars ending, the “defense” industry sets its sights on its next chance to hit pay dirt: The U.S. border 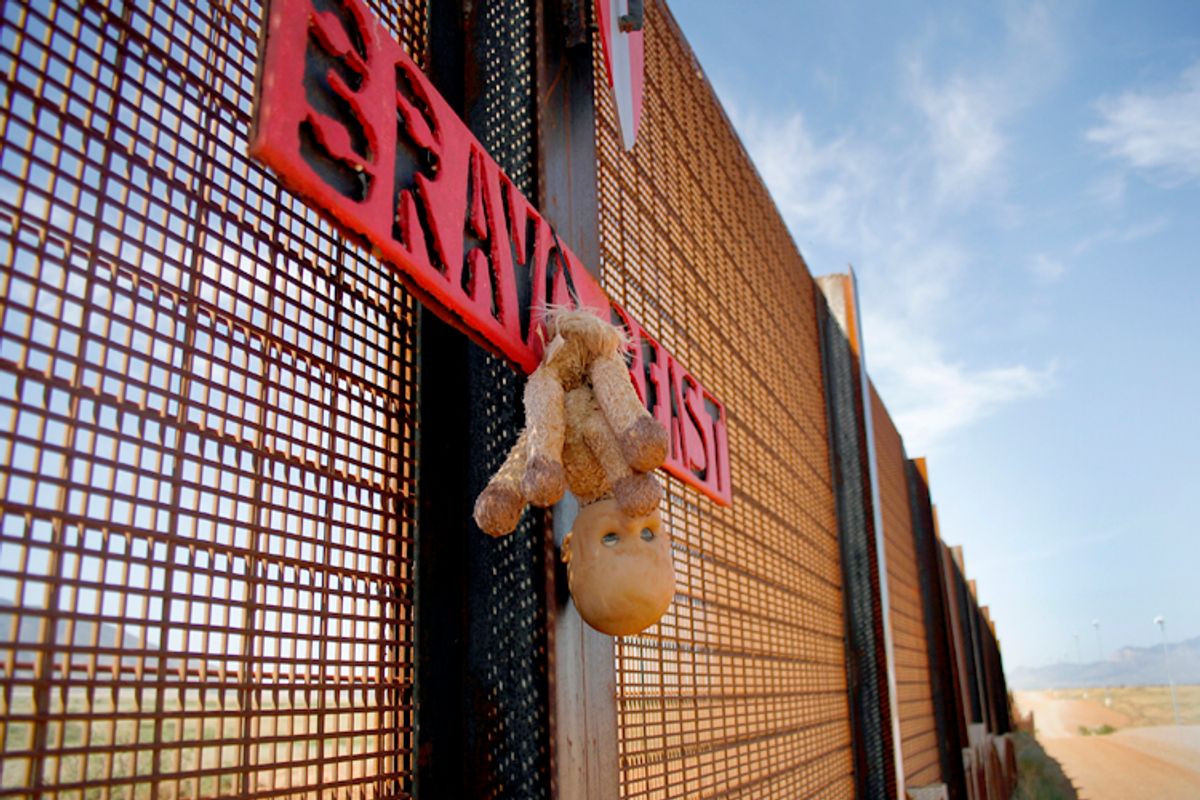 Last week, John McCain gleefully announced that the Senate immigration bill would result in the “most militarized border since the fall of the Berlin Wall.” Indeed, an amendment authored by Sens. Bob Corker, R-Tenn., and John Hoeven, R-N.D., authorizes a massive increase in border security dollars -- including $30 billion for hiring and training 19,000 new border patrol officers over the next 10 years, and over $13 billion for a “comprehensive Southern border strategy” (including 700 miles of high-tech fencing).

What the senators didn’t tout was that the wall is both functionally useless – and will enrich some of the largest military contractors in the world.

Only about half of the country's unauthorized immigrants entered illegally through the Southern border to begin with. And with illegal entries at a 40-year low, and the undocumented population down by a million from its 2007 peak, the right's fetish for security spending is shaping up to be a boondoggle for giant defense contractors with a consistent track record of bungling past efforts to “secure the border.”

The amendment passed with 67 votes, including the support of 15 Republicans. NBC News found it “striking” that “some of these Republican senators had opposed previous immigration-reform efforts -- like the 2010 DREAM Act.” But, really, it's not so striking. Immigration reform is being loaded up with a ton of the sort of “bloated government” and “wasteful spending” the right can get behind: military spending.

Perhaps by design, the defense industry is pushing friendly lawmakers to advance the pork-laden bill. Eric Lipton of the New York Times reported that, “the nation’s largest military contractors, facing federal budget cuts and the withdrawals from two wars, are turning their sights to the Mexican border in the hopes of collecting some of the billions of dollars expected to be spent on tighter security if immigration legislation becomes law.”

The Corker-Hoeven amendment spells out the kinds of equipment to be deployed in very specific terms. In the sector covering Yuma and Tucson, Ariz., for example, it calls for 50 fixed surveillance towers, 72 fixed camera towers with remote surveillance capabilities, 28 mobile surveillance systems, 685 unattended ground sensors and 22 hand-held night-vision and thermal imaging systems.

Reached by phone in Chihuahua, Mexico, Tom Barry, a senior analyst at the Center for International Policy and author of "Border Wars," told Salon that the effort is simply “absurd.” “Border patrol agents are tripping over themselves now,” he said. “They have nothing to do. They're reading magazines in their trucks. If they increase the force by the levels they're talking about now, you'll have measures of boredom and waste that are almost inconceivable.”

He added that the Border Patrol finds itself “trapped” in its increasingly military rhetoric. “Any measure of border security short of shutting the whole thing down leaves room for people to demand more money. And if you're looking at the high-tech end of it, the cost-benefit ratio hasn't been proven,” he said. “It's a big waste of money – from drones to these high-tech virtual fences, they just haven't shown to be effective.”

But despite that, Lipton reports that military contractors like Raytheon, Lockheed Martin and General Dynamics “are preparing for an unusual desert showdown” this summer, when they will gather in the desert to show off their high-tech gizmos to Homeland Security officials.

KBR -- a firm that gained infamy by allegedly exposing soldiers in Iraq to toxic substances, giving them ice tainted by “bodily fluids and putrefied remains,” turning a blind eye to sexual assault (and then suing a woman who claimed to have been imprisoned by the company after reporting that she had been raped), and avoiding paying “hundreds of millions of dollars” in taxes by hiring workers through shell companies located in tropical tax havens -- bills itself as “a major provider of border security and protection” that has “been deemed a proven supplier of command and control solutions.”

A 2012 report by the Department of Homeland Security's inspector general (PDF) found that because DHS had more drones than it could deploy, some of them sit idle on the ground. And as NPR reported, the agency itself acknowledges that operating small, piloted aircraft costs just a tenth as much as operating unmanned aerial vehicles. But General Atomics, a company that builds Predator drones as well as “the ground stations that control them and provides pilot training and support services for field operations,” spent almost $2.5 million lobbying Congress last year, according to OpenSecrets. The Corker-Hoeven amendment authorizes DHS to buy four additional drones on top of the 10 it already operates.

Yet, it's the “danged fence” that may prove to be the biggest boondoggle yet. In 2006, Congress passed the “Secure Fence Act,” mandating the construction of 700 miles of high-tech barriers on the Southern border. Rather than hire Mexican workers to do the job, DHS made the poor decision to award a three-year indefinite delivery/indefinite quantity contract to Boeing. Five years, $1.2 billion and 299 miles of fencing later, the project was canceled due to cost overruns, delays and an endless series of technical glitches caused by the extreme heat of the border region. A 2011 inspector general's report concluded that DHS had wasted $69 million in taxpayer dollars just by buying up more steel than it needed, and then storing the excess (and paying interest on missed storage payments). According to the report, DHS also moved forward with the fence “before legally acquiring land or meeting international treaty obligations.”

As NBC News notes, “Building border fortifications didn't always cost so much. Earlier fence projects were carried out using scrap metal and Border Patrol or National Guard laborers, but as more and more barriers were approved and deadlines imposed, private contractors overseen by the Army Corps of Engineers took over the work.”

Despite a shady track record, Customs and Border Protection was moving ahead with a renewed push for more barriers even before the Senate bill had been written. The agency had set a January  deadline to award a contract for the next phase of the project, but according to the industry journal NextGov, “a flood of submissions” from eager vendors forced CBP to push back the deadline until October.

And cost isn't the only issue. The government has used eminent domain to seize private properties for the fence, allegedly paying below-market prices to “hundreds of landowners from Texas to California who couldn't afford lawyers and must now live with a massive steel barrier running through their farms, ranches and yards,” according to an analysis by the Associated Press.

And while CBP claims that the heavily militarized border imposes only “negligible to moderate adverse impacts” on the environment, University of Texas legal scholars Lindsay Erickson and Melinda Taylor write that the claim “is inaccurate, according to ecologists and wildlife biologists and information contained in the government’s own preliminary environmental documents.” They say “the detrimental effect of the border wall on wildlife and the environment” will be “significant.”

Economist Dean Baker told Salon, "The border fence is ungodly stupid, but I suppose we can at least see it as a form of stimulus (paying people to dig holes and fill them up again)." That may be the case, but it isn't going to address the problem of undocumented immigration. The context to all of this is that in 1994, we spent $550 million on border security and had between 4 million and 5 million unauthorized  immigrants. Since then, we've increased spending on the border by more than 30-fold, to $18 billion last year, even as the undocumented population swelled to over 11 million.