Updated: There was no distress call from the pilot. 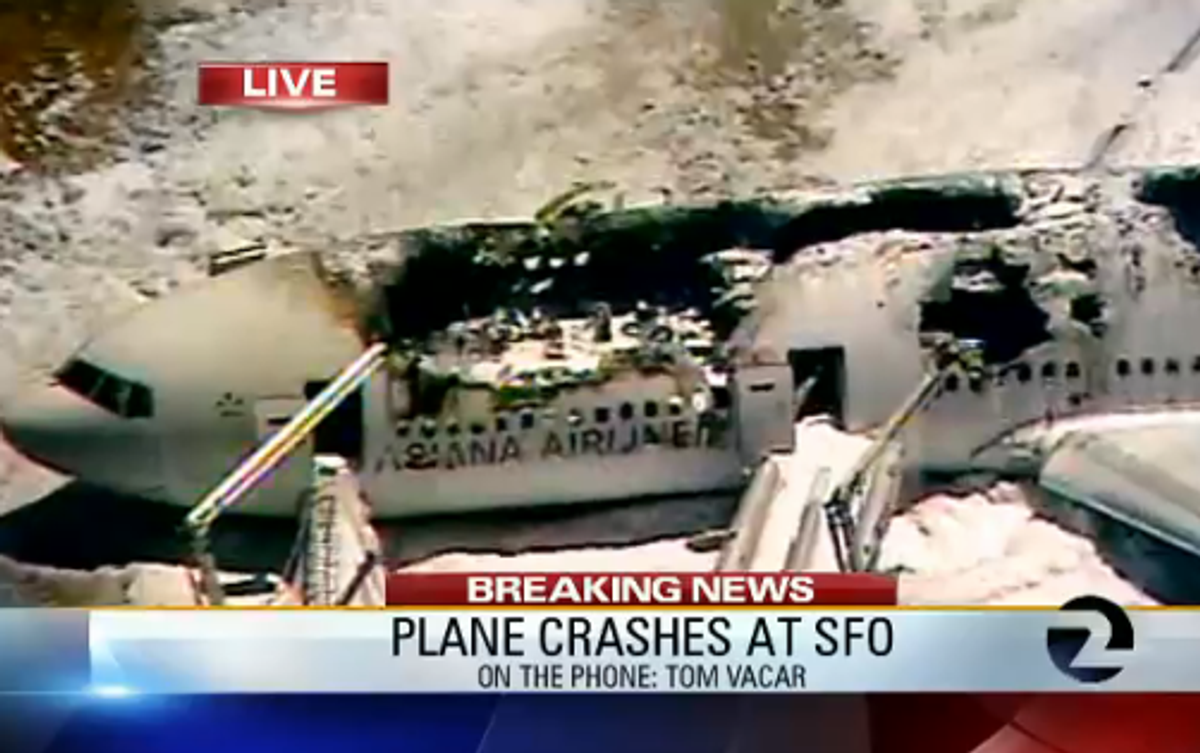 A Boeing 777 operated by the Korean airline Asiana crashed at San Francisco airport while trying to land today.

Images and video posted on social media by eyewitnesses to the crash showed the plane laying on the ground, its nose pointed slightly upward, apparently on fire and billowing smoke. The crash could be seen from some distance. The images appeared to show that the plane had lost its tail.

Stefanie Laine, one of those who posted on Twitter that she had witnessed the crash, said that the “plane came in at a bad angle, flipped, exploded.”

Firefighters on the scene, but there were no reports yet of the extent of casualties. It was not clear how many people were on board. The F.A.A. said it could not immediately provide further details.

We'll be updating this space. Send updates and information to readermail@salon.com.

Boston Globe reporter Wesley Lowery quoted a passenger who was on the flight:

Correction: Lowery was not on the flight, as this space previously reported.

KTVU has reported that all access to the airport has been cut off. The flight was coming in from Seoul when:

According to a witness, the plane was just about to land -- its landing gear had come down -- when the tail of the plane came off.

After wobbling for a minute, it appeared that the aircraft flipped upside down, coming to a stop on runway on it's back, according to witness Kathy Muhler.

Chopper footage from over the crash showed that the wings were still attached, contradicting the possibility that it rolled over on its back.

USA today reports that there were 291 people aboard.

Passengers who got off the plane told reporters they did not believe there were any fatalities. Images from the scene showed smoke billowing from the plane and emergency exits open from the plane's fuselage, with the tail separated from the aircraft. Gaping holes could be seen in the roof of the plane's body, blackened by fire.

Quoting an unnamed aviation official, the New York Times reports that the situation was "entirely normal" until the crash.

Facebook's chief operating officer Sheryl Sandberg was supposed to be on the plane. Here's what she wrote on the site:

Taking a minute to be thankful and explain what happened. My family, colleagues Debbie Frost, Charlton Gholson and Kelly Hoffman and I were originally going to take the Asiana flight that just crash-landed. We switched to United so we could use miles for my family's tickets. Our flight was scheduled to come in at the same time, but we were early and landed about 20 minutes before the crash. Our friend Dave David Eun was on the Asiana flight and he is fine.

Thank you to everyone who is reaching out - and sorry if we worried anyone.

Serious moment to give thanks.

Updated 5:02 p.m. eastern:
As of now neither Boeing nor Asiana appear to have released a statement on their Web sites.

According to the ASN Aviation Safety Database the 777 has been involved in 8 "occurences" i.e. incidents since 1997. If there are any fatalities from the SFO crash they would be the first in-flight fatalities that the plane model has experienced. A British Airways 777 experienced the planes only other "loss of hull" incident during a landing at London's Heathrow Airport in 2008. There are additional details of that flight at Airsafe.com.

Boeing has tweeted that it will assist authorities.

Updated 6:23 p.m. eastern:
The Washington Post reports that there was no distress call from the pilot though the plane may have descended too steeply.

Numerous sources are reporting that there were two fatalities from the crash and 10 people in critical condition. The local NBC team reported that up to 70 people have been hospitalized with injuries.