For once, Ai Weiwei should be sorry

Much to this fan's chagrin, the artist's new heavy metal music project is laughably bad 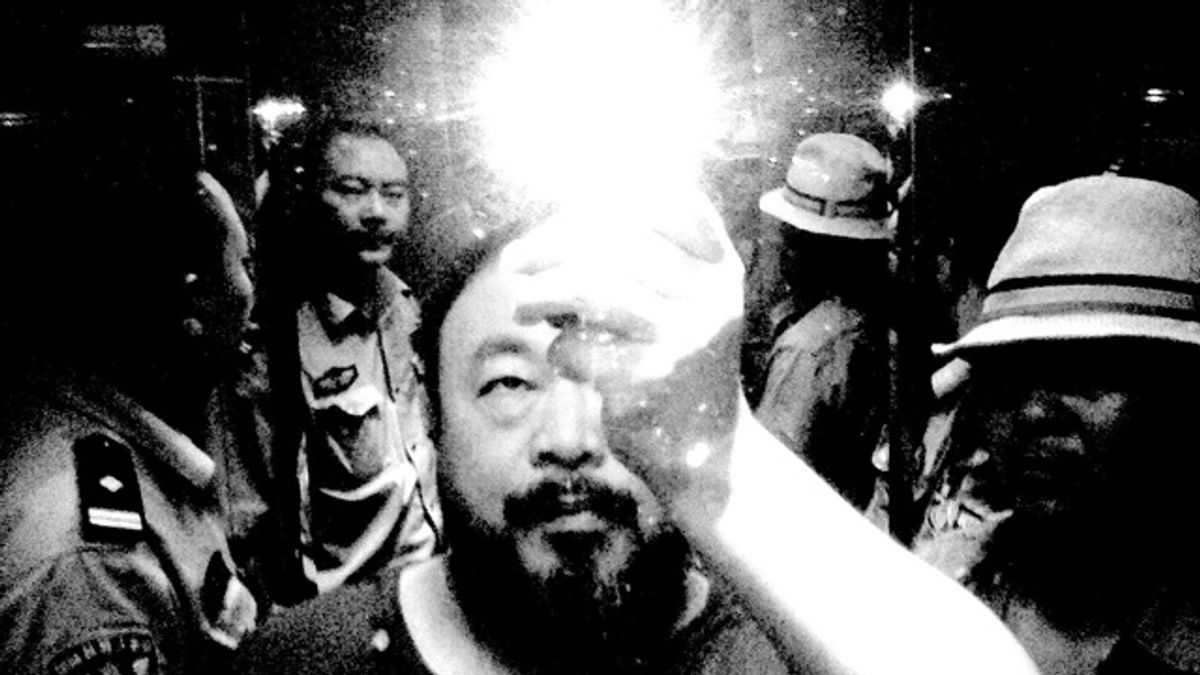 The cover of Ai Weiwei’s “Divine Comedy” album is his infamous photo first posted on Twitter from during his detention.
--

We’ve been through this before. I’m a HUGE Ai Weiwei fan. He somehow continues to send out beautiful and challenging transmissions from behind the bonefart razor wall of oppression and torture that is the Chinese government. He was a 100 percenter as far as I was concerned, from intention to viewpoint to execution. Always on, never sorry.

And then the music started. Golden art god, interrupted.

I was originally excited about the prospect of Ai Weiwei doing a music project, especially when I heard that he was going to exploit the genre of Heavy Metal, something close to my heart. I immediately had thoughts of Ai spewing rage on top of a bed of rancid, righteous riffage. Then, the first song from the album, “Dumbass,” appeared. Terror, floating in a small pool of tepid, slightly spoiled milk. As I mentioned in the earlier Hyperallergic post, the video and the song were derivative and lame. Derivative is fine, but there is no greater crime in Metal than being lame.

Now, the rest of the album, ironically entitled The Divine Comedy, has appeared, and I’m sad to report that things have gone from bad to worse. I listened with open ears, even though I’d given up on my Ai Weiwei Metal dreams. I knew it wasn’t going to be the Metal that I’d hoped for, but I was still cheering for it, low expectations and all. If the jams are good, the jams are good. But the jams, they are not good.

The music is dismal enough that it renders the lyrics moot. Worse yet, it makes the emotion behind Ai’s vocalizations laughable. Ai is screaming about torture, and I am laughing. This should not be happening. Every other line could lead to jail time for Ai. Deadly serious stuff, sadly turned comic. Occasionally, there is a dissonance applied under the surface of the music in what feels like a desperate attempt to rescue it from its own ineffectualness.

In 1993, Kurt Cobain tried to employ some raw, squawky guitar tricks to a recording of William S. Burroughs reading a short piece. The story didn’t need the darkness. It had that in spades. It needed a frame. Cobain failed miserably to supply that. Ai Weiwei’s musical collaborator, Zuoxiao Zuzhou, doesn’t just fail to create a relevant frame, he waterboards Ai’s message of rage from beginning to the end, drowning any chance the project has of impact.

The single, “Dumbass,” was clearly an attempt at Metal. The other five are not that. Or, at least, I hope Ai and Zuoxiao don’t think they are. It’s a bit difficult to tell. Song by song, here are the musical crimes committed:

To return for a moment to Lou Reed and Metallica’s collaborative album, Lulu. It was a failure, and it wasn’t even a glorious failure. The reviews were justifiably bad (And hella fun to read!). They had all reached a certain level in their careers where they could do anything they wanted. Unfortunately for the rest of us, that’s just what they did. I had a certain amount of respect for the musicians for even trying this, but I would have had even more if, after they’d finished, they would have just put the tapes in a drawer somewhere and left them there to disintegrate.

Just because an artist has the cachet and resources to do anything they want has no bearing on whether or not they have the skills to do it. Ai Weiwei makes bad choices at every turn in The Divine Comedy. His taste in choosing Zuoxiao Zuzhou as a collaborator is the first and last thing that sinks this project. And smack dab in the very fat middle of this thing is the fact that nobody said no to an artist who thought he could do anything.

My dreams of Ai kicking against the pricks with the help of someone like Dying Fetus are gone, a stillborn thing. But Ai Weiwei will be OK. I look forward to his next arrows aimed at the Empire walls and our hearts. He’s a brave man and artist. He really is never sorry. But The Divine Comedy is just that. Sorry.