With dozens of people reported missing, authorities fear they could find more bodies 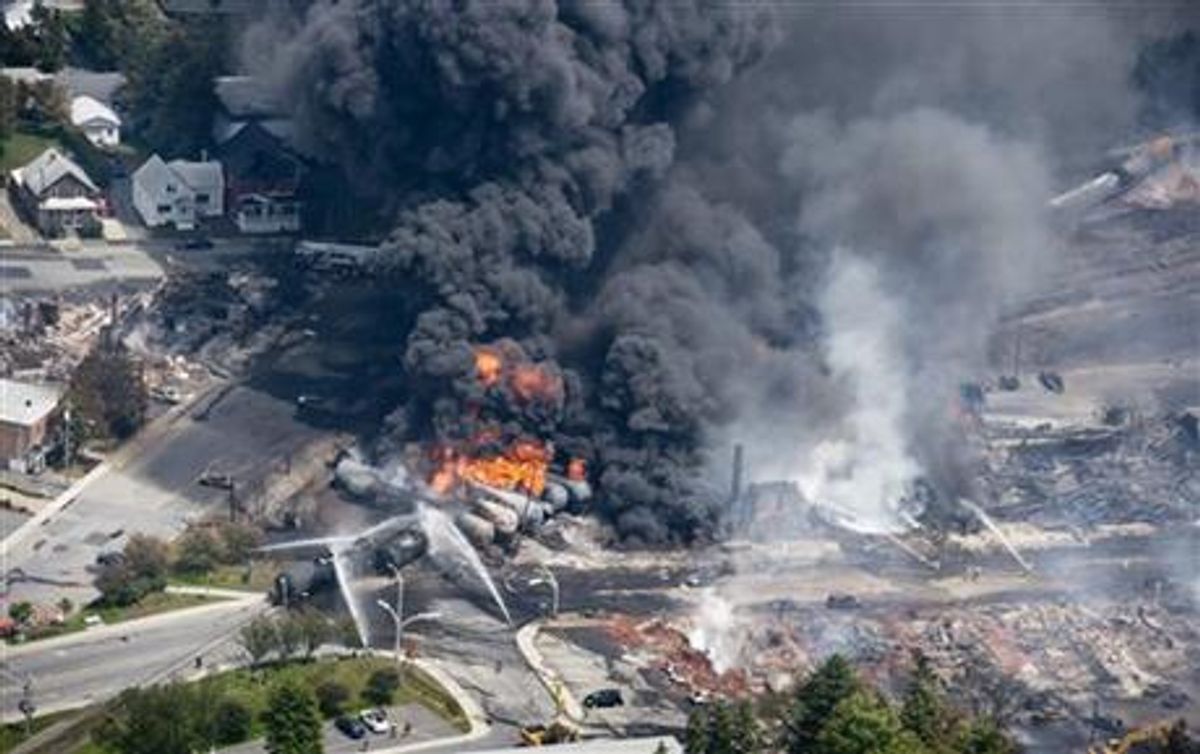 LAC-MEGANTIC, Quebec (AP) — As firefighters doused still burning oil tanker cars, more bodies were recovered Sunday in this devastated town in eastern Quebec, raising the death toll to five after a runaway train derailed, igniting explosions and fires that destroyed the downtown district. With dozens of people reported missing, authorities feared they could find more bodies once they reached the hardest-hit areas.

Quebec provincial police Lt. Michel Brunet said Sunday that about 40 people have been reported missing, but cautioned that the number could fluctuate up or down.

"We met many people who had reported family members missing. Right now I can tell you about 40," Brunet said.

All but one of the 73 cars were filled with oil, which was being transported from North Dakota's Bakken oil region to a refinery in Saint John, New Brunswick.

The eruptions early Saturday morning sent residents of Lac-Megantic scrambling through the streets under the intense heat of towering fireballs and a red glow that illuminated the night sky.

"This is really terrible. Our community is grieving and it is taking its toll on us," Mayor Colette Roy-Laroche said.

Prime Minister Stephen Harper toured the town on Sunday to offer his condolences.

The search for victims in the charred debris was hampered because two tanker cars were still burning Sunday morning, sparking fears of more potentially fatal blasts.

Lauzon said firefighters are staying 500 feet (150 meters) from the burning tankers, which are being doused with water and foam to keep them from overheating.

The multiple blasts came over a span of several hours in the town of 6,000, which is about 155 miles (250 kilometers) east of Montreal and about 10 miles (16 kilometers) west of the Maine border.

About 30 buildings were destroyed after tanker rail cars laden with oil caught fire and exploded in the picturesque lakeside town in Quebec's Eastern Townships.

The derailment caused at least five tanker cars to explode in the downtown district, a popular area packed with bars that often bustles on summer weekend nights. Police said the first explosion tore through the town shortly after 1 a.m. local time. The fire then spread to several homes.

Brunet said he couldn't say where the bodies were found exactly because the families have not been notified.

The cause of the accident was believed to be a runaway train, the railway's operator said.

Edward Burkhardt, the president and CEO of Rail World Inc., the parent company of Montreal, Maine & Atlantic Railway, said the train had been parked uphill of Lac-Megantic because the engineer had finished his run. The tanker cars somehow came loose and sped downhill nearly seven miles into the town before derailing.

"We've had a very good safety record for these 10 years," Burkhardt said of the decade-old railroad. "Well, I think we've blown it here."

Joe McGonigle, Montreal, Maine & Atlantic's vice president of marketing, said the company believes the brakes were the cause. He said the rail company has been in touch with Canada's Transportation Safety Board.

"Somehow those brakes were released and that's what is going to be investigated," McGonigle said in a telephone interview. "We're pretty comfortable saying it is the brakes. The train was parked, it was tied up. The brakes were secured. Somehow it got loose."

Lauzon, the fire chief, said that firefighters in a nearby community were called to a locomotive blaze on the same train a few hours before the derailment. Lauzon said he could not provide additional details about that fire since it was in another jurisdiction. Nantes Fire Chief Patrick Lambert couldn't be immediately reached, but McGonigle confirmed the fire department showed up after the first engineer tied up and went to a local hotel and after someone reported a fire.

"We know that one of our employees from our engineering department showed up at the same time to assist the fire department. Exactly what they did is being investigated so the engineer wasn't the last man to touch that train, we know that, but we're not sure what happened," McGonigle said.

McGonigle said there was no reason to suspect any criminal or terror-related activity.

Because of limited pipeline capacity in North Dakota's Bakken region and in Canada, oil producers are increasingly using railroads to transport much of the oil to refineries on the East, Gulf and West coasts, as well as inland. Harper has called railroad transit "far more environmentally challenging" while trying to persuade the Obama administration to approve the controversial Keystone XL pipeline from Canada to the Gulf Coast.

The proliferation of oil trains has raised concerns of a major derailment like this. McGonigle said it is a safe way to transport oil.

"There's much more hazardous material that moves by rail than crude oil. We think it is safe. We think we have a safe operation. No matter what mode of transportation you are going to have incidents. That's been proven," McGonigle said. "This is an unfortunate incident."

Myrian Marotte, a spokeswoman for the Canadian Red Cross in Lac-Megantic, said there are about 2,000 evacuees and said 163 stayed at their operations center overnight.

"There are those are still looking for loved ones," Marotte said.

Marotte said many of the evacuees are staying with family and friends. "Some people have lost everything," she said.

Lines of tall trees in the area looked like giant standing matchsticks, blackened from bottom to tip. Witnesses said the eruptions shook residents out of their slumber and sent them darting through the streets.

Patrons gathered at a nearby bar were sent running for their lives after the thunderous crash and wall of fire blazed through the early morning sky.

Bernard Theberge, who was outside on the bar's patio at the time of the crash, feared for the safety of those inside the popular Musi-Cafe when the first explosion went off.

"It was like a movie," said Theberge, who considered himself fortunate to escape with only second-degree burns on his right arm. "Explosions as if it were scripted — but this was live."

Firefighters and rescue workers from several neighboring municipalities, including Sherbrooke and Saint-Georges-de-Beauce, were called in to help deal with the disaster. Firefighters from northern Maine were also deployed to the Quebec town, according to a spokesman at the sheriff's office in Franklin County.

The train belongs to Montreal Maine & Atlantic. According to the railroad's website, the company owns more than 500 miles (800 kilometers) of track serving Maine, Vermont, Quebec and New Brunswick.

Last week a train carrying petroleum products derailed in Calgary, Alberta, when a flood-damaged bridge sagged toward the still-swollen Bow River. The derailed rail cars were removed without spilling their cargo.

The Quebec accident was likely to have an impact across the border. In Maine, environmentalists and state officials had previously raised concerns about the threat of an accident involving the rail tank cars carrying crude oil across the state.

Maine state officials were notified about concerns about the smoke from the fire but staff meteorologists don't believe it will have a significant impact, Peter Blanchard of the state Department of Environmental Protection said Sunday.

The Maine environmental agency had previously begun developing protection plans for areas in the state through which the oil trains travel.

But Glen Brand, director of the environmentalist Sierra Club's Maine chapter, said the Quebec derailment is reason enough to call for an immediate moratorium on the rail transport of oil through the state.