Pay no attention to my anti-gay bigoted past! 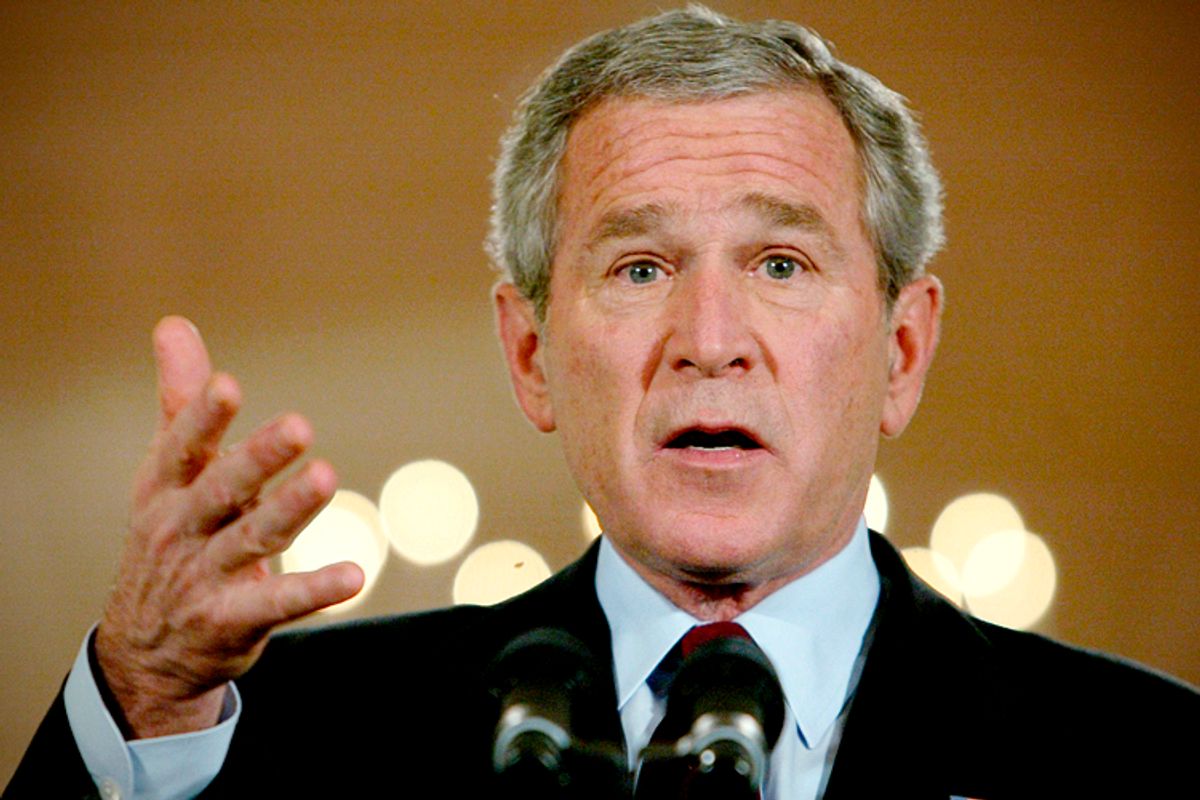 Over the weekend, former President George W. Bush publicly derided those who demonize LGBT Americans. As ABC News reports, he "cautioned against criticizing gay couples," saying that "it's very important for people not to be overly critical of someone else until you've examined your own heart." The statement followed Bush telling a reporter in Zambia that “I shouldn’t be taking a speck out of someone else’s eye when I have a log in my own."

It sounds great, and the principle Bush is now espousing is certainly laudable. But the former president's platitudes shouldn't wipe the historical record clean of his record doing exactly the opposite of what he now preaches.

In the midst of the 2004 election, Bush announced his support for a constitutional amendment to ban same-sex marriage. That year, Bush presided over a Republican Party whose get-out-the-bigot-vote effort included putting anti-gay ballot measures in 11 states.

After the election, it was much the same thing. Bush's top strategist, Karl Rove, publicly bragged that the GOP's anti-gay crusade "was part and parcel of a broader fabric where this year moral values ranked higher than they traditionally do." Consequently, Bush had his administration publicly reiterate his commitment to constitutionally banning same-sex marriage.

So, in sum, 1) Bush was one of the most publicly anti-gay presidents in American history, 2) he made anti-gay demagoguery a more integral part of his electoral strategy than any president before him and 3) all of his anti-gay initiatives were fundamentally based on being "overly critical" of same-sex couples -- so critical, in fact, that the initiatives championed official legislative restrictions on LGBT Americans' basic rights.

In recent years, of course, we've seen a number of those who engineered Bush's anti-gay crusade disavow this record of extremism. For instance, Ken Mehlman, who ran Bush's 2004 reelection, is now a supporter of legalizing same-sex marriage. Likewise, despite his integral role in Bush's campaign in 2004 and despite his bragging about the political success of demonizing same-sex couples, Rove now insists with a straight face that he actually had nothing to do with any of it.

Now, there's Bush himself appearing on a Sunday television show to re-image himself as a preacher of tolerance (and there's ABC reporter Jonathan Karl somehow not bothering to ask the former president about his actual record). Sure, Bush didn't renounce his opposition to same-sex marriage, but he most definitely is trying to portray himself as a tolerant guy on the issue of equality.

Put it all together, and it looks like a loosely coordinated GOP effort to blur the nation's memory of the hideous bigotry that defined the country's politics only a few years ago.

Now, sure, at one level, there's a "better late than never" quality to it, and it's certainly better that Bush is now preaching tolerance rather than simply digging in and endorsing the kind of hate that helped get him reelected in 2004.

But while that turnaround -- or, perhaps "evolution" -- on equal rights is better than the opposite, it shouldn't make us forget the history, nor should it distract from what America must demand from a public figure who implies he's had a change of heart.

But we shouldn't accept it at face value unless there's at least some sort of contrition. Bush could, for instance, simply follow Bill Clinton, who published a March Op-Ed in the Washington Post expressing regret (though, granted, not fully apologizing) for signing the Defense of Marriage Act. Bush could do the same thing, only for the even worse act of mounting a public campaign against same-sex couples -- a campaign that harmed lives and caused widespread pain.

Without such contrition, Bush's new live-and-let-live platitudes are nothing more than a self-serving attempt at historical revisionism -- the kind that encourages us to forget the actual history, and therefore makes it more likely for history to repeat itself in the future.