Doctors said I wasn't fat enough for weight-loss surgery. But I got it done anyway -- and suffered the consequences 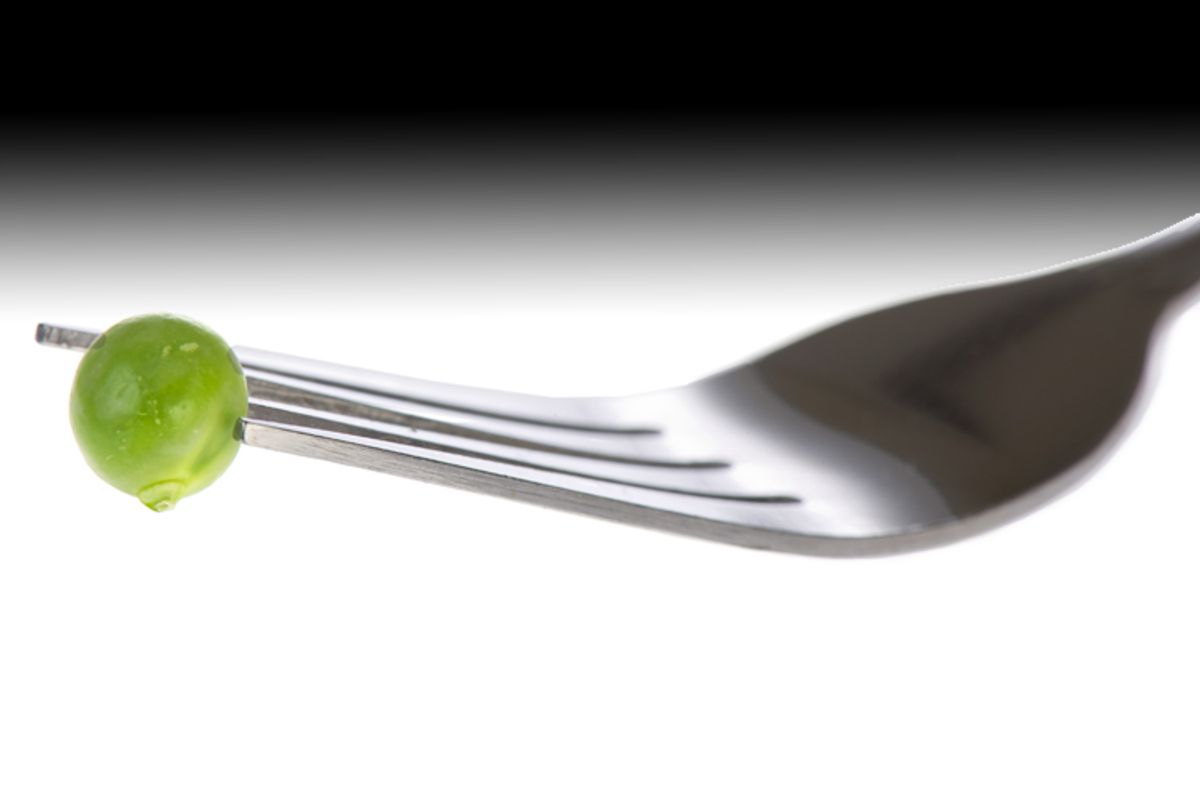 I tipped the scales at 206 pounds, and I was miserable. I needed to get healthy, but that was easier said than done. I loved sweets, and soda, and pasta, and everything that would put me into a food coma so I didn’t have to feel my feelings.

I was six years clean after a long, catastrophic addiction to heroin and cocaine. In the past I used drugs to lose weight; this time, my only option was to eat better. I had spent many therapy sessions exploring the reasons for my overeating, but they were feeling like excuses. If I wanted to drop those pounds, I’d have to do what everyone else did: put in the work. I’d watched Oprah. I knew I wasn’t alone.

I hired a trainer and worked my ass off at the gym three times a week. I started doing yoga and signed up for the food delivery service that all the stars supposedly used. After the first 25 pounds, I switched over to Weight Watchers, and it all worked: I lost 50 pounds. I felt like a champ. And that’s where I stayed for three years—until one day, I pulled a hamstring during a Vinyasa class.

That was the beginning of the end. The muscle was constantly irritated and inflamed, no matter what I did. Doctors prescribed physical therapy, but it didn’t help (nor did my insurance cover it). I tried to go back to the gym, but the pain was intolerable. My wonderful workout regime was slipping away from me. Depressed and angry, I turned back to my available anesthetic: food. The weight came back.

One day my friend Shawn mentioned someone with a weight problem who had a band put in.

“A Lap-Band,” he said. “You know, the alternative to the hardcore stomach surgery?”

That was all he had to say. I beat an obsessive track to Google and looked up everything I could about Lap-Band surgery, which I now saw as the answer I’d been looking for. I was back in the 175-pound range, and panicked that I might end up where I’d been a few years earlier. But there was one problem: I was too thin for a Lap-Band, and I didn’t have a high enough body mass index. I called everywhere in New York -- no luck.

I wouldn’t be so easily deterred. This was the answer, damn it! I wanted to be happy and get on with my life and finally love myself because I’d be thin. So instead of listening to the professionals, I plowed ahead with my search. No one was gonna tell me I wasn’t fat enough to get skinny.

I spoke to doctors in London, and they referred me to Dr. Favretty, the guy who invented this surgery. He was Italian, and he and his partner traveled to England twice a month to perform the procedure. Favretty was having success with low-BMI people like me. For $14,000, I could have the surgery. I spoke to my partner about it, and she agreed it was the answer. A month later -- off I went.

The surgery took place in Manchester. When I walked into the waiting room, I noticed that everyone was morbidly obese. They were looking at me as if I’d already had the operation. While the nurses and staff were prepping me for surgery, they shared their own stories of Lap-Band success, which eased my tension, but I was still nervous. Hello! I was in a foreign country, by myself, having surgery!

I woke up with five incisions in my stomach and a lot of pain. The next day I was released and given a strict diet: protein drinks for the next four to six weeks, then mushy food, and after eight weeks I had to come back to England to get the Lap-Band filled in order to restrict the size of my stomach. When I got back to my hotel, the pain was so bad I was hardly able to move. I took the prescribed pain medication, but when I started having the urge to smoke cigarettes and watch porn, I threw it out. That was the first sign of my addiction sticking its tongue in my ear.

When I went back home, my partner and I made a secrecy pact: No one would ever know about the surgery. I was so ashamed at “taking the easy way out” (or so I thought) that I lied about why I was in England. I told tales about going there for work and pitching my new script to a production company. It sounded glamorous, and because of my lifestyle (writer/director of two films) no one questioned me. But I was embarrassed by the lengths I’d gone to to spin this tale. It’s the secrets that keep you sick.

For the next four weeks, I was on a liquid diet and lost about 10 pounds. Because our social life revolved around food, I told people I’d had oral surgery and couldn’t chew anything. I drank everything and food processed everything else. In retrospect, if I had just done that liquid diet I would’ve lost the same amount of weight. Still, I felt good and was looking like the girl I’d been about a year earlier.

When I moved to solid foods, however, the situation got tricky. All the things I liked -- all the things I could keep down -- were high-calorie foods. Ice cream, and cookies soaked in tea, and bisque, and mashed potatoes. It was hard for me to eat any protein, let alone vegetables. Every time I tried to eat broccoli or carrots or anything healthy I used to enjoy, it would get caught in my throat and hurt so badly that I would race to the bathroom to puke.

This wasn’t good for my body, but it was especially bad for my mind. The surgery should have simplified my relationship to food; instead I thought about it 24/7. I questioned everything I had ever learned about positive eating habits. At the hospital I’d been told not to eat in the morning. Huh? I thought that was the most important meal of the day? Not when you have a Lap-Band, as it turns out. It’s at its tightest in the morning so you can’t put anything in without having it come back up. It had taken me 46 years to learn the rules of healthy living, and now I’d gone and changed them. What had I done?

Between weeks six and eight I put all the weight back on that I’d lost, plus a few extra pounds. I was beside myself with fear, shame and guilt, all while still keeping the surgery a secret. I went back to Manchester to see the doctors and have my first band adjustment, which means they fill the thing with saline to limit food intake into your stomach, which basically means anything that doesn’t fit through the little hole backs up into your throat and you either puke it up or choke on it. Even water has a hard time getting through.

I tried to ask all the right questions and even went to a support meeting at the hospital. Go with it, I kept telling myself, it’s helping all these other people, surely it will help me! But nothing eased the fear that I’d made a huge mistake. They gave me my first adjustment, put me on another liquid diet, and sent me on my way. Back to New York I went with a referral for aftercare and future adjustments.

On my return, I gained even more weight. Frustrated and at a loss, I went to the NYU Bariatric Center, where I met with my aftercare doctor. He himself had had the Lap-Band procedure done and was very optimistic that it would work for me. He said the band needed more fluid in order to work for me. You see, what I eventually found out is that the surgery works for the morbidly obese because no matter how high their calorie intake with the Lap-Band, it’s still less than they’re used to having. As for me, prior to the surgery I ate very healthy, just too much; but the surgery no longer allowed me to eat those healthy foods — like chicken, grains and broccoli — because they were too high in fiber to go down. Instead, I turned to pudding and macaroni — so of course I gained weight.

After the doctor put more fluid in the band, I could hardly breathe, much less eat or drink. I had to go back and have it let out again. The doctor kept telling me there was a comfort zone, a sweet spot, but after at least 15 trips to the clinic and months of not being able to lie down flat in my bed and sleep because my own saliva would choke me, I’d had enough. I had hit rock bottom with this thing: I weighed over 185 pounds, couldn’t sleep, couldn’t eat the things I liked and my body needed, and was so depressed that I had to go see my old shrink and get back on antidepressants.

I could get sober, but I couldn’t conquer this? I had to give up the hope of a quick fix: I mean, if you could pay to be thin, wouldn’t all rich people do it? But I knew the weight, like the drugs, was an inside job.

I kept talking to my therapist about why I felt the need to keep this secret. I mean, I’m a recovering drug addict who used to shoot cocaine and heroin intravenously and I’m not ashamed of that — how could I be so ashamed of this? Where did this self-loathing come from? I really needed to get to the bottom of these feelings. At the same time, I was taking a more pragmatic approach to the band. I joined Weight Watchers again. I had started utilizing it in a way that I was comfortable with, working around its limitations. When I made the decision not to be a victim of the Lap-Band but to take control, things got much better. I got much better. Now, I’ve learned to use all the tools that are at my disposal. I’m a steady 155 pounds, give or take a few (which I don’t fret about anymore). The band has definitely helped me, and gentle forms of exercise have kept me healthy.

I took a chance and told my sister about the surgery that summer. She didn’t judge me, and neither did the people I told afterward. In fact, the more I discussed it, the more I was able to accept it as well.

If I had to do it all over again, would I still spend my money on this? Probably, because my obsession with my weight and body image are much deeper than the money, and I feel great in my skin right now. But when I finally opened up about my struggles -- that’s when I felt the real weight lift.

Rayya Elias was born in Aleppo Syria in 1960. Her family moved to Detroit in late 1967. She is an author, musician, and filmmaker. Her book “Harley Loco: A Memoir of Hard Living, Hair, and Post Punk, from the Middle East to the Lower East Side” was published by Viking in April 2013. She has a Huffington Post blog. She lives in New  York City.