Heinz Kerry was hospitalized after showing symptoms consistent with a seizure, according to an AP source 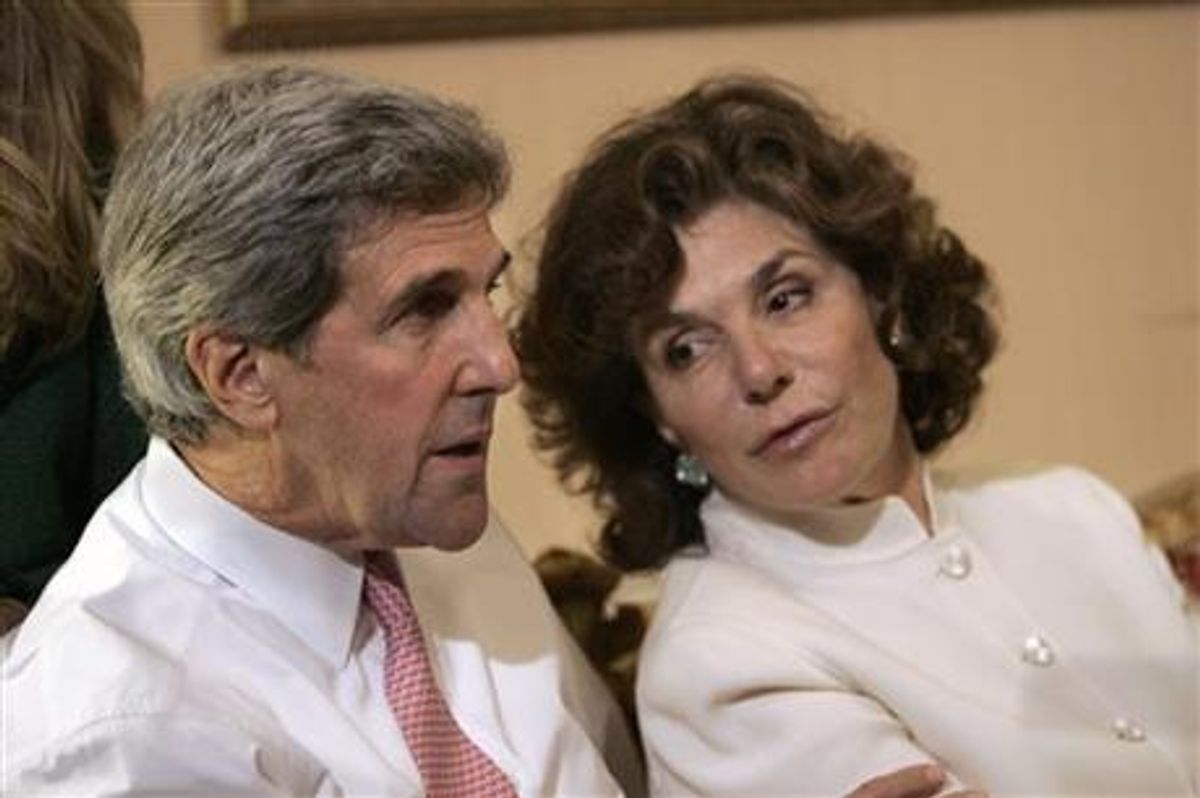 BOSTON (AP) — Teresa Heinz Kerry, the wife of U.S. Secretary of State John Kerry and heir to a ketchup company fortune, was hospitalized in critical but stable condition Monday, a day after showing symptoms consistent with a seizure, a person in close contact with the family said.

Heinz Kerry was flown to Massachusetts General Hospital in Boston on Sunday night after doctors at a hospital on Massachusetts' Nantucket Island stabilized her, said Glen Johnson, a spokesman for Kerry. The secretary of state was with his 74-year-old wife as an ambulance first transported her to the island hospital, and also during her transfer to the Boston facility.

A spokesman for Nantucket Cottage Hospital said Heinz Kerry arrived in critical condition, although doctors were able to stabilize her.

Family members saw her exhibiting symptoms consistent with some sort of seizure, said the person in contact with the family, who spoke to The Associated Press on condition of anonymity because the person was not authorized to speak publicly about Heinz Kerry's condition. She was being evaluated by physicians on Monday morning, the person said.

She previously said she found out in September 2009 that she had cancer in her left breast after having her annual mammogram.

A month later, she underwent lumpectomies on both breasts at a Washington hospital after doctors also discovered what they thought was a benign growth on her right breast.

That diagnosis was initially confirmed in postoperative pathology, but two other doctors later found it to be malignant.

In November 2009, Heinz Kerry had another pair of lumpectomies performed at Massachusetts General Hospital.

On Sunday, shortly after 3:30 p.m., emergency officials on Nantucket got a call requesting medical aid at a home on Hulbert Avenue and dispatched an ambulance there, Nantucket Police Lt. Jerry Adams said. Online records show the property is connected to Heinz Kerry's family.

Heinz Kerry is the widow of former U.S. Sen. John Heinz and heir to the Heinz ketchup fortune. Heinz died in April 1991 when a helicopter collided with a plane over a schoolyard in Merion, Pa. The senator was among seven people, including two children, who died in the crash.

She enthusiastically participated in her husband's campaign for president in 2004 and became known for her strong opinions, sometimes attracting as much attention as the candidate.

Before Sunday's emergency, John Kerry had been at the Nantucket home since returning from a nearly two-week, around-the-world diplomatic trip to the Mideast and Southeast Asia in the pre-dawn hours of July 3.

Before his wife's medical problem, he had planned to return to Washington on Monday and then co-host with Treasury Secretary Jack Lew high-level strategic and economic talks with senior Chinese officials on Wednesday and Thursday.

Kerry had also spoken of his desire to make his sixth trip to Israel as secretary starting at the end of the week. State Department officials said Kerry's schedule may now change pending developments with his wife's health.