Texas political battle is about more than abortion 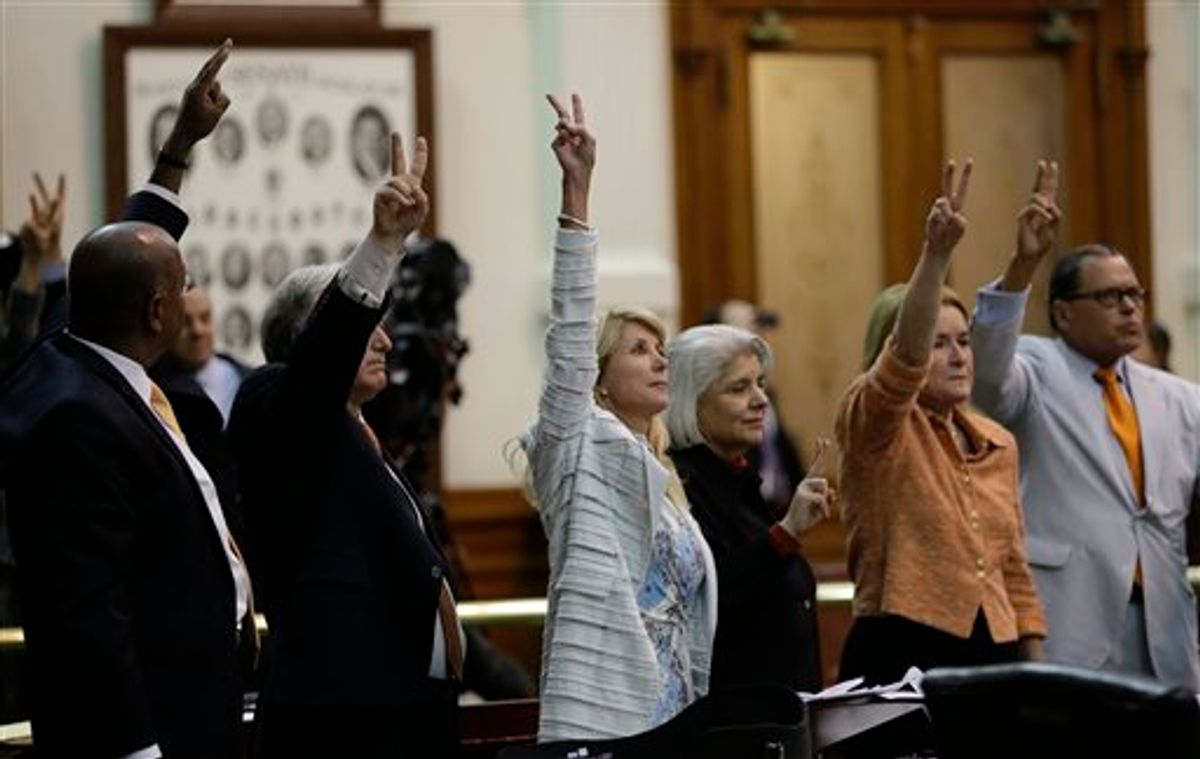 Sen. Wendy Davis, D-Fort Worth, center, who tries to filibuster an abortion bill, hold up a no vote as time expires, Wednesday, June 26, 2013, in Austin, Texas. (AP Photo/Eric Gay)
--

State Sen. Sylvia Garcia, D-Houston, knows what's at stake if her conservative colleagues prevail and pass the sweeping antiabortion omnibus measure currently being debated in the state Legislature -- and it's more than just abortion rights in Texas.

As Garcia notes in an editorial for the Houston Chronicle, in addition to effectively banning abortion in the state, SB 1 would be equally devastating for women -- and men -- seeking a litany of other vital health services:

These clinics [that would be shuttered by SB 1] provide live-saving cancer screenings for men and women, breast exams, pap smears, pelvic exams, test and treatments for sexually transmitted infections, blood pressure and diabetes screenings in addition to reproductive care and family planning services.

The legislation sponsored by Sen. Glenn Hegar, R-Katy, and pushed by Gov. Rick Perry and Lt. Gov. Dewhurst is purportedly to improve women's health care for abortion services. For the record, let's review the current conditions of women's health care under their leadership.

Currently, 31 percent of women in Texas are uninsured.

An estimated 130,000 women are going without basic preventative health care due to health care funding cuts in the 2011 legislative session.

As Salon has previously reported, SB 1 isn't the first time state lawmakers have undermined women's access to necessary healthcare, though it does threaten to make what is already a bad situation for too many women in Texas much, much worse:

According to data from the Guttmacher Institute, close to 90 percent of Texas women live in a county without an abortion clinic. The antiabortion omnibus measure currently being debated during a second special legislative session could shutter 37 of the state’s 42 clinics, leaving the women of the second most populous state in the country without meaningful access to basic reproductive health services and abortion care...

And while Texas’ current battle over reproductive rights has grabbed unprecedented national attention, this isn’t the state’s first rodeo. During the 2011 legislative session, Texas lawmakers passed a two-year budget cutting $73 million from family planning programs. In 2012, Gov. Rick Perry dissolved the state’s partnership with the federal Women’s Health Program and forfeited millions in Medicaid funding for low-income women’s healthcare. Republican lawmakers were unabashed about the reasoning behind such extreme measures, which was, as state Rep. Bill Zedler, R-Arlington, openly acknowledged, to “defund the ‘abortion industry.”