From "The Newsroom" to "Game of Thrones," the high- and lowlights HBO opening titles 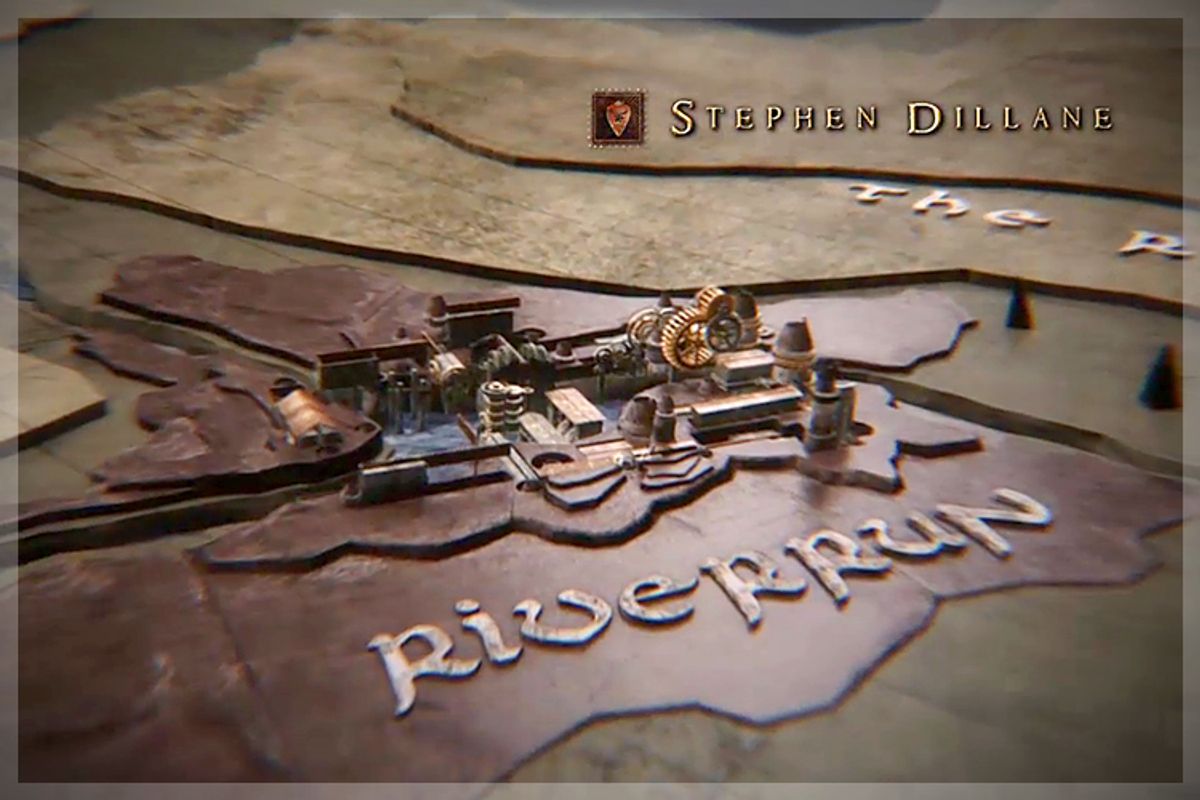 HBO puts a great deal of effort into its credit sequences -- sometimes, it seems, more than into its shows. Good or bad, the first 15 to 90 seconds of practically every series on the "not TV" network feels like the product of a great deal of effort -- compare even a lesser HBO effort to the aesthetically wretched "Mad Men" opening (yeah, we said it) and the difference is clear. (Even the shows lacking credits sequences, like "Girls" and "The Comeback," feel like the products of a clear aesthetic choice, not mere laziness.)

As we wait for a new season of "The Newsroom" with what is said to be a new opening, one featuring someone marking up the New York Times with a highlighter (is it 1955 again, so soon?), we're commemorating credits sequences past and present -- from the glum raunch of "True Blood" to Carrie getting splashed by the bus every Sunday night in the early 2000s. Below, a selection of said sequences in ascending order of quality:

This show began in 1990, long before HBO’s halcyon days. #itgetsbetter

Impossible to believe this weird, quasi-misogynistic thing is real!

Like “The Newsroom,” this sequence pretty effectively summarizes the tone of the show; this one traffics in a sort of Southern-Gothic raunch that has little interest to this reporter. A fox decaying in time-lapse? Smoke being exhaled from a lipsticked mouth -- in reverse?! It all feels calculated.

Very film school, third semester. I think it’s the neon sign reading “Luck” that tips this into comedy -- that or the tumbling jokers. There’s such a fine line between intriguing symbolism and laughable, hackneyed kids’ stuff!

The shots of hustlers in the streets and the rousing song about just needing a dollar all lead into a show about people trying to become fashion designers and also energy-drink salesmen. This show was tonally very weird.

I feel no closer to deducing what “Angry Boys” is about after having seen this.

It is just wonderful that HBO has allowed this show to exist and that’s all we feel the need to say.

These guys seem noxious even when just driving a car. OH YEAH!

The jaunty-song, grim-imagery thing was done to lesser effect in “Treme,” too, but “The Wire” gets a bump because at least the visuals cohere to a theme.

Cartoon Ricky Gervais is much more charming than his corporeal form.

A little on the nose!

Perfectly fine and economical, but given how pathbreaking the show was, the image of flowing water and customer-service-on-hold Muzak is kind of a silly way to start the episode.

You’re sitting there, having just seen Tony Soprano get shot in a diner -- or not. You’re trying to metabolize it -- and then this file-footage pastiche comes on. Did anyone, anywhere think “John From Cincinnati” would be a hit?

The “words in books become characters!” device is kind of silly, but there’s a “Mystery!” sort of charm to the animated figures.

Economically gives you everything that happened before the show in a series of headlines. But, as the show’s moved on from Selina Meyer’s past ambitions into her plans for the future (and as we learn more about her not-quite-presidential caliber), it seems less and less plausible that she was ever a presidential front-runner -- and more and more random that we’re reminded of it. Also: “Selina ‘Proud’ to Be Veep” is a terrible headline.

Of a piece with the latter-day “Big Love” credits (to be discussed!) in that it’s far more contemporary and edgy than the characters of the show are, or than the fusty-ish show is itself.

Thirteenth seems like a good place for this cute little vignette, why not?

The tattoo is strongly identified with the show, and with good reason, but to pick the very nits this piece exists to pick, the white letterbox effect is deeply tacky and strange.

The dancing animated figures worked OK for “Bored to Death” and they work slightly less well here, thematically. But while both seem like sort of a last-ditch idea, unlike “Bored to Death’s" these credits look like the product of lots of time and money, the magic things HBO provides that other networks don’t or can’t.

The decontextualized-pieces-of-a-certain-milieu thing is something HBO does a lot -- little vignettes from prison in the “Oz” theme or New Orleans on “Treme” or, here, whiskey pouring and gold dust sprinkling. It’s fine, but feels a little “Dr. Quinn, Medicine Woman” in parts.

The grotesques on display here are a perfect litmus test; if you can stomach them, you’ll really like the show!

The opening credits for the majority of the show’s run were ironic in just the right way, and managed to convey the characters’ belief in their own innocence and purity. Past the halfway point of the show’s run, the credits switched, and though it made sense (they were all undergoing a spiritual crisis) the whole thing felt way too slick for a show about a Utahan home-goods salesman and his three wives. If your show doesn’t include innovative camera angles, your opening credits sequence probably shouldn’t either? Downgrade.

Visually rich, if utterly confounding in a way that would predict the show’s own miasma of references and themes.

A little florid, but in a way that absolutely works. A lot of love went into this -- unlike the equally overzealous “True Blood” credit, which plays like a focus group’s responses to the question “What do you find edgy?”

We'll miss this when it's gone.  But this sequence, placing the fictional Will McAvoy in a tradition with the great TV newsmen, is both maddening and a perfect distillation of the show’s tone. It’s brilliant, if you can stomach it!

It’s so strongly identified with the show -- and so enduring, even to those who never watched -- that it transcends good or bad taste. The slow downward pan, finally revealing this normal-seeming woman is wearing a white tutu, is one of the great reveals in TV history, even if it happened nearly 100 times.

Just like “Sex and the City,” there’s little to add. This so narrowly avoids being on-the-nose -- can you imagine if they’d used a Bruce song?

What more is there to say? These combine rousing music and visuals of a three-dimensional map for newbie fans with almost obnoxiously detailed alterations for the obsessives (the credits change every episode to depict the locations dealt with). If the show had put half as much effort into accents as into the credits, this would be TV’s best show of all time, probably.