With his Superman abs and non-sexual love song, Steve Grand may be nonthreatening enough to break through 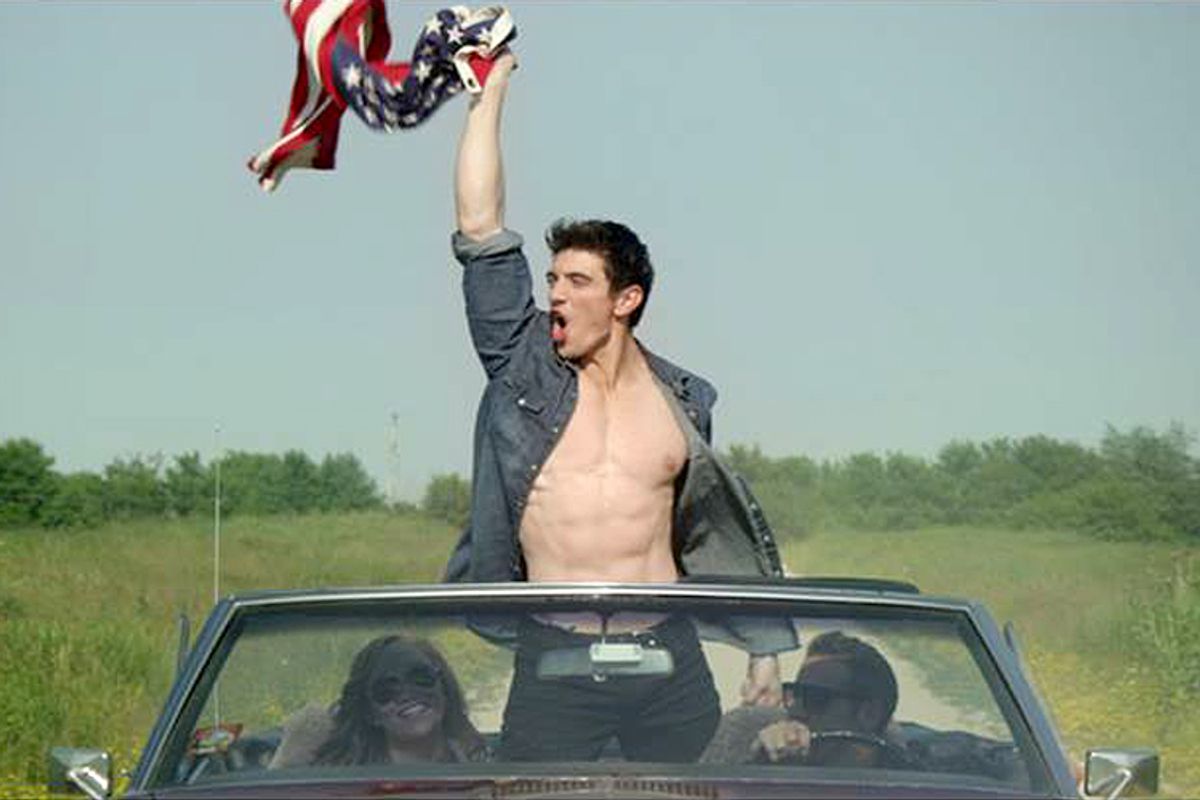 Country singers may be able to break out of the mold a little -- think Taylor Swift's aggressively poppy songs, or Dolly Parton's outsize image -- but generally, the most successful don't rock the boat too much.

Steve Grand is hoping to change that.

Grand, an unsigned singer, recently released the video for his song "All-American Boy," a song whose title comes with a tinge of irony. The aspirant to Tim McGraw's throne is openly gay, and singing about his desire for another man.

Nashville either will or will not be ready, but Grand has already met with success of a sort -- his self-financed video, posted on July 2 (just in time for the Fourth!), has garnered more than 650,000 views as of this writing. He's been the subject of two features on BuzzFeed, both of which included adoring close-ups of Grand's Olympic-or-Marvel-movie-caliber physique (in some ways, this aspiring superstar coheres closely to the mold).

Grand isn't the first gay country singer by any means. One Drake Jensen has put out three albums since 2011, though his bearish physique isn't winning him any fans among the BuzzFeed set. And Chely Wright, a Nashville lifer, came out of the closet in 2010, though her album sales suffered after that.

Howard Bragman, the P.R. guru who ushered Wright through the coming-out process and is the vice-chairman of reputation.com, told Salon that Wright had used a "shock-and-awe" media campaign to win over potential new gay fans, knowing that country listeners might tune her out after that. "I don't think a country singer could have gotten more attention than Chely did" -- with a simultaneous People magazine feature, "Today" appearance, book and album release. "And still, Chely wasn't doing the numbers she had done previously." (Bragman added that, now married with children, Wright is happier than she was when closeted.)

"I'm proud of this man that he's followed his heart," said Bragman. "But he needs to know that 400,000 hits on YouTube does not a career make."

In other words, Grand -- despite his talent and, yes, marketable look -- could become a gay version of Rebecca Black or Tay Zonday, a Web-ready novelty act that doesn't put the pieces of superstardom together. Nadine Hubbs, a professor of women's studies and music at the University of Michigan and the author of the forthcoming "Rednecks, Queers, and Country Music," noted: "We have to take the country music industry into account. Top 40 country radio is the narrowest pool of songs in the music industry. You're literally only going to hear 40 songs. There is no other radio format like that." Consider the Dixie Chicks' effective career collapse in the immediate wake of their declaration that they were embarrassed by George W. Bush -- country radio's blackballing did commercial damage the group never really recovered from, Grammys aside.

If any gay star was going to get past the gatekeepers, though, Grand might be it. "We can start at the fact that it doesn't have steel guitar or fiddles in it," said Hubbs. "As Shania Twain and [her one-time producer and husband] Mutt Lange knew, that is the formula for crossing over." Furthermore, the video depicts a wistful flirtation, but not a torrid affair, and Grand is left alone at the end. It's not even clear that anything happened, except in Grand's mind -- the video's fairly clear about the fact that his love interest has a girlfriend. It's safe for those audiences for whom the mega-hit "Brokeback Mountain" (with its ads highlighting the film's all-American values) was a completely acceptable gay tragedy but for whom a gay romance is still a little edgy.

"A beautiful, lonely, brooding gay boy with a straight guy who dips a toe in the water but doesn't fully go there and leaves the gay guy daydreaming and fantasizing about brief moments of ecstasy -- it's loaded with crossover appeal!" said Hubbs. "There are so many straight teenage girls who are going to be crushing on him."

And Grand may have some allies on Music Row, as well. Up-and-comer Kacey Musgraves has a song on her recent album urging the listener to "Kiss lots of boys / Or kiss lots of girls / If that's something you're into" while Miranda Lambert's most recent album opened with a song about the different strokes it takes to move the world, including cross-dressing. We're a long way from Folsom Prison.

Nashville executives, said Baron Lane, a blogger for country music site Twang Nation, "tend to vote if not Democratic, then Libertarian. They don't have an agenda as an industry other than what the market dictates. As the nation opens up, then so will Music Row." And Music Row, fueled by the crossover success of the likes of "The Voice" judge Blake Shelton and, yes, Ms. Swift, is in one of its periods of openness, as when Patsy Cline broke through to the mainstream with the "Nashville sound": It may be more accepting than ever of something new with proven viral success.

Besides, said Lane, the matter of gay people in country music hasn't been tested much yet: "When [Chely Wright] came out, her career was on the decline anyway. I think she does attribute some of her declining sales to coming out, but it just happened to coincide. I don't know how many doors shut because she came out or because she wasn't having hits." He added that the Dixie Chicks' statement was wildly unpopular at a time when the nation was generally in support of Bush, while the tide is turning in favor of gay rights. When it comes to Grand's prospects, if Nashville "can make hay out of it, they're certainly going to."

"Fats Domino once told Mick Jagger, Make sure you never pronounce the words too clearly. Fans like the mystery. Ambiguity is essential," said Hubbs, the professor of music. If Swift can wink and nod at past relationships in her videos, there's no empirical reason that Grand's innuendo-packed but sex-free video ("set in the verdant Midwest, full of crops," per Hubbs) couldn't make a wise country music A&R rep a lot of money.

For all the potential and all that remains to be seen, though, Grand has at least guaranteed himself a future as a pinup on a certain segment of the Internet. Said Bragman, the P.R. executive: "Lord knows the gay community loves attractive people on YouTube."