Congress is increasingly using "quiet time" and Buddhist teachings to inform its approach to politics. Here's how 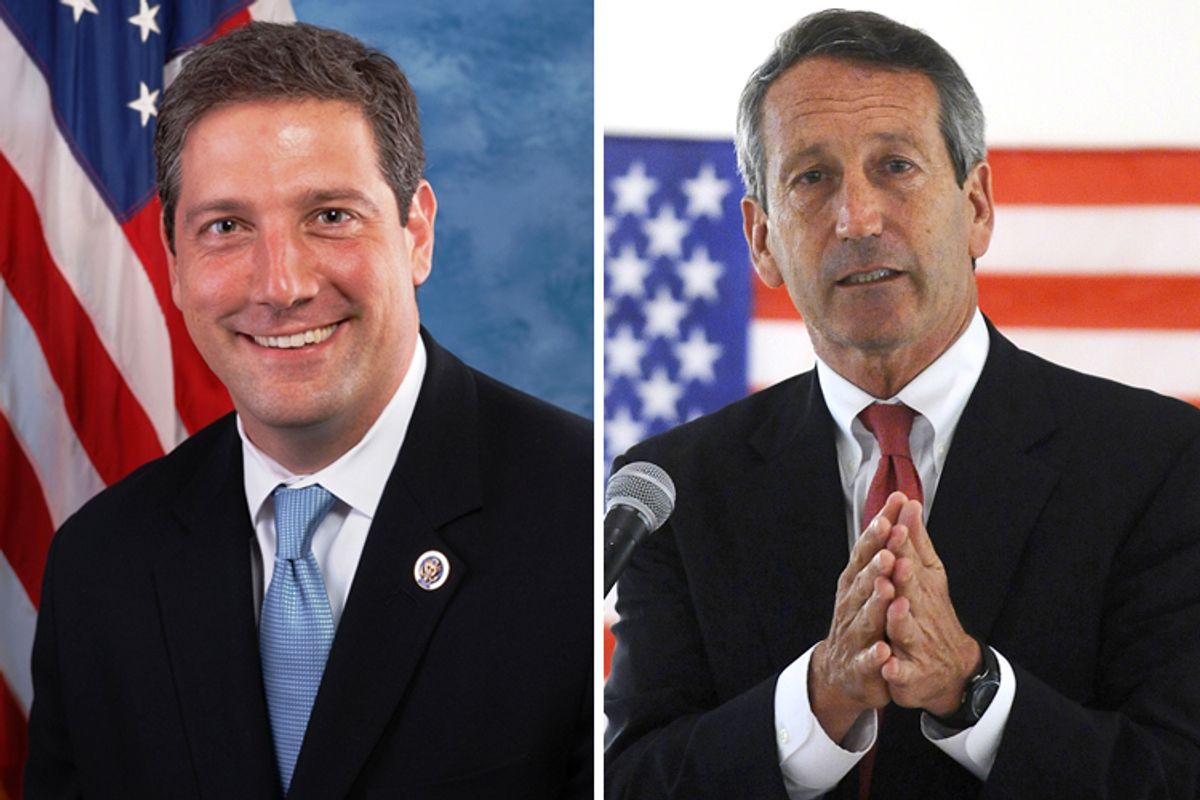 "If this can help me, a half-Irish, half-Italian quarterback from Northeast Ohio, it’s for everybody," Congressman Tim Ryan says of his meditation practice developed from Buddhist traditions. The lawmaker, one of a growing group of prominent politicians incorporating mindfulness into their worldview and approach, leans back in a chair in his Longworth House Office Building suite, which includes meditation cushions and signed footballs -- and even a Bud Light on display behind glass (the aluminum bottle is made in his district). "It’s not woo woo!"

Despite not fitting the profile, Ryan has become an evangelist for meditation on Capitol Hill, encouraging his fellow lawmakers to try it, securing federal funding for a pilot meditation program at schools in his district, and even writing a book -- A Mindful Nation: How a Simple Practice Can Help Us Reduce Stress, Improve Performance, and Recapture the American Spirit -- on how he sees mindfulness as a cure to the stress of modern life, and something that can help heal Congress and the world. He's even landed on the cover of Mindful magazine. And he's not alone.

This year saw gains for bona fide Buddhists, with Mazie Hirono becoming the first to enter the Senate in history, and with fellow Buddhist Hawaiian Colleen Hanabusa in the House. And from New York Attorney General Eric Schneiderman, to health-conscious Bill Clinton, to redeemed Southern Republican lawmaker Mark Sanford, a growing number of politicians and the people they employ are getting turned on to the benefits of meditation, in general.

"If more people meditiated, we probably would have less arguing, less animus, physically, mentally, and legislatively, and we'd probably have a lot more effective legislation because people would be coming from a much more balanced place when they're doing their jobs as legislators," said Los Angeles Democratic Rep. Tony Cardenas, who has been meditating twice a day for a little over a year (at least when his schedule allows).

Tara Brach, a prominent Buddhist meditation teacher who has led workshops organized by Ryan, agreed. "It's happening all over the country, so it's really natural that's in happening where our leaders are working," she told Salon. "It seems so importnat in a place like Capitol Hill, where our nation's leaders are needing to be responding with as much wisdom as possible."

Every week, Ryan hosts the Quiet Time Caucus, an informal 30-minute moment of silence held in the Speaker's Chapel. Lawmakers can meditate, do a Christian prayer like the centering prayer, or just sit there quietly. "Members of Congress never have a moment to just be quiet, from the moment they get up in the morning when they turn on Morning Joe or whatever, to meetings and votes all day, to the moment they fall asleep, often with the TV on," Ryan said. Quiet Time started with Ryan by himself, then a couple of colleagues trickled in, and now there are about six or seven. His office sends invitations to every other office on the Hill, though so far it's been all Democrats.

But there's one Republican who might be interested. "I've tried to be disciplined about a quiet time each day," Mark Sanford, the disgraced South Carolina governor cum redeemed congressman told Yahoo's Chris Moody in May. During his time in the wilderness, after being forced to resign from office when he was caught carrying on an intercontinental affair, Sanford found Buddhism and started meditating every day. "A buddy of mine said, 'Mark, you're becoming a Buddhist Christian.' I come from the Christian faith. That's my faith tradition. But what I do like about Buddhism is the idea of being present," he said between campaign stops.

Ryan gave Sanford his book when the new congressman was sworn in, but so far no word. "For a long time I’ve been looking for an ally on the Republican side,” Ryan said, noting that mindfulness' emphasis on self-reliance and personal improvement should appeal to conservatives.

Someone also seeking solace in meditation was Bob Ney, who left Congress for federal prison on corruption charges in 2006, and then left prison for (after some time) Dharamsala, India, where he has been studying Buddhist meditation in the Dalai Lama's exile base. In an interview with the National Journal from his $10 a night guesthouse in India, he joked about the stereotypes of mediation, but said, "I’m a very lucky person, and I’m just very happy -- very, very happy. I’m doing what I want to do."

In 2009, Danny Fisher, who heads the Buddhist Chaplaincy Program at University of the West in California, wrote for Religion Dispatches that there were no Buddhists in Washington. "Buddhists have been conspicuously absent from many of the administration’s conversations about and efforts around religion in America," he wrote, citing especially the exclusion from a White House advisory panel on faith. That's starting to change. Last summer, President Obama made Miao Hong Hsiangju Liu the first Buddhist on the the President’s Advisory Council of Faith-Based and Neighborhood Partnerships. And with Hanabusa's election to Congress, where she joined fellow Buddhist Rep. Hank Johnson, a Democrat from Georgia, the religion is now represented in closer proportion to their numbers in overall population that Muslims or atheists.

But many people who are not Buddhist adopt its mindfulness practice, and the religion. "Meditation has absolutely nothing to with religion. Some people do it as part of their religion, but it doesn't have to be at all," Cardenas added, explaining that he's a Christian, but that he finds those two parts of his life reinforce each other. For him, its about performance. "It helps me relax and stay focused, and when I'm relaxed and focused I'm more effective at my job as a legislator. In that sense, I find it very very beneficial," he told Salon.

Science has found evidence of all kinds of beneficial effects from meditation, from lowering stress, to improving sleep and brain functioning and even physical health. Recent research reported in the New York Times last week suggests that meditation can even make people more compassionate to each other, something lawmakers could probably use.

Meanwhile, on the other side of the country, Jerry Brown is have a second coming, earning plaudits for helping turn California around. Brown, who earned the nickname "Governor Moonbeam" during his first term in the 1970s, has spoken about his time studying Zen Buddhism in Japan and how his practice shapes his view of politics. "If there were a true religious spirit, we would have to radically change the way politics is conducted," he told Tricycle magazine. "When politicians are talking about religion, if they really had that as the doctrine of their life, they would have to get rid of homelessness and housing projects."

In New York, Attorney General Schneiderman is known to practice Buddhist mediation and is a big proponent of Yoga, sponsoring a bill to help studios as a state senator. A mini Buddha statue sits on his desk.

Meanwhile, Jared Bernstein, who served as Vice President Joe Biden's chief economist adviser and now writes for Salon, among other places, when he's not practicing Buddhist meditation, thinks mindfulness can help explain the world. In a recent talk he gave, he adopted the Four Noble Truths of Buddhism to an economic context, creating the Four Noble Truths of Full Employment. "I’m not trying to be glib here," he said. "I think it is consistent with ethical thinking, good economics, not to mention the values of Buddhism, to equate unemployment and suffering, especially long-term unemployment of which we still have more than any period on record going back to 1940s when that data series begins."

He has another mindfulness-inspired paradigm about how the difference between liberals and conservatives can be understood as the clash between two world views: "You’re on Your Own vs. We’re In This Together."

But where Ryan really hopes to have an impact is outside of the Washington. "To me, this isn’t just about the mindfulness practice, it’s about how do we have a mindful nation?" he says, noting that everyone from corporate CEOS to pro-athletes are now turning to meditation to help them relax, focus, and improve performance. He wants to expand in schools as an an alternative to prescribing drugs like Adderall, and thinks if more people started doing it, it would bring down health costs for employers, insurers and the taxpayers. Even the Marines have a pilot program, which is showing promising results so far.

He's hosted events on mindfulness in his district and been astonished. "I had a guy in the bowling alley in jeans and flannel shirt and a Caterpillar hat come up to me the other day and say he couldn't wait to read my book," Ryan said, delighted. “This was not my target audience!”