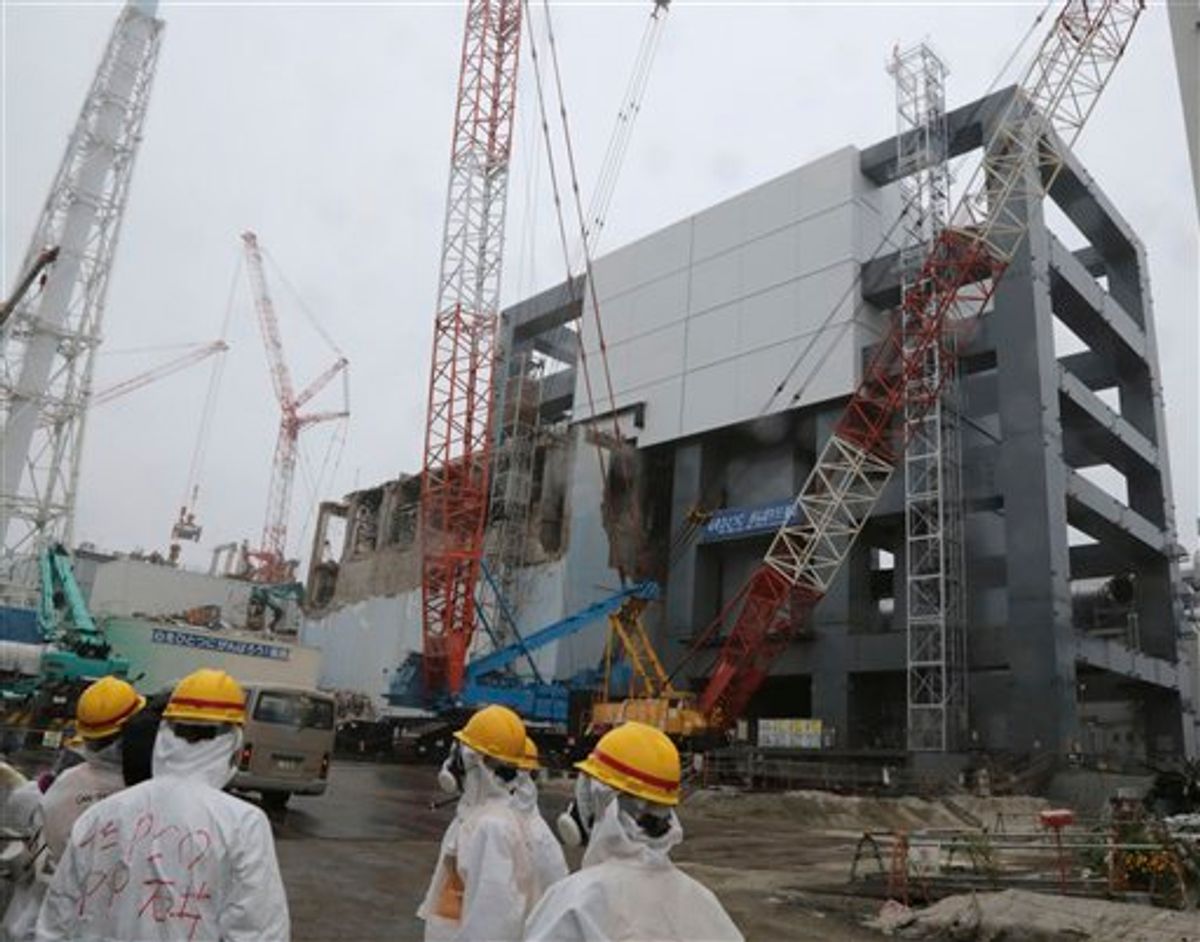 The steel structure for the use of the spent fuel removal from the cooling pool is seen at the Unit 4 of the Fukushima Dai-ichi nuclear plant at Okuma in Fukushima prefecture, Japan, Wednesday, June 12, 2013. (AP Photo/Noboru Hashimto)
--

TOKYO (AP) — Japan's nuclear watchdog said Wednesday that the crippled Fukushima power plant is likely leaking contaminated water into the ocean, a problem long suspected by experts but denied by the plant's operator.

Officials from the Nuclear Regulation Authority said a leak is "strongly suspected" and urged plant operator Tokyo Electric Power Co. to determine where the water may be leaking from and assess the environmental and other risks, including the impact on the food chain. The watchdog said it would form a panel of experts to look into ways to contain the problem.

The watchdog's findings underscore TEPCO's delayed response in dealing with a problem that experts have long said existed.

The Fukushima Dai-ichi plant was ravaged by the March 2011 earthquake and tsunami and has since struggled with leaks of water used to cool the reactors, hampering decommissioning efforts.

Since May, TEPCO has reported spikes in cesium levels in underground water collected from a coastal observation pit, while the water-soluble element strontium showed high levels in seawater samples taken in areas just off the coast of the plant. The company says most of the contamination has been there since the 2011 accident.

TEPCO has said it has detected "no significant impact" on the environment. It says cesium tends to be absorbed in the soil, and denies water contaminated with that element reached the sea.

But the Nuclear Regulation Authority said Wednesday that samples from both the pit water and coastal seawater indicated that contaminated underground water likely had reached the sea.

Watchdog chairman Shunichi Tanaka said he thinks that the seawater contamination has been happening since the accident, but that it was worst early in the crisis.

"What's most important is to minimize the leak to the outside and reduce the impact on the human society," he said.

TEPCO says that it has taken steps to prevent seawater contamination in areas near the plant, but that it is impossible to completely prevent the contamination from spreading into wider areas.

"When something unexpected happens, we can only take stop-gap measures, which shows how unstable Fukushima Dai-ichi still is," Tanaka said. "Given the situation, we can only use the best of our wisdom and do want we can."

Marine biologists have also warned of a possibility of continuous leak of radioactive water into the sea via an underground water system, citing high levels of radioactivity in fish samples taken near the plant.