Confessions of a 40-year-old intern

I used to take care of kids with cancer. Now, in middle age, I'm surrounded by 20-something fashion bloggers 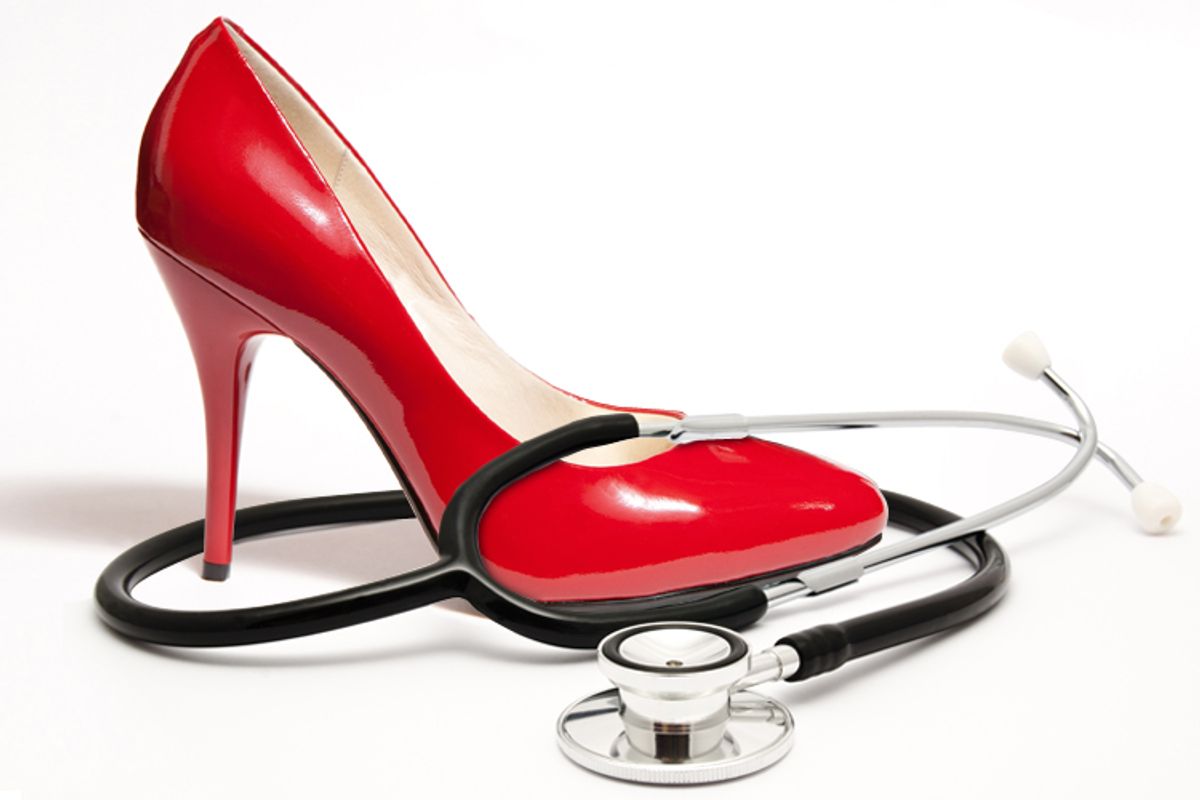 It was fashion week in New York, and my first internship had just started.

"Can anyone do Tory Burch?” asked the assigning editor, as we all sat around planning coverage for the website. “It's at 9 in the morning. I know that sucks."

Actually, it didn’t suck. To me, 9 a.m. was the ideal time for a show. I’d be well-rested and clear-eyed. I was usually up by 6:30 anyway. I explained this to the room, which responded with blank stares. Finally, one of the other girls spoke up. “Cheryl, 6:30 is usually when I go to bed.”

Thus began my first week as a 40-year-old intern.

For more than 15 years, I had taken care of children with cancer, first as a registered nurse and then as a nurse practitioner. I got puked on a lot. I administered countless toxic medications. I watched too many kids die.

But it was the holy grail of nursing: high-tech and high touch, meaning that my brain got a workout, along with my heart. My understanding of physiology was constantly challenged. Cancer is a complex disease, and so is its treatment. But even more complicated was trying to meet the needs of the family as they endured one of the most stressful times in their lives.

I loved my job, and I was good at it. Until I wasn’t anymore.

You need an emotional callus to work in that environment. Nurses can’t go teary-eyed every time they see a frail, bald kid. Families don’t want to be reminded of what they already know: Their situation sucks. I had a callus -- and then I had my own kids. Two boys, now 8 and 10.

After I had them, the stories of sick children became different. I empathized too much. I took on the family’s grief. Losing a child? The most horrific thing I could imagine. I fled hospital family meetings on more than one occasion because I became weepy. I found myself unable to click open lab results from longtime patients, terrified I’d discover a relapse.

I needed a distraction. Some people in the medical field find solace in things like knitting, bird-watching or exercising. Me? I became obsessed with fashion.

I’d always been interested in clothes, but my interest intensified over the last eight years. The clinic let me wear street clothes with my lab coat. I wasn’t saddled with that bane of the nurse’s existence, scrubs. Then, the lab coat was ditched with little pushback from my boss, because lab coats are scary to small kids. Then I started wearing high heels. Black pumps gave way to pink-and-red patent leather (yes, on the same shoe) with vertiginous 4-inch heels. Potentially inappropriate, but they never prevented me from running to a code.

I got sucked into the world of fashion blogging. It had a narcotic pull: I learned about designers, fashion history, all while poring over runway shots on Style.com, and zooming in on bags and shoes. Some nurses hit the morphine stash. I hit the refresh button.

Meanwhile, I joined Twitter and found an outlet for my smart-ass observations. People were responding to me. I met bloggers, and I started taking writing classes to see if I could maintain my voice for more than 140 characters at a time. I blogged for anyone who would take me. I started (and abruptly ended) a few blogs of my own.

Then I saw that one of my favorite fashion news websites was looking for interns.

“Do you realize what interns do?” asked my husband. He works in finance. “They get coffee and food and take a lot of abuse.” They also don’t get paid. This was years before Owen Wilson and Vince Vaughn would turn the idea of middle-aged guys competing alongside fresh-faced kids into a movie called “The Internship.” But you didn’t need a summer comedy to point out the punch line here.

I was contacted for an interview by the editor, Lauren. At 27, she was the oldest person at the site. Later she told me she thought I was “ballsy” for reaching out, but I’m sure she was curious, too: Who is this old mom? I showed up wearing knock-off Balenciaga shoes (talk about ballsy) and after a short interview, I was hired along with another intern, not even old enough to drink yet.

For a while, I split my time between the clinic and the website. It was the weirdest of worlds colliding. My email consisted of pitches for “opportunities” to interview Snooki and notices from the lab saying they lost a stool sample.

But there were other adjustments. I wasn’t technologically savvy, despite the fact that I know how to work an EKG machine. I mean, I didn’t even learn about texting until 2009. So I had to fake my way through using WordPress and how to scan pictures from a magazine. And don’t even talk to me about Photoshop. It’s embarrassing. Generation X may have had the first generation of Apple computers, but some of us have stalled since then. When I told a friend I was interning at a fashion blog, she said, “Wait. What’s a blog again?”

So the job could be humbling. I used to be at the top of my profession, for god’s sake. I published scientific papers! I used to give orders to 23-year-old nurses! Most of my colleagues could have been my daughters, and yet they knew a hell of a lot more than I did. It kicked in new levels of self-doubt: Maybe I was stylish, but could I really talk about fashion in a relatable way to our young audience? Was it bad that I hated overalls, rompers and those shoes that look like smoking slippers even though everyone else in the office loved them?

Few industries are more youth-obsessed than fashion. What was I doing here? Was I completely out of touch?

Usually I was the one self-conscious about my age, making cracks about my impending menopause. But on rare occasions, my co-workers (bless their hearts) managed to underscore it. One time I offered to take minutes at a staff meeting. An editor more than 15 years my junior said, “What are minutes?” to which the executive editor replied, “Oh, that’s an old-timey way of saying, ‘taking notes.’” I felt like a woman who showed up to the meeting with her Palm Pilot.

And the terrain of 20-somethings was a new frontier for me. For years, I’d been hanging out with moms (I was often the youngest one), but my job plunged me into the daily life of the millennial: They stressed about money, yet bought lunch out every single day. When I suggested that buying groceries might be cheaper in the long run, they would tell me things like, “I’m too busy to go grocery shopping!” or “I don’t even know what to buy!” When one of them told me she’d eaten frosting out of a can for breakfast, it was all I could do not to bring in a bag of fresh fruit and yogurt and granola the next day. But I had to check my mothering impulse. It’s a bad idea to baby your colleagues -- especially ones who can fire you.

But I did start to talk like them. When you spend all day with younger people, you can’t help picking up some of their mannerisms. And so I began peppering my language with that form of abbreviated text-speak so common to the younger generation, like saying “perf” instead of “perfect” and “whatevs” instead of “whatever.” I draw the line at “adorbs.” As in, “Those overalls are totes adorbs on you!” It’s one thing to blend in to your environment; it’s another thing to become a satire of yourself.

A few months into my internship, New York state tightened up its internship guidelines, which meant that interns either needed to get paid or earn college credit. I was kept on staff as a freelancer and eventually hired as a full-time editor. I quit my nursing job and hung up my stethoscope forever, much to the confusion of my former colleagues.

“Wait, what? You’re going to write about fashion?” said my medical director when I told him I was leaving. Yep, and I haven’t once looked back. Since then, I’ve attended the Olympics, dyed my hair pink for a story (at least that’s what I said), and interviewed the costume designer for “Game of Thrones,” with which I’m obsessed. Sometimes I feel the tiniest bit sheepish about leaving the “noble” profession for such a superficial gig, and I remind myself that I wasn’t doing right by my patients anymore. If you’ve become bored, and disaffected with your career, you aren’t helping anyone. You certainly aren’t helping yourself.

And this “superficial” career has helped me. A shy person, I’ve learned how to approach power players, even when it took every ounce of my courage. Interviewing strangers taught me skills to better communicate with people in my own life. (I still haven’t found the gumption to approach Vogue’s Anna Wintour, though I did once hand back her BlackBerry after she dropped it at a fashion show in London. Career highlight.) And the writing stretched my creativity. You try thinking of new and interesting ways to write about mascara. I’m proud of my efforts, even if the Pulitzer committee won’t be rewarding them.

I’m proud of how much I’ve learned. A recent critique from my editor went something like, “Cheryl, you write like Yoda sometimes” (true it is). But the process has made me realize that I’m teachable rather than intractable.

These days, I’m at another crossroads. I’m considering going back to grad school. My 8-year-old recently said, “College? Aren’t you going to be the oldest one there?”