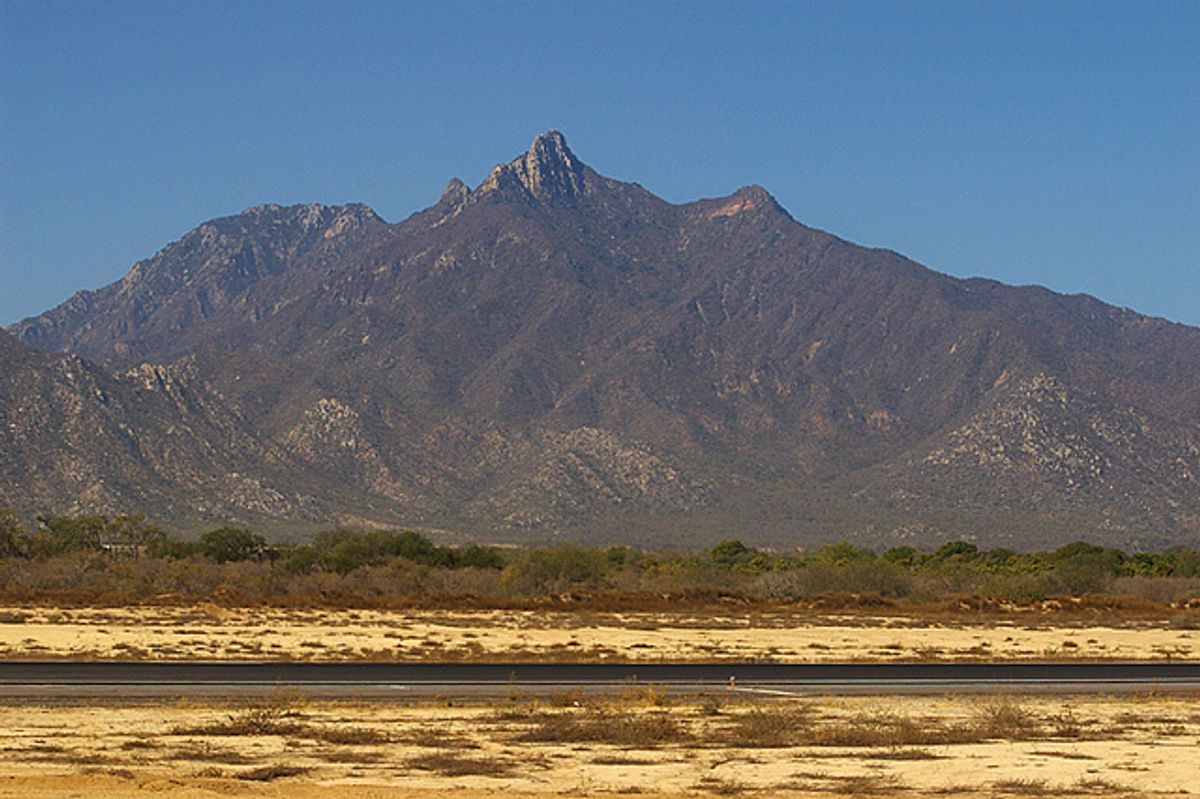 An estimated 1.7 million ounces of gold, worth more than $2 billion, are embedded in Mexico's Sierra la Laguna mountain. (Vlad Litvinov/Flickr)
--

Raul Manriquez drops a pebble in a hole in the ground. We count the seconds until we hear the impact: eight. “This exploration hole is about 700 feet deep,” he estimates. There are 588 more holes around us in the Sierra la Laguna mountain in Mexico. We are standing on top of what could soon be a gold mine: an estimated 1.7 million ounces of gold worth more than $2 billion are embedded in the rocks under our feet. If state officials in Baja California Sur approve the project, the hills we are standing on will be turned inside out and become one vast open pit mine.

The mine is great news for the 900 residents of the nearby mining villages of San Antonio and El Triunfo. Argonaut Gold, a Canadian publicly traded company behind the project, says it plans to employ 350 people in its decade-long project, promising that most of them will be local. “We are a mining village,” one resident says. “If there are no mines, what are we going to do?”

Manriquez, a native of San Antonio, was employed in the exploration stage of the project and has been working with mining companies in the region for the last 8 years. He is also convinced the mine will be beneficial for the region: “As long as the mine meets the standards set by the Ministry of Environment and Natural Resources, it’s a good type of development.”

But other nearby residents are skeptical. Enrique Rochin, a native of the nearby farming community of Los Planes and director of the local organization In Defense of the Environment and Sustainable Rural Development, says that most of the area’s 6,000 people make a living from agriculture. “We can live without gold,” Rochin says, “but not without water.”

Agriculture is the number one income-generating activity in the region, which is a bit off the tourist track. Much of the food grown in the area goes north, to the United States. According to the State Secretary of Agriculture and Cattle Ranching, 88 farms in Baja California Sur export agricultural produce. Most of those are certified organic. Local farmers worry that the mine will contaminate their irrigation water and perhaps even their crops.

Enrique Mendoza, a local landowner and agricultural producer says: “Why don’t we develop tourism and agriculture instead of mining?” He explains that during the growing season he employs 400 people on his land every day. “Indefinitely,” he proudly adds. “We stand to loose so much,” his 19-year old daughter fervently agrees. “We are not willing to take this risk,” she says.

The gold deposits found in Sierra la Laguna are bound to arsenic — a heavy metal naturally occurring in the rocks. Once the gold is extracted, there is a risk the exposed arsenic will seep down into the ground water. The aquifers below this mountainous region provide drinking and irrigation water to most of the people in the arid state of Baja California Sur.

Argonaut Gold is proposing to create an open pit gold mine. If the project goes through, the company will dig out 200 million tons of rock during the next decade; several hills in the mountain range will be all-but-destroyed. Roughly a quarter of this mass will be processed with a cyanide solution to extract the gold and the leftover material will then be stored in a large hole in the ground lined with plastic. The remaining 150 million tons will be piled up as new hills, unconfined and open to the elements.

Jorge Díaz, general manager for the Argonaut project, says that the risk of failure in the plastic lining is “very, very, very low, a bunch of zeros,” and that the waste is safe to leave unconfined because it does not contain arsenic.

Dr. Janette Murillo — lead investigator on arsenic contamination and a marine geology professor at the Center for Interdisciplinary Marine Science — disagrees. She says that in this region rocks that contain gold are also rich in arsenic, antimony, cadmium, cobalt, zinc, lead, mercury, and copper.These heavy metals and metaloids gradually get released in the soil and water as the rocks undergo erosion. Mining activities intensify this process by crushing and heating up the rocks. “In the areas where they want to mine, it is impossible to extract the gold without releasing the arsenic naturally occurring in the rocks,” Murillo says.

The state of Baja California Sur, like much of Mexico, has a long history of mining. The first gold mines in the region were dug 200 years ago. Today, the legacy of those mines is still obvious — about 800,000 tons of mining waste piled up as artificial hills throughout the peninsula. By comparison, the new open pit mine would produce an equal amount of waste every 20 days — for the next 10 years. In other words, the area landscape will be completely transformed.

Beyond aesthetic considerations, the number one concern of local residents involves the possible risks to their water supply.

In 2010, the Mexican Geological Service analyzed water samples collected from 80 wells around San Antonio and the adjacent agricultural region of Los Planes. The tests showed that almost half of the wells have arsenic contamination level above the permissible limit for potable water in Mexico, which is 25 parts per billion (ppb). By comparison, the World Health Organization and the US national drinking water standards are 10 ppb. Murillo explains that the major source of these high levels of arsenic is the arsenolite — a highly soluble mineral within the old mining waste that drains along the San Antonio stream and spreads into the Los Planes valley sediments and ground water.

High levels of arsenic in the wells were previously reported in 2003 by the Mexican National Water Commission. The state government responded by installing water purification plants in Los Planes and San Antonio, which use reverse osmosis to remove the arsenic from drinking water.

The contaminated wells, however, are neither marked nor decommissioned. They are still being used to supply water to homes and agricultural fields. A water sample collected from a Los Planes resident’s tap specially for this article and tested in the arsenic lab in University of California Berkeley showed 53 ppb arsenic — more than twice the concentration of arsenic allowed under the Mexican government’s standard.

A new study by Murillo and Dr. Carlos Colin, an internal medicine physician in the State Secretary of Health, found arsenic in the urine of people from the areas. The report will be published in the international Journal of Geochemistry and Health later this year.

Drinking water is not the only problem with the arsenic contamination. The water from this aquifer is used also for agricultural irrigation and water for cattle. Los Planes is one of the major agricultural regions in the state. The farms produce tomatoes, onions, cucumbers, culinary herbs, corn, asparagus, as well as dairy cows and meat cattle.

Different plants accumulate arsenic in different ways, so it is unclear how much arsenic might be in the fruits and vegetables. However, no tests have ever been performed on any of the agricultural produce.

Government officials have made it clear that they have little interest in mediating the conflict between local miners and farmers in the area. Andrés de los Ríos Luna, the Coordinator for Sustainable Development in the State Secretariat of Economic Development, insists that it is not the government’s job to decide the direction of economic development. “The government only sets the rules and conditions and entrepreneurs chose their activities themselves,” de los Ríos Luna says.

The problem is that the mining laws in Mexico are leftover from colonial times, and a powerful mining lobby works to keep the outdated rules in place. There is no rationality behind the mining rules, says Agustin Bravo, an environmental attorney at CEMDA, a pro-bono legal aid organization based in Mexico City. “It is easier to get a mining concession than a permit for a hotdog stand,” Bravo says.

According to the mining law, absolutely anyone can claim the right on any mineral resources without having to prove economic viability and technical extractability. The government is obliged to grant a concession. Moreover, the government is required to allow temporary occupation rights to the mining concessionaire and even force expropriation on the landowners if they resist. “This is outrageous,” Bravo says. The rules governing the mining industry are very different from any other economic sector, he says. For example, if you are a developer and want to build a hotel, you have to either be the owner of the land or show an agreement with the landowner.

The Mexican Senate is currently considering a proposal to reform the country’s mining laws. If passed, the mining companies will be regulated similarly to other industries in Mexico. They will have to pay royalties for the resources they extract and will be legally required to manage their toxic waste materials for as long as the particular chemical’s lifecycle demands (as is the case with the cement and steel industries, for example). What are the chances of this reform going through? “I am confident we might prevail,” attorney Bravo carefully replies.

Back in the Sierra la Laguna mountains, a few miles from the proposed San Antonio mine, landowner Alma Rosa and her family are up with the break of dawn. Rosa is full of energy. She bosses around her husband Luis, two sons, and three dogs. She is the motor of the family.

Their remote ranch in the middle of a forest does not allow for any large scale, export-oriented agriculture. They grow only enough for the family, plus a little bit to sell locally. The ranch has beehives and two-dozen cows, goats and hens, and the family sells its cheese, eggs, and honey in nearby towns. The family also participates in a local reforestation program that pays them to grow native plants in a nursery and replant them in previously deforested areas. For a little extra money, Rosa makes clay pottery that she sells in a craft shop in El Triunfo.

Rosa is against the mine. She says it endangers the underground water both with contamination and with overexploitation. But her sister is in favor of the project. The sister’s husband worked for the mining company during the exploration stage. They paid him about $800 per month — two to three times more than Rosa’s family makes.

“We live poor, eat meat only from time to time, live on tortillas, cheese and beans,” Rosa says. “But we are healthy — my husband still climbs the mountain, at age 73. If the mine is open, how old will my sons live to be?”

Standing over the wood stove, rolling fresh tortilla dough between her hands, Rosa sighs. “When people hear mining, they see dollar signs,” she says. “I don’t want that money. I want life.