New York Times shocker: The truth about Egypt slips out

In a rare moment of candor, the paper exposes U.S. involvement in the coup -- and then seems to promptly forget it 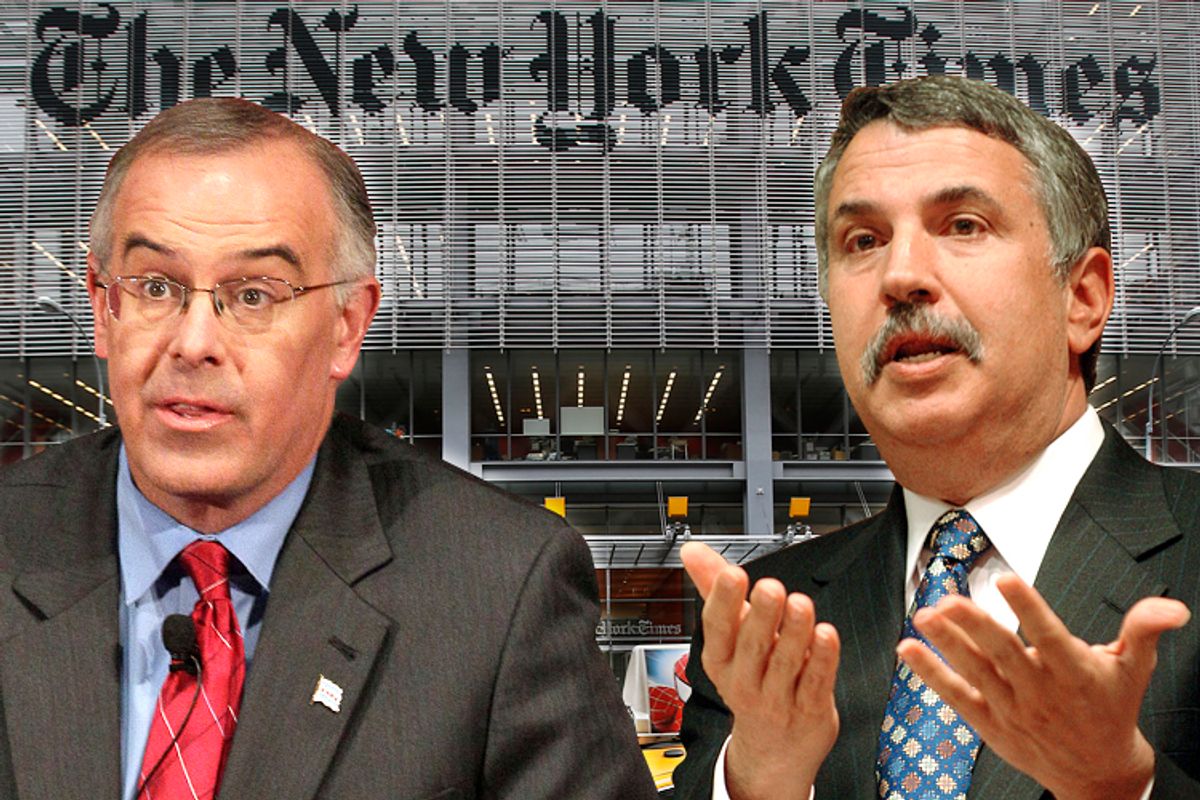 Have you noticed the silence, the casual indifference, of the Obama administration since the Egyptian army shoved President Mohamed Morsi from office in a military coup that gets bloodier by the day? Well, that is what you are supposed to notice.

Barack Obama goes golfing as Cairo descends into violence. Secretary of State John Kerry goes sailing in Nantucket. Neither has anything of importance to say about the events in Egypt — the chaos engulfing the nation. We’re just bystanders, and those poor Egyptians — we hope they can sort themselves out.

These guys play a pretty fair hand a lot of the time, but they have overplayed this one. Anyone who thinks the U.S. is not complicit up to its eyebrows in the Egyptian army’s unlawful coup needs a refresher in our history.

It is now common currency to say that Morsi, who served just a year after he was legitimately elected in June 2012, failed some kind of democracy test. He did no such thing. There was a test, but the failure belongs to Washington. It professes to like democracies all over the planet, but it cannot yet abide one that may not reflect America’s will.

I have not written anything new just now. Just in some of our lifetimes we have Italy’s elections in 1948 (corrupted) and many, many Japanese elections — generations of them. Then there’s the nastier stuff: Mossadegh in Iran, Arbenz in Guatemala, Lumumba, Sukarno, Allende, and so on.

But to say it is an old story is precisely what is so disturbing, not to say disgraceful, about the coup in Egypt and America’s part in it. The Arab world (a quarter of which abides in Egypt) is struggling toward a kind of democracy that will arise from Islamic culture and civilization. This is why the Arab Spring, as it commenced in early 2011, remains so promising. One embraces the prospect of something new.

Morsi made a thousand mistakes. There was political immaturity (hardly surprising after three decades of U.S.-backed dictators), there was the seeking of partisan advantage, there was sectarian exclusion, there was the defensiveness and overcompensating of the Muslim Brotherhood, Morsi’s party, after long years of persecution. Egypt’s first properly elected government was bound to be something of a dog’s dinner, as the English say.

There is nothing so honorable as a statement of policy — Where is Edward Snowden now that we really need him? — but there are footprints galore. There is the nomenclature, for instance. When is a coup not a coup? When it is against U.S. law to support one, and when the White House and Congress want to continue sending $1.5 billion in aid to the Egyptian military. So Egypt has not had a coup, somehow — never mind that the law is being broken. Americans are actually invited to accept this, and many do. It makes you think P.T. Barnum had it right all along.

Now you have to listen to Obama. Here is all he has had to say since Morsi’s July 3 exit: Egypt’s army should move “quickly and responsibly” to restore “full authority back to a democratically elected civilian government as soon as possible.” Can you believe it? Not “the Morsi government,” which of course was civilian and democratically elected, but “a government.” You see where the White House is headed on this?

Hacks like me call minute-to-minute accounts of events “tick-tocks,” and the New York Times did one from Cairo in its edition last Sunday, four days after Morsi’s ouster. I wonder if the commissars are upset. Buried in the details is a plain and simple re-creation of the moments during which Washington gave the Egyptian army authorization to move against its government. I read it, shocked by the momentary honesty in the coverage, and said, “This is a mistake that will not be repeated,” and it has not been.

We ought not get started on the journalism, except that we already have. The media’s cooperation in mystifying the perfectly obvious is not short of stunning, and much or most of the blame must fall, sorry to say, to the Times. Here is a Times correspondent publishing on July 5: “But the flurry of White House meetings and phone calls served to underscore the lack of leverage the U.S. has over Egypt, once a crucial strategic ally in the Middle East but lately just another headache.”

How do these people hold their heads up? It is entirely ahistorical. The media reported Hosni Mubarak’s fall the same way two years ago — as if the U.S. had just realized its 20-year client was in office. We must treat the man to the history text of his choosing.

Now we read that the Morsi government and the Muslim Brotherhood are making “claims to legitimacy” (the Times, July 8). This kind of phrasing is handled like radioactive material at the Times. (I know; I once worked there.) There are no accidents. This is part of how the U.S. intends to delegitimize a legitimate government.

There is nothing personal in this, but we have to end with a consideration of the shockingly bigoted column David Brooks published in the July 5 Times. Morsi, you see, represented democratic process, which I had always thought was a pretty good thing. But no, we must judge leaders on the basis of “substance,” which is to say their values, and they have to match ours. That is how it works.

Morsi came up short on substance. He had the values wrong. These kind of people need to be “investigated” before they are elected. (By whom is not noted.) You see, people holding Islamic beliefs are not capable of governing themselves. Egypt, for that matter, “lacks even the basic mental ingredients” to swing a democratic transition.

In all probability I would not like Morsi personally. But I am for Morsi. I am for his Brothers. They represent the best thing the Arab Spring has yet achieved — the start of an essential process — and the U.S. had no business tearing it down, especially in so underhanded a fashion.