The hate group masquerading as feminists 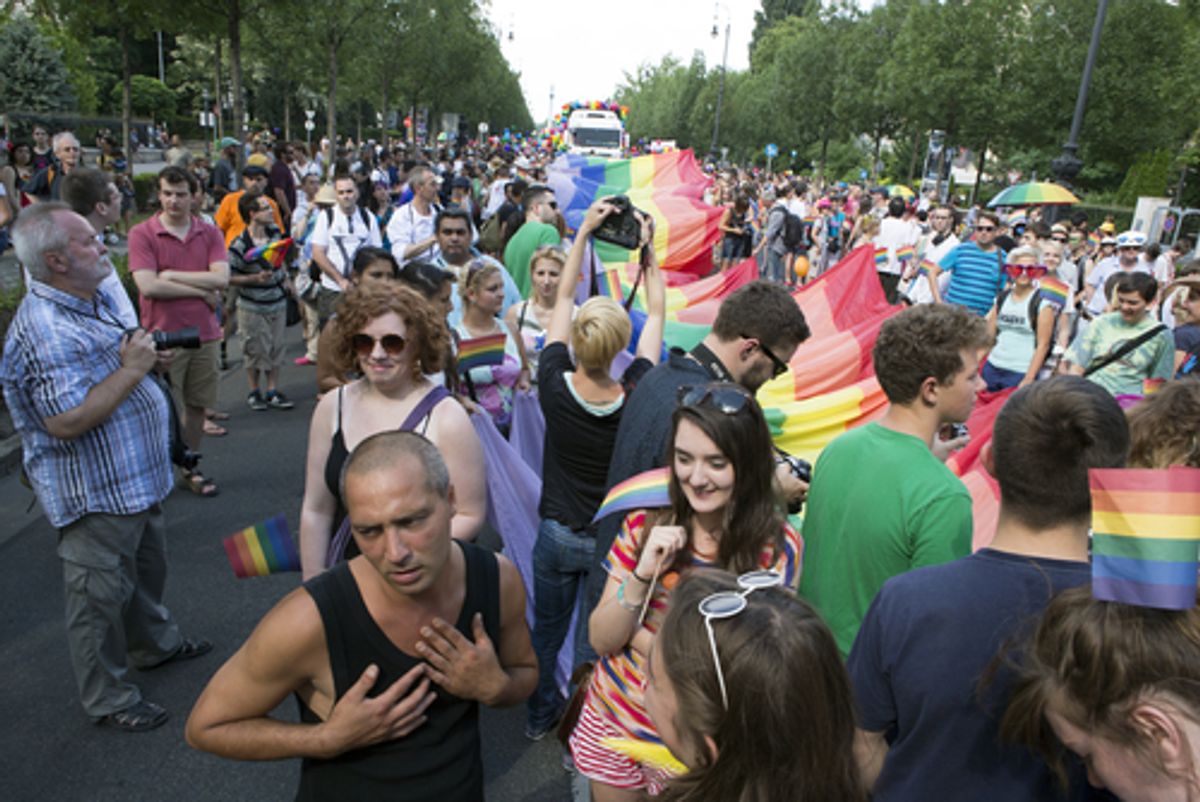 I’m an endangered species. Nearly half of people like me attempt suicide. Hundreds of us are murdered annually and, worldwide, that rate is only increasing. Those of us who have a job and a place to live often lose them both; too many of us can’t acquire either in the first place. What I am is a transgender woman, one of the lucky ones.

I’m lucky because I’m white, and because I have employment, housing and health insurance. I can’t get too comfortable, though, because every few days, a tragic headline reminds me of how fragile we are as a group: “Anti-Transgender Bathroom Bill Passes,” “Transgender Inmates At Risk,” “Transgender Woman Shot.” The world is not kind to us and the news never lets me forget that sobering fact.

In some bizarre alternate reality, however, I’m seen as a villain who invades “real” women’s spaces and perpetuates harmful gender stereotypes. A small but vocal band of activists known as “Radfems” see transgender women like myself as a blight on the feminist movement, but — because their views are not representative of the feminist movement as a whole — many trans*-inclusive feminists refer to them as TERFs, or Trans*-Exclusionary Radical Feminists.

The chief TERF figurehead is a Maryland attorney named Catherine Brennan who once served as a liaison on the American Bar Association’s Commission on Sexual Orientation and Gender Identity. In July of 2012, a petition circulated to have Brennan removed from that position because, to put it mildly, she flatly rejected the “Gender Identity” half of her job description.

Apart from a sordid internet history of harassing, misgendering, and mocking trans* people, Brennan co-authored a letter with Elizabeth Hungerford to the United Nations Entity for Gender Equality and the Empowerment of Women, to argue against — yes, against — legal protections based on “gender identity or expression.” In so doing, Brennan has effectively allied herself with those on the Right who viciously deter trans* folks’ attempts to secure employment, housing and safe public spaces.

Since vacating the American Bar Association liaison position, Brennan has continued to spread her anti-trans* viewpoints at the annual Radfem conference. Every year, the Radfems gather in a “women-only” space to promulgate their politics of exclusion. Every year, however, conference organizers find it even more difficult to book space as people begin to recognize the Radfems for what they are: a hate group.

But the most insidious beat in this nasty narrative has come in the wake of the TERFs’ most recent conference, Radfem 2013 — the TERFs are now painting themselves as silenced victims because of their difficulties in securing space for their conference. Forbes bought into this sob story wholesale. And even the leftist publication CounterPunch has felt the need to cover “both sides” of the issue in a series of articles that debate the legitimacy of transgender identity as if we were theoretical abstractions and not human beings. There are not two sides to a debate about whether a group of people should exist.

Furthermore, if the anti-trans* rhetoric that has appeared on CounterPunch over the last two months were transposed onto gay or lesbian identity, leftists would instantly recognize it as homophobic. If Julian Vigo questioned the existence of “straight privilege” instead of the existence of “cisgender privilege,” she would be instantly shouted down by a chorus of gay-affirmative voices. If she posited that lesbians are “confused” in the same way that she argues that transgender folks “confuse sex with gender,” she would be shown the door at any leftist publication worth its salt.

Let there be no mistake: the only reason this bigotry can proceed unchecked, unexamined and unquestioned in leftist circles is because trans* folks are so vulnerable. We don’t have access to enough avenues for publication, we don’t have enough financial resources, and we don’t have enough political clout to fight back as ferociously as we would like to.  This is bullying at its simplest: pundits of both liberal and radical varieties can demonize us, ignore us, and question our legitimacy because they can get away with it. We are strong and resilient in the face of this pushback; we have to be. But we can’t do it on our own.

We need other radical thinkers to recognize and repudiate anti-trans* argumentation. I shouldn’t have to explain the facticity of my existence in the same way that a lesbian should not have to explain why lesbianism is a viable sexual orientation. But, in the interest of equipping potential allies with the tools to dismantle the anti-trans* arguments that are currently circulating in radical communities, I’ll do myself the disservice of taking their arguments seriously enough to expose their flaws.

With regards to the first point, it takes a particularly twisted calculus to value the politics of representation over the lives of the vulnerable. Just like cisgender women, some transgender women adopt stereotypical gender roles and some do not. To single transgender women out for the perpetuation of gender roles is a leap in logic that can only be explained by a deep-seated, visceral form of contempt.

TERFs despise transgender women so much, in fact, that they end up contradicting their most beloved political commitments in order to reject them. On the Radfem 2013 website, they profess: “We believe that gender is a destructive hierarchy, which harms women and needs to be abolished.” But on the same page, they write:

We welcome radical feminists and those women who want to learn more about radical feminism. It is women-only because we believe that we need to organise autonomously in order to fight for our freedom from patriarchy.

Even as TERFs claim to desire the destruction of gender, then, they cling fervently to a reactionary and reductively biological definition of sex in order to keep transgender women out of “women-only spaces” (see second point above). To combat masculinity and femininity, TERFs paradoxically believe that they must hold fast to an illusory, iron-clad distinction between “male” and “female.” They hold themselves up as the adjudicators of sex difference and act as if they and they alone have the authority to decide who is female.

But, as feminist biologist Anne Fausto-Sterling observes in Sexing the Body:

The shameful secret at the heart of TERF politics is that their commitment to sex difference is actually a commitment to the very thing they want to destroy: gender. Penises are not inherently male just as vaginas are not inherently female. Our bodies are not objective pieces of matter that pre-exist the inscription of social meaning; rather, our “beliefs about gender” inform the very notion that a penis is a male sex organ.

And, indeed, the penis is at the center of TERF politics. One of the most famous images of Catherine Brennan shows her holding a sign, addressed to transgender women, reading: “Sorry about your dick.” Over six decades after Simone de Beauvoir refuted the Freudian notion that “anatomy is destiny,” the folks in Brennan’s camp vigorously defend it in all its reductiveness. It’s past time to stop listening to feminists whose politics have an expiration date of 1949 and it’s high time to start fashioning radical communities into safer places for trans* folks.

I’m an endangered species. I shouldn’t be anymore.